our_route.gpx Open full screen  NB: Walkhighlands is not responsible for the accuracy of gpx files in users posts
It was a red hot sunny day. I was running late, driving along the A86, en route from Kingussie to Glen Nevis - from where I intended to attempt Aonachs Mor and Beag - when I saw a sign for Fersit. Worried I was too late to complete the Aonachs in time to book in to my B&B – and knowing Fersit was the SP for 4 of the Treig/Ossian Munros - I decided to cut my losses and exit the A86. My only problem was that although I’d planned to do a couple of these hills the following day, I’d done no prep. I did however have a print of the WH guidance notes and the necessary 1:25k map, so I decided to try Stob Coire Sgriodain and Chno Dearg.
On reaching the car park at Fersit, the first thing I noted was the absence of the phone box referred to in the WH note. It’s been gone a while apparently, but Fersit being smaller than Florence, I was still able to find the cottages and railway bridge leading to the forestry track to the hills. After about 300m, I turned S on a cow dung strewn path between some sheep pens and a shed, to cross the boggy, tussocky ground which leads to the steeper slopes of Sron na Garbh-bheinne. In the heat and humidity, it was a gruelling slog up the steep, increasingly rocky terrain approaching the summit. I ended up scrambling the final approach, rather than spend time seeking an easier route (let alone a path). Looking back, I thought a better way up, may have been to continue E along the track to ascend the E bank of the Allt Chaorach Beag and swing SW to the summit of S na Gb.
From S na Gb summit however, fabulous views open up to the W and S along Loch Treig. 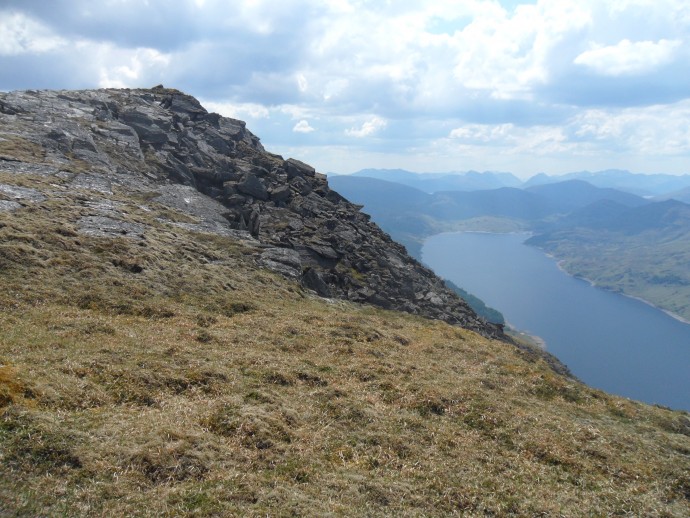 S towards the summit crags and down L Treig

I heard an almighty crack and looking down to my right, caught a fleeting glimpse of a fighter jet skimming the waters below. I continued along a narrowing ridge to climb the buttress summit of Stob Coire Sgriodain. 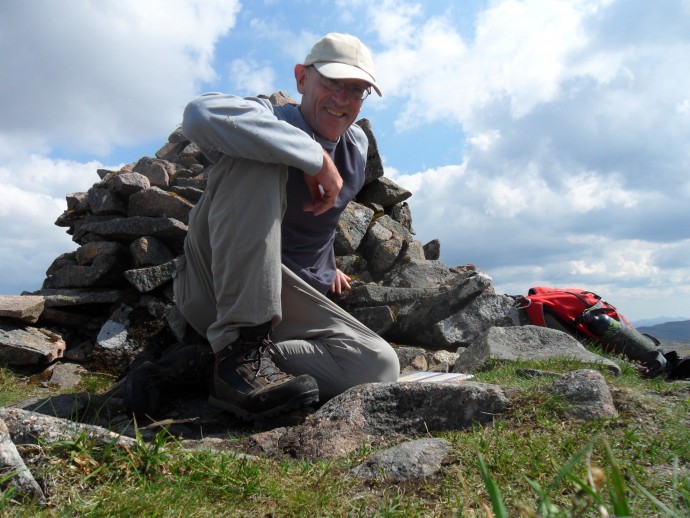 At 979m, this was my 1st Munro of the day. The views were spectacular –S down L Treig, SW to Beinn na Lap, W to the dramatic cliffs of Stob Coire Easain and Stob a’Choire Mheadhoin, E to the lump of Chno Dearg and a 360 degree panorama to the numerous ranges beyond. 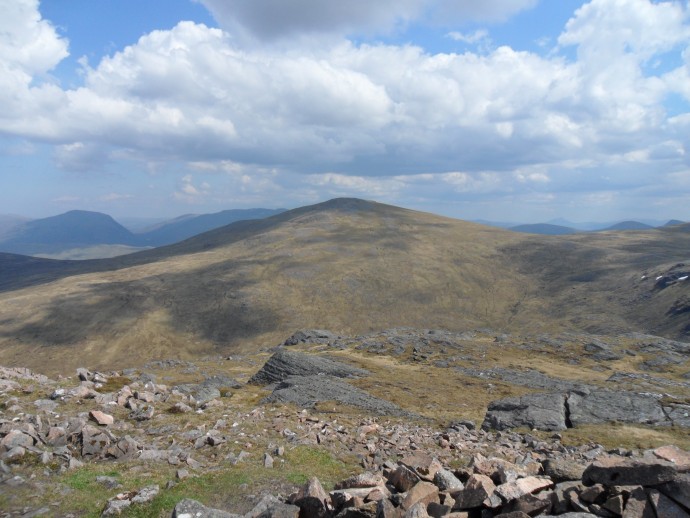 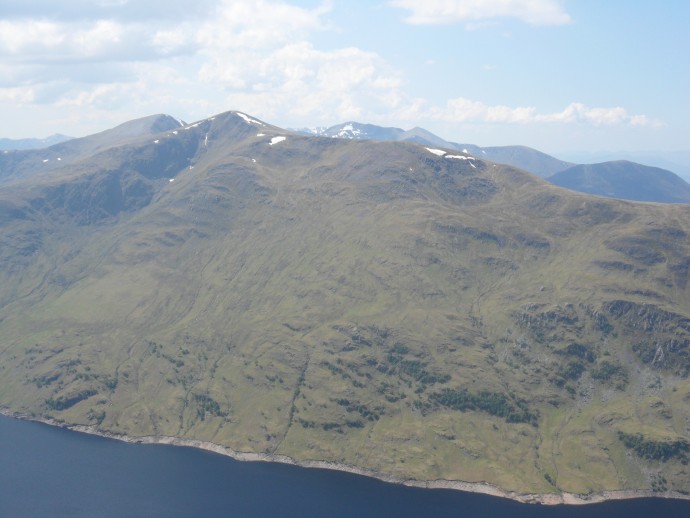 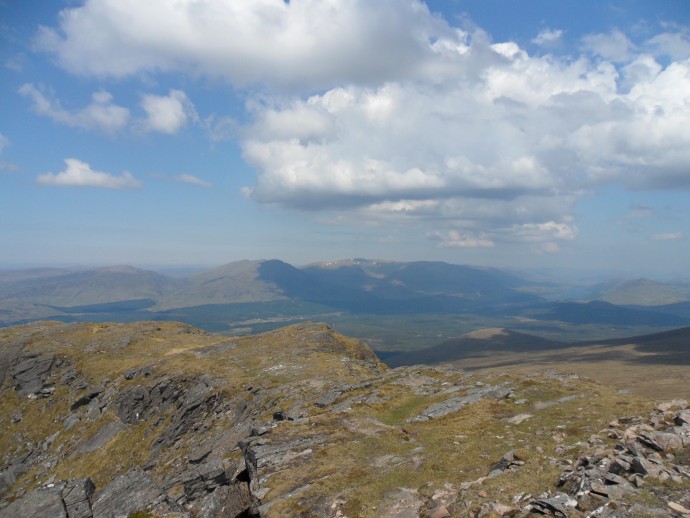 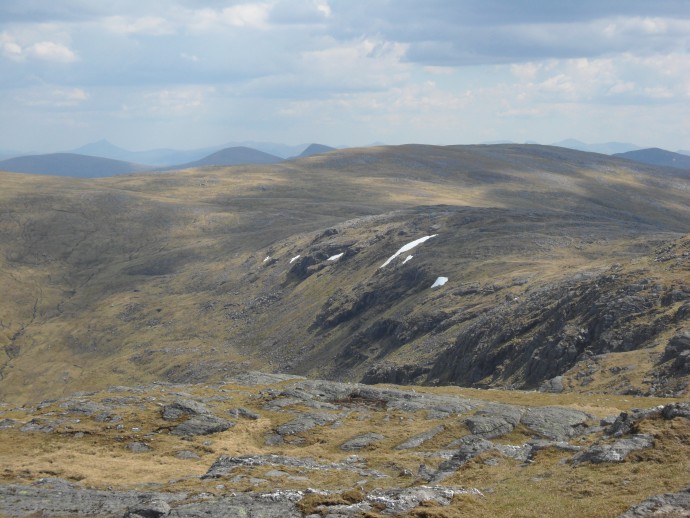 Beinn na Lap in the distance? 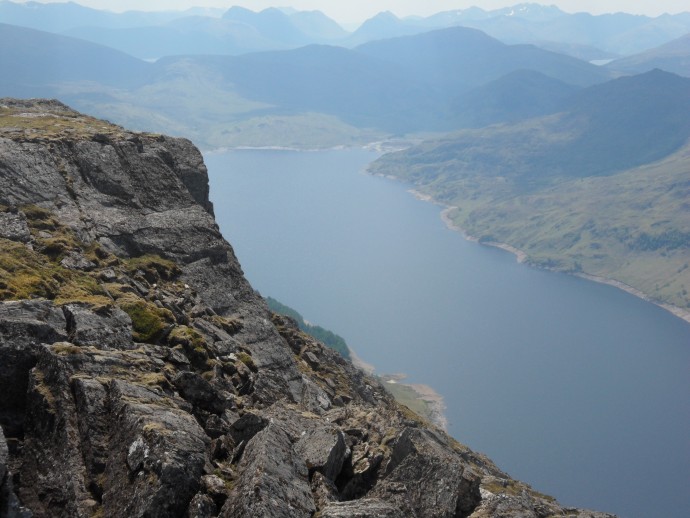 From the cairn the path looked like it led straight over a cliff, but further examination showed it to be a steady descent S then SE, down the steep grassy then rocky slopes of Glac Bhan. 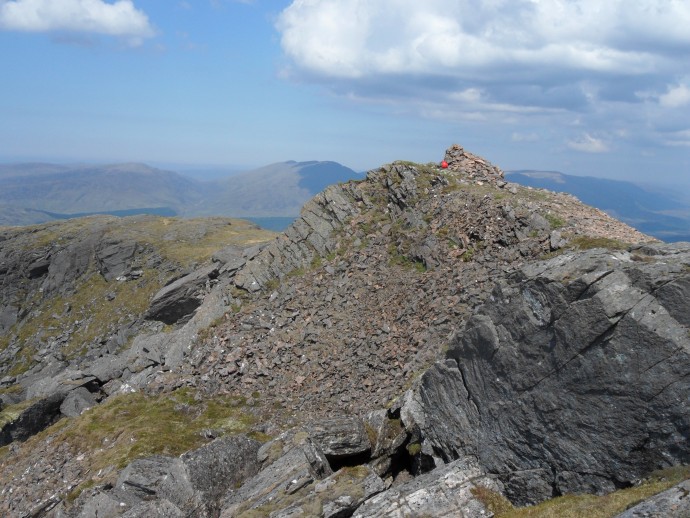 looking back from Glac Bhan

At times the path faded, but each time it did I was able to pick it up again without difficulty. After about 700m I swung E to join the SE ridge of Chno Dearg. From here I climbed steadily over tussocky grass, then a boulder field, to access the summit ridge. A short walk took me to the cairn of this 1046m Munro to enjoy the views of distant hills. 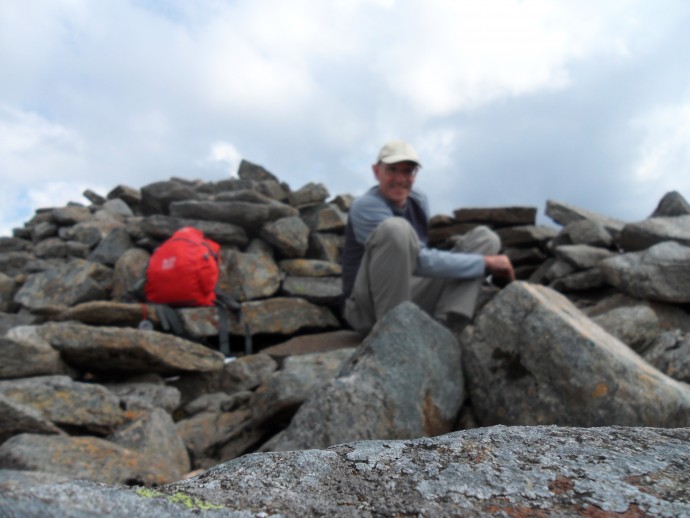 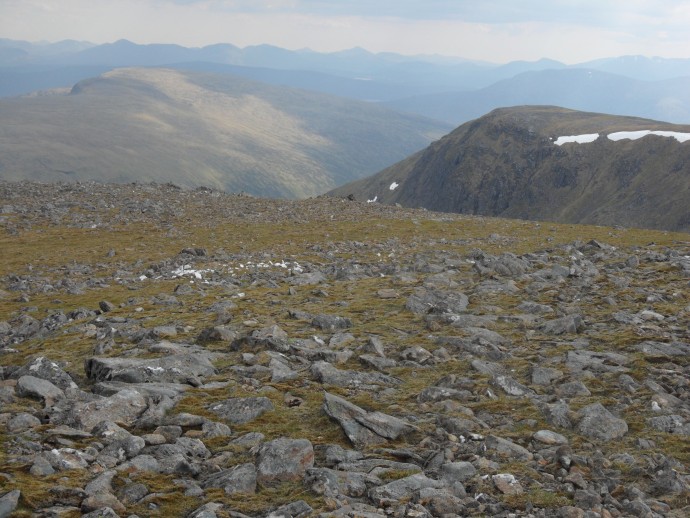 After a short comfort break, I set off down a faint path for my return. The path soon petered out on the initially stony ground, so I took a bearing for the sheep pens and set off along it. I managed to avoid the crags to the W, but even after a week of dry weather, the lower reaches remained marshy. Though hot and sweaty (too much info?) at this point, I wasn’t too tired. Despite the uneven, boggy terrain I had kept up a good pace, but it was 5k (as the crow flies) and I did find it a bit gruelling after a while. Once through the cow pats and beyond the pens, I had an easy walk back down the track to the start point.
I really enjoyed the day – and not simply because I’d salvaged a walk after missing out on the Aonachs (which I did the following day). Chno Dearg may be seen by some as as a boring ‘lump’ but it still nicely rounds off a good day’s walk - which includes spectacular views from the more rugged Stob Coire Sgriodain.