Great Mell and Clough Head - a pair of farewell fells

Great Mell and Clough Head - a pair of farewell fells


The day of moving north had arrived.

After eight weeks of living in a spare bedroom of a very understanding daughter and her tolerant household in Hampshire we were finally getting the keys to our new house in Scotland.

It must have sounded as casual as going to get some milk from Sainsbury’s on the way home from work.

But no, there was a pair of unclimbed fells worth a quick detour off the M6. I’d driven past the dome of Great Mell Fell too often, and I’d done it’s little brother a few years ago: an hour at most. Then there was Clough Head, sat at the end of the fells running north from Helvellyn. A couple of hours would see off the end of the line that had failed to fall to the son-in-law and I when we ran out of steam a few years ago after collecting the clutch of Dodds that precede it. With the car tucked up the lane before Brownrigg Farm I passed one gate, from which the path beyond would bring you back to where you started. Once through the second gate, as the track emerged from the woodland, it was just a case of heading upwards as a variety of paths laced their way to the summit. A few wind-blasted trees provide passing interest and an expanding view to the north of Blencathra is revealed as the grassy slopes rise to the unassuming cairn.

Wind-sculpted tree - one of many

Behind, to the south and west, the geography and layout of the nearby Lakes is spread out, with plenty of time to pick out familiar fells on the easy descent back to the car. It was a thoroughly enjoyable wander and one that may well be repeated when an hour or so is spare on future visits.

I resisted the temptation to cross from Great Mell Fell to Clough Head and opted for the car through Threlkeld and down to Wanthwaite Bridge. Just enough space to squeeze the car off the road and I was away again. 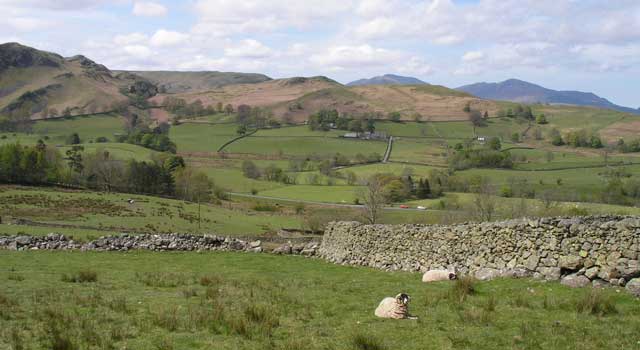 Looking back down to Wanthwaite at the start of the walk

A midweek jaunt meant that the cycle / 4x4 track was mercifully empty, making the walk up past the quarries to Hause Well a pleasant stroll. Blencathra brooded across the valley, a distraction from the steepening slope stretching upwards to White Pike and Clough Head beyond. Soon enough the stile gaving access to the climb hove into view.

Blencathra and the path to Hause Well

The 200m was soon gained and the slope above rose gently, giving access to the cairn on Clough Head in no time at all. It was a surprisingly effortless ninety minutes, made all the easier by being able to travel light; pockets sufficed for all that had been needed today. Within an hour I was back at the car having left the only other person I met on the top departing for the various Dodds on the ridge beyond. I descended along a clear path that cut back across the screes below the top before heading more directly to the quarries below.

A bigger journey lay ahead: a crossing of the border in our move to Scotland. As I worried about Pickfords managing to ferry our goods and chattels safely out of store, I pondered on the prospect of future trips to the Lakes: by moving to Scotland I’d still be nearer to the Lakes than I had been before.

Great stuff OD, any time you are passing the lakes is always a good time to pop in

fantastic to have the place almost to yourself too, that just adds to the enjoyment. Love that shot of the wind sculpted tree, it reminds me of so many trees on the coast in Cornwall.

A nice way to break up a journey from Hampshire to Scotland, OD. Those two hills are great viewpoints.

I am sure you will venture South again Nigel, Good luck with the move to Scotland.. Looking forward to reading your reports