Just a week and most of the boxes had been unpacked. The house was no longer in absolute chaos, and we’d almost managed to decide where everything was going to go: it was just a matter of putting them there. There’d been no breakages and the missing mirror had been located having been helpfully submerged between a rail full of winter coats that we were confident would not be needed for a while.

So, for the very first time, I faced the prospect of being able to head off for some Munros when the weather looked promising and knowing that I could be home for teatime. Such indulgence.

With the last serious leg-stretch being back in those balmy days of March in Kintail, I fancied the luxury of a high start and some high level walking between tops. East of the Cairnwell seemed to offer it all. I could leave those to the west of the ski centre for claggier days when the views of lifts and pylons can come fleetingly in and out of the mist rather than be constant companions.

A handful of cars had already gathered at the pull-in just below the pass and in no time I was away over the old bridge and up the path towards Carn an Tuirc. I can get used to this proximity I thought. 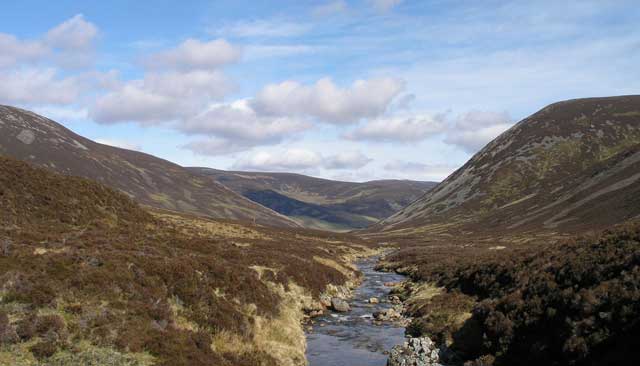 Looking down Glen Clunie from the old bridge

Whether it was the high start or fresh legs I don’t know, but the direct route up the boulders felt fine and within ninety minutes I was on the top and surveying significant parts of the day ahead. Snow still blanketed the Cairngorm tops in the distance, but here the occasional stretch was fast-disappearing as the day warmed up.

Distant Cairngorms from Carn an Tuirc

Cairn of Claise looked an easy trek across the intervening ground and, but for the softness of the patches of melting snow that still had to be crossed, would have been made well within the half hour. As it was, wet feet and surprisingly tired calves were in need of a rest at the top. 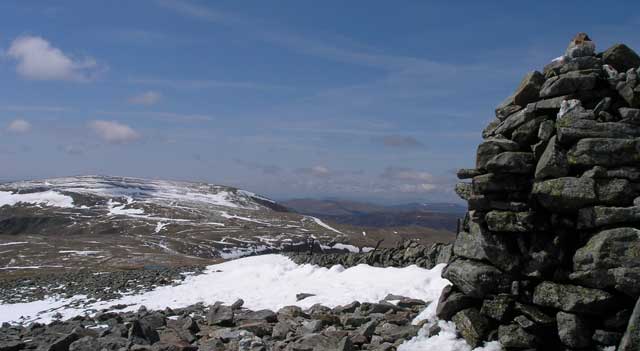 Glas Maol from Cairn of Claise

Until now, the loop out to Tolmount and Tom Buidhe had been an optional extra on the agenda. However, once I’d finally picked out their rounded tops from the background slopes beyond, I realised the foolishness of any such omission. Contouring back round to take in Glas Maol, one of the other optional extras for the day, looked fairly straight forward. So, east it was.

Not the most impressive or spectacular of hills I’ve ever been on, nor were they the best starting off point for the next bit of the day. What I’d envisaged as a routine bit of contouring round to avoid revisiting Cairn of Clasie turned out to be a seemingly never-ending squelching trudge. At one stage all possible points of reference had disappeared behind one horizon or another and despite brilliantly clear weather I began to question either my sanity or my route-finding ability. 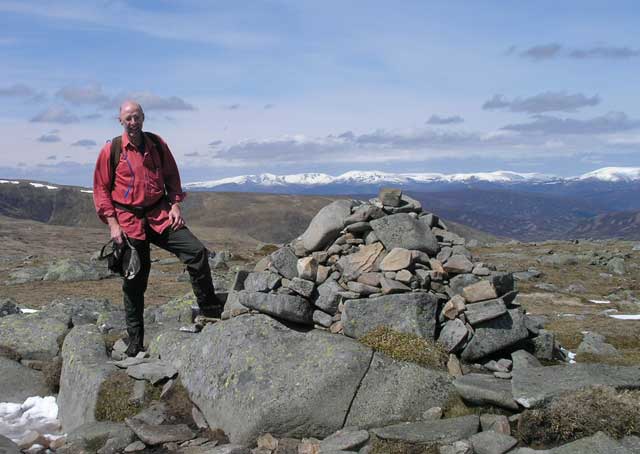 OD on top of Tolmont 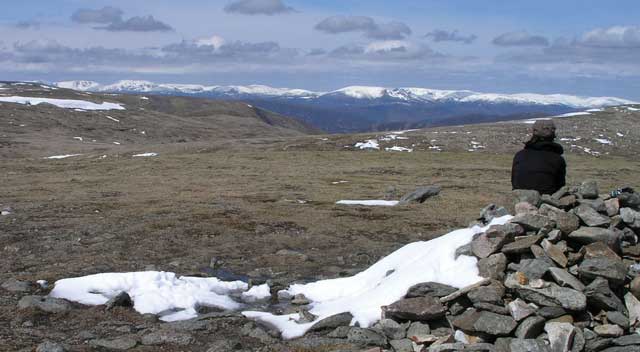 Suffice to say, I’d misjudged the time it would take to cross such ground and with hindsight it would have been quicker and taken less effort to regain Cairn of Claise and then follow the better higher ground to the bealach between it and Glas Maol.

By now Glas Maol had already been mentally been ticked off and thoughts were turning to the possibility of finishing with a flourish and adding Creag Leacach to the day’s tally. The prospect of a walk back up the road and over the pass didn’t really appeal. But hey, there’s always the thumb and an optimistic faith in the goodwill of fellow walkers. 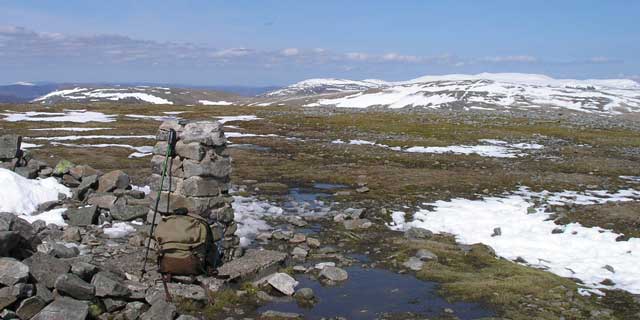 So, with the first signs of cramp appearing as Glas Maol was crossed, I was reassured by a couple that a path headed back towards Meall Odhar from the large cairn at the beginning of the ridge towards Creag Leacach. Peanuts, a banana and more water saw off the cramp and soon I was enjoying the final scrambles to the top of the sixth and final Munro of the day: a curiously rugged contrast to the rounded humps of the previous five.

The return, as promised, proved perfect, and a far cry from the tortuous earlier contouring round. The faintest of tracks leads just west of north from the cairn and became the most enjoyable and driest of the day as it passed just below the top of Meall Odhar.

At this point two things threatened to spoil the whole experience. The ski-centre tracks that scar the hillsides were an unavoidable and accepted part of the day. But more critically, perspective played the cruellest of tricks. As I looked back to Creag Leacach I had that sinking feeling that I hadn’t topped out on the actual summit. The ridge beyond reached round and looked for all the world just that fraction higher than the top I knew I’d been on. A frantic check on the map and the log on my GPS reassured me that I didn’t have to go back. 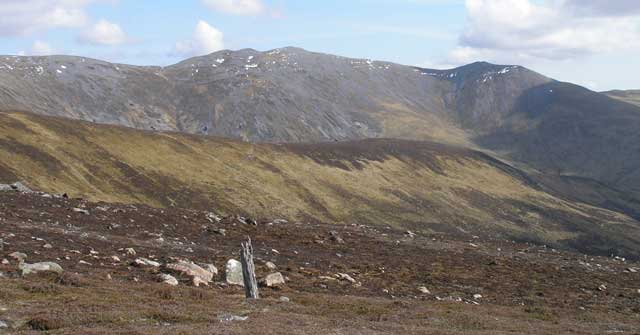 Is that other one bigger? Looking back to Creag Leacach

All that remained was the tarmac back to the car and an indulgent revel in being able to be back “home” for tea by eight o’clock.

Great day, great weather, six more Munros – and I’ve only lived in Scotland for nine days. Any less in the future and I’ll be wanting my money back.

Moved to Scotland - envious!
Nice long walk to bag 6 in one go, but only 7.5 hours. Might have to consider these next time round.

Great stuff OD glad the move went ok. See you in the hills (or the green welly) sometime soon

Well done OD! I done these 6 a few years back and as you say they are not the most exciting Munros but still a good day out.Also,welcome to Ayrshire!

Glad you are enjoying life north of the border , it will be a nice feeling being able to climb a couple of hills without it being a major expedition up the motorway , Cheers