The forecast was not promising. MWIS had a less than 10% chance of clear summits, the prospect of rain and a brisk wind.

Unfortunately the forecast was accurate and so there are not many photos to share I am afraid. I have been up Ben Wyvis twice before and did not have a view on either occasion. Today was going to be no exception. However, the purpose of the climb was that of top bagging, namely Glas Leathad Beag, which lies 4km off to the north east of the main summit.

I had considered approaching from the east, up Glen Glass but that would have meant buying another map as the edge of OS20 inconveniently cuts off the far eastern part of the Ben Wyvis massif!

On this walk I was to be accompanied by my brother, Peter. When I had last climbed Ben Wyvis the start point was through Garbat Farm along the right of way that runs over the col between Ben Wyvis and Little Wyvis. The path here was normally quite squelchy as it made its way through the forest. Now, however, there is a purpose built car park about a kilometre to the south from where a fine path leads you along the Allt a’Bhealach Mhor and intersects with the right of way at the foot of An Cabar. So we set off at around 9.30am. The weather was pleasant, mild with a slight breeze. There were even some breaks in the cloud. The path leads up at an easy gradient never far from the river. On breasting one rise a remarkable sight came into view – that of Ben Wyvis. What of that you may say. Well have you seen Ben Wyvis quite like this? It was literally wrapped in a blanket of cloud, its shape clearly discernable. The wrapping soon broke up and the rocky shoulder of An Cabar penetrated the cloak.

Ben Wyvis is clearly a popular mountain. The path is well engineered and bouldery steps have been created in many places to ease the erosion. You are led swiftly upwards and, in our case, into the cloud. The bulk of An Cabar still provided some protection from the easterly wind but 30m from the top I was forced to put on the cag to protect from the elements. I reached the An Cabar cairn at 11.20am. 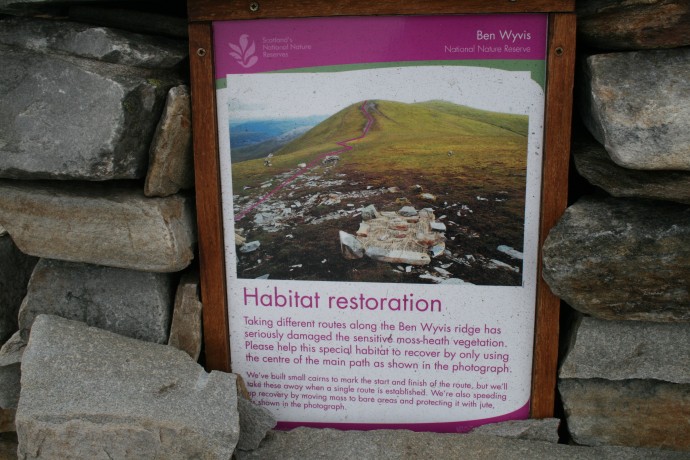 The summit ridge of Ben Wyvis is exceptionally mossy. I did as instructed by the sign. In the mist with about 20m of visibility, the summit seemed to take an age. I understand that there are good views east to the coast and west towards the Fannaichs, An Teallach and Beinn Dearg – but not for us today. I reached the summit at around 11.55am. I hunkered down behind the shelter for a bite to eat out of the easterly wind and the dampness of the cloud. The shelter looks out to the east, no doubt to protect from the prevailing winds. So I sat outside facing north west. Peter followed a few minutes later. He was just bagging the main summit. I plotted my way onwards. He returned the way we had come.

After 30 minutes at the summit I headed off. It is possible to contour around Tom a’Choinnich and I set a bearing for the top of the stream at NH467700. I hit it spot on. A bank of snow remained there feeding the sluggish water oozing from a spring beneath. Damp permeated the air and the ground. I climbed north for a few minutes and hit a track running down the north east ridge of Tom a’Choinnich. The ground again became very mossy, but a delight to walk over. It was just a shame that I could see no further than my immediate surroundings.

So it was onwards, stopping to recheck bearings at each feature and counting paces to double check my location. Finally a wall of green appeared and there was 90m climb up to point 910. Then there was a final kilometre wander to Glas Leathad Beag and its paltry cairn. I guess that there are not enough rocks round about. I arrived at 1.40pm. The track I had been following along this last section veered off to the left of the top so I needed to correct. There was also sign of damage to the fragile surface by ATV tracks – a shame. So it had taken me about an hour and twenty minutes to reach the furthest point – another subsidiary top bagged. Now it was a question of reversing the route over Tom a’Choinnich. Having teased me with a slight clearance the cloud started to drop rain on me. It was actually quite wetting. On the ascent I saw a herd of goats some way to my left. Having reached the top of Tom a’Choinnich I then took the fabulous stalkers path down the north west slopes. Just as the zig zags came to an end I headed south on to the ridge between the Coire Dubh and Coire Tom a’Choinnich. This I followed for a bit before descending towards the Allt Tom a’Choinnich. After a while a faint path appears above the true right bank of this stream. It was relatively dry when I did this walk but I can imagine that it can be quite boggy. It takes you down to the forest. Extensive felling has taken place to the north of the stream. There is a substantial gate at the edge of the forest (or where it used to be) and the path continues to where a forest road crosses the stream. From here there is a choice of routes back to the car park which I reached at 4.40pm.

Another fine report CL and enjoyable read even with the conditions preventing long distance landscape shots, I think the walk may have been worth doing just for that first glimpse of the hill blanketed in cloud, what a beautiful sight that must have been 'live' so to speak

Shame about the weather, but that cloud photo is fantastic

ChrisW wrote:Another fine report CL and enjoyable read even with the conditions preventing long distance landscape shots, I think the walk may have been worth doing just for that first glimpse of the hill blanketed in cloud, what a beautiful sight that must have been 'live' so to speak

PeteR wrote:Shame about the weather, but that cloud photo is fantastic

Yes the cloud was an interesting phenomenon. We were lucky to see it because it had broken up a short while after I took the photo.

That pic of Wyvis blanketed in cloud is amazing!

Good report, shame about the day. Wyvis was my first hill and it was the same conditions, we bashed on to Tom a’Choinnich then came down and bashed through the forest back to the car park.

That cloud picture is unbelievable

The rest of the report isn't bad either