Despite visibility down to about 50m all day and very wet underfoot after a night of heavy rain, I found this an excellent circuit walk, especially the return leg along the ridge.
I headed out anti-clockwise along the east side of the Loch Turret Reservoir to Ben Chonzie (931m) and returned along the western ridge via Meall na Seide (753m) and Carn Chois (786m) - route map at end. 5.5 hours walking, 7 hours in total including tea, lunch, photos and playing with my GPS and maps. Fortunately there is a good fenceline to follow from the summit (though a bit dilapidated), it was however very useful to have my GPS with the route pre-loaded on it from a WH blog to check on the 1:25,000 OS map where I was when I headed off the fenceline after Carn Chois. I would be happy to go back again and walk the circuit clockwise, preferrably on a clear sunny day when the ben is visible !!

360° panorama from the summit of Ben Chonzie.

Not all mist, there are some pics with a bit of the landscape in them !! Ben Chonzie is up there somewhere, best view of it I had all day !! 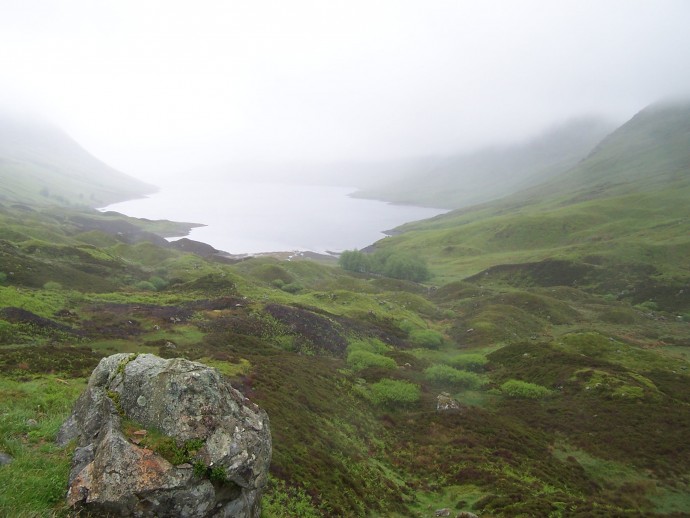 The View back from below Lochan Uaine. The final short scramble up a boulderfield to the start of the summit ridge. Finally out of the mist appears the summit shelter. Thank goodness for the old fenceline on the descent to Carn Chois. A misty self-portrait, just remembered my camera has a timer setting !! At last after a short scramble, through the mist appears the trig pillar on Carn Chois. Not much to see beyond the trig pillar. Amazing difference dropping down 250m can make - out of the mist appears the reservoir. Louds cheers from behind as a group from Morrison's Academy, Crieff also spot the water. Still no sign of Ben Chonzie as I look back. Nearly stood on this Oyster Catcher's nest with a clutch of eggs.

End of walk 5.5 hours walking, 7 hours in total including tea, lunch, photos and playing with my GPS and maps.

ChonzieMIke.gpx Open full screen  NB: Walkhighlands is not responsible for the accuracy of gpx files in users posts

Love the pic, findornloon! I got stick on here last year for saying Ben Chonzie was boring, but I guess you didn't get to find out. Actually, I did the exact same circuit as you on a beautiful sunny day and I really enjoyed it. Not much character to Chonzie but the walk itself is excellent and very scenic. The return leg over those lesser tops is excellent. One thing which puzzles me - how did you navigate this in that sort of visibility? Even with the fence posts I'm positive I'd get lost.