Foel Goch and the Berwyn Bogtrot

Foel Goch and the Berwyn Bogtrot

Another weekend to be spent chasing my remaining Welsh Hewitts, and I had two choices of destination. One involved using the train and cycling lots with a heavy bag, and the other required a hire car. Having knackered my shoulder recently, I went for the hire car option, as that would only require a light day sack, leaving the cycling and heavy load lugging until I’d regained some strength there.

I collected the hire car at 9am and set off for Wales. The order of the walks was dictated by the time, leaving the long one for an early start on the Sunday, and doing the short one on Saturday afternoon. Before that, however, I had Foel Goch to take care of. Barely high enough to qualify as a Hewitt, it had slipped off my agenda numerous times before. I had meant to climb it from the north side, which was the most convenient approach from my parents house, but the slightly longer southern approach suited my drive from Shropshire better.

Foel Goch.gpx Open full screen  NB: Walkhighlands is not responsible for the accuracy of gpx files in users posts
The half-term traffic was heavy, and it was 11:30 am by the time I was parked up at the gate for Pentre farm. There’s only really space for a single car here, but luckily no-one else was there. There isn’t a great deal to say about this hill really – with mist on it and most of the surrounding summits, it was fairly forgettable. I followed the tarmac road through the gate up to Pentre farm, then the footpath signs diverting me round to the right of the buildings, before picking up a good path on the eastern bank of the Nant Cwm-da. This crossed a bridge after a short while, then the going got boggier for a bit. Re-crossing the stream took me up the back wall of the shallow grassy valley, the path less distinct here. Once on the col, it was a short walk to the summit trig point which was mostly in the cloud.

The cloud almost blew clear a few times, but all of the other hills were well covered, so the views were limited. There were some spots of sunshine in the Dee valley though. I made a slight diversion on the way down, coming directly down the SE face before rejoining the outward route. Not a bad little wander, but I was glad I hadn’t ended up with it as my final Welsh Hewitt! 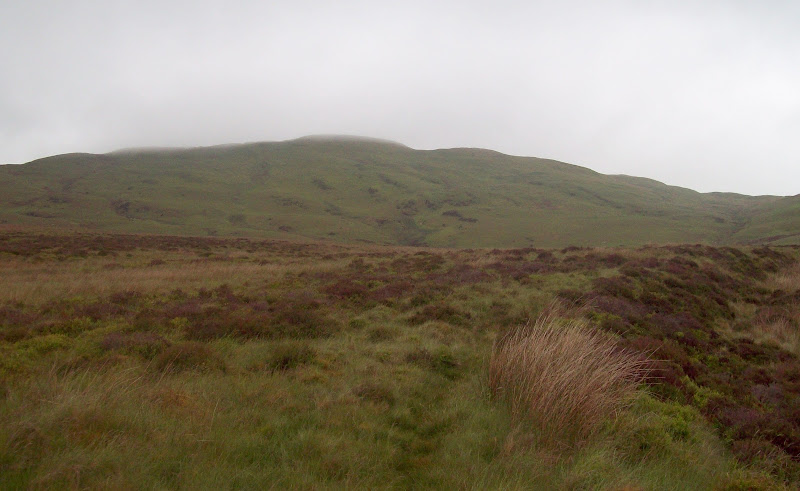 Sort-of views from the summit: 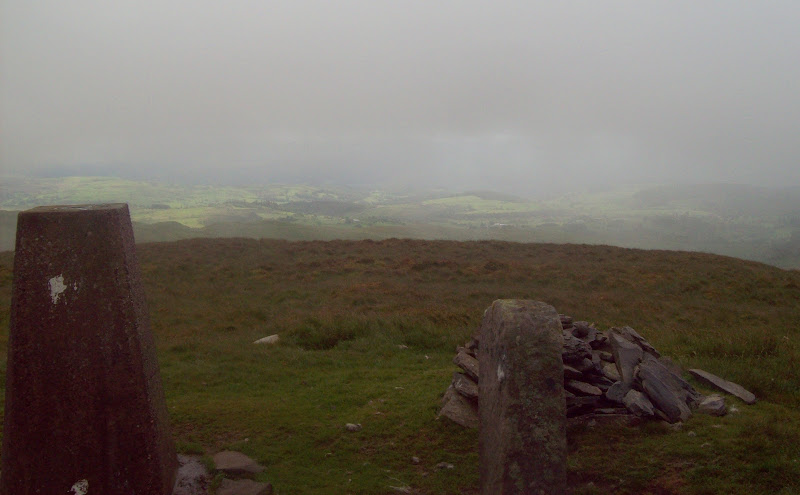 Across the Dee valley to where the Berwyns would be: 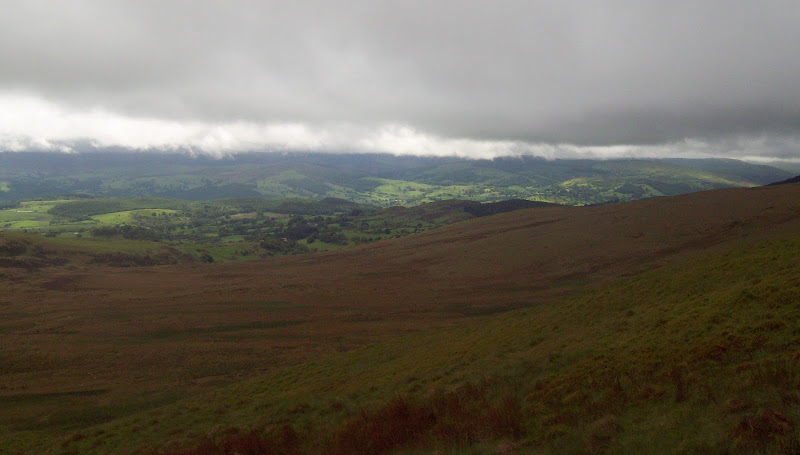 Next were a trio of hills I had considered cycling to at one point – a 40 mile round trip from Gobowen railway station. After today’s circuit, I was glad I had never done that, as it would have been a very long day!

I found it hard to work up much excitement for these hills, as they were featureless heathery humps, which are typically climbed by more straightforward ways. However, I felt that I had managed to devise a route which would make them interesting. This would give good views down Cwm Rhiwarth and Cwm Pennant, and take in a couple of waterfalls.

Llangynog.gpx Open full screen  NB: Walkhighlands is not responsible for the accuracy of gpx files in users posts
I parked in the centre of Llangynog and headed towards Craig Rhiwarth. I had been round the base of this years ago on a walk over to Pistyll Rhaeadr and Cadair Berwyn. This time I decided to take it head on, and weaved a way up between rocky outcrops and quarry workings. 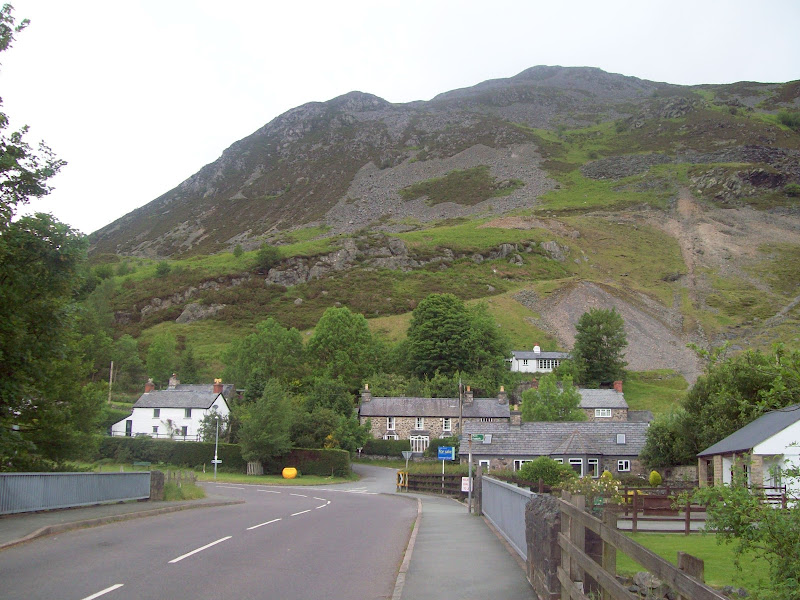 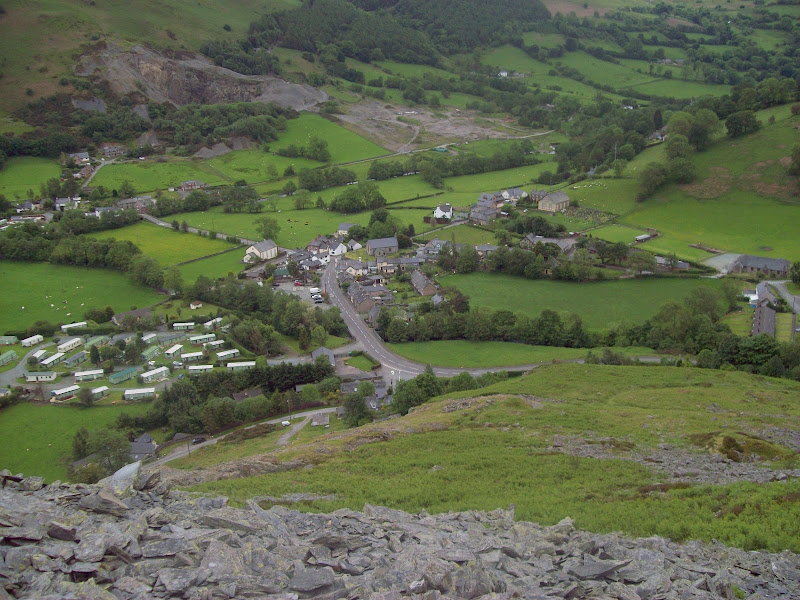 There were paths of sorts to follow most of the way, with just the top being harder going. There is an iron age fort here, with little to see close up. The surrounding wall can be seen from a distance, but is not very obvious when you are trying to find it. I passed a guy and his son up here, who had climbed up from one of the caravan parks. They were off back down to catch the football on telly. 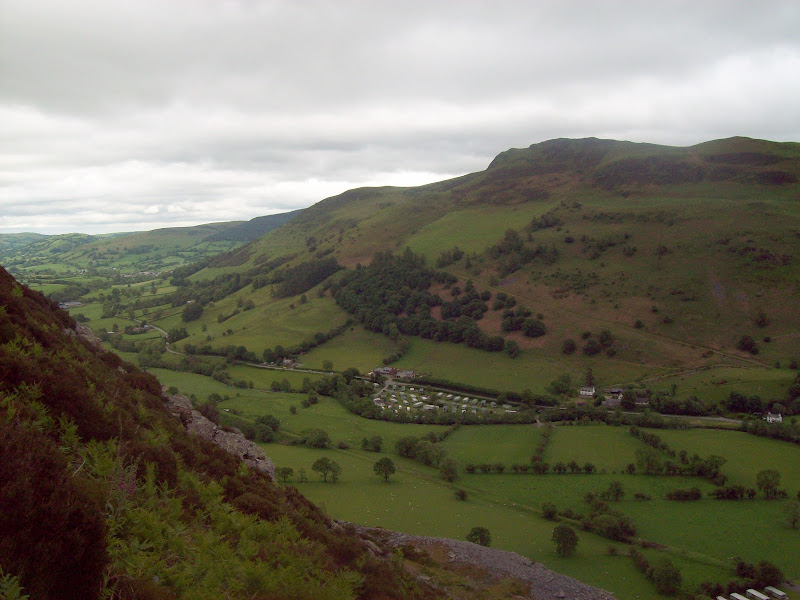 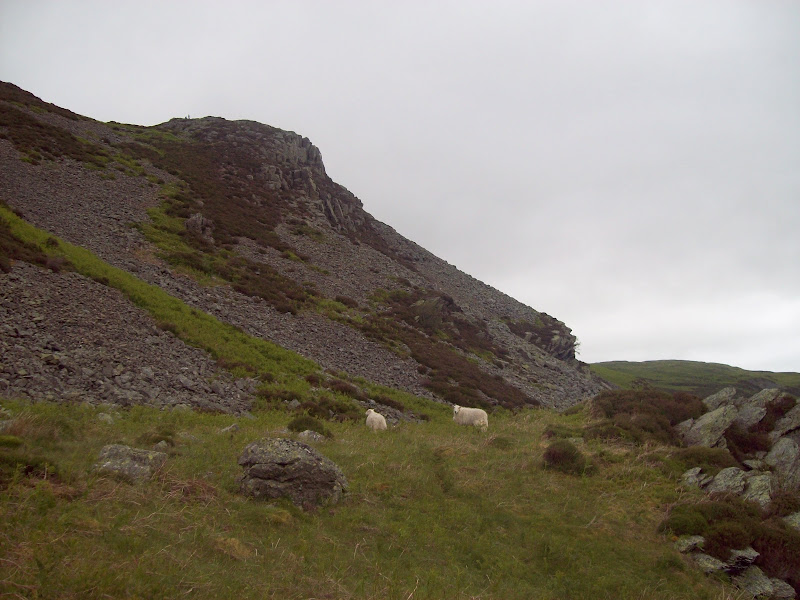 The north side of Craig Rhiwarth was much less rocky, and I was soon down to the col. Good views up Cwm Rhiwarth opened up, as well as a less exciting view of Post Gwyn, my next objective. 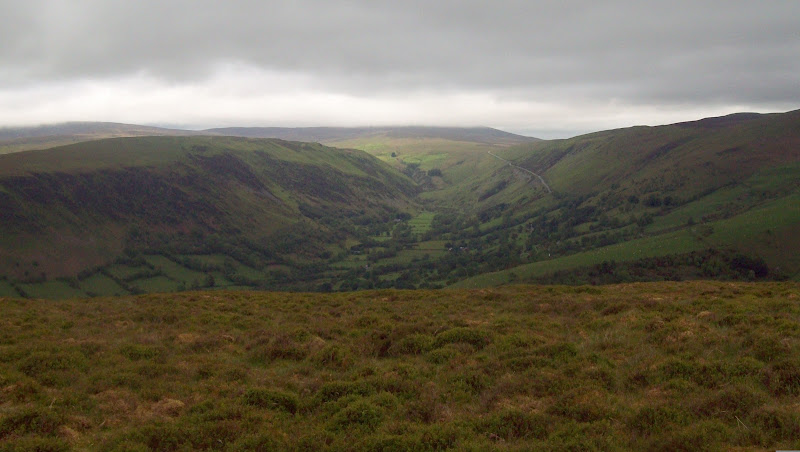 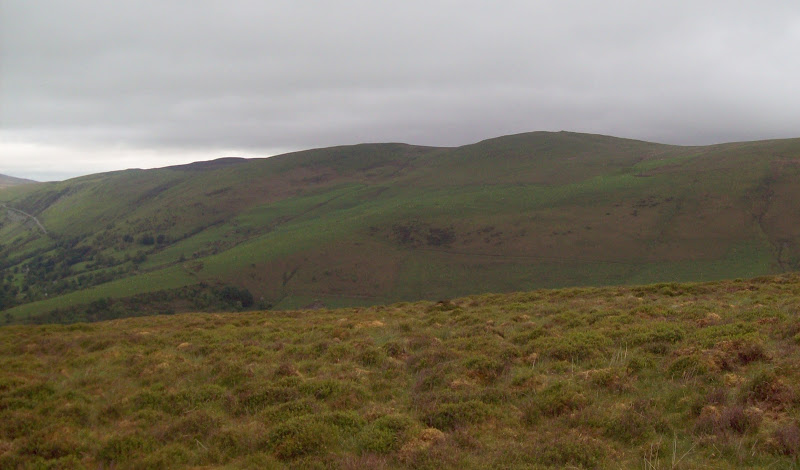 I climbed a couple of fences, and before long was on a track which gained me most of my height. This turned off to descend to Pistyll Rhaeadr, and I followed the ridge NW to Post Gwyn. There was little evidence of a path, but the going was easy, with short heather and grass predominating. 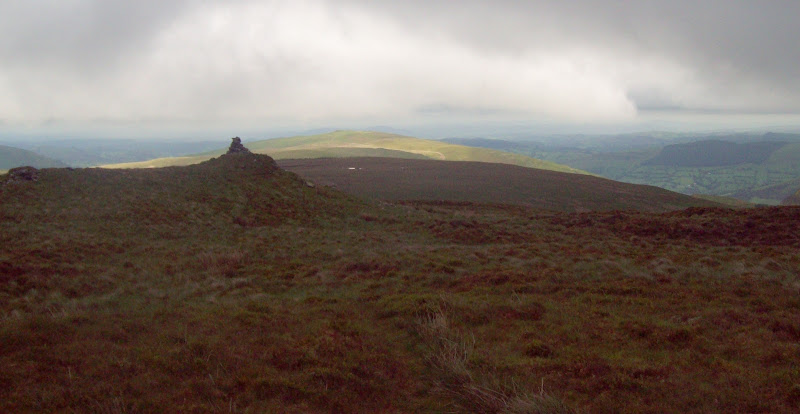 Immediately on the other side of the summit, the going got tougher. The Berwyns specialise in a particular type of knee deep tussocky heather which is agony to walk through (like wading through soft snow), and this stayed with me most of the way down to the road. Some useful advice – if you don’t like this stuff, don’t try and climb Post Gwyn from the west!

As I got closer to the road, the slopes got steeper, and I was able to have a break overlooking the head of Cwm Rhiwarth. As I had hoped, the view down the cwm was good. On top of that, the persistant heavy rain through the week made the waterfall at the head of the valley impressively full. 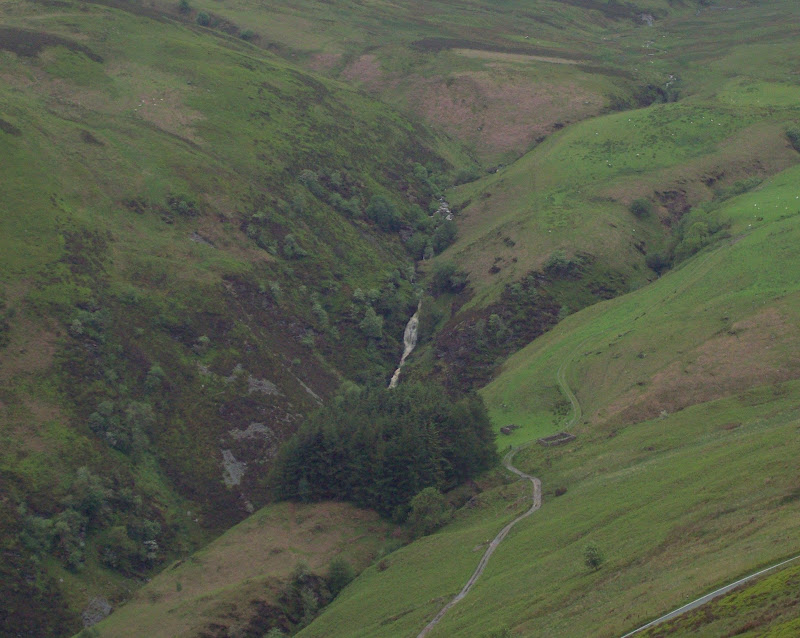 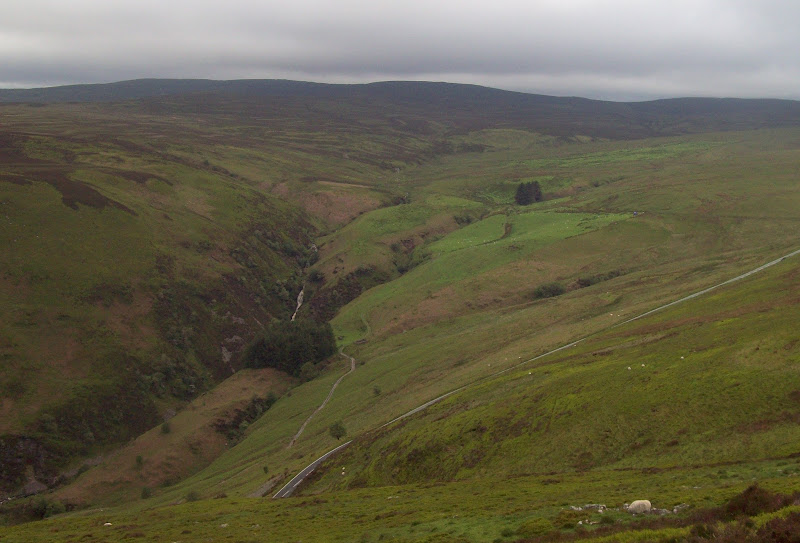 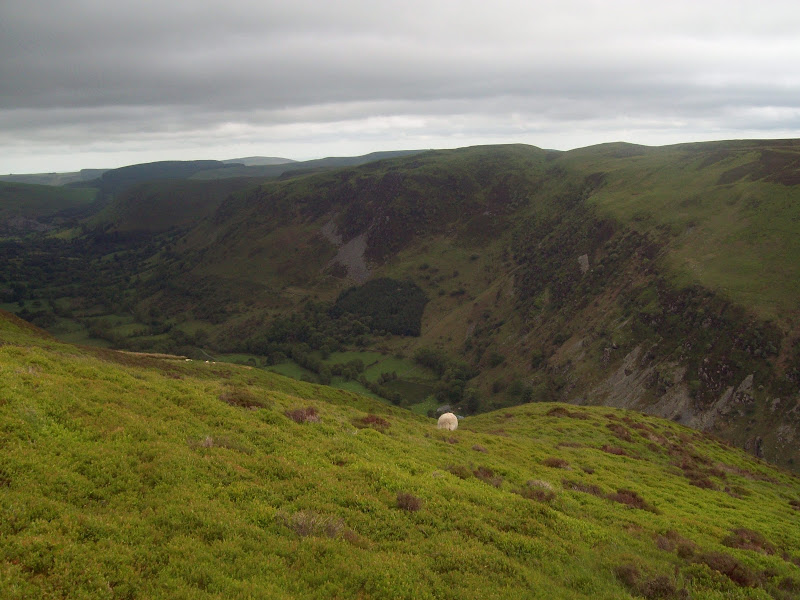 I crossed the road and picked up the farm track on the other side. This turned into a footpath ascending the SE ridge of Foel Cwm-Sian Llwyd, crossing good grazing land for the first km. I wasn’t sure if the path would remain obvious on the ground, but it wasn’t too bad, finding grassy runs as the going got more heathery. It was only really the last 250m to the ridgeline that were hard going, at which point I turned N to reach the summit. Again little excitement, although things may have been better if the views had been less hindered by cloud. 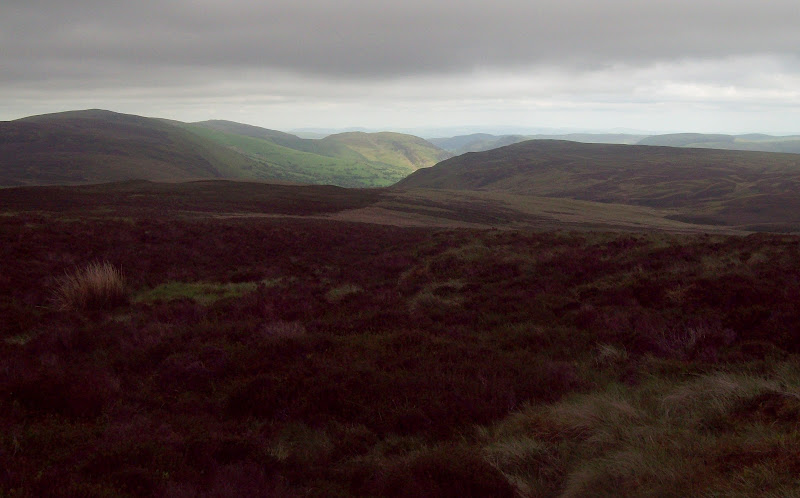 People had warned me that this part of the Berwyns was not for the faint of heart due to the thick heather and lack of paths. They were correct. There are paths of some sort along almost every ridgeline in Wales, but there was nothing here. It’s fair to say that very few people are daft enough to join up Foel Cwm-Sian Lloyd with Cyrniau Nod, particularly when the latter has a lovely easy landrover track approaching from the opposite direction. And to think I hadn’t done it from there so I could specifically save it for this walk!

A look along the ridge to Cyrniau Nod: 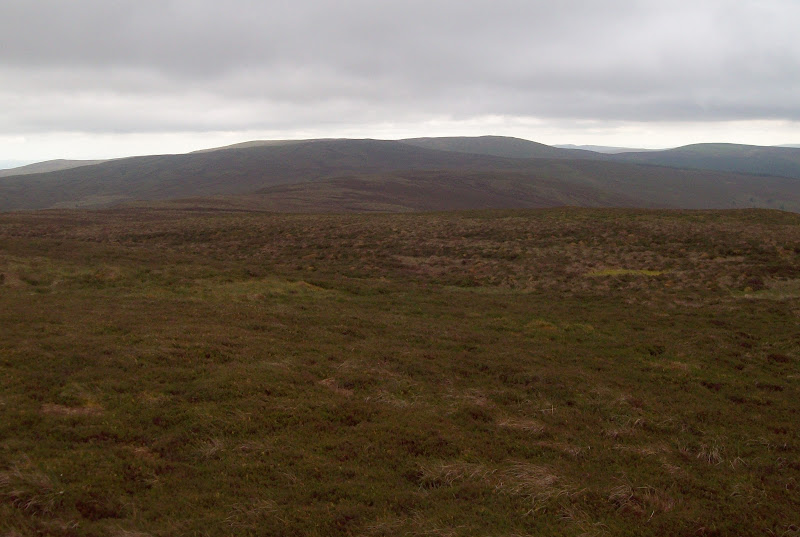 The going was much like the eastern ridge of Post Gwyn for a mile or so. I wasn’t too annoyed as I had expected this and prepared mentally for it. That doesn’t mean that I would wish to repeat it though. The final climb to Y Groes Fagl was a bit firmer, and from there a trodden path led to the landrover track. 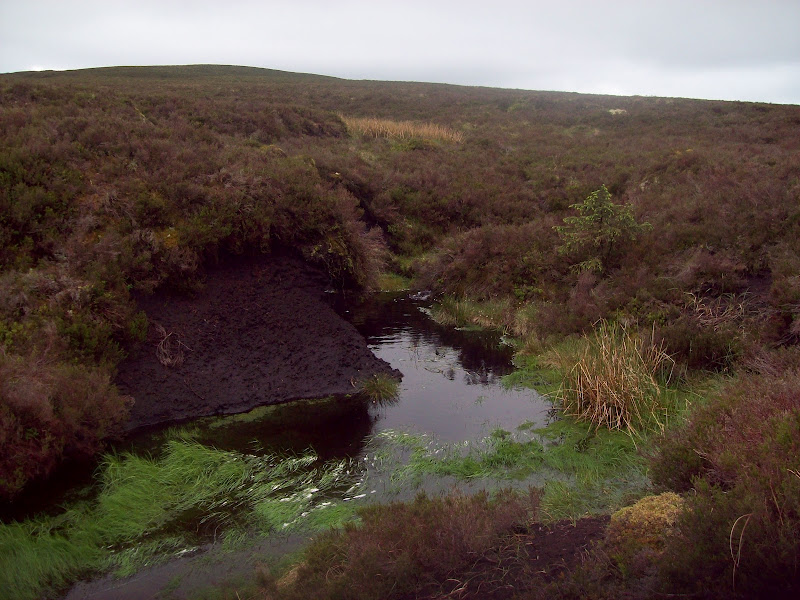 The head of Cwm Pennant from Y Groes Fagl: 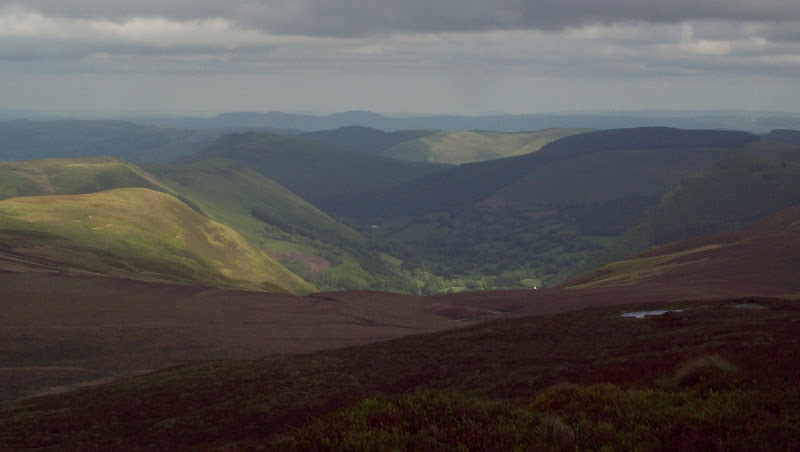 I was only on the landrover track for a very short distance, before turning south at a small cairn. Another trodden route led to the undistinguished summit of Cyrniau Nod. Despite the nearby track, this was about as remote as it was possible to feel in Wales, that feeling helped by the large rolling plateau of heather in all directions. I felt quite pleased that I’d crossed that section of ridge – surely one of the hardest going bits of terrain in Wales. A quick stop just below the summit now that the sun had popped out, and I began my descent.

I had thought to head SE to the 611m spot height, thereby picking up the path into Cwm Pennant, but as everything looked equally heathery, I cut a corner instead. The growth was extremely lush down here, and going wasn’t fast, but soon the heather became mixed with bracken and bilberry. There were also a couple of ruins dotted about. The marked path wasn’t particularly obvious, so I made my own way around the head of Cwm Pennant.

Ruin on the flank of Cyrniau Nod: 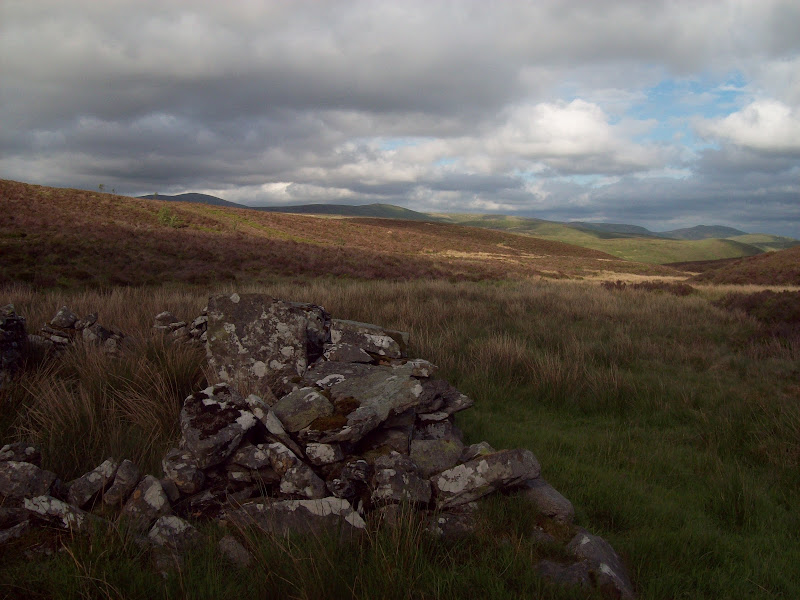 This part of the walk was one of my main reasons for choosing this approach to Cyrniau Nod. I had long been interested in Cwm Pennant on the map, and it didn’t disappoint. The sun was right out now, making it very difficult to photograph the waterfall, but the location was almost perfect. What made it even better was that it looked like very few people ever ventured up here – I could almost claim it as my own! 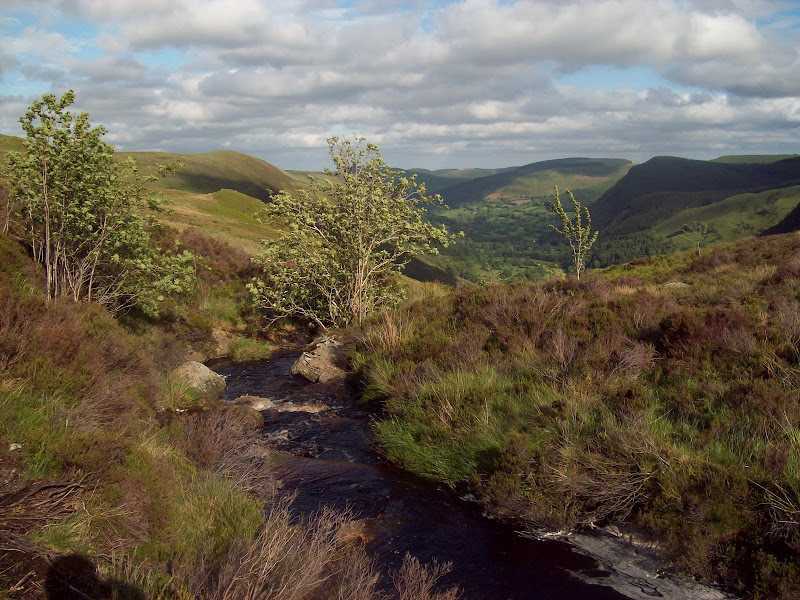 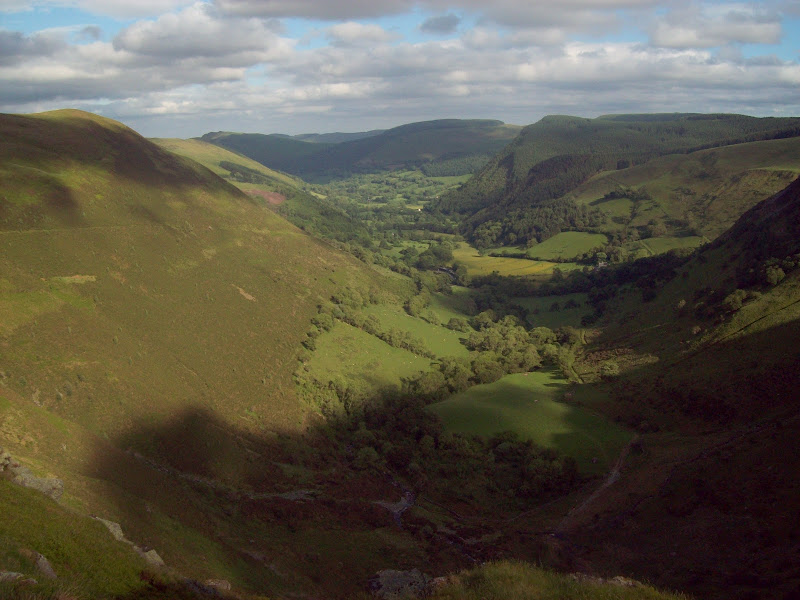 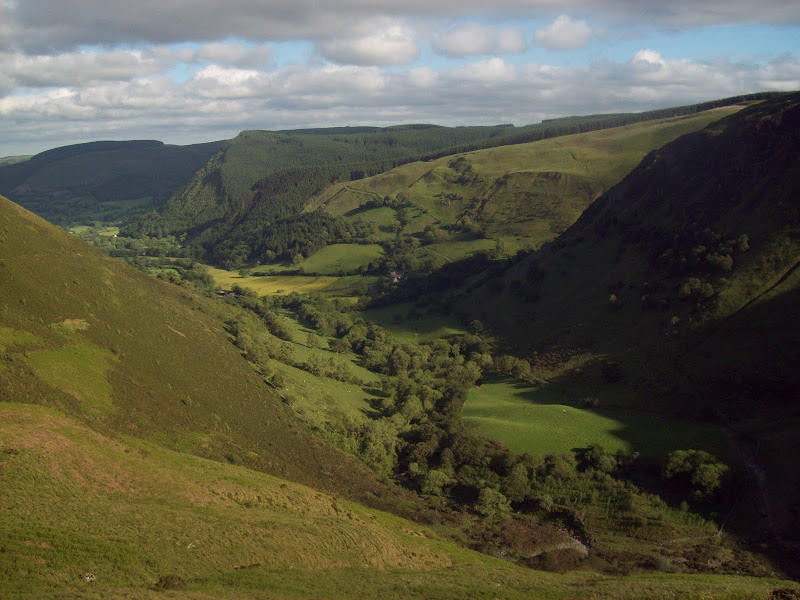 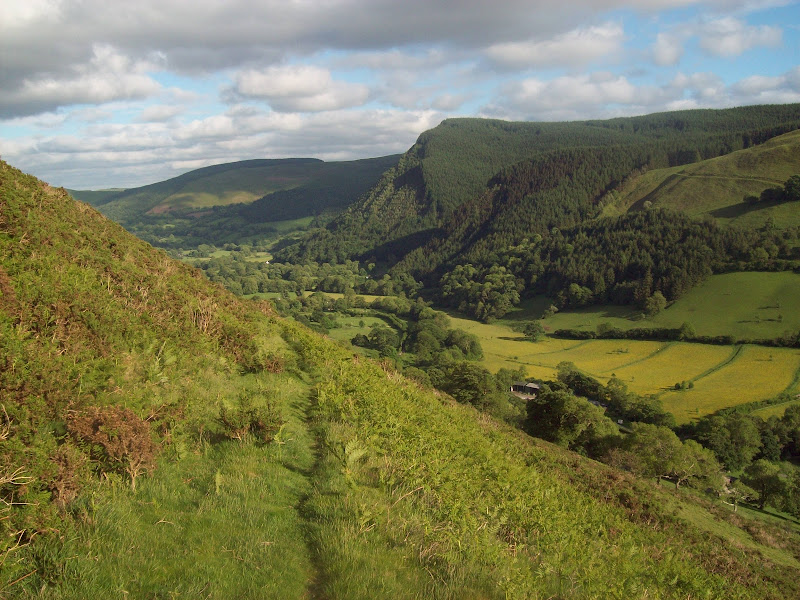 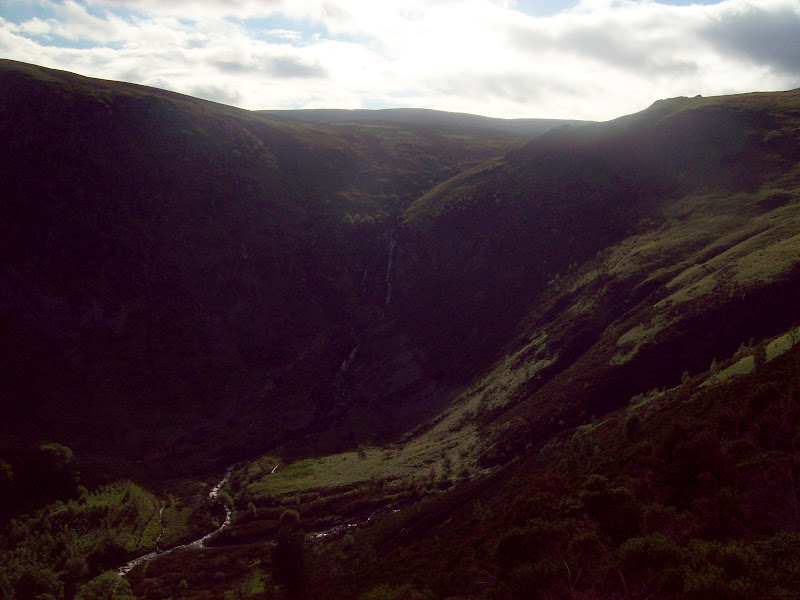 The path became obvious where it made a descending traverse of the NE side of the valley, but it still didn’t appear well used. Eventually I was on the narrow road leading through Pennant Melangell. It was a lovely walk back down to Llangynog, and I used a short section of footpath alongside the river to avoid some of the road. 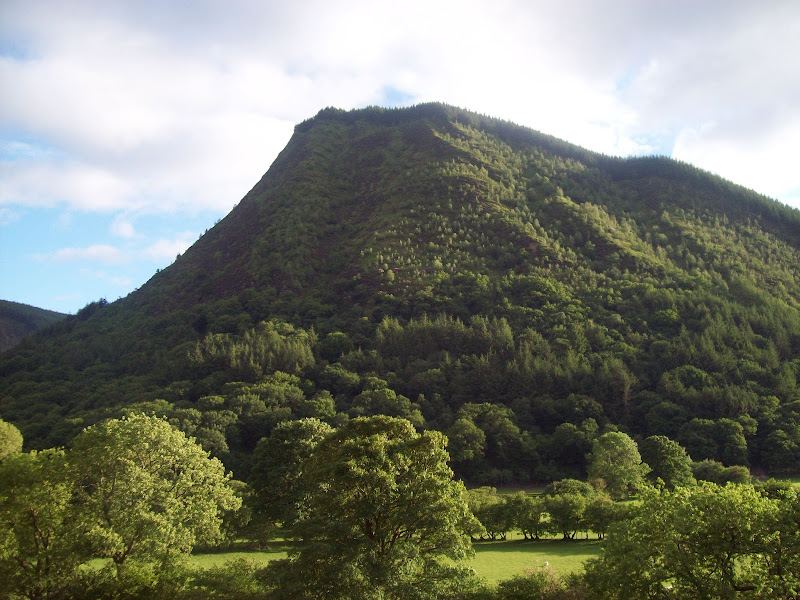 Due to the great ending, I was left with warm feelings towards this part of the Berwyns – I bet not many people say that!

Next I considered a dessert of a couple of easy Marilyns that were in the area. In the end, I decided this would be a two-course meal and didn’t bother, as I wanted to set myself up for an early start on Sunday. I drove around to Lake Vyrnwy and up the minor road to Bwlch y Groes. I had parked up here while making a quick ascent of Moel y Cerrig Duon in February, and I decided it would make a great spot to spend the night. I almost attempted to sleep in the car, but with bad memories of doing that at Lochivraon last September, I pitched the tent instead. Then I cooked my dinner and watched the cloud rolling over the Aran ridge. All being well, I would be on Aran Fawddwy tomorrow.

Cloud pouring over the Arans from my campsite at Bwlch y Groes:

Re: Foel Goch and the Berwyn Bogtrot

Great Report Malky.....Have to say there were boggy parts of that walk that reminded me of bogtrotting Dartmoor.....but the ending was well worth it and some great pictures as well!

Re: Foel Goch and the Berwyn Bogtrot

You certainly made the best of those hills Malky, even the path free boggy traverse, it's always nice to go where few feet have trodden. You got some great pics, I like the shot across the dee valley with a lid of cloud on it and that last one with the rolling cloud slithering along the hill top