This is the first report I have submited for a while mainly due to the fact that I have been working away from home a lot and finding the time just to go walking is hard enough never mind time for a report, however I have a spare hour so thought I would do a quick report after a great day out in Glen Shiel.
After much deliberation on where to go mainly due to a dismal forecast MWIS predicted a better afternoon for the NW highlands which made up our minds for us. We could have picked any of the hills as none of us walked in the area before but after working in Glen Shiel for a few weeks back in April and seeing the Saddle from the roadside there was only ever going to be one place to start.
We left Forfar at 5 a.m and had arrived in Glen Shiel by 8.15 a.m and the weather, which had been changeable on the drive up was much better than expected, most of the tops in view with only some of the five sisters hidden by clag.
We parked up in the layby behind the only other car there, although there were a few in the other layby further down the road. We headed for the path which started off climbing gently but by the time we were on the traverse across Meallan Odhar we were slowing up a bit and a lone walker whizzed by us, I dont even think he had broken sweat yet! On the plus side the weather was holding up although I was expecting it to close in at any time. 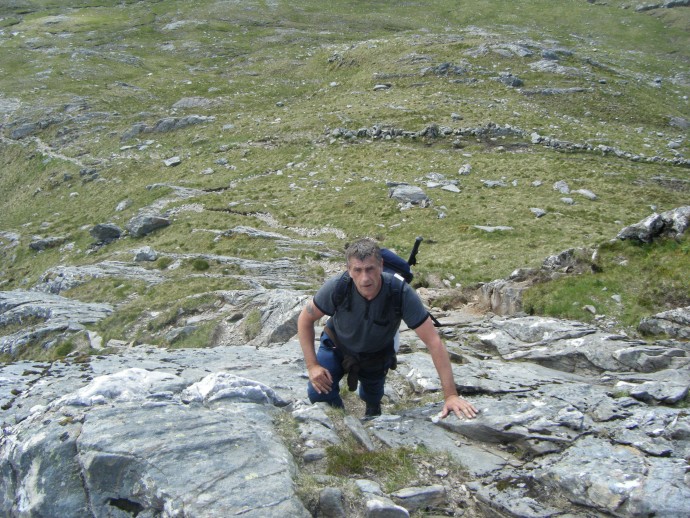 Nice report from my favourite mountain. You've made that descent look hellish with those couple of pics

Loved the report, Gary, and so glad to see you out and about again

Some fantastic photos and, the one of Craig going down the drop made me feel a bit dizzy as well

Excellent pictures, especially for the tricky bits - brings back memories