Another superb Autumn day in the Highlands

Another superb Autumn day in the Highlands


The idea of doing this route was to 'break-in' the new boots, wearing them around the house wasn't proving too popular and a few circuits of Drumnadrochit woods wasn't much of a test. The weather looked better in the west so off we set with an idea this would be a bit of a stroll, I had glanced at the walk description and the only thing that seemed to sink in was that I wouldn't be heading west at the top.
For those reading this before going up the other reports are accurate - this is steep - very steep and relentless, but oh so worth doing.
We set off around 12:15pm and were back at the car park by 3:00pm with some short stops en route and about 20-30 mins on top (only on the east summit!).
As you'll see from the photos we had great weather and I must say something about the path, it is superb; the time, effort and money that has gone into creating this incredible route to the top and alowing the previous scar of a path to heal, deserves enormous recognition. This is a very busy route on a delicate hill and without the path things could get messy and dangerous. 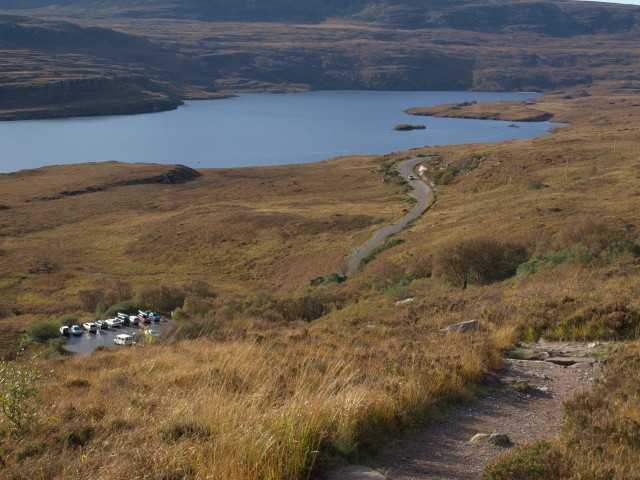 Looking back towards the car park Heading around the east side on the excellent path

- they ended up going round to the path and arrived at the top shortly after us - good luck for the wedding. Below are some of the neighbours We went back down to the main path and took the route west - a lot of people were retracing their steps, but if anything the return was gentler on the knees than I anticipate the way we came would have been.
All in all a cracking few hours spent testing the boots, which incidentally performed nicely and a route I highly recommend especially for the views

Re: Another superb Autumn day in the Highlands

What a fantastic climb to break your boots in

Great report & photo's, glad you got such a good day for your climb!

Laughing at that couples pre-nuptual test of character climbing the east summit, can think of easier ways but I guess the views would'nt be the same

Re: Another superb Autumn day in the Highlands

Good stuff! What a great hill this is, unfortunately falling apart very rapidly.