I cycled in to Derry Lodge from Linn of Dee, then walked up the beautiful Glen Derry through Scots Pines above the Derry Burn for the first 3k, then on along the excellent path that follows the open floor of the glen. The weather was stunning - blue skies and hardly a cloud, with snow glistening on the flanks of Derry Cairngorm to my left, and the imposing walls of Beinn Mheadhoin up ahead. 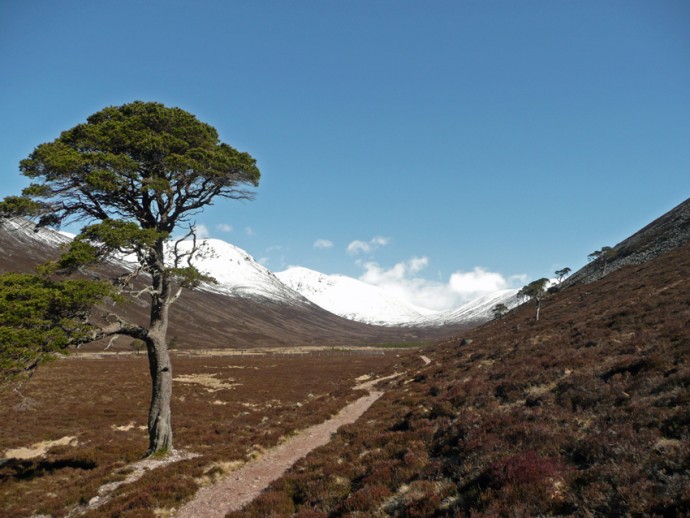 The path began to rise to the narrow defile of the Lairig an Laoigh, and I was soon plodding through snow. Beinn Mheadhoin from the glen I was tempted to head up past the Hutchison Memorial hut to Loch Etchachan, but was intent on doing three Munros today, so continued further up before crossing to the base of Mheadhoin to begin the steep climb straight up through deep snow-covered boulders and heather.
The views were now becoming very distracting and I found it hard to maintain concentration, but it gave me good reason to stop for a breather. Once over the rim of the plateau, a cold wind struck me in the face as I crossed a snow-filled gully with a stream gushing beneath. It had collapsed further up to reveal about 8ft of snow. A massive snow-field now lay ahead as I followed another set of footprints onto the broad ridge and battled against the powerful wind to the first of the summit tors. I carried on past the summit to another tor to get a view of Loch Avon where skiers were setting off towards Loch Etchachan. I then returned to the massive summit tor where a fellow walker was attempting to climb to the summit. Ice filled a crack at the critical point and he had donned crampons, but found them too clumsy at that point and came down. I climbed up to the same point, stepped right away from it, and kicked the ice out of the crack. It was now easier to gain purchase and get to the top.
Incredible ice crystals adorned the summit rocks like the nautical 'dead-mans-fingers', and the views were absolutely stunning in these conditions. I stayed for a few minutes until that wind finally drove me to take shelter below and have lunch, before heading back down the same way. The descent into the pass was quite scary, but I managed to negotiate it without incident. The plateau from the summit I now began the interminable ascent of Beinn a Chaorainn as the clouds began to gather overhead. It was less than 2k but took for ever. The cloud was just resting on the summit when I arrived, but it lifted and revealed more great views of the central Cairngorm massif. I was soon heading off down the SSE spur into the peat hags and groughs of the Moine Bhealaidh. The sun returned occasionally, along with a couple of snow showers as I made my cautious way towards the twin summits of Beinn Bhreac. From the main summit, the Dubh Ghleann was living up to its name, looking as black as coal, but Beinn a Bhuird beyond was catching the sun. Another day, I thought!
I set off south down the broad ridge but lost the main path and made my own way down into Glen Derry to rejoin the outward route back to the bike.
This would not have been possible without the bike, but what a grand day out, Grommit!

wow - beautiful shots of a fantastic day in the hills, what a difference a few thousand feet makes as you hike your way from Spring to Winter in a few short hours