After the gloomy weather the day before on Ben Wyvis, the forecast for today looked a lot more promising. Approaching over the Dirrie More An Teallach stood proud but with a cap of white cloud. The surrounding air was summer blue. Turning left at Braemore Junction we sped down the road towards Dundonnell and Little Loch Broom. To our right we could see Loch Broom. We passed Coirehallie where the car park was almost full.

We, however, parked up at a layby just beyond a telephone box and near a mountain rescue post shortly after passing the “Dundonnell” sign. The air was still and hot. A 14m elevation start point meant that the full might of this mountain would need to be tackled. Sun protection applied we left at about 9.30am and found the half hidden path that leaves the road beside a couple of cottages and began a rising traverse behind them. The Ordnance Survey map shows the path climbing the steep nose of Meall Garbh. We ignored this and instead followed a path shown on the Harveys map that makes its way over broken ground eventually to the Garbh Allt. The path is well cairned. After an hour or so we stopped for a rest, a drink and respite from the heat. 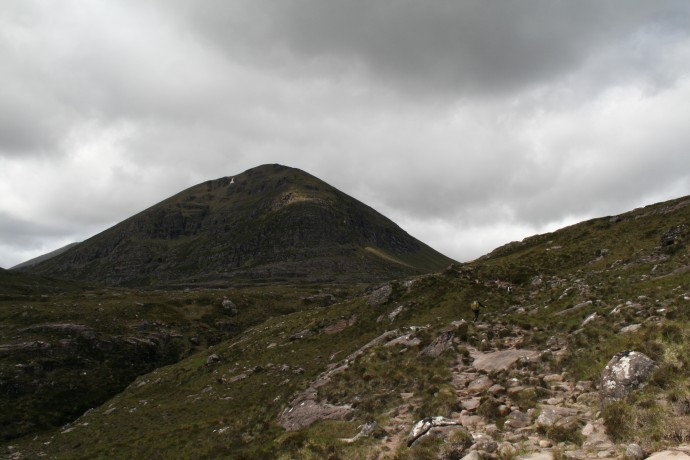 and cloud was beginning to build up. But to the south east the Beinn Dearg group cleared. The path then takes you easily up a shallow valley and into Coir’ a’Mhuillinn. Even after only a short dry spell a lot of the stream beds were dry. From a long way distant a cairn can be seen ahead at the point this path hits the ridge. My objectives for the day were the two subsidiary tops of Glas Mheall Mor and Sgurr Creag an Eich having previously done the traverse via Sail Liath many years ago.

About 500 metres short of the ridge I left DD (for an explanation of this see my TR on Cairngorm Wanderings) and my brother, Peter, who were going to aim straight for Bidein a’Ghlas Thuill. I took the steepening slopes south eastwards heading for the col between Glas Mheall Mor and point 916 (as shown on the Harveys map). On reaching the col I was met with this view of Bidein a’Ghlas Thuill and its pinnacled eastern ridge. 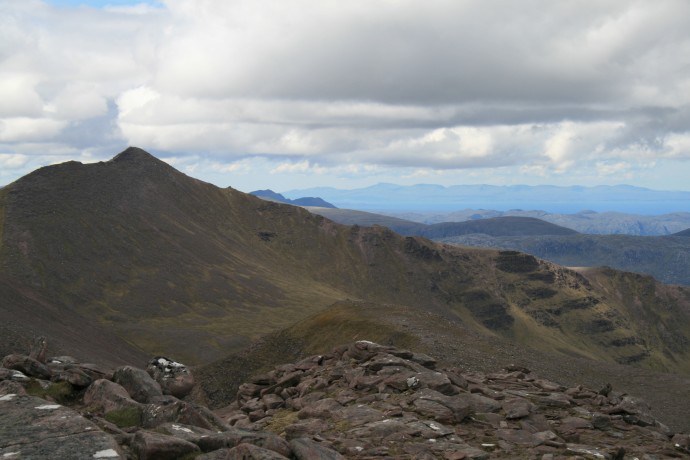 Sgurr Creag an Each and northern Skye 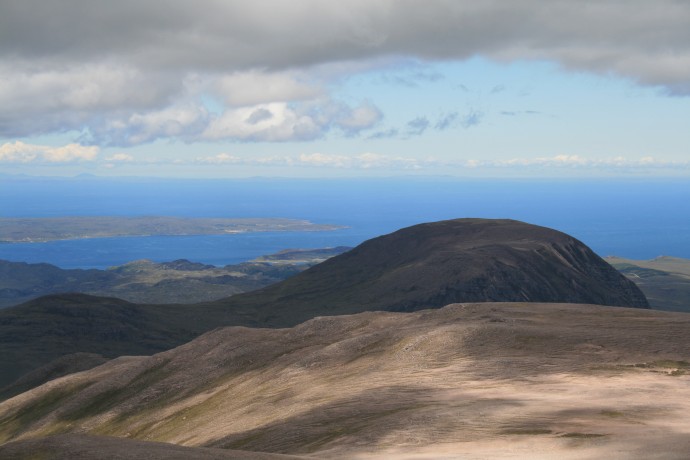 I could see DD and Peter on the slopes of Bidein a’Ghlas Thuill and took this zoomed shot of them about 1km away – with DD storming ahead of her uncle. 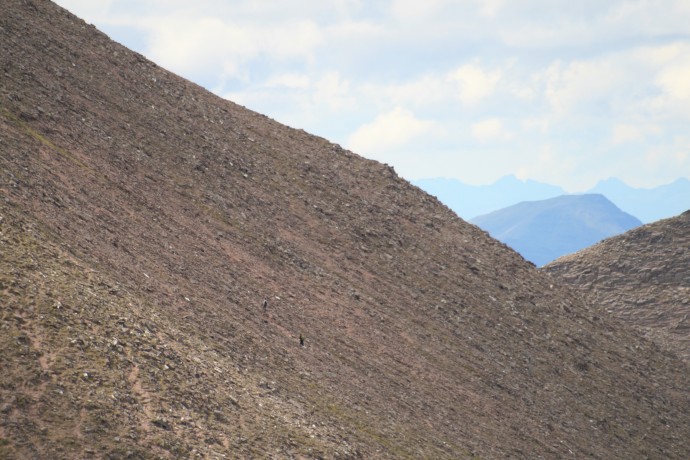 I hurried back along the ridge and over point 916 to the col at the head of Coire a’Ghlas Thuill. I made my way up the same path as the others. However, if you want a more sporting approach, it is possible (once 30m or so above the col) to skirt around to the left and to scramble up the true north ridge of Bidein a’Ghlas Thuill. In fact a couple with their two young kids ahead of me did just this.

I arrived at the top about 30 minutes after DD and Peter and just after the family of four. It was quite a busy summit. There was also a German guy and later a Dutch one. Although I did not know he was a WH’er at the time I met with Snowdonia7 and had a brief chat with him.

He had ascended from Shenavall with his friend, Neil.

It had taken me about 40 minutes between the two summits and it was time for a spot of lunch, and to marvel at the views. It was cloudy to the north and east. Beinn Dearg remained clear The Fannaichs rose of the moors to the south 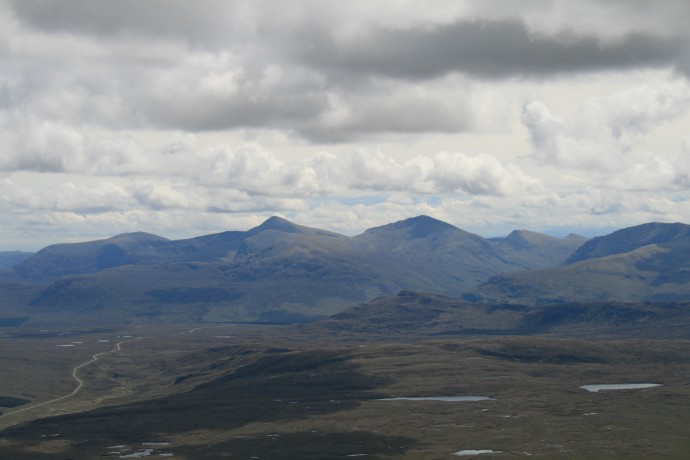 and Sgurr Fiona was close at hand with the Torridon and Fisherfield hills behind. 15 minutes later we were on our way again. I stopped to take a few shots 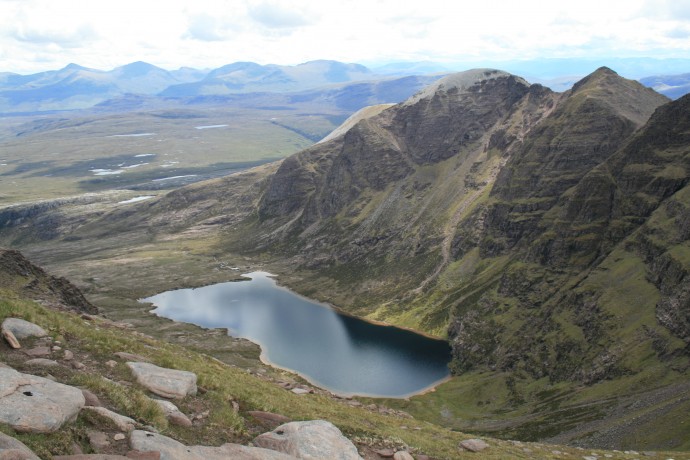 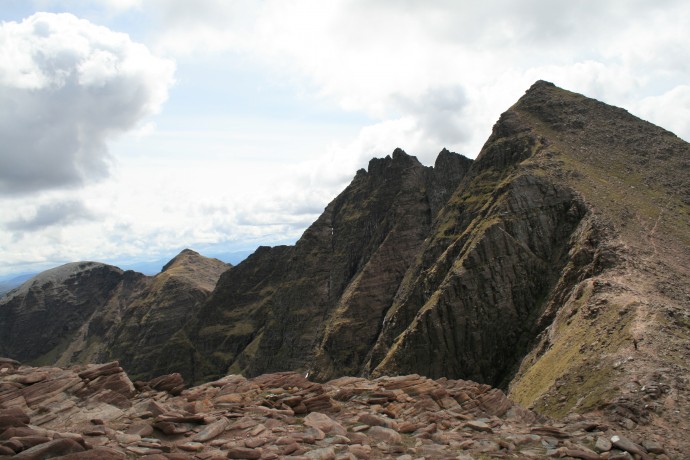 including one out to Sgurr Creag an Eich, the final objective. 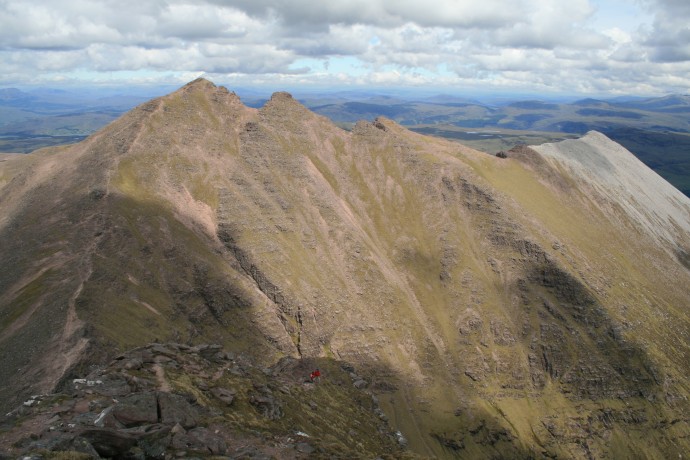 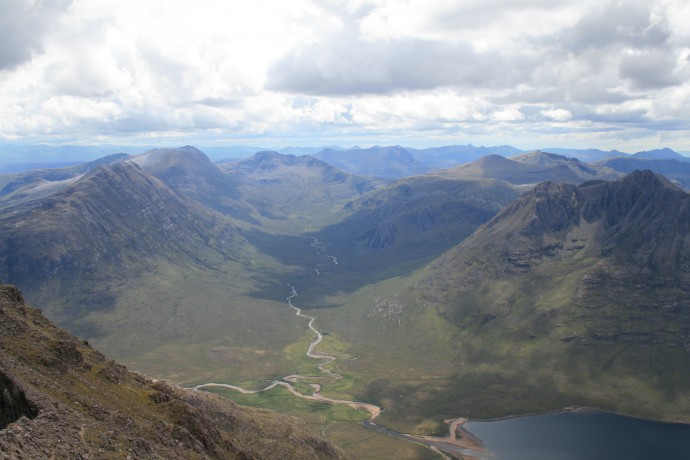 and to the pinnacled crest to the south.

We all descended the west ridge. At a knob of rocks a path cuts back across the north west face of Sgurr Fiona (indeed this is the more obvious route up from the first munro) and would be my way back so that a re-ascent of Sgurr Fiona would not be needed. DD and Peter left me here to return to the car. Here is a view back up the ridge. 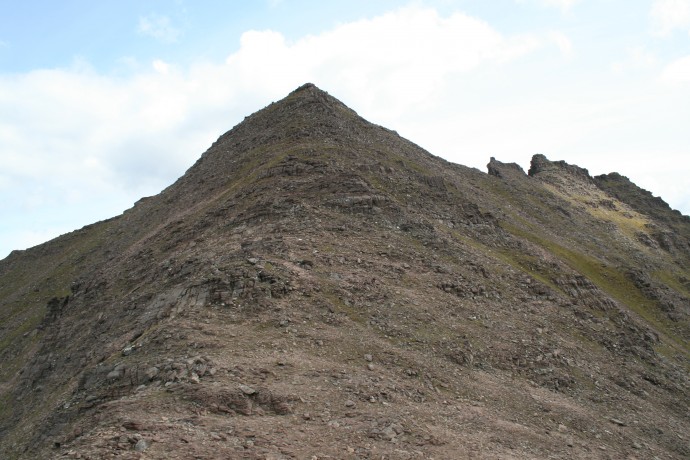 I carried on westwards. Here is the view back to Sgurr Fiona, Lord Berkeley’s Seat and Corrag Bhuidhe 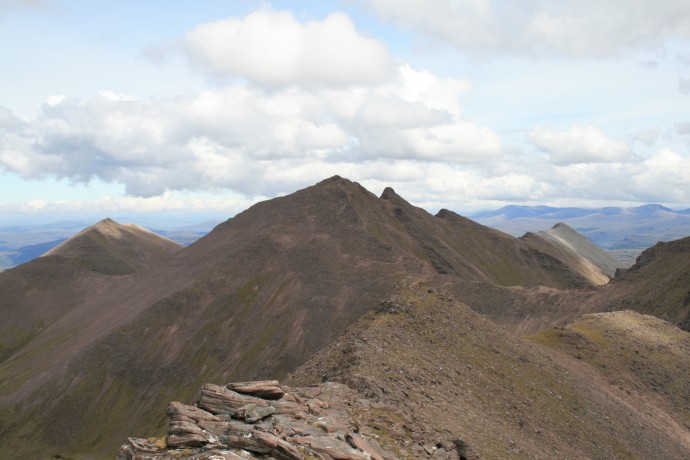 and, finally, Bidein a’Ghlas Thuill and Sgurr Fiona together. I spent some time marvelling at the views and the different aspect of An Teallach. Now it was a question of getting back. It was 3pm when I left. A stiff southerly breeze sprang up. To the south of the ridge line there are tracks which speeded up the return to the col with Sgurr Fiona. There was then a 50m climb up to the knob of rocks and the traverse down the north west face of Sgurr Fiona. Then there was the prospect of a re-ascent of Bidein a’Ghlas Thuill. In fact a complete re-ascent was not necessary. It was possible to contour around the western slopes without too much difficulty so that it was just 30 minutes from col to col. A rough path skirts around point 916 to the west to the cairn at the start of the path which we had followed on the way up. Notwithstanding tiring legs it was a good romp back down to Dundonell and I was back at the car at around 5pm. DD and Peter had been waiting just 35 minutes.

By this time the cloud had again covered Beinn Dearg and the Fannaichs. As we left An Teallach the cloud was swirling around the higher tops indicating the arrival of a weather front. But we had had a great day out whilst most of the rest of the country was being hit by rain.

Great hike CL, you must really feel like you nicked one from the weather gods there

some stunning photos, my favourite being the last one where the sea meets the mountains, beautiful. I miss the sea being here in the middle of the Prairies...maybe its time for another road trip

Oh dear, it's less than two weeks since I was on the summit of Sgurr Fiona and I am really missing it already.

Great report and piccies though. Not as good as being there but it's the next best thing