I’d booked a few days off work hoping to do some hills about a month ago and I was delighted to see the forecast as the week started. I was aiming to do the four Munros in the Beinn Dorain group. I drove up from Leicester and got to Bridge of Orchy at about 3.30 and parked near the station.

I set out at about 4.15 in lovely autumn sunshine, no wind and no clouds at all. The path up to the corrie between Beinn Dorain and Beinn an Dothaid starts on the other side of a tunnel under the railway and leads steadily uphill. The path is clear, eroded in places with the odd boggy bit but straightforward.

On such a beautiful day I wasn’t surprised to see a steady stream of people coming off the hill, at least 25 in total and I stopped to chat with a few, who were all in high spirits. I got up to the narrow saddle between the two hills by 5.40. I set up camp quite quickly and then, enthused by the great weather and all the grins I’d passed decided to do Beinn Dorain right away! I thought the path would probably be wide and clear given the traffic and so it proved. I walked up to the left of two lochans on the ridge, past the first “fake” summit on a bit of a rocky ridge down to a dip and then up to the top at about 7.15 just as the last traces of red were fading in the west. It was a dead calm evening and a completely clear sky. It quickly got cold and I sat in all my gear and looked out to the south over a vast dark landscape, the shapes of the mountains just visible, with two little pools of light from Tyndrum and Crianlarich. They looked so small and isolated. It was beautiful.

My camera couldn’t cope with the darkness so there’s no picture of it all I'm afraid - just the following. 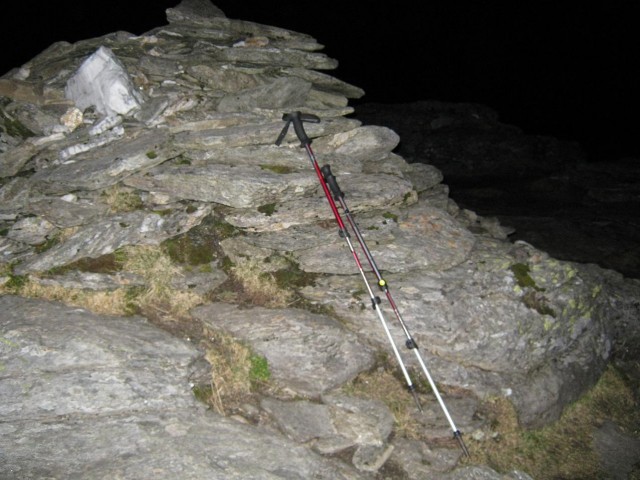 As I set off down the ridge the stars gathered overhead, more and more until you could see thousands, with the Milky Way shining bright across the sky.

This was already an outstanding experience and I’d really only just begun.

I got back to the tent at about 8.45, guided by my head torch and the clear path, obviously well trodden but probably not so often in the darkness!

It was a very cold night but I was fine in my bag in the tent. There was a profound silence and not a breath of wind.

I woke up at about 7.30 and starting getting some tea on, porridge cooking etc. Three hardy souls appeared separately between then and about 8.30. I had been a bit worried that the weather would change but it was obvious from the start that it would be a fine day. As the sun rose the chill quickly disappeared. Down in the glen there was low lying mist but all the tops were clear. 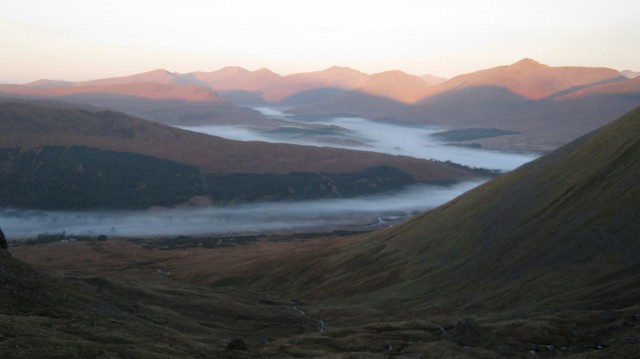 I started off for Beinn an Dothaid about 9.15 feeling set up for a great day – one summit under my belt already! From the saddle it’s a broad grassy hill with the path noticeably less worn than Dorain, with the odd bit of squelchiness to moisten the boots. I skirted the first top coming up to the main summit for 10.20. 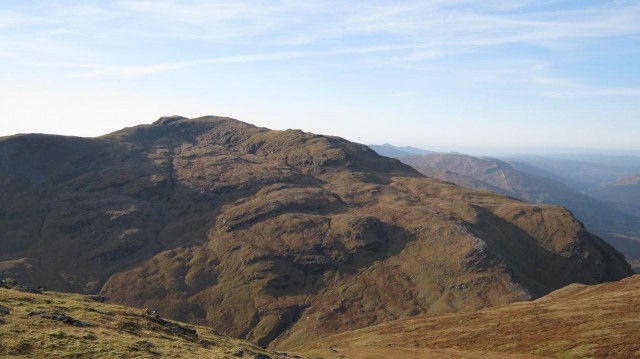 I was feeling very pleased with myself when two lads came racing up from Coire Achaladair – when I say “racing” I mean running! One of them then ran off to get the second top – taking about 10 minutes over uneven ground!

I set off before he started back but I was not surprised to be very quickly overtaken.

The ridge down to the saddle before Beinn Achaladair is pretty steep so I watched my feet as I came down. 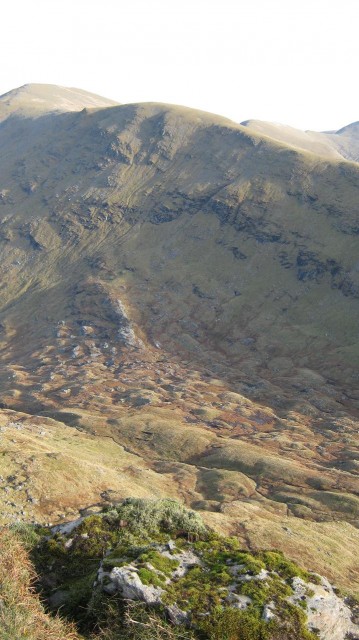 The views were stunning. 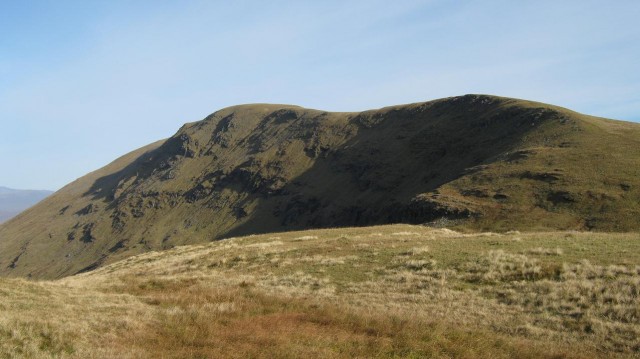 After a similarly steep pull up from the bealach there’s a broad grassy ridge and I was on my second summit of the day by 1.00. 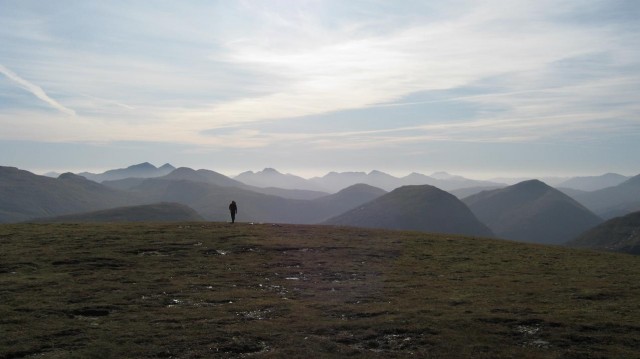 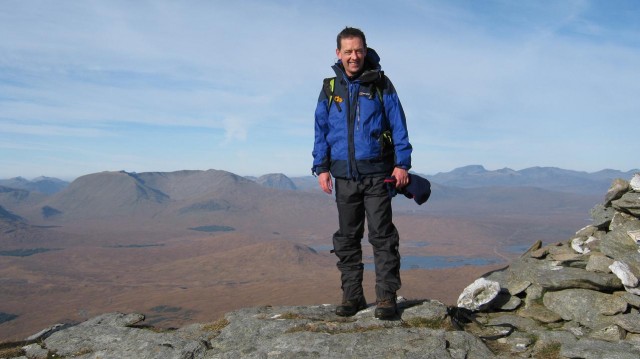 When I got up to Meall Buide I was overcome by hunger and sat and ate my lunch looking out over the huge expanse of Rannoch Moor to the hills beyond. Mark and Jenny caught me up there and we all continued together down to the dip before the main summit and then up along clear paths to the top by 3.10. There was just a wisp of cloud as I reached the summit and to the south there were low clouds gathering but the day remained fine and bright. We then headed down the broad ridge to the north east of the summit and down to Lochan a Creachain in the corrie far below. We then followed a path down the side of the Allt Coire an Lochain but somehow managed to lose it. 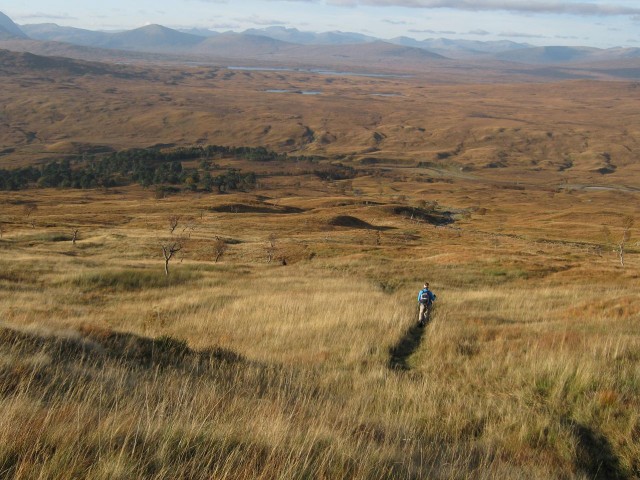 We then spent a while blundering about in the admittedly pretty Crannach woods before finding our way over the railway, over the Water of Tulla and on the path back to Achallader farm where Mark and Jenny were parked. 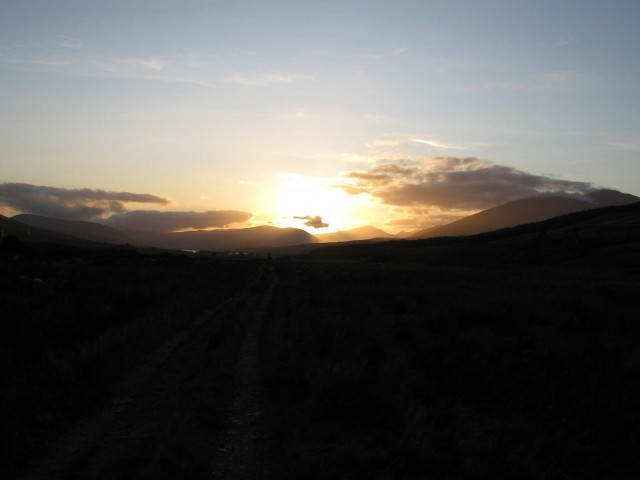 They kindly gave me a lift back to Bridge of Orchy and I was back at my car by 6.30.

What a fantastic trip!

Welcome to the site pete, that's a cracking first report. You've certainly sold the benefits of wildcamping high with those early morning shots.

A fine report and just look at that great weather!

The high wild camp after the long drive is a great idea, something I hope to do next year....

I really enjoyed reading your report, that is one of my favourite walks/views from the summit

Oh and both times I've been my chums and I have lost the way out a bit going through the woods...everybody does, I think

Sounds great. Camping out high up on a mountain is definitely something that I've got to do.