A mugging on Beinn nan Aighenan; and a Beinn or two too far

A mugging on Beinn nan Aighenan; and a Beinn or two too far


A pall of cloud hung over Ayrshire and, a little further north, shafts of sunlight broke through the gloom as if to bestow ethereal blessings on selected parts of Glasgow. Further north still, a brightly lit blue sky across the horizon beckoned. It all boded well for a trip up to visit the Munros to the east of Loch Etive. I was confident of getting two added to my tally, and three should have been a shoe-in: there was even a chance of making it five.

It had been almost thirty years since I’d last been in Glen Etive, mostly hurtling down to the Trilleachan slabs to wrestle with Swastika or Spartan Slab. The former always proved to be a grade too hard for me, while the latter was repeated enjoyably on a number of occasions. I’d forgotten what a beautiful place it can be: wild, steep slopes rise to each side and deer stand confidently by the side of the road staring as if in challenge to the intruders. Rhododendrons add flashes of colour to the myriad of greens and, with the river level low, bleached stones mark the course of the river as it meanders across the valley bottom. This time, with so little rain recently, no cascading plumes of water streaked the slabby cliffs, the air was clear and wispy early-morning caps clung to the summit tops. But no eulogy to Etive can ignore those times when leaden skies, with walls of airborne water driven by immensely powerful winds make it a bleak and forbidding place. Even after three decades away I can still remember those times too: beauty and power in equal measure.

Now, that’s enough of trying to wax lyrical. Within ten minutes of my arrival at the empty pull-in across from Coileitir all three places were filled: perfect timing and hopefully the prelude to a perfect day. 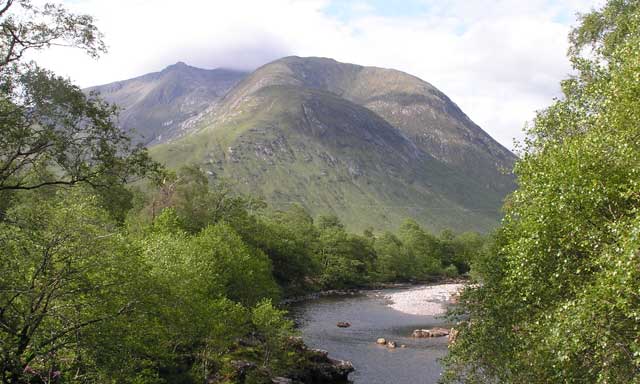 For those familiar with iconic Lake District images, the elegant, elongated ridge leading to the summit of Ben Starav is reminiscent of The Band which provides a similarly direct route to the top of Bow Fell. They are equals in length and directness, both being just over three kilometres long and each leads from the valley floor to a final rocky summit in an enticingly direct line to one of the main peaks in the area: but there similarities end. Anyone ascending The Band clambers up barely 500m, while from the foot of Ben Starav’s north east ridge almost 1000m is gained in the same horizontal distance.

Forewarned is forearmed. Three of us set of from Coileitir at about the same time, but barely a word was spoken as each retreated into their own worlds, at their own pace, with their own rhythm, until the summit was reached. All too often long steep ridges focus you purely on the rising ground that appears to be pressing into your nose. The spectacular view that is inevitably evolving to your rear is excluded, glimpsed only occasionally between your legs if the ground is too steep. Ben Starav, however, offers an unfolding panorama to occupy the mind. Beinns Fhionnlaidh, Sgulaird and Trilleachan increasingly dominate the horizon as more and more of the coastal views emerge: scenic pain management at its very best.

NNE from upper reaches of ridge

Just over two and half hours from the car and the summit was reached and a breathless sociability could begin. In addition, confidence for the day ahead rose with half an hour shaved off the “book time.” The short stretch from the summit to the south east top was one of the few spells in the day when a relaxing leg-stretching walk could be enjoyed and from where the views from the cairn are revealed. Immediately after this, however, the descent and traverse to Stob Coire Dheirg begins. 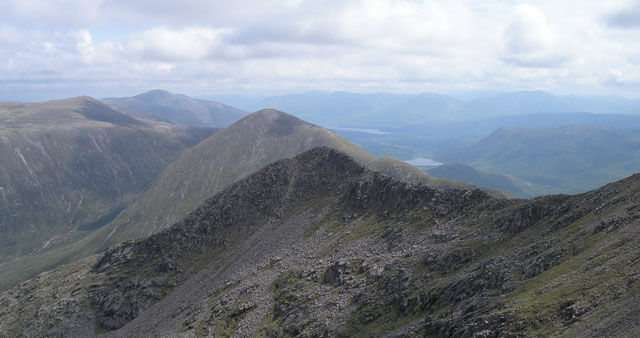 Just before the final scramble to its top was reached a clear track that lead down into the upper reaches of Coire an t Sneachd appeared. Optimistically hoping it would swing quickly left and contour round to the Bealachan Lochain Ghaineamhaich it was followed. Twenty minutes later, and after a thrash amongst pathless scree and boulders, hindsight could clearly classify the detour as a mistake. A distinct path dropped down the crest of the ridge and would have been the better option. 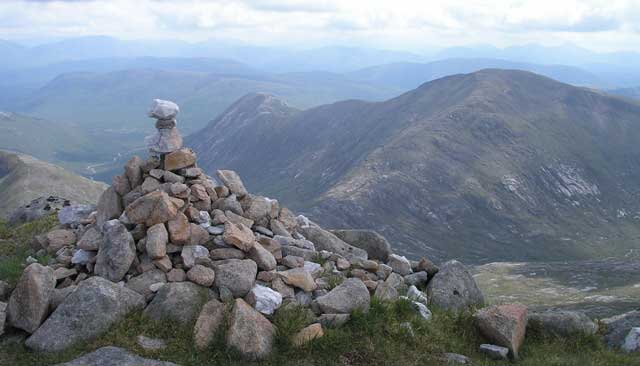 At the bealach the next decision was obvious. If you’re up there, you have to take in Beinn nan Aighenan. Otherwise, when would you come back to make the trip for this solitary Munro?

And that was where the mugging began and my optimistic aspirations were obliterated.

With each step taken towards Beinn nan Aighenan my mood descended a further step towards despair. The path just kept on dropping, and dropping, and dropping. The altimeter on my GPS was falling like a barometer in the face of an advancing deep depression. I’d naively assumed that this would be a quick jaunt, a minor diversion, a lightweight excursion. It was fast becoming obvious that this was going to mean a significant amount of descent, ascent, descent and re-ascent before getting back to where I’d started from. Neither quick nor minor came remotely close. 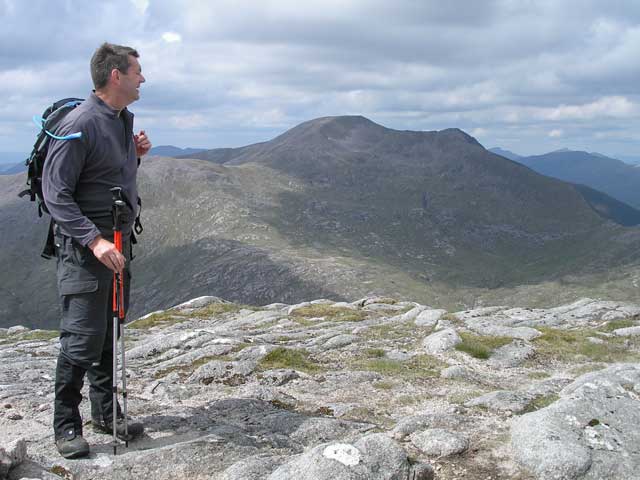 Neil and Ben Starav - companions for the day

By the time Beinn nan Aighenan had been reached any thoughts of extending the day to include Stob Coir an Albannaich and Meall nan Eun had been well and truly quashed. Daylight hours may have been available but it was doubtful if leg or lung power would be sufficient to make them enjoyable. It was going to be more pleasurable to end the day feeling comfortable than on a low-note feeling wrung-out and drained.

The return to the Bealach Lochain Ghaineamhaich was predictably draining. The prospect of avoiding the dog-leg by cutting more directly across to the ridge leading up to Meall nan Tri Tighearnan didn’t materialise: the slopes above the obvious path looked far from welcoming and much too broken and brutal. So it was that the regular path from the bealach and over to Glas Bheinn Mhor was followed. 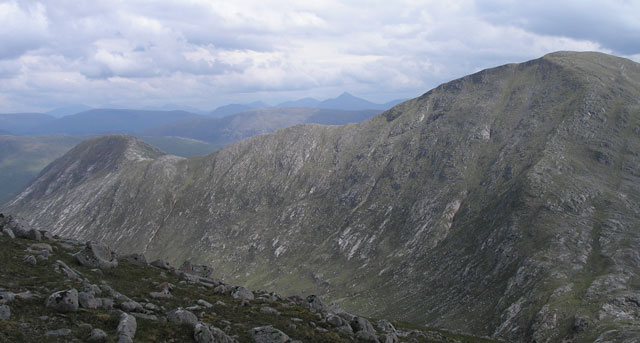 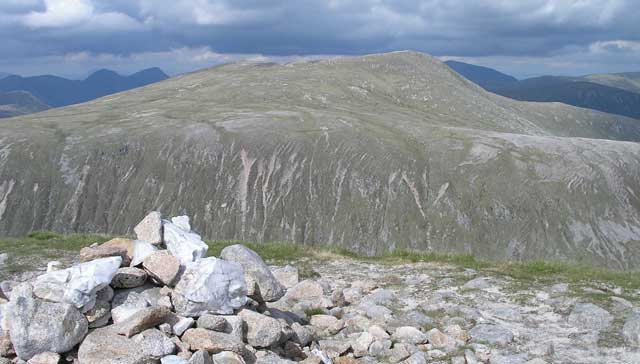 The third and now-final Munro was reached after another welcoming couple of short stretches where a relaxed high level walk could be enjoyed: a rarity of the day’s walk. Company and conversation made the last rockier slopes feel easier and shorter. From the top of Glas Bheinn Mhor, the entire route to Stob Coir an Albannaich and beyond was clear, but temptation was roundly defeated and the descent to the bealach at the head of the Allt Mheuran could be plotted. Given recent conditions, the path back to Glen Etive was far drier than most reports have experienced so the final ignominy of wet feet, mud-clad gaiters and a potential boggy tumble in the last part of the day was avoided.

A tad over nine hours out and the boots were finally removed back at the car with a pleasant sense of achievement and enjoyment. My hat was off to Gavin who recently reported on his own trip round these Munros and who managed the additional two within the time it had taken me to do just three.

Much of the day had been spent in the company of Neil; easy conversation and welcome support on those tougher steeper parts of the route. The cosmopolitan companionship and melting pot on the hill rarely fails to touch me. There I was, an Englishman now based in Scotland, walking with a Scot based in Wales and meeting someone from a part of Doncaster where I was born and brought up and within half a mile of where my mum still lives, and occasionally accompanied by a Bostonian who has apparently crossed The Pond each year for more than a decade and proudly claims over 170 Munros.

Boy, was I stiff when I unfolded myself out of the car on getting back home. And there hasn’t been much gardening done today.

Thanks for this report. The pictures were great and bring back more than a few memories.
Happy memories of Starav (beating the book time isn't one of them - that's a good effort) and less happy of Beinn nan Aighenan being just as you describe -long and very waring - how we hated that hill.
I'm just a little bit glad that someone else found it that way!

Great report OD and some great views too.
The garden will wait...

Superbly written danensian.Did this route not so long ago and know what you mean about the drop to beinn nan aighhenan,it looks so close as well

Also take my hat off to those who go on to walk the 5 munro's.Great report from a great area,well done

Great report. I had to do Aighenan as a 17k single so don't be to hard on yourself. The other 2 make a good circular walk

We (Andy Millar, Rocket Ron and myself) did these three a few weeks ago and throughly enjoyed them. Although it must be said that we were expecting atrocious conditions and had 90% cloud free summits

Got my eye on these ones too for later this year

Great account of your day OD, enjoyed the read and your pics very much. I think I'll be targeting the three

Nice walk OD. Great report so well written as usual. Lovely photos. This was one of my best walks of 2010.

Montys report: "I am going to Beinn nan Aighenan, so I follow the path dropping to the beallach at 600m. A word of caution here. There is an obvious path that heads more directly down the valley. I think that takes you all the way down to Glen Kinglass".

Did you take the path heading to Glen Kinglass