Richard and I were staying at our favourite hotel at Rosthwaite in Borrowdale and the hotelier is in the Mountain Rescue so very good for questioning... I’ve spent a lot of years either passing the sharp end of, or gazing up at, the nose of Base Brown – an otherwise unoffensive and mild grassy hill opposite the farm at Seathwaite. While most of the hill is grassy and plain, the end is rocky, steep and looks quite forbidding... I was on the summit once and saw there was a path heading off for this rocky end so guessed there must be a way up and down the nose. So I asked Neil (the hotelier) and he said there was and kindly explained it to us. From Grey Knotts at the end of the walk...

The next day it was hot and sunny and calm so we decided it was a great day to give it a go. As we’re both getting quite lazy nowadays, we decided to get the bus up to Seatoller and just walk the mile and a bit up to Seathwaite from there... not as lazy as most people though who drive up to Seathwaite Farm!

We decided that, instead of following the road up to Seathwaite as we normally do, we’d take the riverside path to the foot of the route up to Seathwaite Slabs. We set off at a reasonable pace, closely followed by a chappie with a lovely big sunhat. He was pretty close on our tail and it’s quite a narrow track (and I don’t really like to let people pass me) so I kept speeding up (Richard in tow – he’s used to it!) The faster I went, the faster the guy went. We reached the bridge over Sourmilk Gill at Seathwaite where the path split – one way was ours up the gill and the other went towards the farm.

At this point, we were just about to turn uphill, both now out of breath, when the guy hailed us in an Australian accent. He said he’d been trying to catch us up for the last mile to ask us for further directions from Seathwaite! He said we walked very fast!

He was heading for the Scafells so we gave him directions and set off up the steep path on the South side of the gill. Halfway up this steep route, there is a quite a scrambly section by the waterfall up the famous slabs – this isn’t bad to go up but must be hell to come down when it’s wet and greasy! Consequently, I plan all my routes to go up here!

We were really feeling the heat and I decided to cool off my favourite way – I clambered down to one of the waterfalls and soaked my buff – I then put it back on my head... great – instant coolness all over! I scrambled up the side of the waterfall to join Richard on the path and we continued up to the fell wall which is situated at the top of the climb. At least there was a bit of a breeze at the top of the hard climb up.

There was another couple on the same section of path and we set off slightly ahead of them along the normal path to the Green Gable col but then we had to turn off for our ‘nose’. This really confused the couple who wondered why we’d suddenly got lost and gone completely off route. They stood and watched up for ages and we were rather afraid they’d follow us. I certainly didn’t want to be test-pilot for a group of four on a route I didn’t know much about and wasn’t sure I’d like!

We headed up extremely steep grass to the foot of the crags, the couple still watching us hesitantly. We were both taken aback at how steep the climb up the grass was – it already started to look quite a way down and we were still over the hanging valley of Gillercombe. At this point the couple moved off...

We then had to traverse left below the crags – a path appeared doing just that. There is a gill scramble up the crags at this point but it looked truly nasty!

We followed the path round on a narrowing grassy ledge out over the big, big drop to the valley below. We were by now over quite a bit of large crag – you couldn’t really see it below us but I’d studied the hill long enough to know it was there. Neil had said to continue round, looking right up the crags until we saw a route we were happy with to ascend. We saw a broken slabby route which was quite short and looked possible so we decided to have a go... I went first as always... I climbed up the first couple of slabs then decided to look down – ugh! I could see the valley way below – straight down now. I wavered (in characteristic mountain coward fashion) and looked up at the next few slabs. I could see they were possible but wasn’t sure I’d be happy continuing the route over such a fearsome drop. Richard told me to carry on but I said I wasn’t happy and was coming back down to look for a route further round – I did say he could go up that way if he wanted but he followed me.

Luckily, just round the corner, there was a plain grass route up past the crag band – it was extremely steep but had the odd flat platform which made me feel a bit better. Furthermore, that was the way the path had continued.

After a short climb up the extremely steep section, suddenly it was all over and we were above the crag band and could see a nice bumpy and pleasantly narrow ridge going up to the summit. From there it was plain sailing and extremely pleasant – the only ones who weren’t happy were the sheep who really didn’t seem used to people on that route. 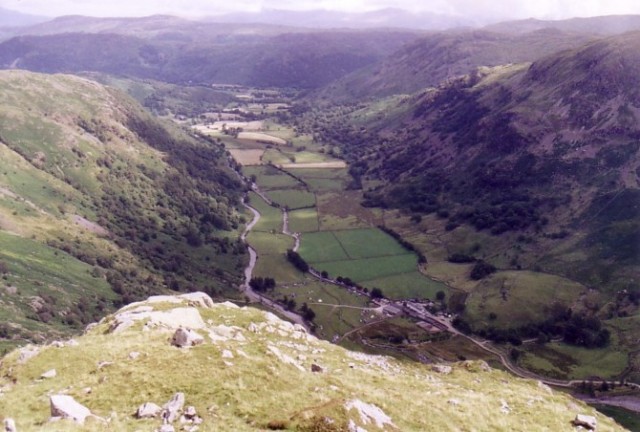 Our route came up the steep right hand side...

We had a look back down over the lip of the crags around the area of the nasty gully – didn’t look nice at all but it was clear quite a few people used that route. We then continued quickly and easily up to the summit. From there we continued onto Green and then Great Gable (as you would – no-one just does Base Brown). It was a bit cold for a break on Great Gable’s summit and it’s always really busy so we didn’t stay long. Back on Windy Gap between the Gables, we stopped for a proper break. We then decided to return over Brandreth and Grey Knotts then descended by another pathless route on grass to Honister Pass (I always think the proper path looks loose and nasty) from where there is a truly lovely route back to Rosthwaite around Scawdel Fell. 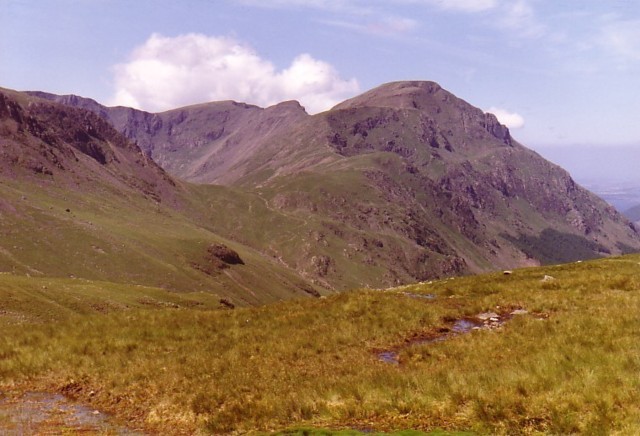 That’s got to be one of my favourite places in the Lake’s.

I think the climb out of Seathwaite up sour milk gill is great as you gain so much height in such a short space of time. The one thing that always gets me is how open and flat it feels ‘round the back’ of Base Brown, and the views it affords back down the Seathwaite valley are great too. The last time I was walking there I saw a group of kids/instructors scrambling around on Raven Crag just under Grey Knotts, I never knew that this was used by out door centres? It looked good and I can see why its used as its wild but also not too hard to get the kids and kit in from Seathwaite.

I like your pics you have included but agree that even in any weather, Great Gable is always busy and like you, I tend not to hang around on the summit. It’s a bit of a shame to be honest as it’s a bit of a pull to get there. I especially love the views from Windy Gap down into Ennerdale and think its worth it if you’ve done the Base Brown and Green Gable route.

I’ve always found this route to be less popular than Stye Head Tarn route as most people tend to climb up that way in order to see Stockley Bridge anbd end up having a rest at the rescue post before the ascent on Gable. I can't stand the 'Breast Track' up from Sty Head and would only ever use it in descent - I've never actually been up it! I normally use Aarons Slack/Windy Gap - a far superior route. Also quite like the one up from Beck Head by Kirk Fell... To be honest though, I'm not a fan of Great Gable (I know everyone else in the world is) - it just doesn't do much for me really...

I love the Gillercome Hanging Valley - I always think it's such a nice place for the sheep - sheltered and fairly peaceful!

?? Did you mean to put something?

Users browsing this forum: past my sell by date and 26 guests