Participants: Isabel and Joe
Weather: Some sunny periods very still.
Route: farm tracks, well worn path with some stone steps.A few signs guiding you through Ardvorlich near start.
Wildlife: A cuckoo that hasn't changed its tune even though its June. Midgies at the top in amazing numbers, must have been drawn up there by all the walkers.
Special Interest: HEP station and wee dam further up.

Ben Vorlich by the main route from Ardvorlich, straight forward climb up to top, a bit of erosion on path near the top. Met a bunch of young lassies coming down as we were going up and they were jumping about and talking away like it was Sauchiehall Street. Gave us a bit of encouragement (or pity) as we passed though, some weegie banter, must have been about 15 of them and good to see them all out. It did indeed feel like Sauchiehall Street as there were very many people going up and down while we did the walk.Just as well there is ample space for many cars. 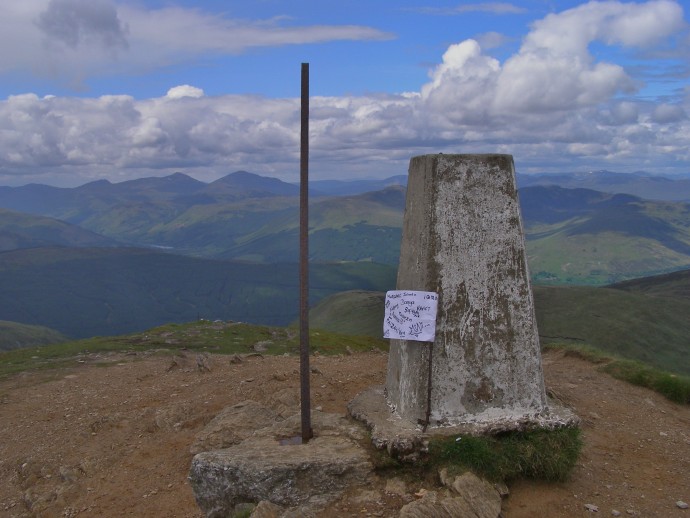 The top with a wee flag left by the lassies The flag, if anyone knows them Looking along the ridge from cairn to trig point