My wife was off to her Book Group on Wednesday night, and the kids were away to various Airts and Pairts for the week, so I took the rare opportunity for a wee bit of summer walking post-work. Of do-able smaller hills that are an easy drive from Glasgow, Beinn Luibhean looked a good option, with a couple of previous evening walk reports on the website (see for instance tomyboy73’s report below with some lovely sunset photies). Being not as fit as I’d like to be, I was a bit nervous that I’d end up stoating down in the dark, but I’d thought I’d give it a go

– I could always turn back if it took me longer than I expected.

The weather had been pants at the start of the week, and was set to be pants again by the end of the week, but there was a brief lull in the middle, and as luck would have it Wednesday evening was dry with even the very occasional glimpse of blue sky

I wasn’t sure where best to park – there are several potential parking areas along the A83 between the Cobbler and the Rest & Be Thankful – I think any of them would do as it turns out. I probably parked one car park too far up – the one just before the wee bridge over the large stream that flows down westwards from the Bealach a Mhaim (unnamed on my 1:50,000 Landranger map; presumably the Allt Something-or-Other) is probably the best option in retrospect as it gives easy access directly to Luibhean’s south ridge.

Anyway, I parked a bit further north, in the lay-by on the right of the road heading north, just before the current roadworks (after the latest landslide of Feb 2012). and took straight to the steep, brackeny hillside. In retrospect, there is easier access to the hill a wee bit further north where there is a gate just before the landslide, or (even better) to the south by the bridge where a gate gives more direct access to Luibhean’s south ridge.

As it was, I gave myself a steeper climb than it needed to be. Ah well, at least it was quick. To avoid the nipple-high bracken (depending I suppose on one’s height & endowment), it is possible to follow any one of several grassy ribbons at the side of the numerous wee streams that come down off Luibhean’s western slopes. I picked the nearest. It looked like I hadn’t been the first: although largely pathless, there were occasional traces of something that might one day aspire to path-dom. It was unrelentingly steep but at least the height gain was rapid! All of these Glen Croe Corbetts are impressively craggy. Immediately, Beinn an Lochain started to look very impressive across on the other side of Glen Croe: From a bit higher up, an unfamiliar back view of the Cobbler opened up: 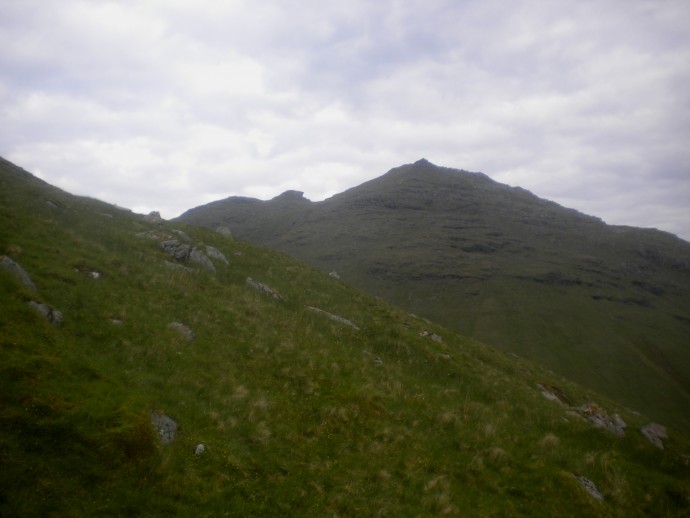 I’ve always thought that the Cobbler is a bit like an over-sized Baby’s Activity Centre, what with those three entirely different but equally funsome peaks. I always therefore wondered whether there might be a fourth peak round the back shaped like a cow that went “MOO!” when pushed, and was quite disappointed to find that it wasn’t actually so

Higher up, at least the pesky bracken disappears, and interesting wee craggy outcrops start to appear. The grassy strip that I’d favoured luckily turned into a useful wee gully up through them, with traces of something that definitely wants to be a path when it grows up: The gradient now eased a bit, although this was definitely a steep wee climb, a bit reminiscent of Ben Vane – a steep, lumpy, conical wee brute of a hill. Great fun, actually. Some sheep appeared, one doing a nice Monarch of the Glen pose. “One day, Son, all this will be yours…” Could this be the summit, then? Aye, right. Just False Summit Number One. However, from here on the walking got much easier on a gentler gradient. The views continued to open up. The Brack looks a great wee hill when viewed from here; I must have a look at it sometime soon: And so I arrived at Beinn Luibhean’s craggy wee summit, just about five past eight. Panoramic views awaited! First Beinn Ime, with Beinn Corranaich to its left: Beinn an Lochain with Loch Restil at its foot: A nice view northwest up (I think) Loch Fyne: A rather fine cloudscape NW round the shoulder of Beinn an Lochain: And a whole lot of peaks to the north: The Cobbler showing off as ever: (I have to confess that to date I’ve only ever climbed the Cobbler’s North Peak and I am therefore currently ineligible to be Chief of Clan Campbell, should the opportunity unexpectedly present itself. Well, you never know

We are so lucky with this country of ours – well, maybe not so much with the weather and the midgies and all that, but where else in the world can you so easily go and climb something like this after work, as is perfectly possible from any of the Scottish cities?

However, I was worried that the daylight was fading while I was faffing about taking photos… time to be getting back down. I didn’t even linger to eat my M&S sandwiches (ham & piccalilli Jubilee special, since you ask). The first bit of the descent was a very easy romp. However, when I started to cut down from the south ridge to aim for the lay-by where I’d parked, I came down a bit further north than I’d intended. Those grassy slopes seem steeper and craggier on the way down! I quickly resorted to some bum-sliding, a.k.a. “glissading”, after which I made more rapid if considerably less dignified progress.

Further down, I found a very sizeable grassy ribbon by the side of a larger burn that the one I’d come up by. As it turned out, this was presumably the burn that had caused the latest landslide: I came down just at the top end of the landslide area, which was handy as there was a gate and everything, avoiding any further barbed wire issues. Looking back up at the “corrie” or “Dirc” left by the landslide, it looks as though there have been a whole succession of landslides here over a period of years: 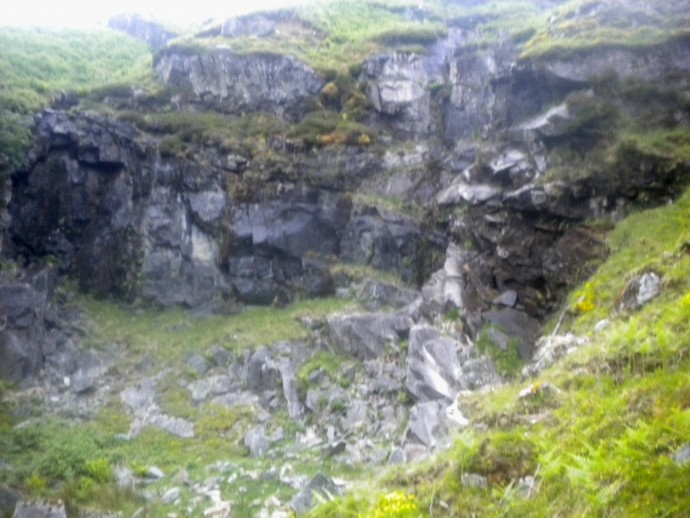 No wonder they’re now attempting to do something more permanent to protect the A83, as I understand it

From here it was a very straightforward walk back to the car and my M&S sandwiches at last. Very tasty, too

. To my surprise, I managed up and down just inside 3 hours, with a good bit of daylight left. Beinn Luibhean may be the Forgotten Arrochar Alp, but I liked it a lot – it was steep & lumpy enough to be fun without being too much of a challenge, and there can’t be many hills that near Glasgow where you can get such good views for as quick a climb.

nice on kenny, it`s a great wee hill with fantastic views, have to disagree with you about our weather, it`s brilliant !

tomyboy73 wrote:nice on kenny, it`s a great wee hill with fantastic views, have to disagree with you about our weather, it`s brilliant !

Sorry, my mistake there

Great wee hill which is also good to access via the buttermilk burn between Ime and Luibhean and a the little glen between the two hills.Done some wild camping in there and easy access to water and the car! I like doing after work hills and feels great to be at the desk one minute and then on top of a hill a few hours later!

You do get some good views from this hill but can remember hardly being able to stand upright due to the wind when up here a few months back ! - cheers