Corbetts included on this walk: An Stac

This one is just a quickie after yesterday's crossing of Ardgour. I had arranged a family meal for 8pm on friday evening, with my wife coming down from Inverness (and then taking me home). I couldn't risk the usual family late start nonsense, so I opted to get out early on my own and be back in Glenfinnan by mid morning. The weather was on the turn anyway, so the prospect of leaving Streap and other classics for another time didn't bother me too much. Anyway, An Stac was still a spectacular hill - steep and conical with coastal views to kill for. Dad and I had left it out of the Rois-Bheinn round back in 1997 due to the weather turning poor (and no doubt we were running out of time...), and another attempt at the round in 2002 had seen us washed off the ridge by Druim Fiaclach. I wanted to revisit Sgurr na Ba Glaise and Rois-Bheinn from the south at some point, so it made sense to do An Stac on its own.

our_route.gpx Open full screen  NB: Walkhighlands is not responsible for the accuracy of gpx files in users posts
There were a couple of spits of rain when I set off from Alisary at 7:45am, but the summit was clear of the cloud. I crashed through undergrowth behind part of the fish farm depot then past the house of Alisary. I could have followed the drive instead.

An Stac from the Alisary Burn: 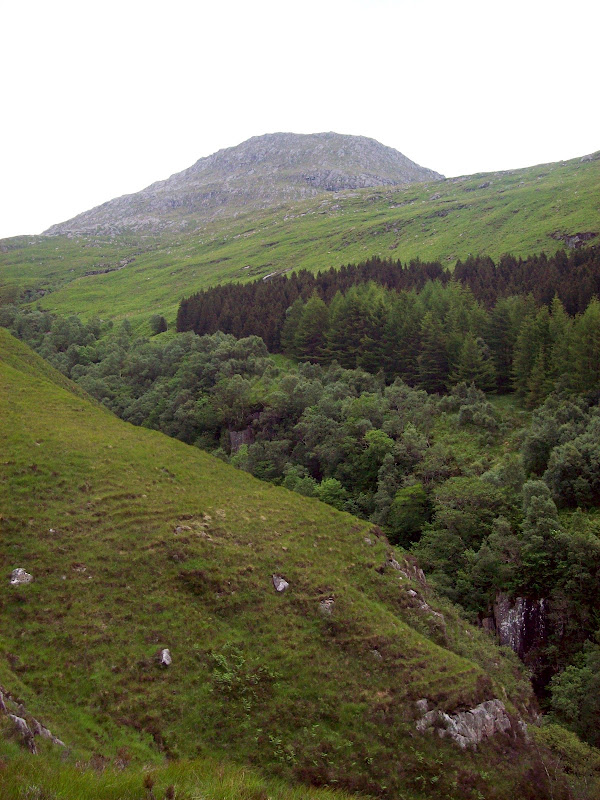 Heavy going lower down on the north bank of the Alisary Burn, with more undergrowth and a couple of fences to cross, but soon things opened up. There were a couple of short descents to cross tributaries, but before long I was crossing open ground heading for the N ridge of An Stac. While the weather was poorer than the last couple of days, the views to Rum and Eigg were still opening up. 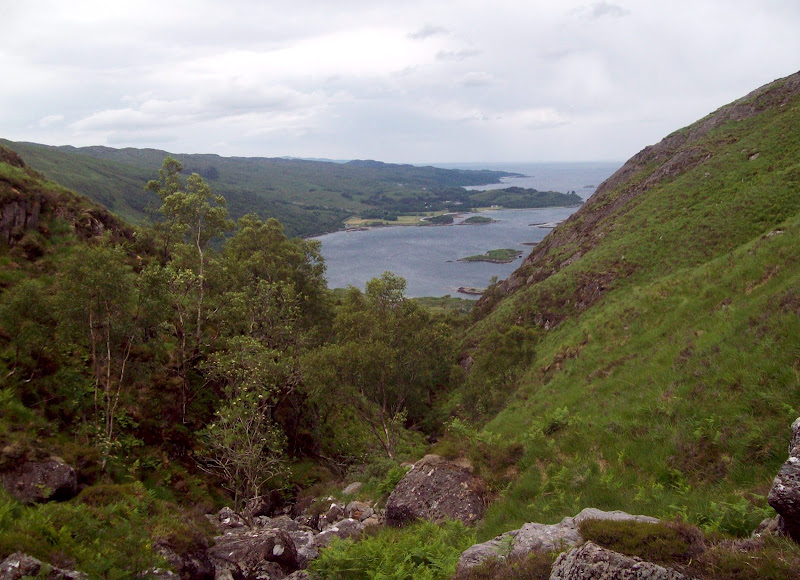 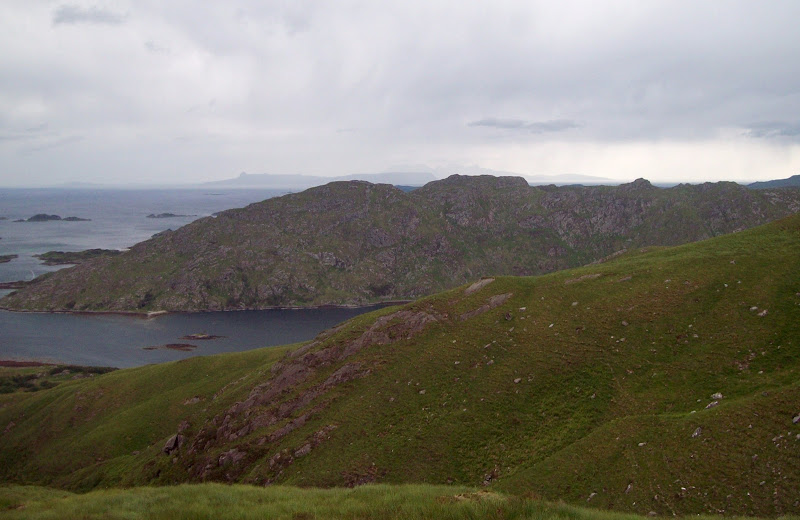 Skye Cuillin peeking over the hills to the NW: 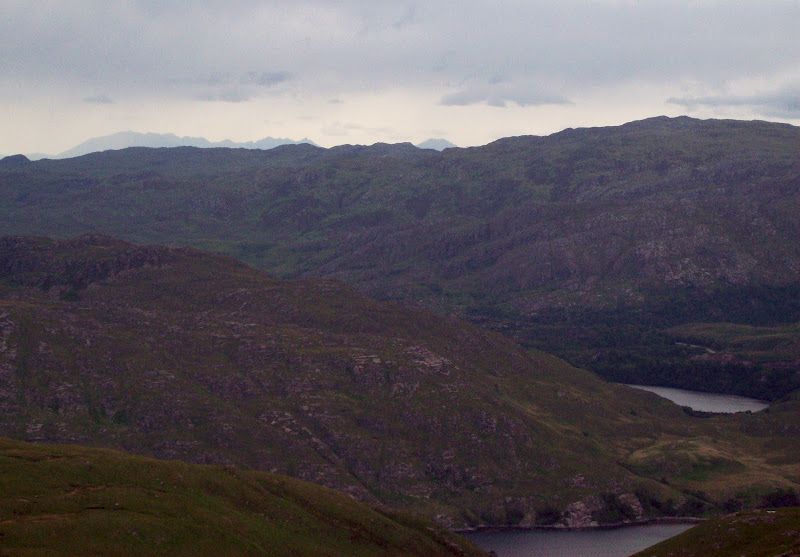 Once on the north ridge, there was the faint evidence of a path winding up through the broken crags. The summit came after 90 minutes, and with it some fairly strong gusts of wind - the sort that are difficult to stand up in. For once I was glad that this was a quick up and down - better weather may have seen me continue a mini-round over Rois-Bheinn. As promised by the forecast, things looked much grimmer to the east of Loch Linnhe. 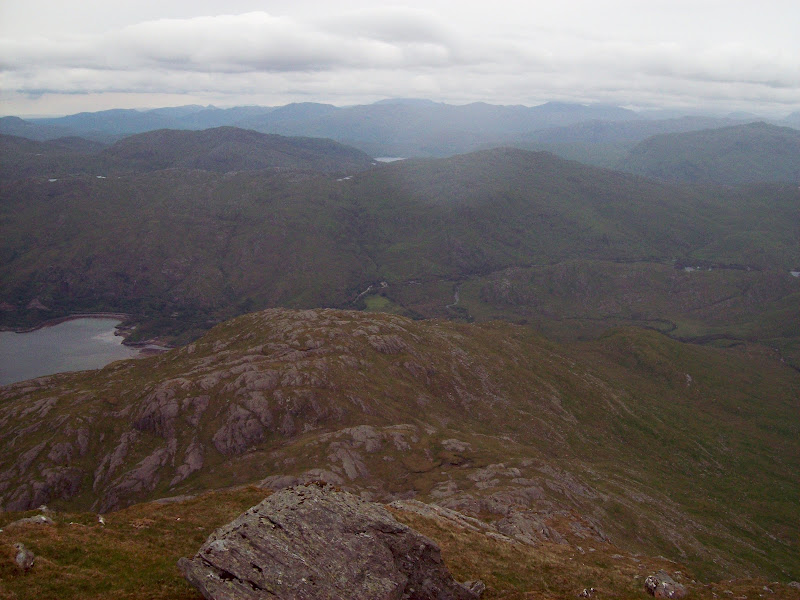 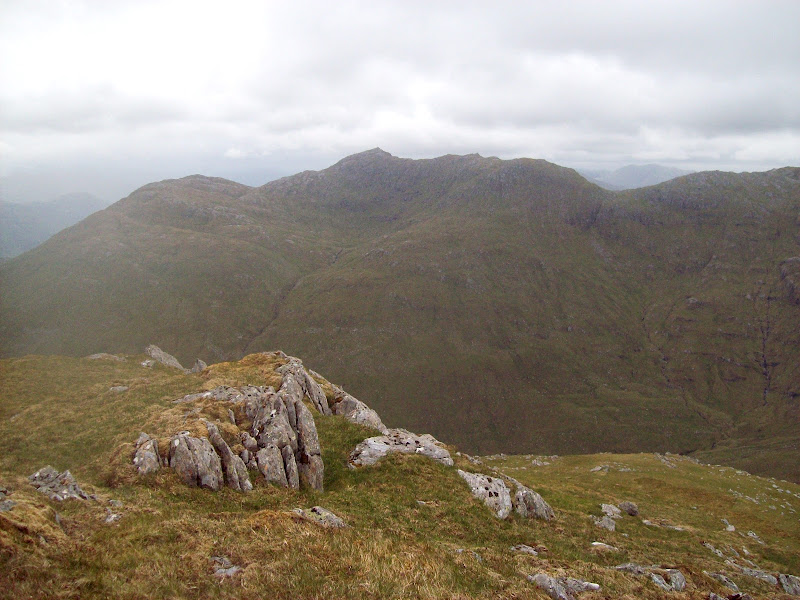 Similar terrain led me down to the col where I picked up an old wall. This took me down to the south bank of the Alisary Burn, where a faint path developed along the edge of a gorge. I vaguely remembered descending this way on my first visit, then following the road back to Lochailort. In retrospect it would have been just as quick to include An Stac. 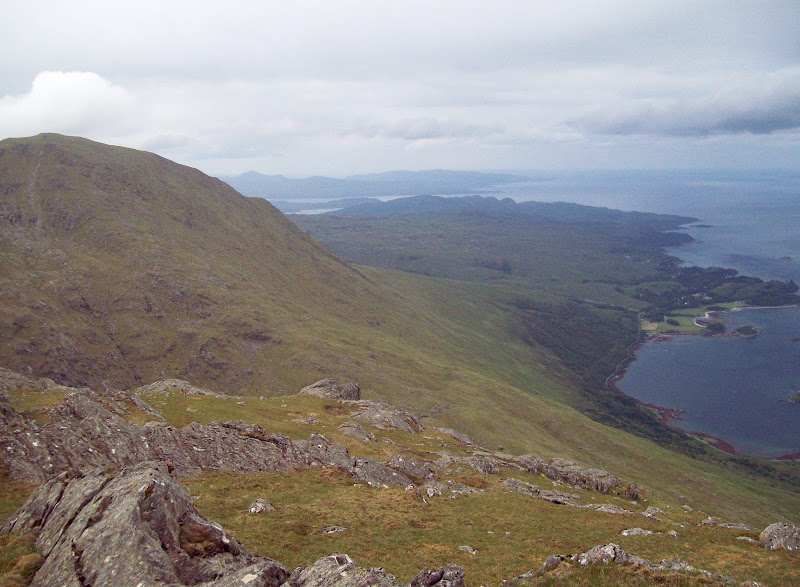 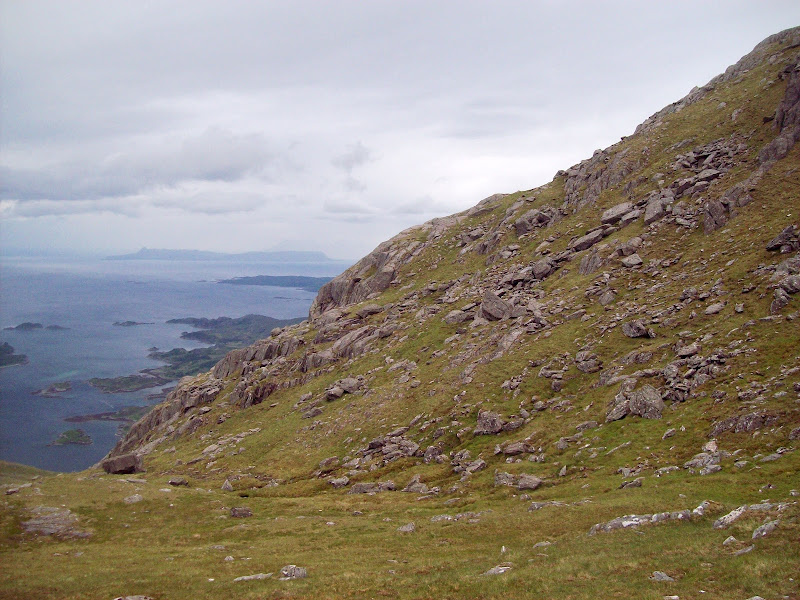 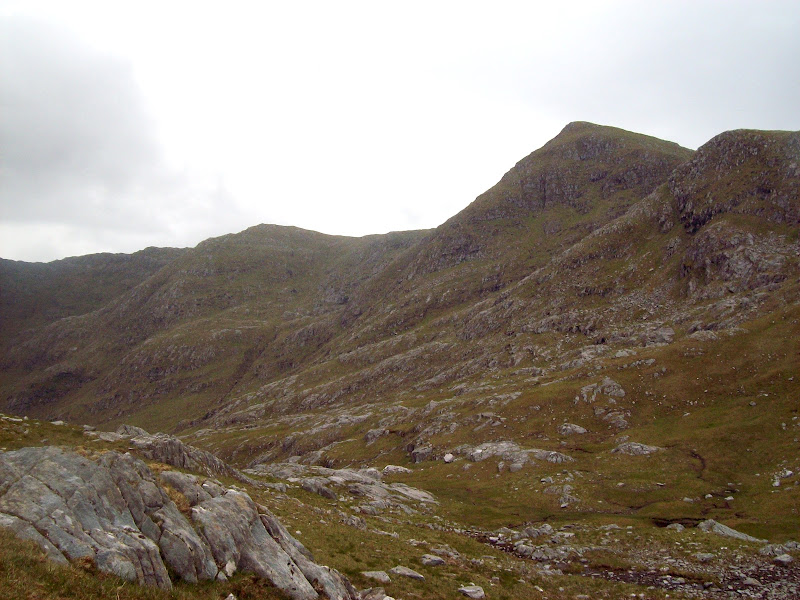 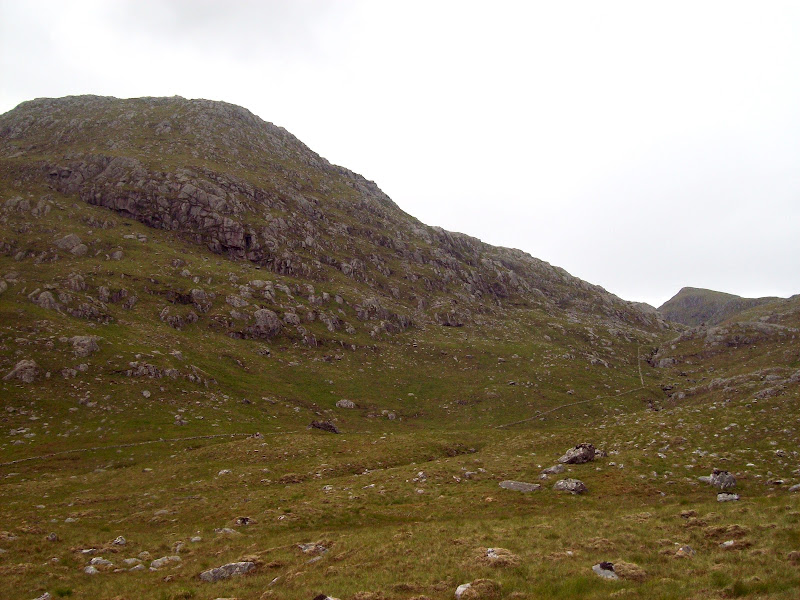 The mouth of Loch Ailort: 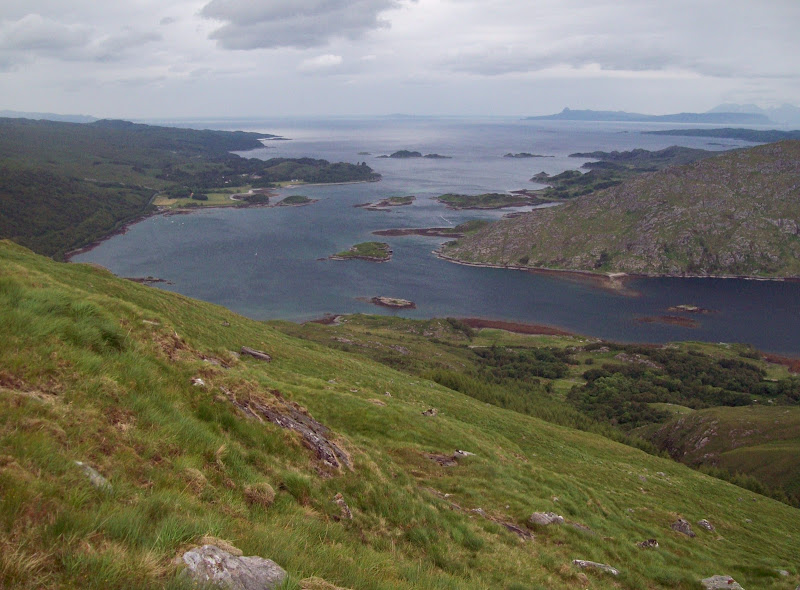 Gorge on the Alisary Burn: 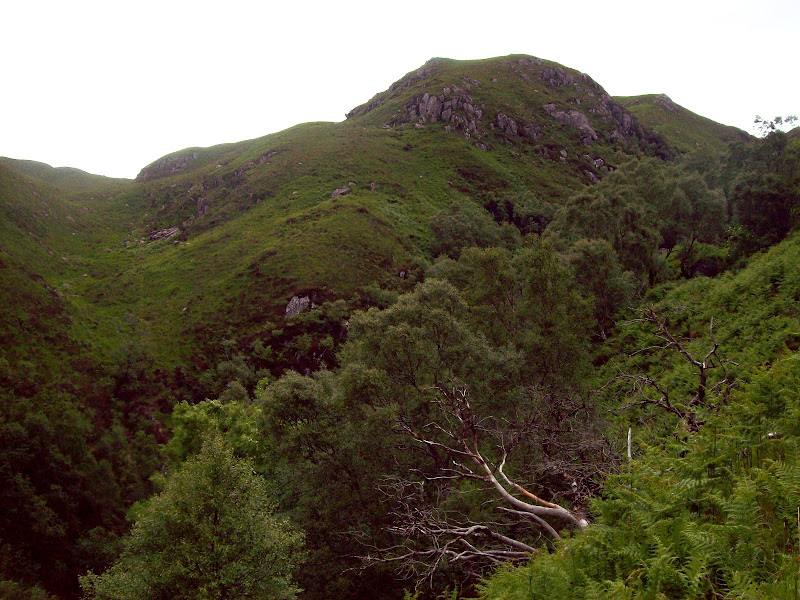 Lower down the path crossed the drive to Alisary, then picked up the burn before petering out in the trees. Climbing another fence brought me back to the road just across the bridge from the car. 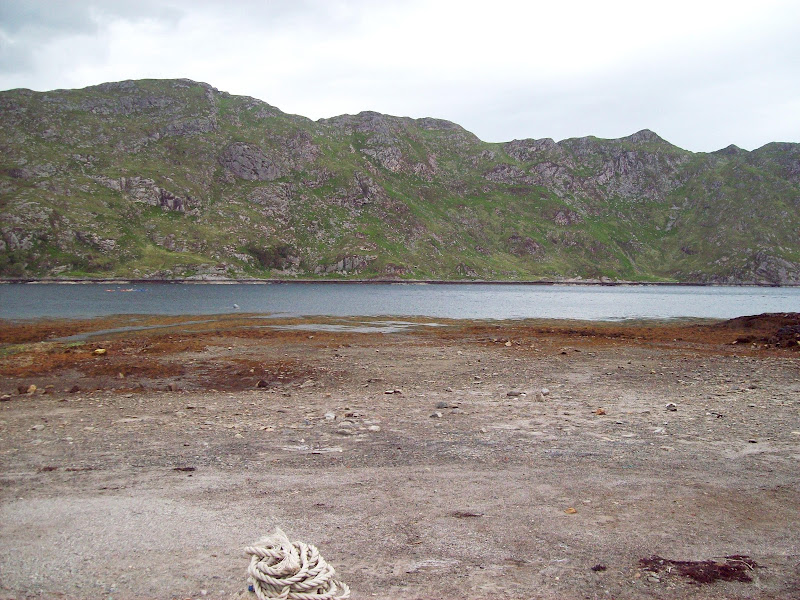 Not such bad conditions in the end, and I had no guilt in dozing the afternoon away on the sofa, before having a short stroll around Glenfinnan. A nice round-up of an enjoyable 3 days in the area. Unsurprisingly, we didn't meet any other walkers at all over the three days.

Nice bit of ascent there malky for a short walk. Good steep sections with some difficult terrain underfoot.

Shame about the weather but the photos aren't too bad

Another little cracker Malky, you seem to be getting a few in of late, the snoozing the afternoon away bit sounds right up my street