Lawers7track.gpx Open full screen  NB: Walkhighlands is not responsible for the accuracy of gpx files in users posts

The Lawers 7 was a challenge me and my walking partner Gregor (gman27) had decided to do this year once the longer days were back. It was decided a fortnight or so ago that Sunday 17th June would be the day come rain or shine (Or whiteout as it turned out!).

The original plan was to park the car beyond the reservoir behind the Lawers Dam with a second car parked along at the Lawers Hotel for when we finished. About a week ago that plan fell apart when the second driver pulled out the walk. It was surprisingly difficult to talk someone else into climbing 7 munros in one day

so we decided to go for it anyway and walk back along the main road to the start point once we got to the Lawers hotel. Seemed like a good idea at the time...

I picked Gregor up at 4:30am and we were parked up and ready to go at 6am. I had decided to wear my summer boots as they are lighter as I thought this would help since it was going to be a long day. Within 50 yards of leaving the car through the long grass, which was soaking due to the heavy rains that had fell all Saturday, my boots were soaked through and my socks were wet. Good start!!

I should actually call this report "The Lawers 7.5" due to a slight navigational error we made at the start

Instead of heading in a North Easterly direction from the car straight towards Meall a Choire Leith we for reasons unlnown to me headed East into the thick mist even though the GPS was telling us otherwise. Convinced that the GPS wasnt working properly we squelched onwards until we were up at munro height (Hence the 7.5

) . It was then we thought it was best to eventually get the map and compass out and check what was going on. Surprise surprise the GPS was fine. After a slight course correction we were back on the correct route, albeit in the wrong direction, down the dip and back up and onwards to the first munro of the day. Absolutely no view whatsoever so only the standard summit flag shot to show for it. 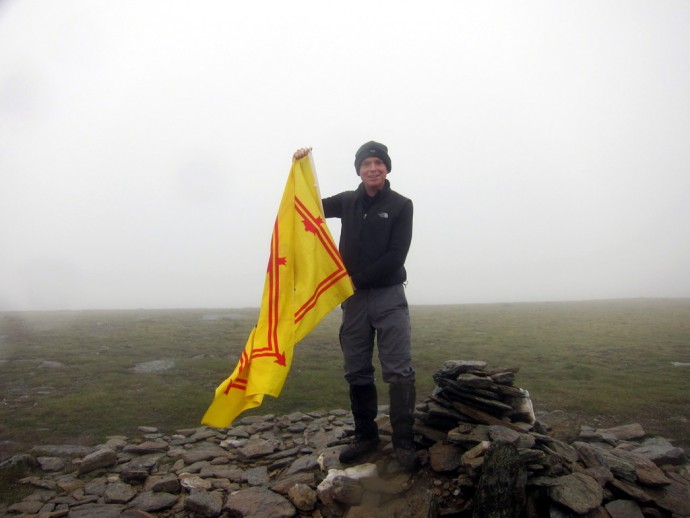 We headed off pretty much straight away towards Meall Corranaich. This section of the walk was quite enjoyable with no major obstacles. We reached the second summit 2 hours after leaving the car. Still no views.... 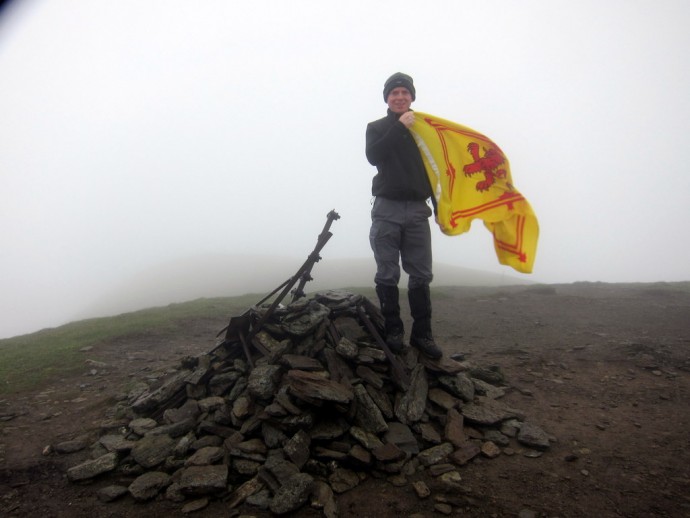 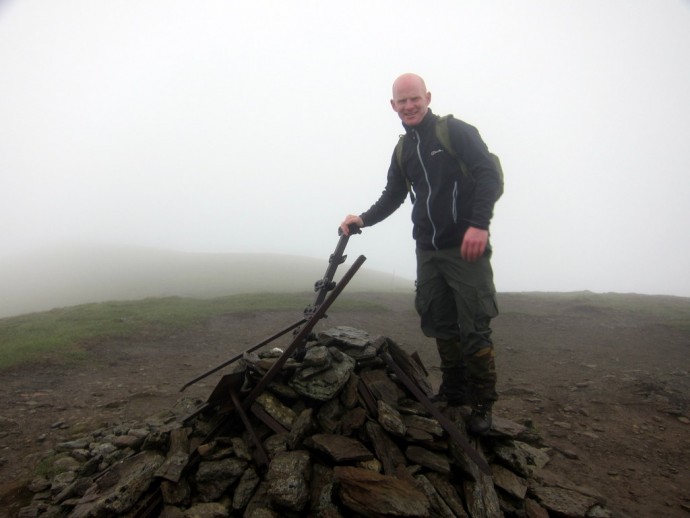 From here there was a well defined path down into the valley until we reached a really craggy section to the West of Beinn Ghlas. The GPS showed the route to be straight up the steep face but there was a path skirting around the side. We followed this path in the hope it would start rising but it soon became clear that this path was not going to go up to Beinn Ghlas. We veered off this path and headed directly up the face of the craggy section. We covered about 200m of elevation before reaching the top. There wasnt much of a cairn on this one and it was a bit cold so we took a quick pic and moved on. 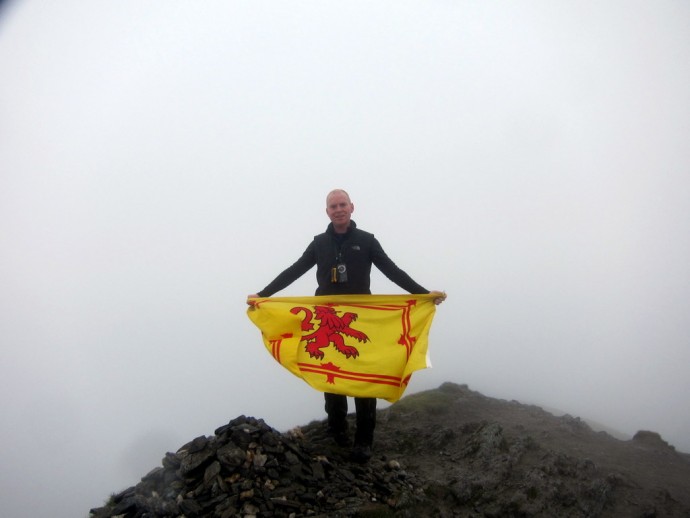 After a couple of mins of walking I realised my head was cold, this then made me realise id left my hat at the summit - doh! Thinking I would probably need it for the rest of the walk I headed back to the cairn to retrieve it and then jogged back to meet Gregor again. We took this as a good opportunity to stop for a bite to eat, some hot coffee, a change of socks and a fresh t shirt. The dry clothes were a real morale booster and before long we were heading onwards towards Ben Lawers. There was a little bit of drizzle falling but it didnt take us long to reach the top of Lawers. 4 hours gone and 4 munros. 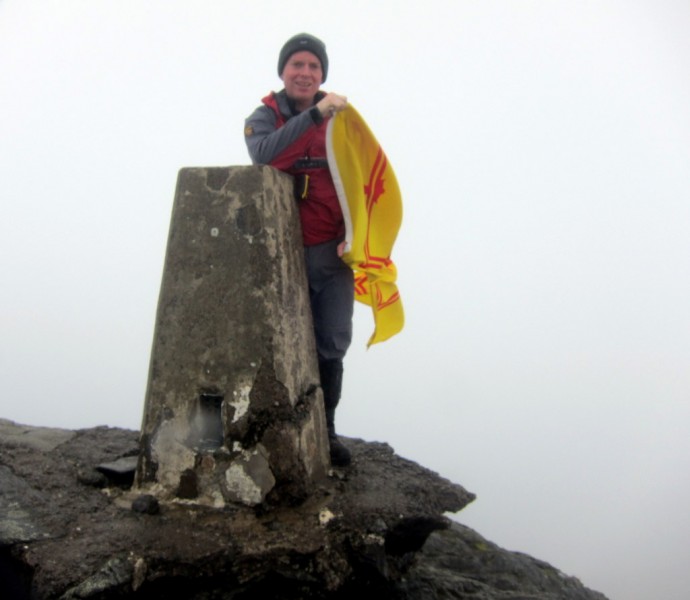 From Lawers we headed towards An Stuc into uncharted territory in terms of munros in a day. As we were descending into the bealach before the final climb up An Stuc the whiteout began to clear ever so slightly and we got our first partial view of Lochan nan Cat. We were starting to tire by this point and the climb back up from the bealach was pretty slow but we got there in the end. 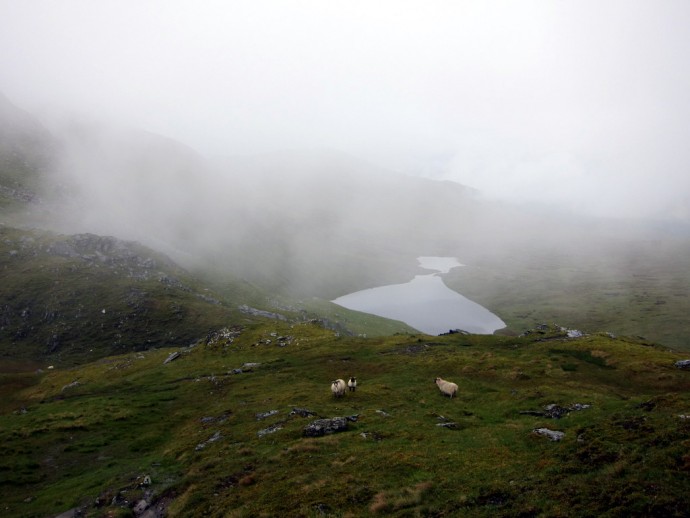 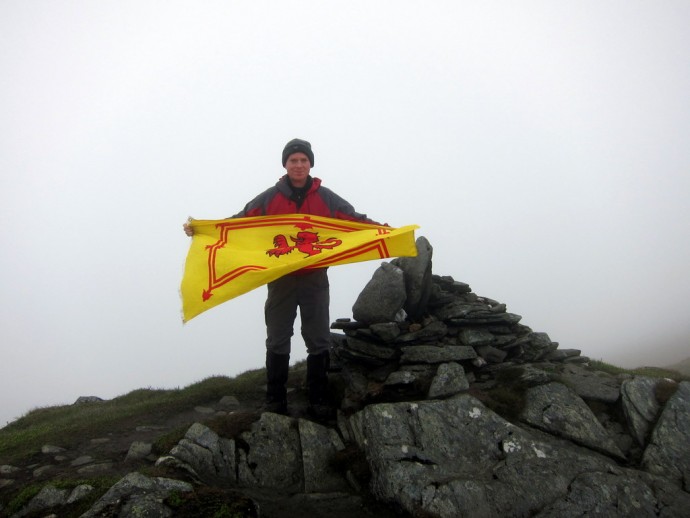 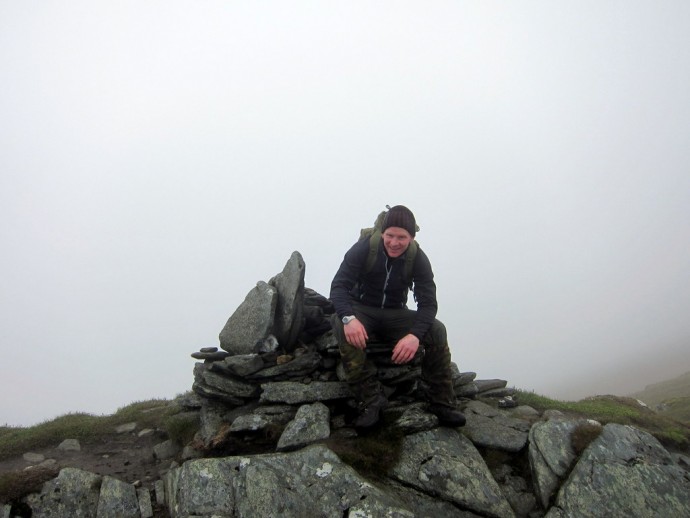 Gregor on An Stuc

People had warned me about the climb down from An Stuc and I had read a few reports previously about it. At first I was wondering what all the fuss was about as it was fairly straight forward but then we got to the really steep stuff with all the mud slides and loose material. It was probably good that we couldnt see much because of the mist as I reckon it would have been scarier if we could. The fact that the two of us were limping like old men on all the downwards bits by this point was not helping at all

Our knees aint what they used to be... 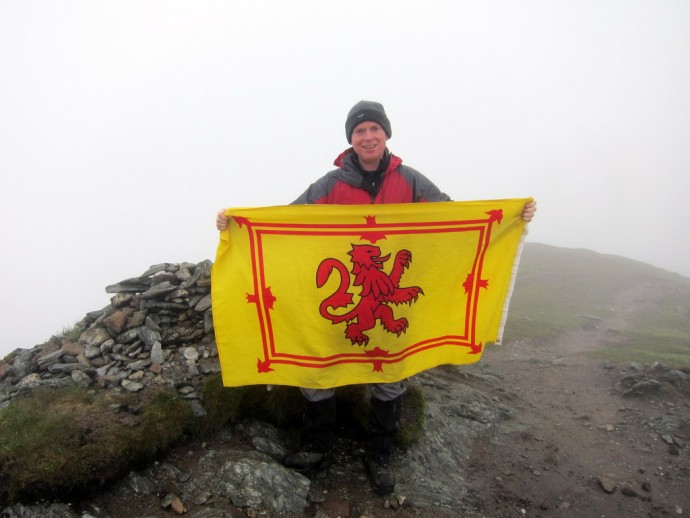 After leaving Meall Garbh for the home stretch towards Meall Greigh the mist had lifted and we could actually see the summit cairn in the distance. It looked deceptively close but as we headed down into the valley before starting the ascent it wasnt getting any closer!! 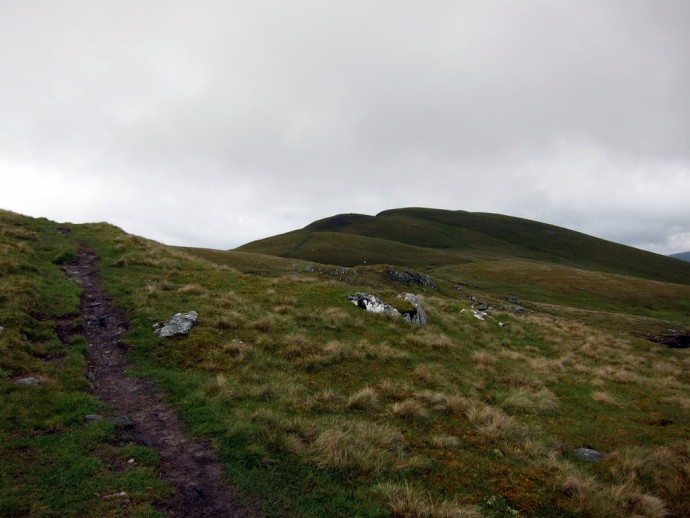 On route to number 7

Finally after 7 hours we reached the 7th summit. What a feeling! 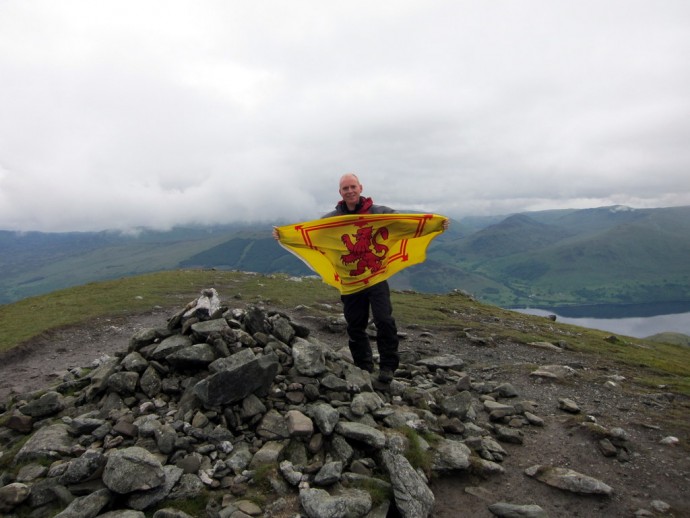 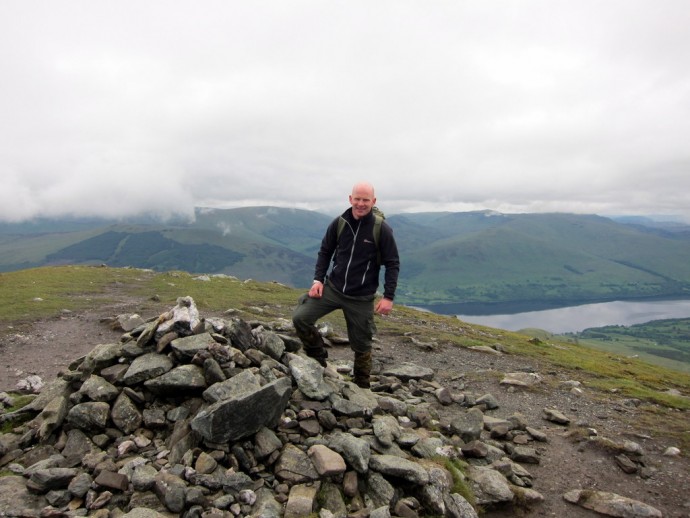 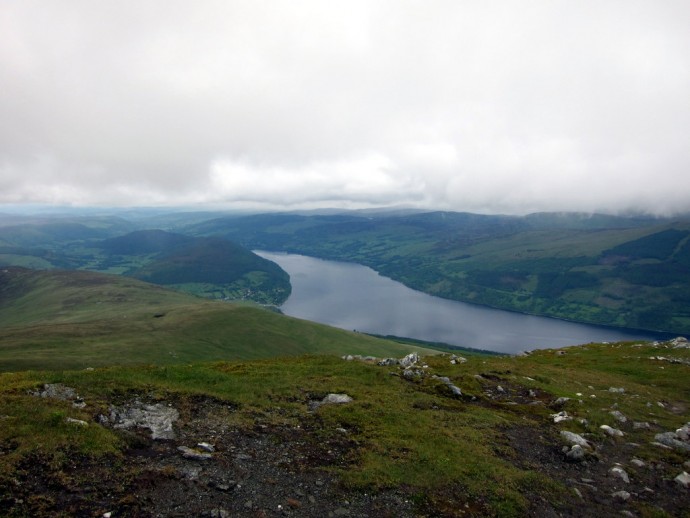 Views of the Tay 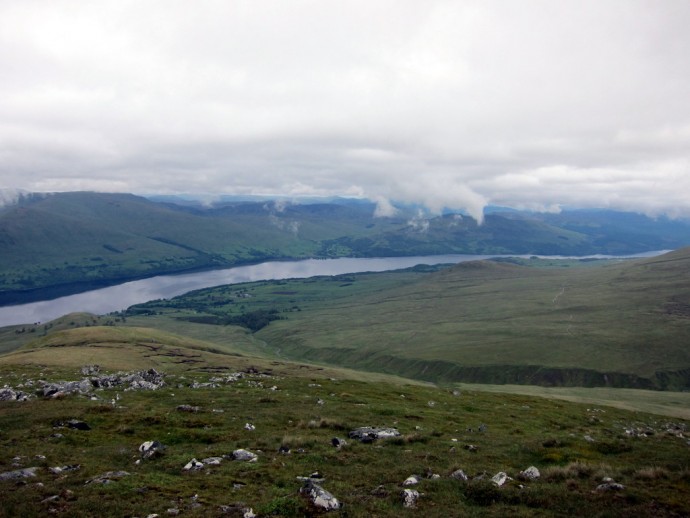 Views of the Tay

From here we headed down towards the main road and the Lawers Hotel. This bit was never ending, and we limped most of the way fuelled by mars bars and energy drinks. Upon reaching the main road the realisation of how horrible the next few hours were going to be hit home. Initially we thought we would just set a good pace and fire through it but since we both had multiple aches, pains and injuries the pace we set was painfully slow. We tried hitching for every car that was going our way but no one stopped. After 3 hours we were back at the car, 11 hours after we had set off. I couldnt walk last night but its all alot better today with only minro aches and pains and a couple of blisters.

Moral of the story: If you do the Lawers 7 take 2 cars.

Cant believe no one stopped for you! Its a shame people are so unfriendly! But great reading about the report and the walk!! Like the idea with the flag!!

Nice report XP, what is it with everyone doing these really long walks

Again, I'm hoping to do these (over two days) next month. I'm starting to feel a bit wimpy!

Not the best end to the walk, shame no-one offered you that well deserved lift.

Mountainlove wrote:Cant believe no one stopped for you! Its a shame people are so unfriendly! But great reading about the report and the walk!! Like the idea with the flag!!

The flag thing is a habit that once I started I cant seem to stop now, trying to get it to the top of all the munros. Its also been all over the world with me throughout the years.

We had thought of taking bikes and leaving them at the end, im glad we didnt though as we would not have been able to cycle them. I wish we had thought of parking at the end and cycling to the start though! Ah well.

skuk007 wrote:Nice report XP, what is it with everyone doing these really long walks

Again, I'm hoping to do these (over two days) next month. I'm starting to feel a bit wimpy!

Not the best end to the walk, shame no-one offered you that well deserved lift.

Thanks skuk007. Two rather wet looking guys limping along the road probably wasnt the most appealing sight for people to invite into their cars, we were hoping for a white van man to pass but no such luck.

We did have the 2 cars when doing this....that walk back must have been torcher!!

Perhaps leaving 2 bikes at the end would have helped your cause.

but after descending from Meall Greigh, I headed for the track which went around the bottom of Ben Lawers so I didn't have to lose too much height. The track ran out though and it wasn't much fun after that.

Fudgie wrote:I only did the 5 in one go

but after descending from Meall Greigh, I headed for the track which went around the bottom of Ben Lawers so I didn't have to lose too much height. The track ran out though and it wasn't much fun after that.

I saw your report mate, lovely pics!. We were very tempted to take the track as it looked a more direct route but the section after the track ends put us off and we thought we would make better time on the main roads.

Good effort. I did the same 7 munros a couple of weeks ago. I started from Invervar in glen lyon, and went clockwise, starting with meall greigh and finishing on meall a choire leith. The descent and walk back through glen lyon was on farm tracks and felt a long way, but in reality took about an hour I think. Whole trip took me about 12 hours!

xpfloyd wrote:Moral of the story: If you do the Lawers 7 take 2 cars.

Bit of an epic there XP. There is a shorter & quicker route with only one car.

Starting at the same spot, do meall a' choire leith first. Then head to meall garbh, out & back to meall greigh. then head back along the ridge to your car. Its about 15 miles, and took me 8 hours.

excellent effort guys. A bike would have saved some pain.