I found my way up a windy hill road to the small "carpark", with a sign for hillwalkers, then spent a while finishing a coffee, having some muesli, but no amount of preparations looked likely to clear the clouds. After coming this far, I was committed, so set off around 8:45 am with the air damp and cool, cloud level under 600m judging by nearby hills.

Good track through the farm for a mile or so, then a path across damp moors, alongside the remains of a stone wall, to where the ground rises towards Carn Liath. Saw a couple of deer (through the mist/bottom of the clouds) and heard a cuckoo calling over to the west. Steep enough to keep warm and get me out of my jacket, scattered stones and a scree path but reasonable footing. I reached the top of Carn Liath in about 1.5 hours, where a runner caught up with me. 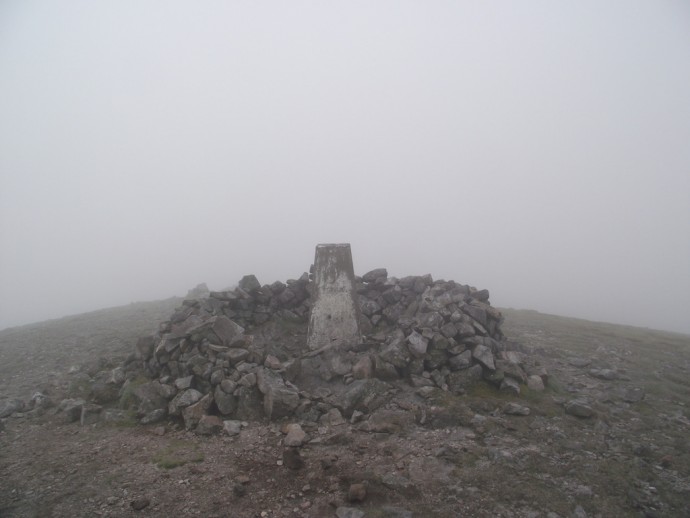 Setting off after a snack, the runner soon overtook me, the only other person I met while up in the clag. The ridge dipped and snaked, with scattered rocks but a gentle descent. Walking through the cloud meant no views, but there was just enough visibility to hint at steep sides and high corries. Then a long pull up to Braigh Coire Chruinn-bhalgain, which felt more than the climb to the first Munro, until I reached its top shortly at 11:30. The cloud was at least as dense and quite chilly, so I changed to a fleece over my merino T-shirt. The mist beaded on the fleece, but I was keeping a comfortable pace that kept me warm and it wasn't wet enough to need anything more waterproof. 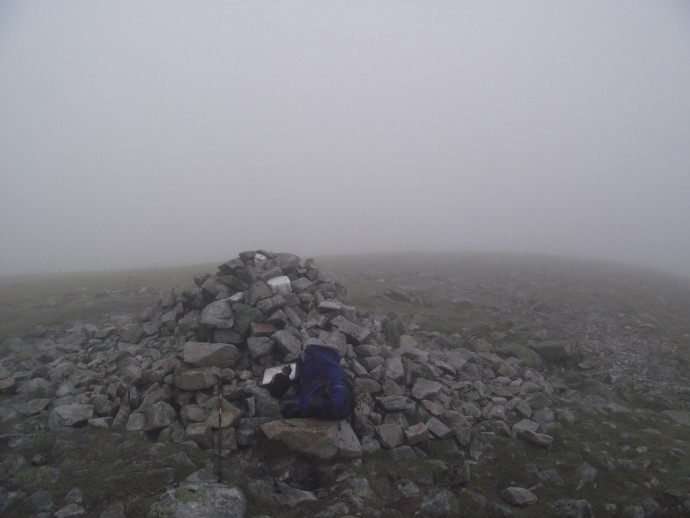 Headed along to the north top beyond Braigh Coire, but still no views, so tentatively sought out, then descended to, the bealach. Clouds close enough that it could have been very easy to descend too far north or south, but after the walk along the ridge, found the place and avoided crags. A peaty bealach, with the makings of burns, but in the damp cloud I hardly need to drink much more than the droplets gathering on my beard!
What felt like a long, though tiring rather than very steep, climb to the shoulder of Carn na Gabhar, then a haul up and over the boulder field to the trig point, then another quarter-mile (which felt much more in the mist) to the highest cairn. The map, a few dozen metres' of visibility and the "feel" of the hill told me that there were sloping sides and corries down there somewhere, but I wasn't getting a look at them today. I paused in the shelter of the cairn, though the cool northerly breeze wasn't doing anything to shift the persistent cloud, for a few oatcakes since it was well past 1, though I had less appetite than I'd expect. 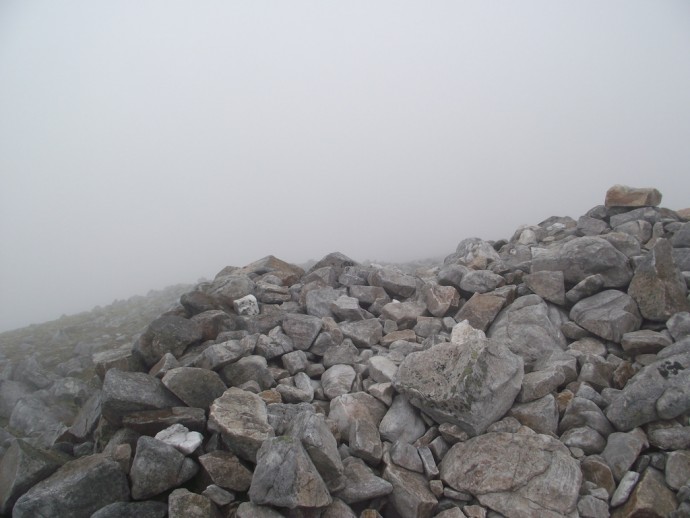 Descending to where the boulder field thinned, I then decided to return across Airgiod Bheinn. From the map (and hazy memories of browsed walk reports here), I expected an occasionally narrow, though far from knife-edge, bouldery ridge, descending in the right direction. That's about what I found, with a path which showed then faded here and there; clearer visibility might have put me off. Since, after a long haul down stone-strewn slopes, the path that I was following resorted to zig-zagging down a few steep stretches. Some of these felt too steep for my walking-poles, so I needed to use a hand now and then, and that was in pretty dry conditions.

I probably left crossing the Alt rather late, wanting to skirt around Beinn Bheag - even the upper part of that was lost in the low clouds. Walking out, there seemed to be interminable stretches of boggy moorland and heather, though I kept my footing (and my boots fairly dry). Reaching the tracks, for some reason I went by instinct rather than checking with the compass, taking me out of my way until a gate and bridge proved that this was NOT the way back. Several miles, which felt more, of tracks, with pee-wits calling and sheep and cattle watching impassively brought me back to the car, where I snacked, de-booted then headed off.
The cloud may have lifted a little, but not much, and remained at that level for the rest of the afternoon (then evening and night), but what I missed in views, I gained in practice and confidence managing the distance and terrain.