After a Wednesday of low cloud, showers and rain, the forecasts suggested a chance of the weather clearing on Thursday afternoon. In an optimistic mood, and feeling fresher after a lazy day, I decided on the Glyn Lyon Horseshoe, with hopes of views across to Schiehallion.

Knowing my pace from earlier in the week, I decided on an afternoon start, not that I had far to go but due to the weather forecast (and anticipating that I'd get round in under the suggested 6-8 hours). I reached Inverar at about 1pm, found the walkers' carpark (on the south side of the road), read the notice which recommends the same clockwise route as WalkHighlands, had a few oatcakes and was off before 1:30.

The clouds were up above the treeline, but didn't look like budging yet, as I passed gates and styles, finding the track which climbed the first couple of hundred metres through woods and then around their side. The conditions were cool without being cold, damp without raining (at least, not yet).

I found the small (and rather rickety) footbridge crossing for Carn Gorm, then followed erroded traces of path around the slope between the alt and the edge of the forestry. But I fairly quickly lost the path, if there is one, so was left to slog my own way up the hill. I soon reached the mist, which proved to be cloud, restricting visibility to a hazy hundred metres, give or take. But, after angling south of westwards, I found the shoulder of the hill, with gentler slopes. There was also a path to help confirm that I was going in the right direction (or getting lost where other feet had gone before).
It was cold and damp, though with brief showers rather than enough rain to make me slow down and resort to confining waterproof layers. I passed some snow patches (just about large enough to make a snow angel, had I felt like cooling down further), then a short slightly steep stretch to Carn Gorm itself.

From there, I descended, using walking poles and care due to damp grass and stone. I followed the path around the top An Sgorr, reached a peaty bealach then made my way up the shoulder of Meall Garbh. That was stony, though not tricky going; I visited the cairn, then a second cairn a few metres lower to the east. But the clouds clung on, deterring me from visiting more outlying tops, especially since I could glimpse that would have required going out-and-back or up-and-down further distance without getting any more of a view in exchange.

I followed the handrail of metal fence-posts for a couple of miles as the boundary turned, rose and fell, along the easy ridge between Meall Garbh and, eventually, Carn Mairg. That did involve some steeper slopes (and some crags off to my right, though still without the visibility to show them off). So I stayed clear of the presumable drop and turned back left to reach the top. There were no views of Schiehallion, peer as I might, but time for another break and snack before carefully descending to the next beallach to the east.

With little hope of views left now, I made south to and over a broader beallach, following a walkers' path, rather than heading east. There's a modest climb to each of the Munros in this group, but the last haul to Meall nan Aighean felt more than its approximately 160 metres. My reward was a cloudy glimpse and the sound of two ravens, I believe, croaking on a lower outcropping to the northwest. The sun had failed to meet its 4 o'clock appointment (maybe it didn't watch forecasts), so I headed to the western top of Meall na Aighean (or Creag Mhor, if you prefer). Some steep-ish slopes, though veiled by mist, hinted at its cragginess.

With a faint breeze failing to shift the clouds, I headed west, rather than north to the bealach, giving me a slog across damper ground while the clouds parted (or just clung to the hilltops), giving me a view across to some of my route up Carn Gorm. The middle of the horseshoe

I reached the descending path. I tried taking a track south from that, but contrary to my OS map and expectations, it seemed to lead east round the slope without another route towards Inverar. So I picked my way around a shoulder of hill, joined the main descending footpath, then followed that down through the woods to the houses and, beyond, my car. The clouds were finally lifting and lightening, though a couple of hours later than I'd hoped, letting me see why Creag Mhor is so called. But it was time to be off to get myself fed and rested for another shot at some hills tomorrow. 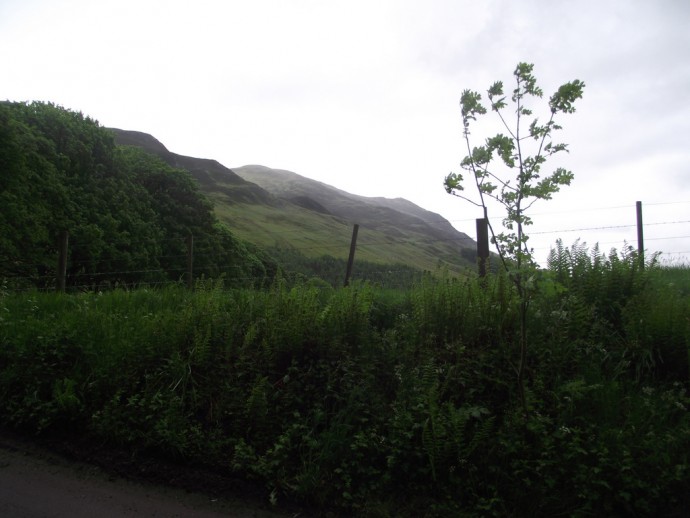