The prized Lurg Mhor for my 200th

The prized Lurg Mhor for my 200th


As the forecast for this area looked ok, Kim and i decided to head up to get some of the remote Munros done. We drove up on the Thursday, leaving the car at the forestry car park in Craig. Here we loaded up the bikes, taking panniers which allowed us to take the luxurious items otherwise known as pillows in the hope we would sleep well in the tent. Once loaded up we cycled as far as Pollan Buidhe, ok i say cycled, but we walked a fair bit of it as most of it was uphill but i can honestly recommend taking a bike for this trip as the cycle back out is effortless. Once we reached Pollan Buidhe we found a camping spot beside the river and set up camp for the night. The following morning we set off for Lurg Mhor via Beinn Tharsuinn and Bidein a' Choire Sheasgaich, leaving at 08.45. The weather was not good, with low cloud and high winds but at least it was dry. We took the path upto the Bealach Bhearnais and then up Beinn Tharsuinns ridge, first to the 817 mark then to the summit. From the summit we headed to the Lochan and along another ridge, it was here we got our first sight of Bidean a' Choire Sheasgaich and it looked as though there was no way up. Kim asked at this point which way we were going up and i replied "i'm not sure yet, we'll wait till we get closer and see if theres a route up" We left this ridge just before it started to climb and made our way down to the foot of Bidean a' Choire Sheasgaich. Once there we followed the stony scree path up towards the crags where it led to a rocky gully, similar to the Chimney on the Aonach Eagach. Kim again questioned where we would be going and i said "well this is where the path leads", she quickly replied "that's not a path". My 200th was now in jeopardy

. "Right i'll go up first and let you know what it's like and then you can follow". "Did you read up on this walk before you left?" was what i heard as i climbed up the gully, which had plenty of holds and was straightforward enough. I never answered Kims question as generally i don't do too much research before heading out as everyone has differant opinions and tolerance levels and would rather find things out for myself. "It's fine" i shouted "so up you come". Kim slowly made her way up and agreed that it wasn't too bad but worse was to come as there were other sections to negotiate which were not as easy looking in Kims eyes. Again i went first but when i gave Kim the thumbs up she refused to come up. I could not convince her and she was not putting her life in jeopardy to get to a Munro summit, a fair point i suppose, though i did point out to her we put our lives on the line everytime we head to the hills but to no avail. Now i had to find a plan B so got the map out and headed round the north west side, here i spotted a grassy gully which was not too steep and we both agreed to go up it and soon we were on the ridge just before the Lochan. We were now on easy street and soon on the summit after surviving our little domestic.

From the summit it was a straightforward walk to Lurg Mhor and my 200th Munro. Kim was now wondering about our return route and i told her we'd head back to the Bealach and down to the Bealach an Sgoltaidh round Beinn Tarsuinns south east ridge and up to the Bealach Bhearnais and the path back to the tent. It was an eventfull walk, a long hard day but worth every effort and it was good to get back to the tent and not have any walk or cycle out. The walk took 9 hrs in total but i'm not saying how long we spent getting through the crags of Bidean a' Choire Sheasgaich. Waterfall near where we camped Path to the bealach Kim on the path 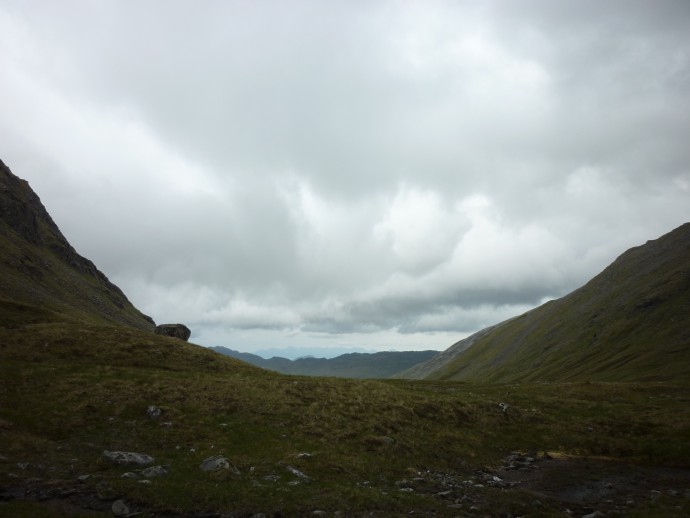 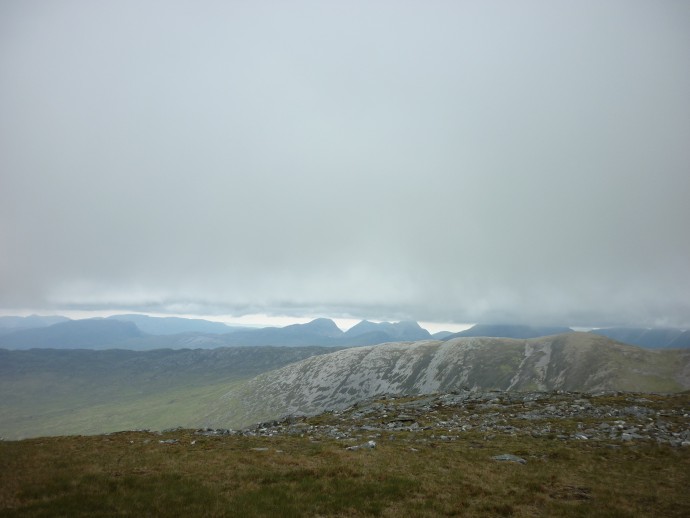 The summit, Kims got the next part of the walk on her mind i think Kim back in her comfort zone leads the way A look back at Bidein Back at the tent

Congratulations on reaching the double century

I enjoyed your trip report and photos, pity the cloud was down on the tops and, glad you survived the domestic

A fine one for a double century

A pair that make you work for the ticks,but they are worth it

We walked in, did two of the Corbetts and Cheesecake and Mhor and out the Dronaig path to Attadale on a roaster of a day, and we were delighted. So I can understand your delight at the summit prize gained on Lurg Mhor

Congratulation!!
Horses up hills...? Thats a sight I have not seen before! That wee scramble looks nice!

Congratulations ...... A milestone to proud of.

Congratulations Johnny and well done to both of you !

Your report is very timely too, as I am in planning mode for the weekend and these two are on the (weather dependent) shortlist.

Well done both! When I get up that way I will remember which way not to go!!

so what is the best way up?

Good to see reports from the remoter areas.....the triple col, the slot onto Sheasgaich (sp!?) and the wilder stuff beyond Lurg.

I used the fine bothy at Bearnais for accommodation.
ML needs to get to the remoter bits of the country to see more of the garrons around on the hills.

Great choice for your 200th JC and a nice little scramble too by the looks of it, not sure if Kim would agree though, she does not look so comfortable in that summit pic

Well done on the 200 Johnny. Shame about that lingering cloud Great report as usual

Fine report for us that still have to follw JC,200 & counting,the end is near.