Having tamed Ben Chonzie about a month, or so earlier Big Jesper had ideas in mind for a sterner test of new boy, McCallum's, fitness and enthusiasm for the hills, so talk of doing four in one day, drew an initial sharp intake of breath. Admittedly, Ben Chonzie hadn't been too severe a test, other than the severe cold, but the prospect of doing four Munro's and a jaunt of some 11 or, 12 miles was a more daunting prospect for the old fella.
As usual, familiar reassurances were given by Charles, so off we went from Mid Argyll, hoping the reasonable forecast wouldn't let us down. It was a lovely drive over the hills past Lawers Dam, to Bridge of Balgie and then to Invervar. (For us it was a special experience to drive on a single track road in perfect condition despite all the narrow twists, turns and steep hills, compared to the farm tracks of Argyll - please take note A&B Council!)
Anyway, we found the wee car park no bother and just managed to squeeze Big Jesper's motor in, before quickly getting the togs on and eyeing up the fancy gear, another walker was getting into. It was about half ten when we set off, past the phone box, through the gate and up the woods, passing the derelict "banana buggy," choosing to tackle the route in a clockwise manner, following the Invervar Burn. We may have followed it a wee bit further than suggested on WH, but don't think this added much to the distance, or climb if at all?
The cloud was still lying a bit low on Carn Gorm, but conditions were looking quite good and soon a good sweat was rolling down the spine, as we crossed the rather fragile, wobbly bridge over the burn. Charles's hunch that we ought to have made a quicker ascent onto the flank of the hill proved to be right, as we looked backwards having climbed up the side, where one can see a more obvious path, which we then followed through the cloud and some snow all the way to the top, which took about two hours, I think. It was still in cloud and pretty chilly too, so we didn't stop for long, before heading on to top number two, Meall Garbh, nabbing some grub and fluids as the cloud began to lift, revealing some nice views.
We (Charles) chose not to tackle An Sgorr, though it looked quite interesting and followed the path to Meall Garbh, which as you will probably have noticed in your researches is characterised by a 'cairn' made of rusty, decayed fence posts. Not very bonny, but different and begs the question I have since found myself asking a few times since - "why/who/when built these fences across the mountains of Scotland??" I realise sheep hill farming was probably more important in days gone by and man has always been keen to delineate his territory, but it seems like a lot of effort to go that far? Answers, or theories most welcome.
It's a bit rocky heading east to Meall a' Bharr, but once up there, one is on a fairly flat plateau and we meandered at our leisure past various cairns and fence posts, hoping for a good view of Schiehallion, which always seemed to grow some cloud whenever I dared raise the camera. The climb up to Carn Mairg narrows to a bit of a stony ridge, but is no problem either, as long as you watch your step and visibility is good. This is particularly true when leaving the summit, as one doesn't want to head south down the crags and boulders! We could probably have chosen a less troublesome path ourselves, so best try to pick out the route others have previously followed. Just for a brief moment Schiehallion gave us a quick flash, with no clouds on and with the camera ready to hand. Good timing for once. 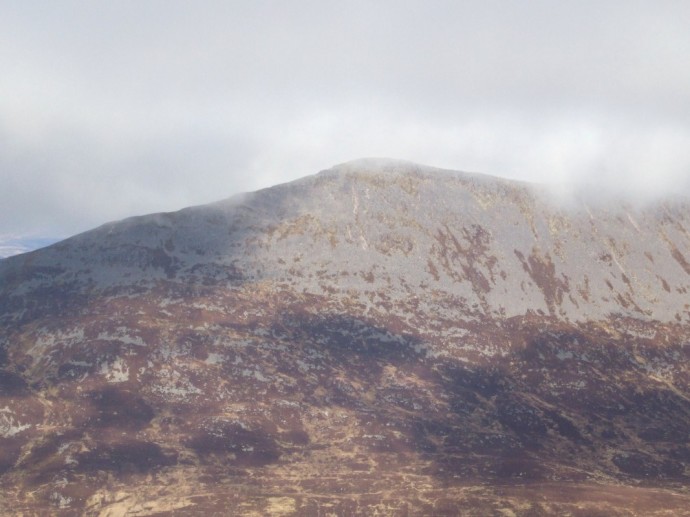 Anyway, we scrambled down some braw, shoogly boulders and were soon back on track for munro number 4, Creag Mhor, or Meall na Aighean, as you chose. Creag Mhor and all four in the bag!

About this time my feet were starting to say "you have boldly gone further than you ought" but there was no going back and I had that satisfying feeling inside knowing that I would pass Big Jesper's latest test, despite there being a good hike still to go. We enjoyed the great views along Glenlyon before heading off down the hill in a southwesterly direction, joining our original path part of the way up the Invervar Burn, then onwards to the car.
All in all, about six and a quarter hours and another great day on the hills, four munro's claimed and still some fuel in the tank, just! attachment=12]DSCF9968_1067_800.JPG[/attachment] The 'shark' on Carn Gorm in the distance. Carn Mairg from south. We came down a bit too near snow. Should have been more to right/north. 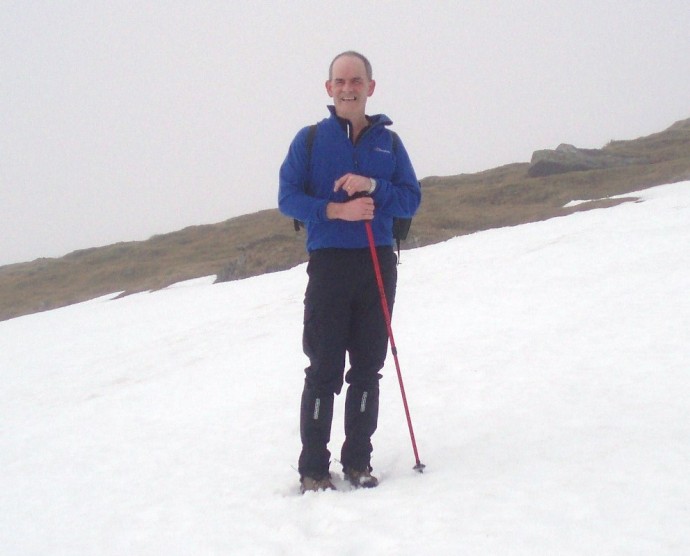 Carn Gorm from NE -anyone else see the shark/dolphin? Well done. Did the circuit at the end of May Glen Lyon is a bonnie glen.

Once again another good report Jimbo.