Suhowfar had decided that she was going to miss out on this walk as she was a bit under the weather and as we had recently returned from a week in Rhodes had an idea of a quiet day in. Also Ruby was resting his paws as he had been in dog care for the week and was also ready for a quiet day in with mum!

One of the great benefits of Walk Highland is the fact that we have met some great folk along the way. So it was a nice surprise when Gammy Leg Walker texted to ask if I fancied a wee trip up to the Black Mount to do Meall a’ Bhuiridh and Creise last Sunday. As I drove up to the Glencoe Resort car park there was the well photographed picture of the Cottage and The Big Bookey. 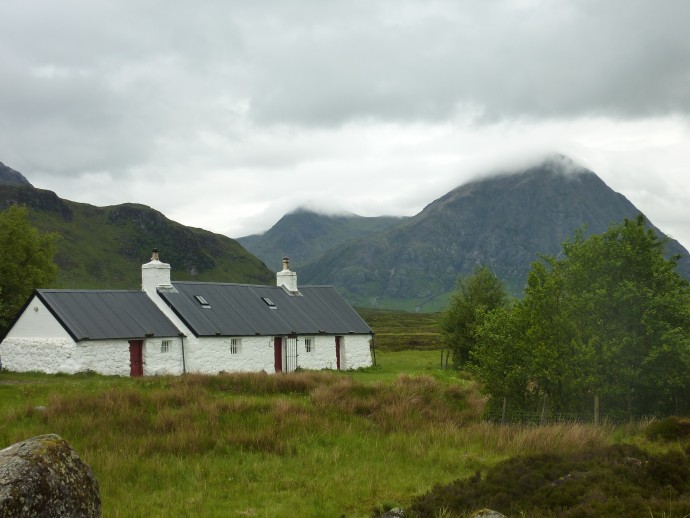 That photo of the Big Bookey

This was dampened temporarily when as we met up a sizeable amount of Midgies decided to in interrupt our ‘hello’s’so we quickly decided to get on with things and headed off the Glencoe Mountain resort car park and headed up the path under the ski lift. 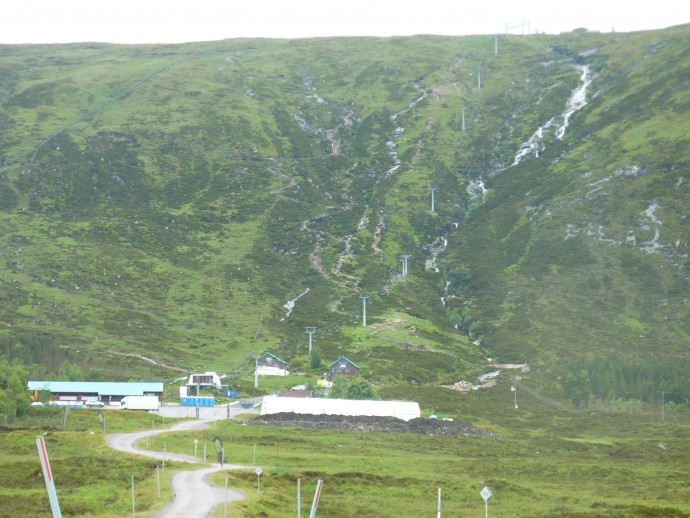 This was quite a steady walk and before long we were at the first ski station and beared a wee bit left to get across the not so boggy ground. 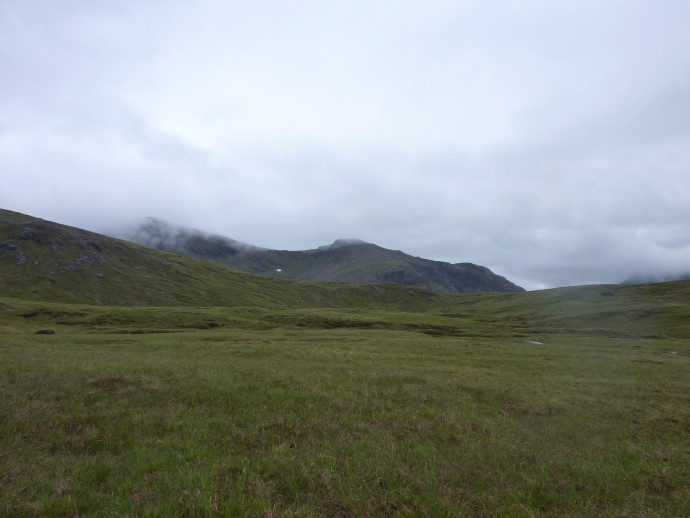 Creise with a bit of clag

From there Gammy took a bearing and we headed straight up which was quite a hard pull but as I was glad to be out on the hills meant that I could live with it. Gammy hadn’t been out for four weeks and at first found the going a bit difficult but as we made our way to the first Munro he was finding it a bit easier. Across to our right as we went up Meall a’Bhuiridh we could see Creise which was in and out of the clag as we ascended in a SSW approach. Gammy does the trick and the Clag appears

Reaching the boulder field it wasn’t long before we reached the summit and the little cairn was reached. 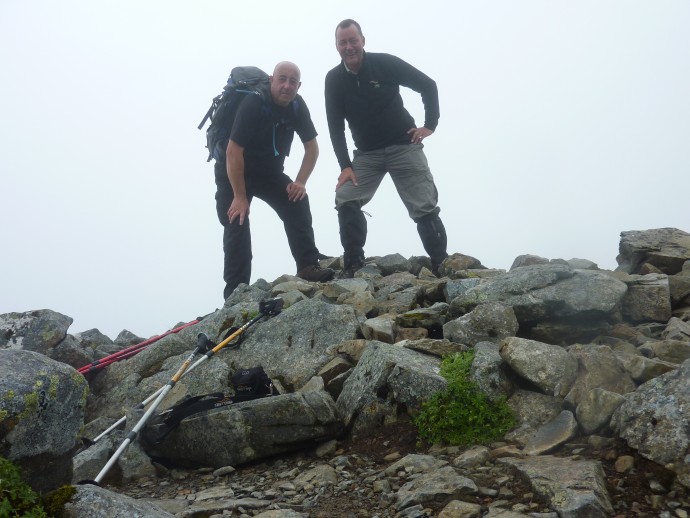 Gammy and yours truly at Meall Bhuiridh cairn

We stopped for a wee bite to eat and then set off to the west south west direction where you easily pick up the path down the well defined ridge. From there it is a straight forward ridge walk down which as you looked back we were able to see Loch an Easian coming into view, as we couldn’t see it with the bit of clag at the summit of Meall a’ Bhuiridh. 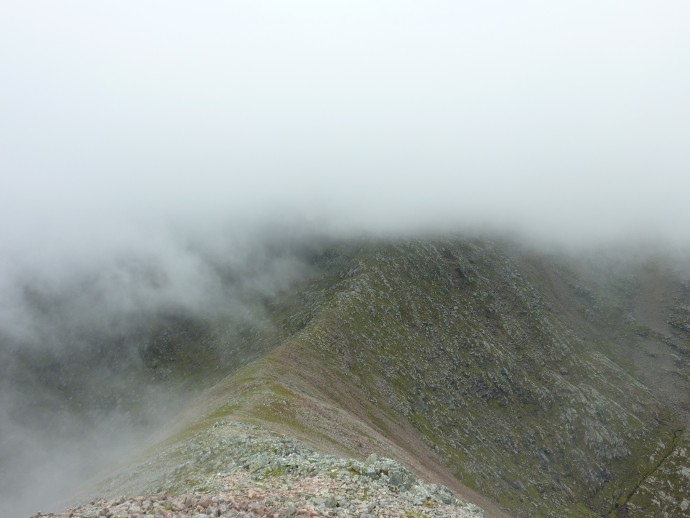 We were then caught up with fellow WH member Jakedog and his companions, who overtook us as we reached the climb to the middle top of the Creise ridge. 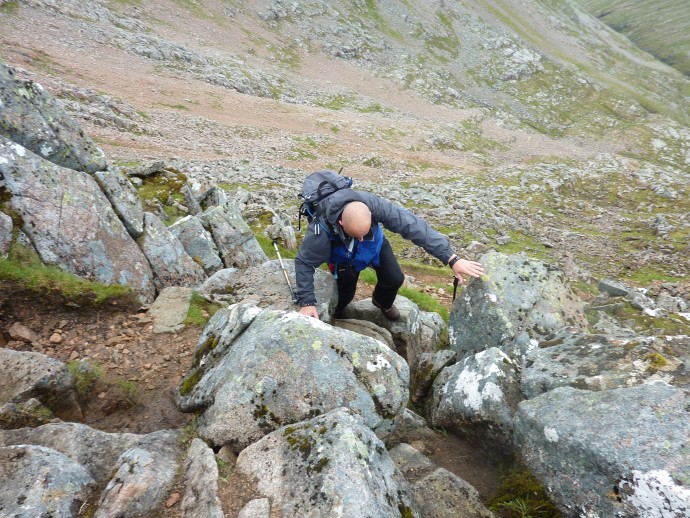 Gammy climbing up to the Creise ridge

Once up on Creise it was a walk to the cairn and Munro number two was done. 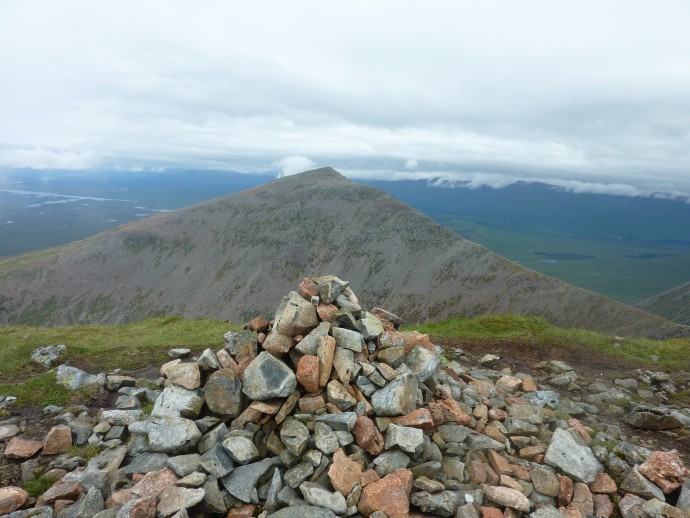 As we were there we left our gear and walked to the cairn at end of Creise. 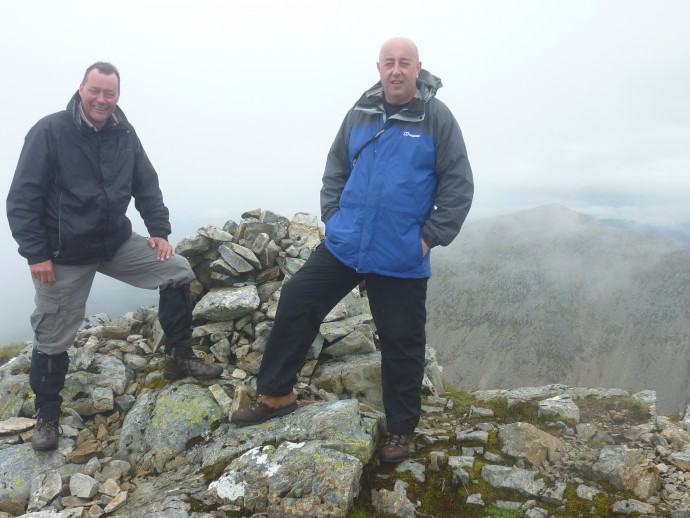 Me and Gammy at Sron na Creise

Once we had a quick bite to eat we headed back the way we came and was checking out the idea of crossing diagonally off the ridge and heading towards the upper ski station. However a gentleman arrived having made it across from that way and didn’t recommend it. So we continued back across the ridge and
we were surprised to see our friend Pat (Aka Morecombe Monkey) who had just arrived in Glencoe and was here for a couple of weeks walking and after having enjoyed a wee blether with him made our way downhill ...Its such a small world ! We made our way down from Meall Bhuiridh by walking down under the ski lift till we reached the car park and a quick drink on the way home finished off a great days walk. Cheers Gammy for the invite and good to get a walk with you again.

So tell the truth, Did he get the chairlift back down coz I dont belive him

So tell the truth, Did he get the chairlift back down coz I dont belive him

He gets nice sunny days with me as well

I don't believe him either

The Clag-Master strikes again. Sorry Brian, there is strength in numbers - you needed more people around to help clear out Willie's clouds. Good to see you chaps out on the hills though. Please tell Su happy birthday for me, I'll rejoin FB once I finish this PhD, but you can always msg me on here.

Yes that was Gammy doing a wee climb up to Creise

Also there is no truth in the rumour of getting the chairlift up or down the hill.....it was working though!!!

Anyway it wasn't needed as we are both highly trained athletes!

Great day jockstar,thanks for the company,clag comes & clag goes but gammy is always out & about.