This was one of the routes I'd considered for the week, though with some trepidation about An Stuc. After several days of quite persistent cloud and intermittent sprinkles, Friday was forecast to be better, especially the afternoon. Having learned my pace, I was confident I could get round this group in less than the suggested time for the route, so decided on an early snack lunch then a midday start.

In the end, I reached the Ben Lawers hotel a little after 12 and so set off at about 12:20. I had visited there while in Killin last year, so knew that walkers are welcome to use their further carpark, provided that you have a meal or drink. Indeed, part of the temptation of this route was the excuse to reward myself afterwards!

The route starts with a short stretch along the road, which dips slightly from the hotel towards the horn carver's showroom. Trivial, compared to the rest of the walk, but "losing" a few metres' altitude so early on feels like going backwards. Then off the road, following signs to keep you on the right track for the Lawers burn path. There's some wriggling and squeezing to be done, maybe to limber you up for what's ahead? Then the path starts to open out (though there are stiles to cross) and you gain height as changing views. 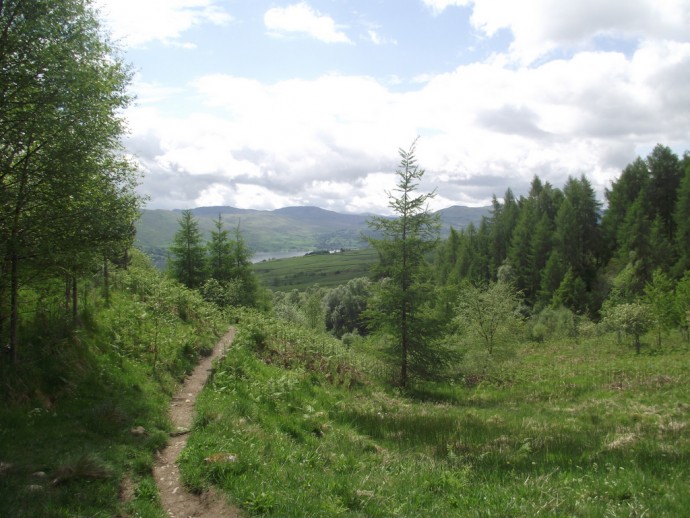 It felt a warm day, especially sheltered rather than shaded by the smaller trees growing around the Lawers burn. I'd chosen my large pack because, though bulkier, it sits comfortably and snugly, but at this stage I felt the weight (and the warmth after days of mist and cloud), so the tall stiles were good excuses to pause and stay topped up with water.

From reading the route, I remembered recommendations to head up the south flank of Meall Greigh early on. So, I left the Lawers burn path soon after a group of sheiling remains, heading across thin heather and slight, but dry, ground. Besides, the path beside the burn dipped down few metres just ahead and I couldn't go squandering my efforts at ascending just like that!

The slope increased in pitch, which was some work in the warmth and sunlight. The clouds were thinner and more scattered, fluffy lumps rather than a covering - or the curtains they had seemed for a few days. I did get some shade for the ascent, heading north up Sron Mhor, the big nose of Meall Greigh. I tended a little to my left, avoiding some crags to my east, aiming for the top and telling myself it would bring me four fifths of the way up the first Munro of the day.

After the slightest dip after the Sron, peaty but dry enough with recent weather, the subsequent slopes felt more gradual - and even had some paths, especially to wend its way up onto the ridge. There was more of a breeze, fresh and fairly northerly. The top offered good views in most directions. I could make out Beinn a'Ghlo to the northeast (far better than I saw of it at the time), Schiehallion closer at hand, and other hills that I'm growing to recognise. 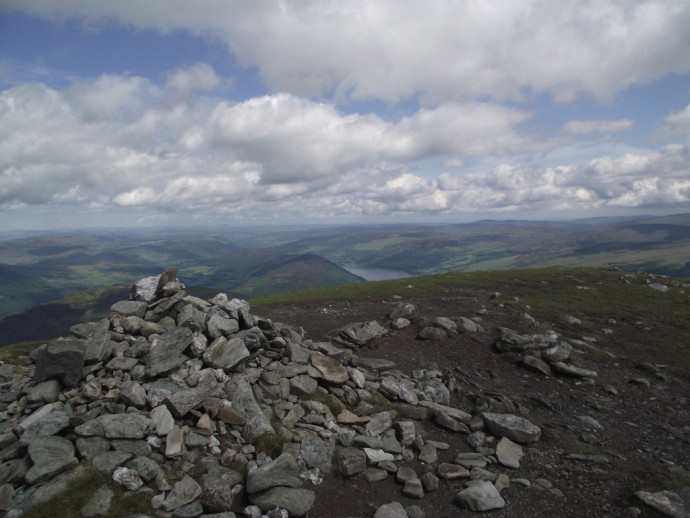 I had taken a couple of hours so far, but the next hill looked a long way along first a broad lumpy ridge, then a peat hag-ridden bealach, with a rugged upwards slope beyond. This proved the case, though there was a sporadic path which soon followed a fence to guide me along. The fence now marks the edge of the National Trust Ben Lawers reserve; the path and I kept to the southern side.

There were some muddy stretches, helped occasionally by a few stones set down. I took advantage of the tiny burns flowing from Meall Greigh to top up my canteen, since I was drinking a good amount. Even with the breeze and passing cloud for shade, I was walking at a pace to be comfortable in shorts and short-sleeved top. The climb to Meall Garbh's ridge wasn't steep, but good work for the legs, especially after the exercise mind had during the last handful of days.

I paused at one top at the start of the final ridge, taking in the views down towards Glen Lyon, across to the Inverar horseshoe and Schiehallion. Now I could see where I'd been walking yesterday, as well as old friends such as Meall a'Choire Leith and Meall Corranaich. Meall Garbh has a rugged ridge, not steep-backed but, with its flanks, enough to justify its name. I was reminded of another Meall Garbh, that along the Tarmachan ridge just a few miles away. There was also the sight of An Stuc looming ahead (though not looming up, since it and MG share the height of 1118 metres). Having read up on this brute, I knew that the eroded path route went to my left, though also that people had suggested heading to the right as an alternative. I'd decided to make my mind up on the ground, so the time for that was almost here. First to top up with flapjack, water and views, then a steep, but not problematic, descent to the bealach. The west side of MG is one of the rugged sides, so I needed to concentrate on that rather than looking ahead and risking toppling down the easy part.

From the bealach, I could see that the path to An Stuc started gently. What had seemed to be a Darth Vader of hills was transforming into a cheery grandad inviting you to sit on his knee. That path did offer a better view of the steep section further up, but - the day was dry, my legs weren't complaining, so I decided to go with it.

The scramble isn't long, though I couldn't give a distance, and there are plenty of large, solid rocks to hold and step on, so in those conditions I found it some effort, but fun rather than frightening. And, yes, I did glance back and down, though didn't get the camera out! Rain, wind, or descending could have made it a different experience, but pretty soon the slope eased off and I was onto the rounded head of An Stuc. 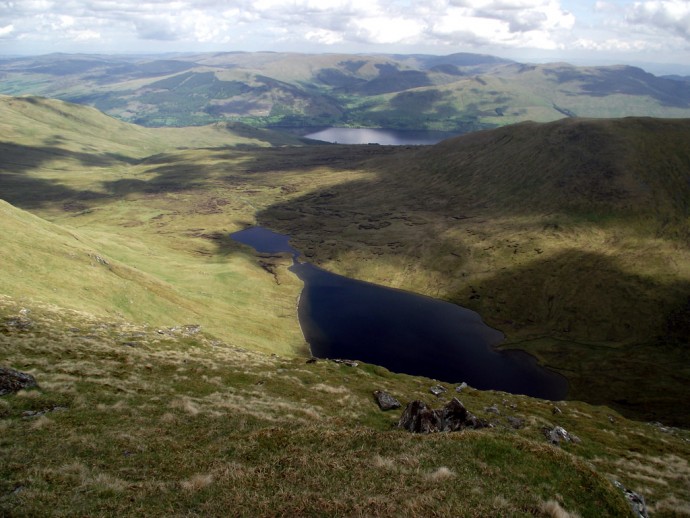 This provided me with further views, including Lochan nan Cat (which I'd only glimpsed, through cloud, when up Ben Lawers a year before). It looked as though the loch would only show completely from Creag an Fhithich ahead, but that seemed a little far with the state of my feet and legs. So I made do with this last top before the descent and walk out. The southwest side of An Stuc is easy by comparison, though needs a hand now and then to steady you as the path winds down, much like the descent from Meall Garbh before. There's a lower bealach and a gulley leading southwards, where I found a slab of snow surviving next to a tiny burn. A path winds round this shoulder, though either peters out or I lost it on the subsequent slopes. These are pretty steep, which was fine in the dry but again could be more challenging in the rain and wind. I tried to avoid anything like real crags, but it was slow careful going all the same. From there, I went my way, crossing a few feeder streams and skirting the south short of the Lochan. There were hints of a path at times, but mainly slightly squishy ground. I refound a path, or one started, after the smaller lochan (the cat's head), descending gradually towards a small dam nearly a mile further on. From here, there was a track, at least until I left that in favour of the path accompanying the Lawers burn.

After the high of the tops, I really felt this descent, not to mention how long the miles seemed to be. The path runs (not that I did) along the side of a steep little valley holding the burn, then zig-zags a section to reach a footbridge. Though that takes such a step to get up that it must add a whole metre to the ascent of the walk! After coping with this (and the equal scramble down from the bridge to the path beyond), I came to where I'd left the path before.

Then it was past the traces of the sheilings, over the stiles (another metre or two each, I'm sure) and down through the woods. Loch Tay beckoned invitingly, as did the thought of the Lawers Hotel's menu. I finally returned to my starting point, a few minutes short of six hours after leaving. The meal and drink that followed were, like the walk, to savour, though they did take less effort.