It had been a miserable rainy week with the Wednesday forecast to be the only dry day! So Wednesday it was! It turned out we were lucky and the weather was smashing! I even went home with a little sun burn (and my head down as my mother in law had been trying to slap sun cream on me before I left to which I refused) it kills me to say she was right

My buddy James and I arrived at the Inveruglas car park and geared up at 0840, we were sad to see that the visitor centre was closed but the toll-free parking was a wee bonus! We didn't hang around long because the midges were out on force, set off at 0850. 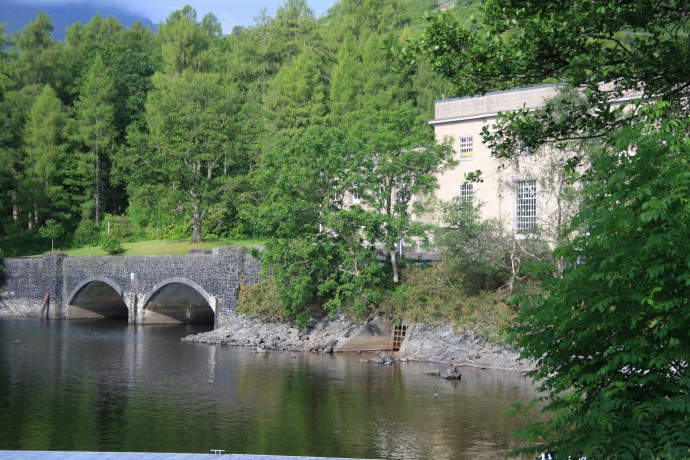 We headed up the dam access road with Ben Vane to be our first munro of the day, followed the path for a while where we met some sheep and admired this Iconic flower; 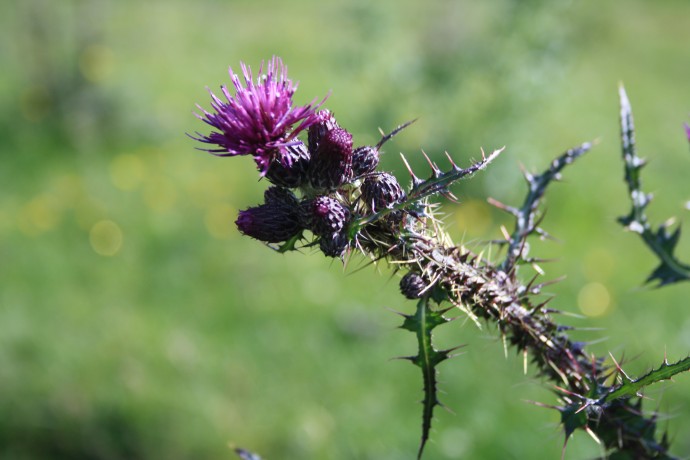 The stunning hillsides of A' Chrois and Ben Vorlich towered above us but the power lines and pylons that littered them, for me seemed to kill the natural beauty of the area, It wasn't till the path swung round a little that we got our first views of the featureless slopes of Ben Vane. 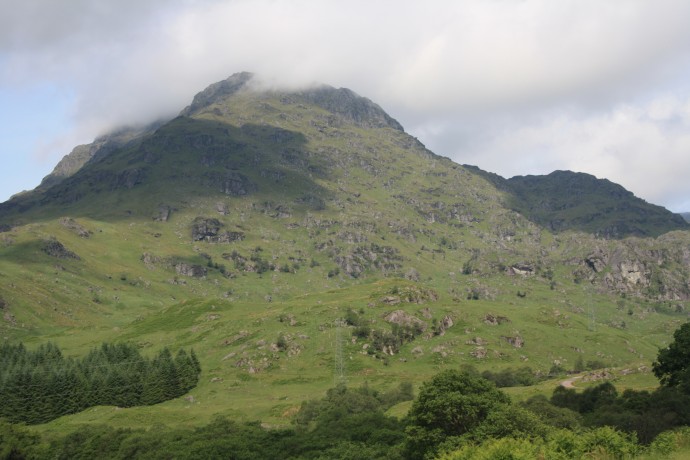 The path was initially very boggy and we seemed to get covered in mud before our journey had even began! 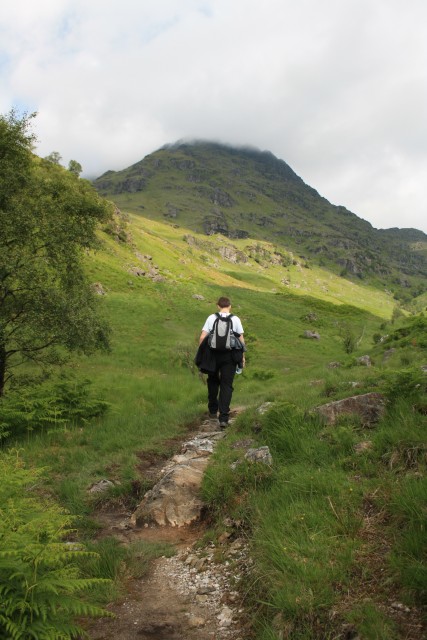 Initial path at the foot of Ben Vane

With the mountain being so steep we gained height very quickly where we got some fantastic views down to Loch Lomond with Ben Lomond and Ben Narnain in sight! I was a little apprehensive about our ascent on Ben Vane because I had read several posts reporting that it was a tough hill because of its incline but I was unimpressed and found it to be a doddle!

Some photos from our way up Ben Vane; 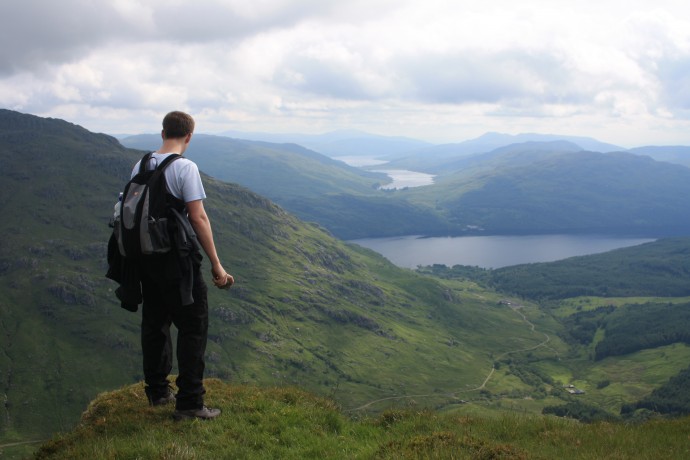 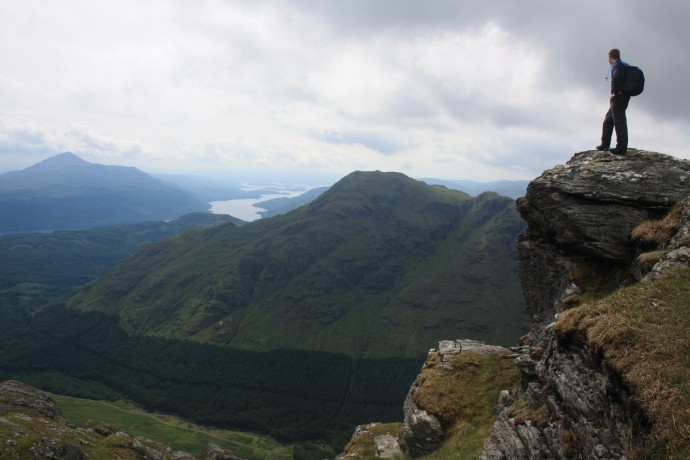 It wasn't untill after we had conquered several false peaks and were nearing the summit that we got our first sights of the dam. We reached the summit at around 1040 where we found a spot out of the wind to have lunch and brewed up a wee Bovril which went down nicely! From here we planned our descent down to the dam and our route up Ben Vorlich, some parts looked very steep but we thought we could shave some time off our journey if we headed straight down towards the dam and it looked manageable, so that's what we done!
At the summit we realised we could see all five munros we had completed together which was nice. (Standing on Ben Vane) we could see over to Ben Lomond, Ben Narnain and Ben Ime which we had done just a few weeks before and Ben Vorlich was behind us. Views from The summit were great but the panorama was obscured by higher peaks in every direction. 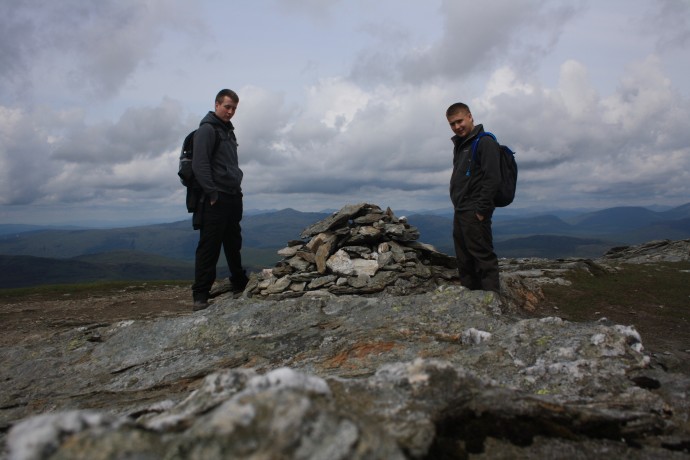 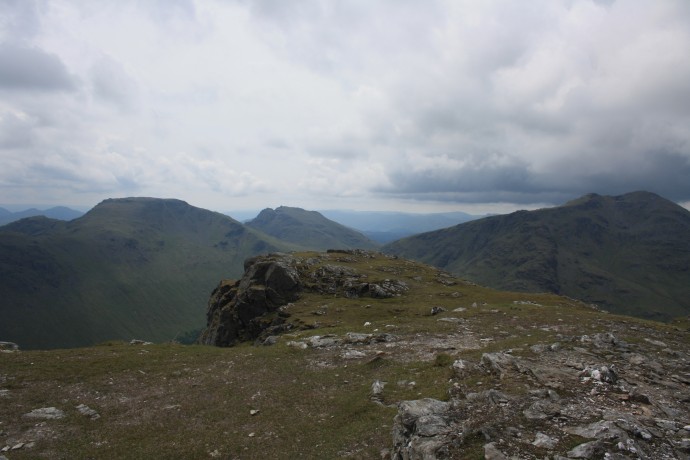 (Left to Right) Ben Narnain, The Cobbler and Ben Ime from the summit of Ben Vane 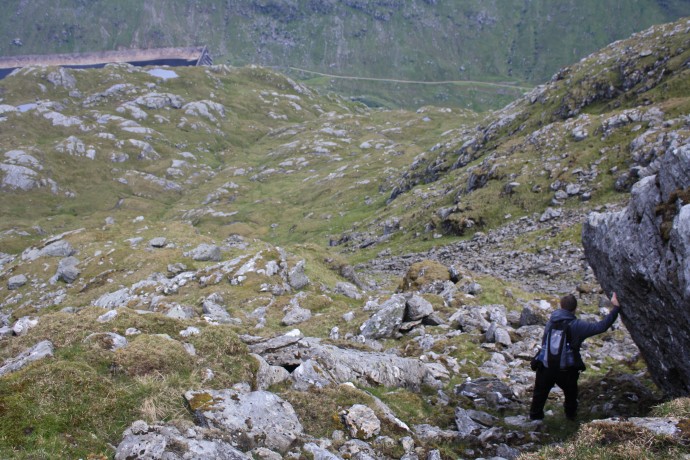 Taking the "Cross Country" route down to Sloy Dam 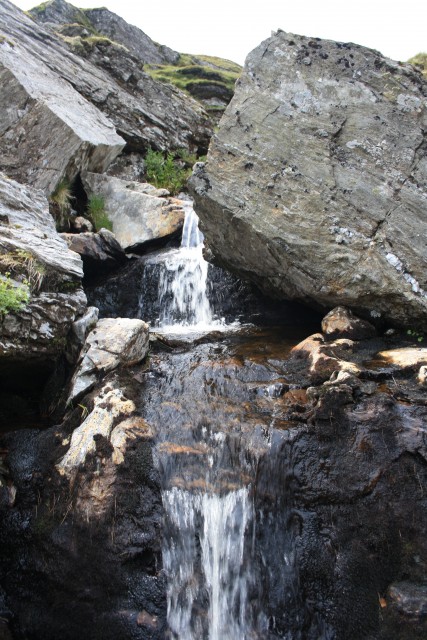 Our descent down to the dam took longer than we expected and it was nice to stand on solid ground when we got there. The dam was impressive and we were pleased that there were no gates so we could walk over it. 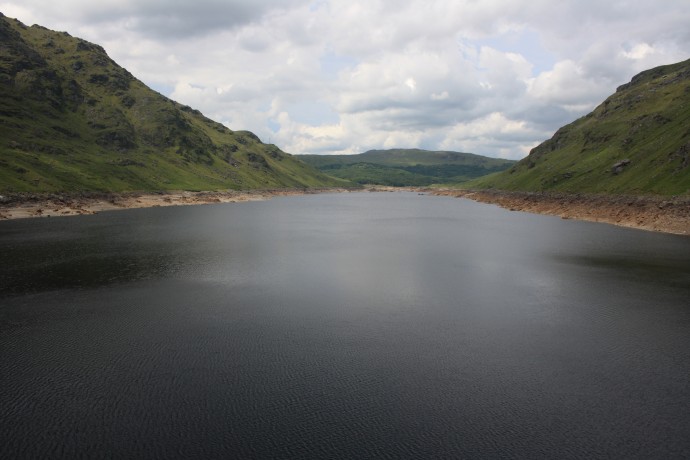 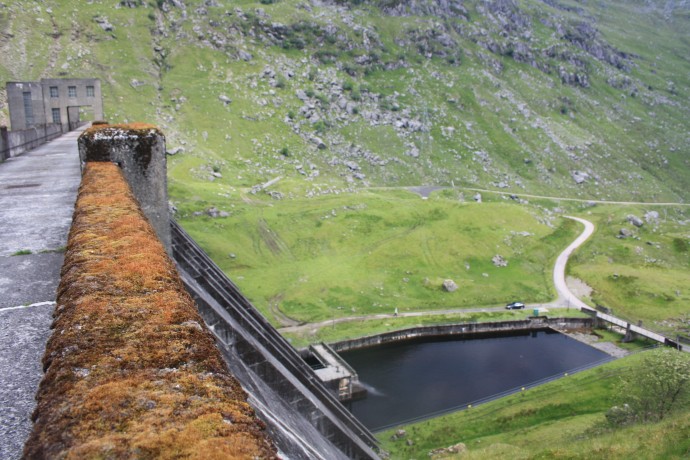 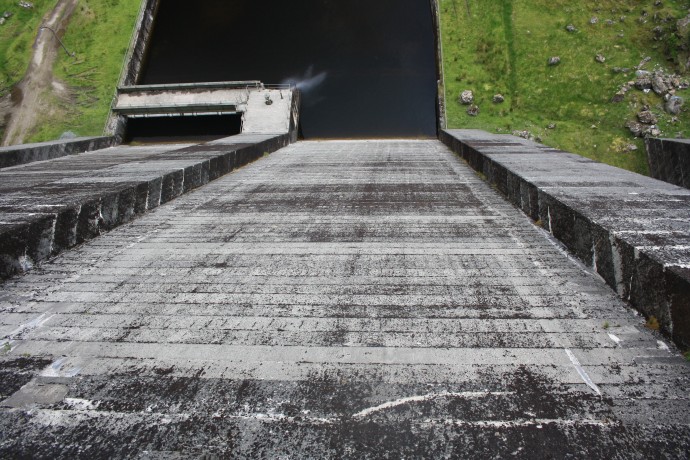 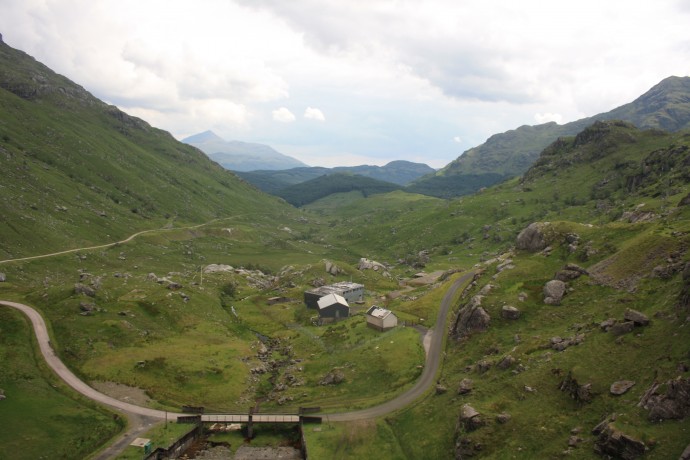 Looking down the Valley from Sloy Dam

After crossing the dam we had our doubts about our planned route up Ben Vorlich and were considering following the road down to the path but we decided to man-up and go with our original plan which was taking the "Insanity" route straight up the north-west side of the mountain, it was super steep and we had to stop for several breaks on the way but the sense of accomplishment we felt when we re-joined the path at the top was great! It was here that we both realised that we were out of water! I thought I was well prepared as well taking 3 litres in my platypus but I guess I drank allot more with it being a hot day! We followed the path to the summit where we took some pics, grabbed a quick sandwich and began our decent along the "tourist" route 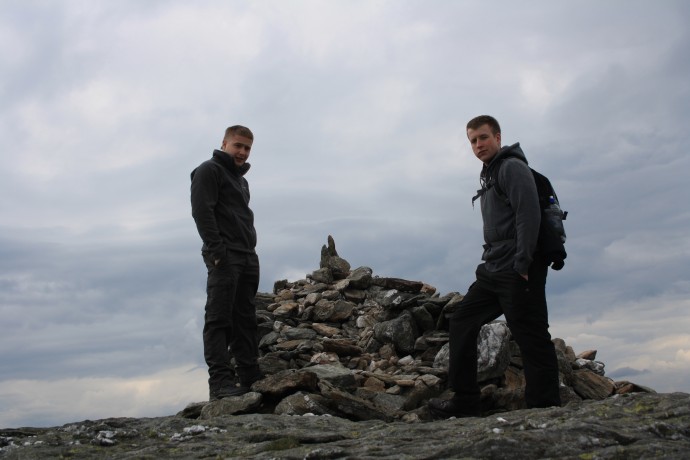 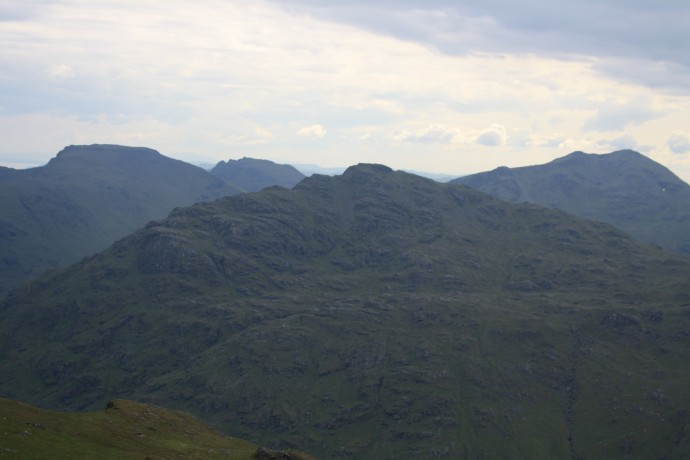 Looking back at Ben Vane from Ben Vorlich, Ben Narnain, Ben Ime and The Cobbler in the background 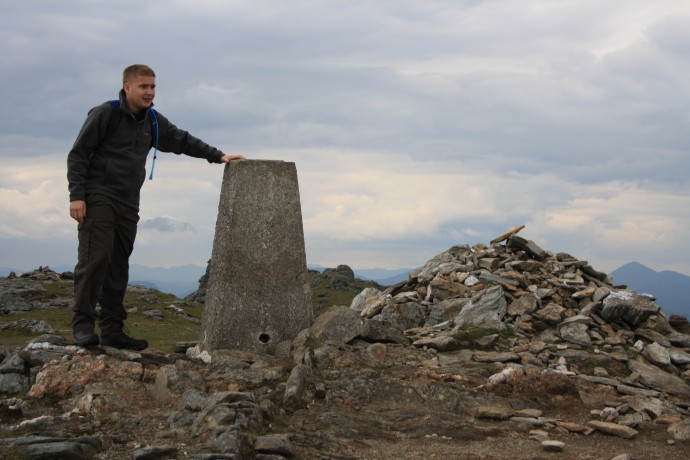 Trig point near the summit of Ben Vorlich 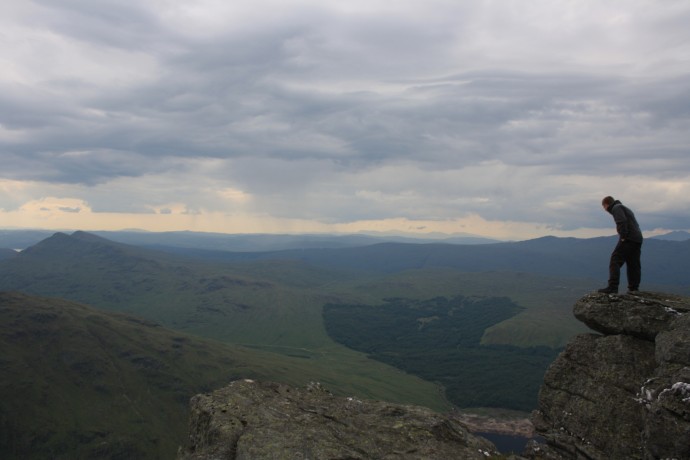 From the summit of Ben Vorlich 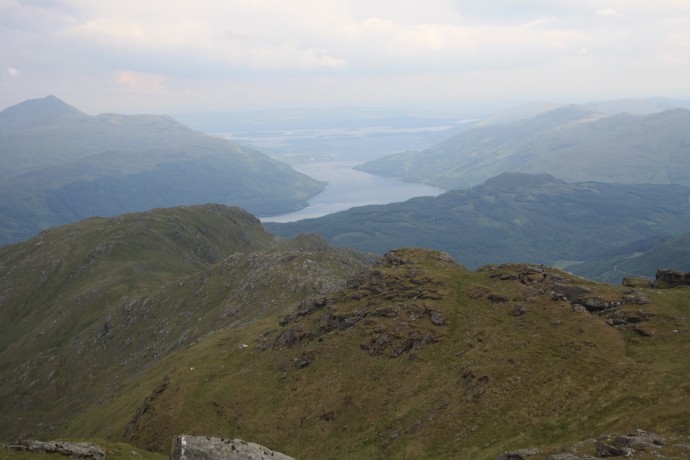 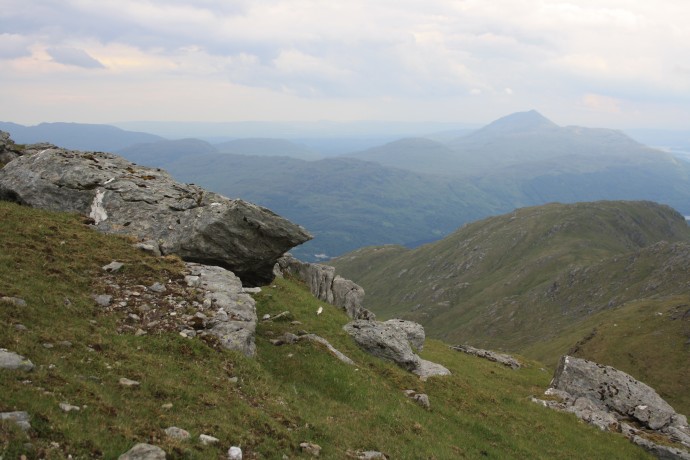 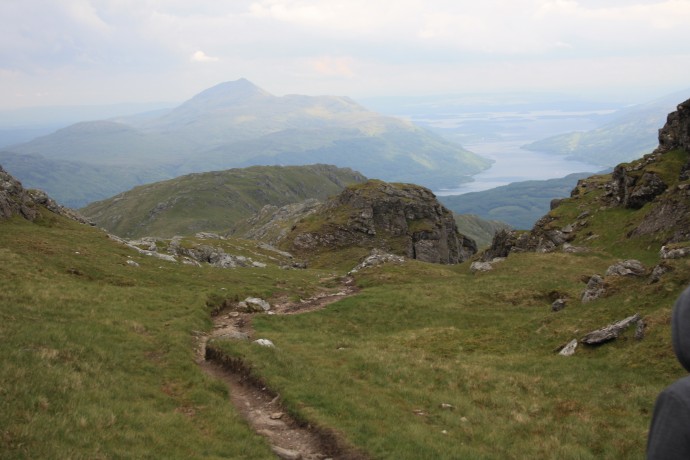 It was a hard slog back to the car at Inveruglas and we were both shattered! Our plan to stop and buy a glass bottle of Irn-Bru from a garage kept us going though! After nine hours and twenty minutes we were back at the car. All that was left to do now was drive home and face the dreaded "I told you so" from my mother in law

Such a fantastic day we had! Thoroughly enjoyed it! I was glad we done both these hills on the same day as well as now we had completed the Arrochar Alps and could move onto more northerly munros, Beinn Chabhair next!

Here's the route we took.

Great stuff guys, thats the way to get up the mountains

Brilliant route that was something I would have done

Great pictures as well!! Regarding suncream-I usually keep a wee bottle in my backpack throughout the summer...you could ask your mother in law to organize one for you

RTC wrote:Oh to be young again!

Mountainlove wrote:Brilliant route that was something I would have done

Great pictures as well!! Regarding suncream-I usually keep a wee bottle in my backpack throughout the summer...you could ask your mother in law to organize one for you

Thanks for the tip! I'll get my m.i.l to sort it out for me!

Thanks for all the lovely comments

Nice report, yeah I wish I was young again too

I like the way you have a person in most of your photgraphs, it really gives a sense of scale to the shot. Keep it up!

Recently decided to try start my career in Munro bagging

Was thinking start small and go big, but this route seems like i good hard way to start. Plus bagging 2 Munro's 1st time out

great report ,as i had already done ben vane 2 years go i went for the insane route today from the dam to ben vorlich and tbh i was surprised at how good it was ,steep but dry and good footing

Did this on Monday after reading your report. My first solo hike on new hills so with new GPS in hand and route downloaded and plan finalised I am on my way. Yes a hard slog along the 'insanity route' but a great days hiking in very good walking conditions. An excellent description in your walk report.