Munros included on this walk: Càrn Liath (Beinn a' Ghlò)


We'd had to cancel the Buachaille trip yet again the day before this and today was pretty much a last minute decision, but after climbing Beinn Dearg recently and spotting this scarred hill near Blair Atholl, it seemed like an easy climb for a Sunday afternoon even if it meant having to come back another day to finish the Beinn a Ghlo trio. The day started off quite sunny and moderately warm as we started from the car park but as we approached the turning off the ATV track to the hill the sun disappeared behind cloud and didn't really reappear till later. Clearly we were not righteous enough. The sun shines never on us After the boggy bit

Our first mistake was to ignore the more obvious path after the hut and instead headed straight through a particularly boggy bit of ground. No harm done though and before long we put some distance between ourselves and the hut.

As we climbed up the steep path the views we got were incredible mainly of interesting weather conditions nearby and far away, sunshine shining everywhere else but beside us. Rain in the glens I think on a clearer day the views could have been even more amazing. We kept checking to make sure that the summit was cloud free and all the way up the hill it remained that way despite fragments trailing lazily across the flattish-wide summit. The white scar of a path is tricky: of that there is no doubt. It's steep and loose in places and sometimes even the black earthy peatiness conceals a layer of tiny scree like stones that can take you by surprise though more often than not this is a problem on the way back down.

It is a pleasantly short hill, Carn Liath and before you can say "Sir Hector" you are confronted with the first very large cairn. From there it is a vary short walk to the true summit, cairn and trig point. By the time we got there, about 4pm, we had the place entirely to ourselves but it was cold and windy and the two nearby higher summits were shielded by a layer of cloud. We sheltered by the big cairn and had lunch including a wee dram of Laphraoig which tastes incredible at the top of a munro. The strong carbolic taste/ smell disappears and you're left with a smoky warm dram. Anyway enough of that. We could see the cloud encircling the mountain but not the summit. It was an unusual and interesting experience. However the weather did eventually close in a bit more and we headed quickly downhill. At which point the mountain got its own back on that white scar path. We decided to take a short cut straight down at one point missing out the zigzags and we'd probably have been quicker just doing a bumslide than trying to stay upright and professional! 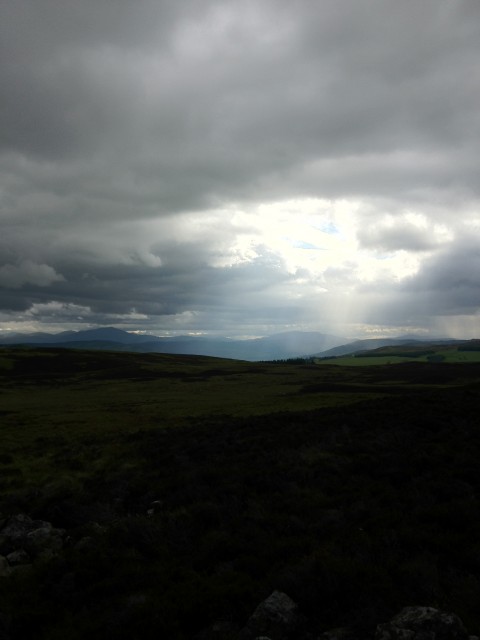 And by the time we got back to the ATV track, the sun came out over the mountain The sun came out after we were down

and we had a pleasant 20 minute walk back to the car. Then heading off to the Blair Atholl Hotel for a bite of dinner.

Fab day out but I now need to go back and do the trio....