The early forecasts for saturday were poor. MWIS was giving odds of 10% chance of cloud free summits and heavy rain expected. With this in mind it was either stop indoors and be given household "jobs" to do or grab the waterproofs and get out in the wind and wet. No contest, though I decided to keep the walk short and avoid anything tricky and take the dog. I'd had a 2 week break after completing only 2 of the 3 munros at Loch Laggan due to tendonitis at the back of my knee which had been excruciating when descending off the hills. A single hill was needed to test how my tendons would hold up. Map consulted, I decided on Meall Buidhe with a very short ascent. I'd been up neighbouring Ben Lawers a couple of months ago and had spectacular weather and views so was prepared to sacrifice the sights this time if I did hit the expected cloud.
The drive up was fine and the magnificent Falls of Dochart were roaring through Killin with all the recent heavy rain. Passing the Lawers car park i'd never seen it so quiet, must have been about 12 cars in total - I guess most sensible folk had decided to stay in the warm and dry

Pulled up at the car park by the dam just one other car there - didn't see anybody else on the walk so guess they must have been up Stuchd an Lochain. The weather was ok at this point - the wind was up but no rain yet. Stuchd an Lochain from the car park

I headed up through the gate and onto the nice path until a small cairn is reached and it's time to leave the path behind and head up the slopes. The grass track here is wet but nothing too boggy. It was at this point as I looked back towards the dam and car park that the weather front rolled in and it began to rain quite heavily. Waterproofs on and it was then time to negotiate the awaiting peat hags. Gate at start of the walk Harvey seemed to be able to pick a nice line without sinking so for the most part I followed where he had stepped. Once we'd got through these with just the odd wet foot the path veers left on the final pull to the summit. It was here that the cloud base was waiting and with a final look back at the disappearing view we stepped in to the cloud in search of the summit. I can't begin to describe how thankful I was to have my GPS with the WH waymarkers downloaded onto it. The clag was so thick that manual navigation was a nightmare. The ding-ding sounding from the GPS as the waymarkers are hit was so reassuring, it would have been so easy to wander off in the wrong direction. In the clag I hit several cairns thinking it was the top but a glance at the GPS told me it was a while to go yet. I don't mind admitting that it was a little nerveracking in places. All my walks this year have been luckily in great visibility, today was the first real pea souper I've had to contend with. I swear the dog kept giving me a look to ask "I hope you know what your bloody doing"

Finally the GPS indicated the summit cairn was just up ahead and then it appeared out of the mist. I didn't hang about, a quick summit pic and an about turn, fairly anxious to find my way back out of the clag. 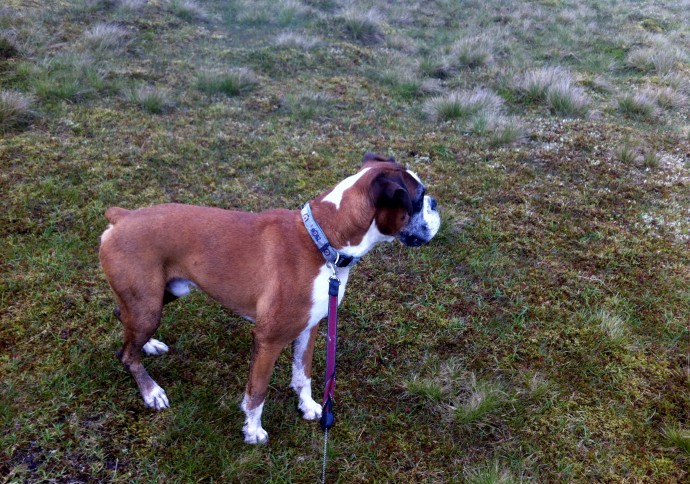 Are we really going in there? 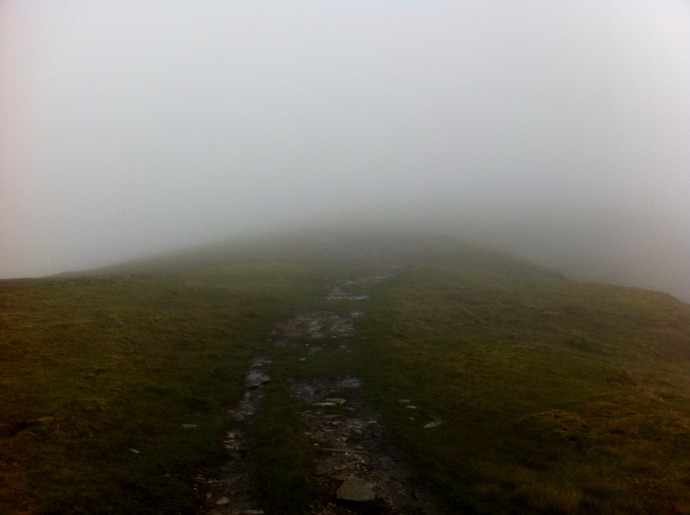 Finding my way back was aided by the reassuring ding from the GPS as the rain and wind lashed down. It is hard to describe the noise at the top, the pounding of the rain combined with the ferocious gale and absolutely nothing to see... Viz of about 2 metres?

Then I hit the cloud base, the noise suddenly stopped and I could at last see where I was going as the view opened up. Phew, the journey through the clag was over and I began the gentle descent back towards the car. The amount of rain that had fallen meant the hags were swimming and I slipped a couple of times and Harvey's white patches of fur were a replaced with a boggy black. Emerging from the clag, just able to make out the Lochan 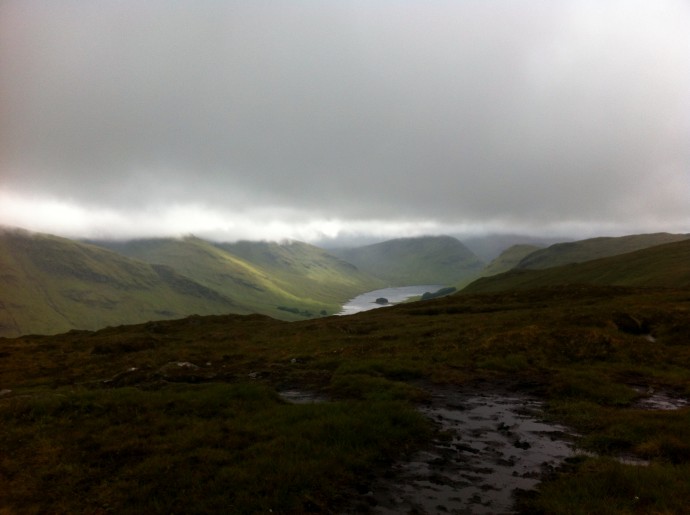 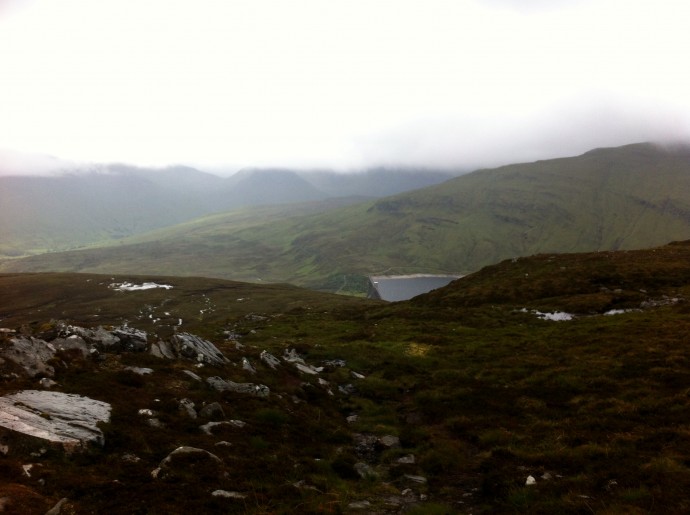 Finally reaching the car was great. We were soaked but happy. In terms of gradient it was by far the easiest hill i've climbed, but I still felt a great sense of achievement of getting to the top in those conditions. Even in that kind of weather, better outdoors than in agree, it's always good to get out for a blast, even if the weather is poor

Pity about the weather, it's a nice horseshoe taking in the other Munro and the Corbett around the Loch but weather not in your favour for that. Good on you for getting out though

Well done on getting out and up another Munro

Weather conditions sounded really bad, take care out there will you