Firstly folk, the distances (travel and ascent) are just a copy from Stretch, my legs and feet suggest it is more but it may just be walking on shattered rock that has gubbed me.

So I looked up routes and I found very little for what I wanted. Only Stretch had blazed the trail that I fancied (http://www.walkhighlands.co.uk/Forum/viewtopic.php?f=9&t=4826). So the plan was in place, now all I needed was the energy/desire, which is difficult at the moment as I seem to have misplaced my mojo!

So my alarm went off at 0515, my bag was packed from the night before and I get up, turn off the alarm, eat some breakfast and went back to bed. I'm not in the mood! Another time. An hour passes and I get up, cursing, I feel guilty. The kit is thrown into the car and I set off, already an hour down. Magic.

So I get to the start point (very bumpy landrover track) but stop short (about 200m) at a signpost where I can park my car. I'd suggest to anyone planning to similar walks to do the same as you cannot park cars at the WH start point. 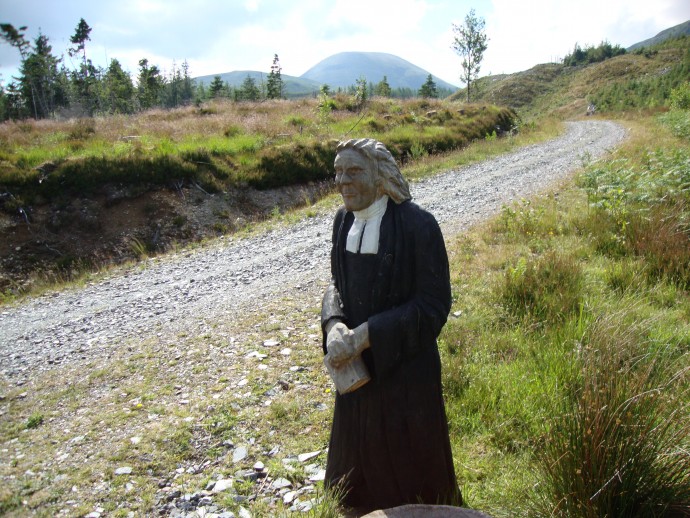 The route takes you past the start of the grey corries ridge which looks really impressive (I should add, I didn't do that top, one to return to) 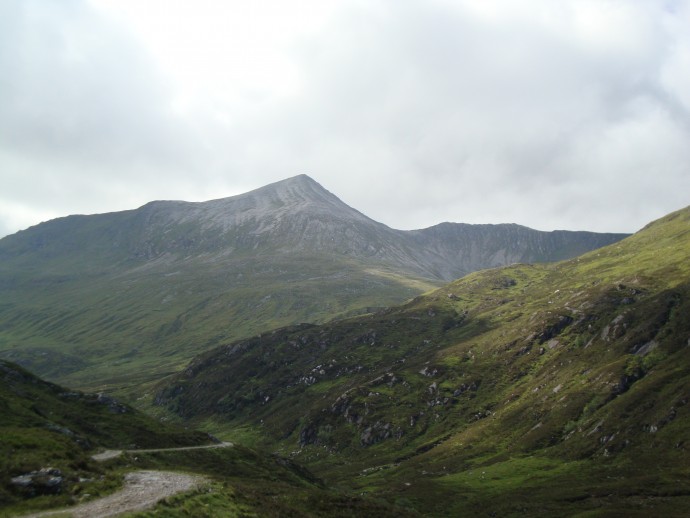 After a while longer Stob Ban comes into sight 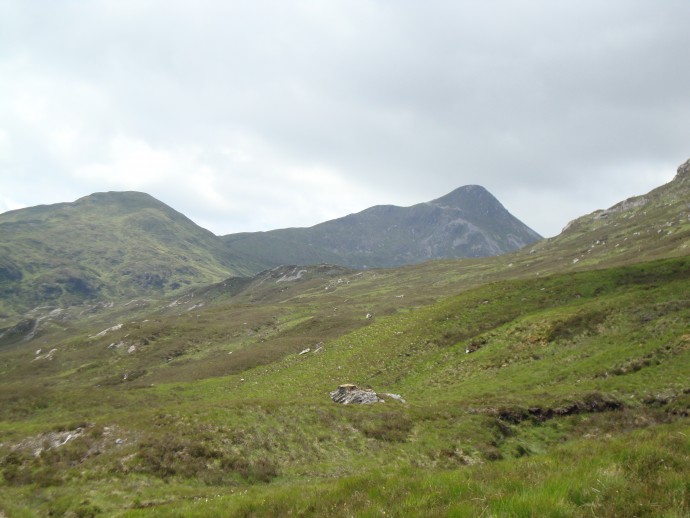 1130 sees me at the bothy, I cross the river and head up the slope to Stob Ban's lower top. 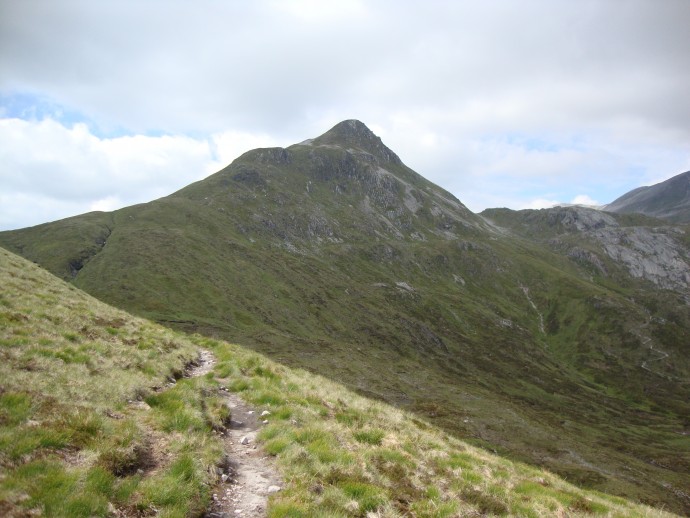 There is another route up the valley below that takes you next to some crags that looks interesting.
1230 sees me at the top of Stob Ban, it's hazy and there is a cold wind but the hills are empty. A day of solitude ahead. 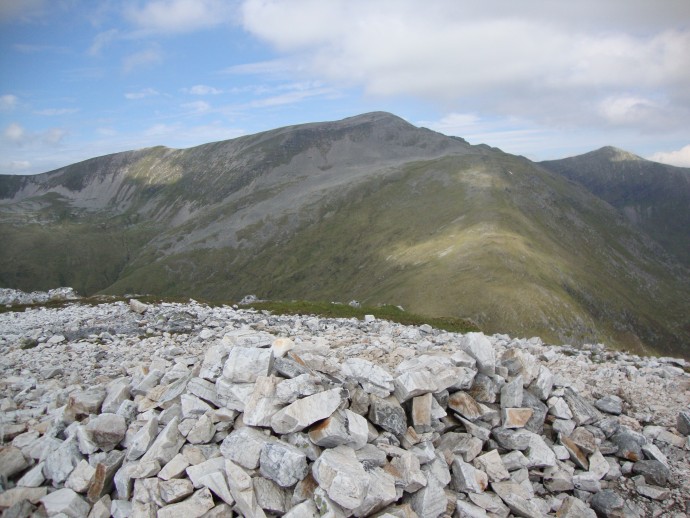 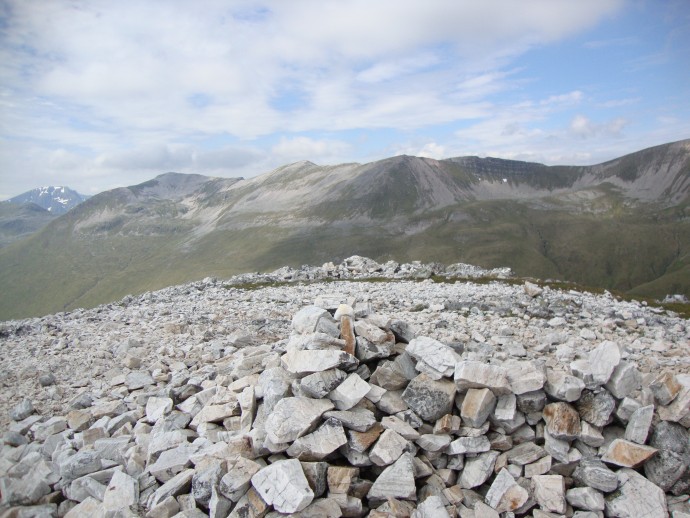 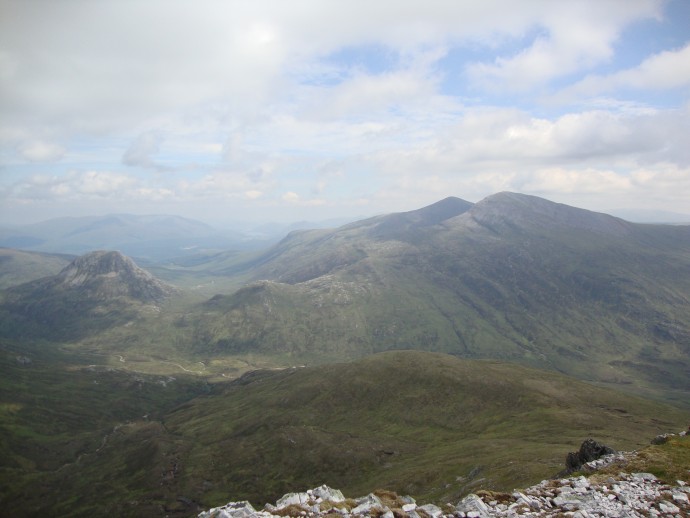 I have some food and try to stretch my hamstrings which were really tight from gardening the day before, honestly, who'd have thought it'd taken so much out of me!

1400hrs sees me at the top of Stob Choire Claurigh, I can't be bothered going to collect the other tops to the east. 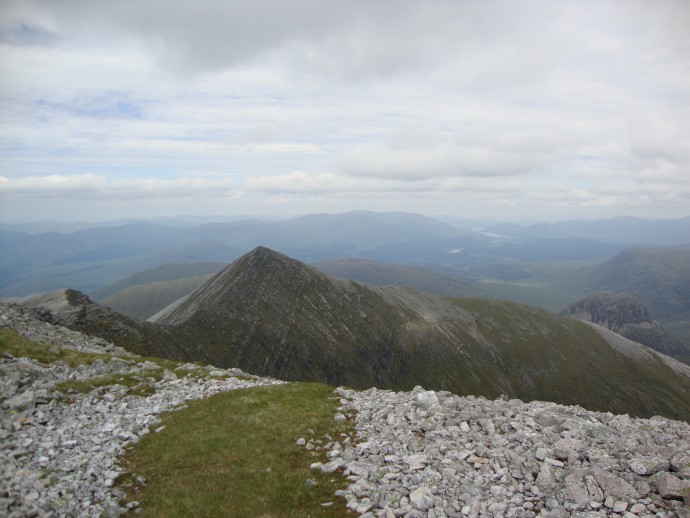 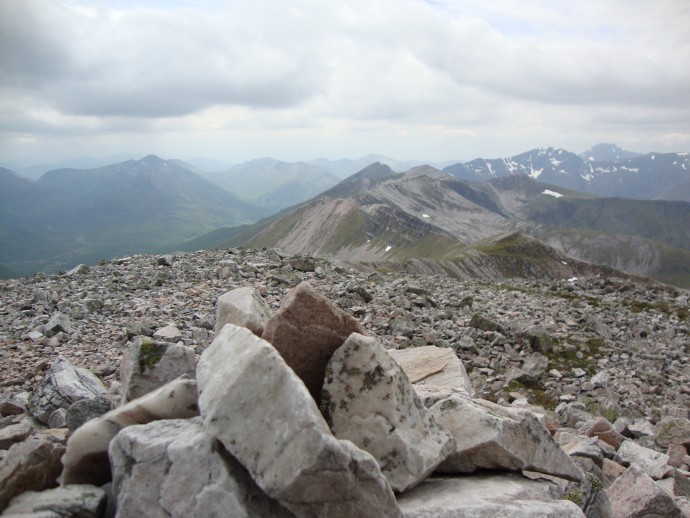 I set off across the ridge, I only now see how small Stob Ban is compared to the others. 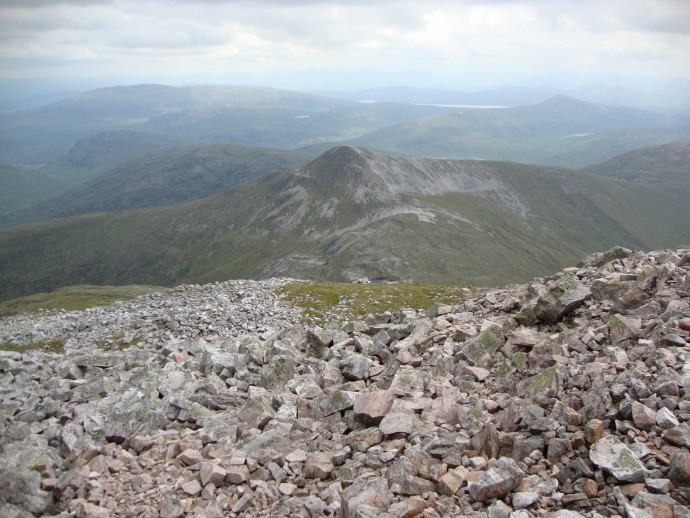 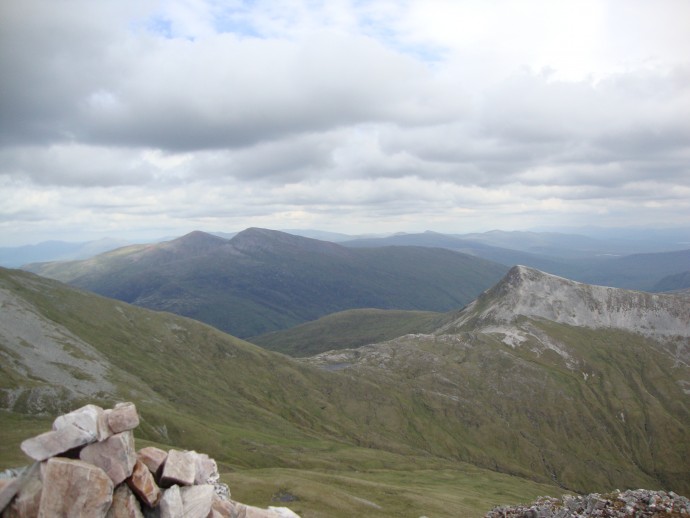 The route along the ridge is without difficulties, there is no scrambling and no real exposure. If you want to go and look at some big drops then you can, there are some falls that rank highly in the "that'd kill you" scale.

All too soon I'm approaching Stob Coire an Laoigh 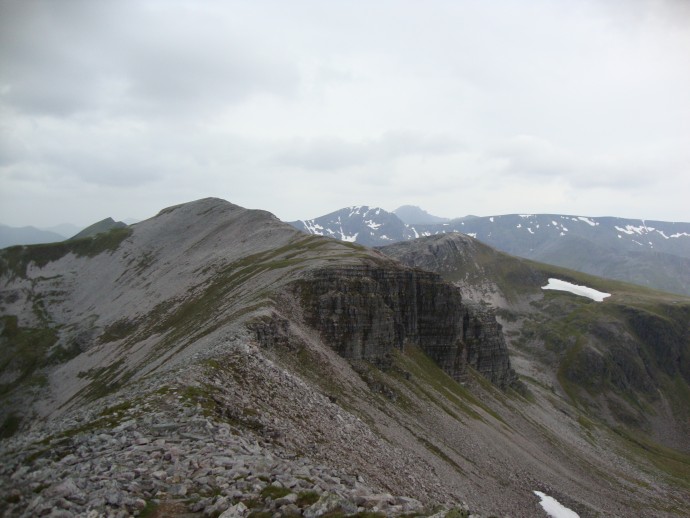 At 1530hrs I get to Stob Coire Essain and the weather has changed, it is lashing down, sideways in a strengthening wind. Do the last one or bail? 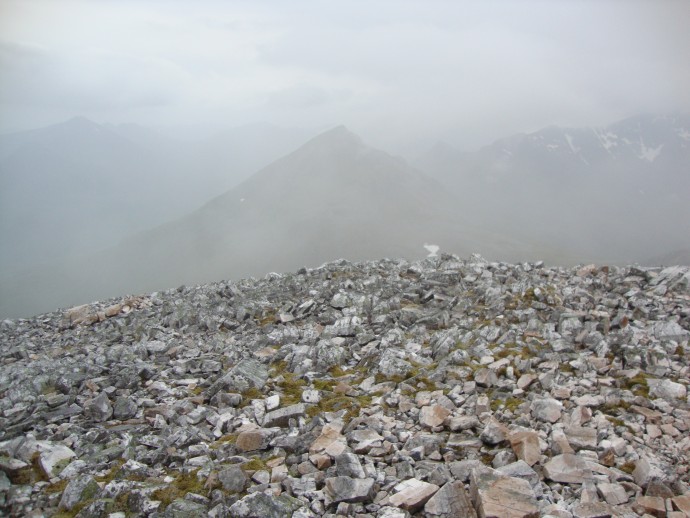 A grand Scottish day! Sgurr Choinnich Mor through the clag 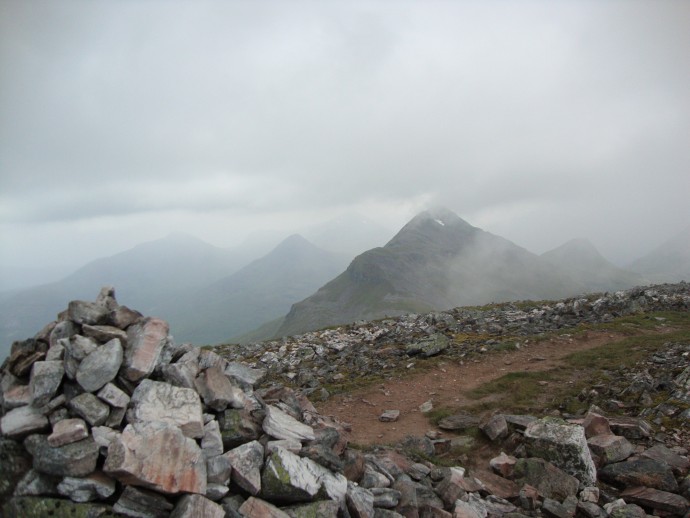 Yeah, you guessed....soaked I decide to call it quits!

I then folllowed Stretch's route on an obvious ridgeline (wih some spectacular drops around me) which was just as well as the cloud base followed me down (about 100m above me) pretty much all the way down!

One change that I would make to this route (if Paul/Helen wish to add it to the route) is that as you head down the grassy bank (it was heaven yesterday, soft grass made spongier by the rain....my feet thank you!) you come to a bit of woodland that has been cleared with a knoll in the middle of it. Aim for the knoll, skirt it to the left and go onto the forestry path. Follow the path (avoiding Spean bridge route) and it'll take you out where I parked my car (this runs parallel to the North to the WH track but goes along a decent track rather than the what I endured). I pushed up throught the trees (thick forrestation) to find the WH track, this was hard and a MISTAKE! The WH track is now a bog...I think the forrest track would have been a nicer and faster way to finish the day!

This is a good route, minus the bog at the end!

Try it! Maybe add the 4th hill too!

Good one Meatball! I didn't care much for that path out of the forest that heads back to the car one bit - the rest of this route was great though. It's been a long time since I wrote my report, but I probably just figured out the distance and ascent using the map maker on the site - so it is at best an estimate. Wish I could have got that last munro, but like you I called it a day - only after making part of the descent across to it and then realising that I was done.

I'm a bit annoyed that I popped up through the trees to the wh route, the forest path was far easier and would have saved me around 30 min, doh.
Sgurr Choinnich Mor was just going to be a bonus, my legs were able just a lack of drive on the day with an impending soaking looming.
I'm glad you gave me something to follow.

Well done on getting out Meatball. The weather wasn't too bad for the first half anyway. Nice photos.

Good report mate. Don't worry though, you can complete the full walk when you return with me one day

Since November 2010 the WH route description has recommended the forest track over the former tramway you took, and warned about the muddiness/overgrown state of the latter:

Grey Corries (WH route description) wrote:Most guidebooks recommend turning right here along the line of the railway back to the start - the walking is easy in some parts, but in others is tough and tiring as much of the route has become boggy and overgrown. There are also various former bridges missing, necessitating steep descents and re-ascents to cross the gaps, which can be very trying at such a late stage in the day. A slightly longer but much easier alternative is to instead continue along the main track, bending slightly left and then right, and then turning right at at a junction. This eventually leads back to the access track from Coirecoille; turn right to return to the parking area.

Paul,
Doh....just checking your were on the ball, you were...you passed the test.
Nothing to see here...
Lol
Dunno where I stole that track from!

Sounds like an interesting day. Some great shots. Hoping to do these late July (also hoping to follow the best path so this is very useful

Paul would never intentionally lead anyone astray . . . or deceive them with fiery pieces of chocolate at a bonfire.

Hey Stretch, You have just brought me out in a cold sweat

No, no - don't worry - you did get the track from here! The track still had the option which was warned against in the text. All the same now

Misleading? That chocolate was mild to moderate

Del246 wrote:Good report mate. Don't worry though, you can complete the full walk when you return with me one day

Are you adding that to the list that you owe me?
Or are you paying me for that one? Lol

Del246 wrote:Good report mate. Don't worry though, you can complete the full walk when you return with me one day

Are you adding that to the list that you owe me?
Or are you paying me for that one? Lol

I have not done these either Del, so he can pay us both

4 on a nice summers day...
Less if you are going in winter!
Bonus, found 3 munros that I'd missed while totting up!

I love that you always give an incredibly honest account of your day, good and bad