Donalds included on this walk: Queensberry


This should have been a very straightforward wee walk, but it turned into something more of an adventure than I’d anticipated, due to a combination of zero visibility and some very mysterious happenings involving my pocket compass and my Blackberry phone

... little did I suspect that I’d be entering the Twilight Zone

!
I had a work-related meeting in Dumfries at lunchtime, and decided on something of a whim to take a half-day’s Annual Leave and bag a Graham on the way back up the road. After a quick look at the map, Queensberry seemed the best candidate – a fairly isolated Graham of 697 metres, well east of Thornhill on a minor road loop off the A701.
Scotland has of course been giving us our usual “lovely” summer weather this June

, and Wednesday 27th was no exception – dreich in the extreme, although it had at least just stopped raining when I arrived at the end of the track to Mitchellslacks Farm, which is the usual starting point. The cloud base looked to be right down at around 200 metres: Undeterred, I parked just a wee bit north up the road so as not to block the farm entrance, and walked back down towards the farm. A handy footpath signed “to Beattock via Long Cairn” cuts the corner down to the farm track. Mitchellslacks Farm itself is rather bonny, and indeed the general surroundings are very scenic in a green & rolling kind of way: This whole area is known as the Forest of Ae, after the pretty wee village of Ae, which rejoices in the UK’s shortest place name. For people who need to know these things, the UK’s longest place name is of course the Welsh town of Llanfairpwllgwyngyllgogerychwyrndrobwllllantysiliogogogoch, generally abbreviated to “Llanfair PG” for obvious reasons. But I digress.
As instructed in Nick Williams’ handy “Southern Uplands” volume in the “Pocket Mountains” book series, I walked up past the farm close on the left, and through a gate on a well-maintained landrover track heading up north towards the Capel Burn: Unfortunately I got a tad confused just beyond this point, where the track forks. Slightly misled by Nick Williams’ instruction to “[keep] alongside the wall to another gate” (I was one gate further along than I thought I was), I took the left fork here: the route follows the right fork. Ah well, at least the left fork led to a rather scenic water meadow by the sides of the Capel Burn: At this point, I realised that I’d taken the wrong turning at the fork, and I cut back up the hillside on the right on a grassy path to get back onto the correct track, just before it forked again: From the OS Landranger map and from Nick Williams’ route description, I worked out that the right fork was the one I was after here. If all was going to plan, I should come across a “circular sheep bucht” fairly soon.
Circular Sheep Bucht Ahoy! This is truly a Taj Mahal amongst sheep buchts: a huge and complex multi-level bit of drystane dyking

. After stopping to admire it for a bit, I got the map and compass out again. And this was when things started to get a bit strange... According to the map and my own limited sense of direction, I should now be facing east, with the Capel Burn to my southwest. However, my compass was telling me something quite different. Exactly 180 Degrees different, to be precise. Oh no; not again...

On a previous ill-starred outing last spring to the Merrick and Shalloch on Minnoch from Loch Trool (I was over-ambitious and nearly got benighted; my wife was having kittens...

), I’d had the bizarre experience of my compass mysteriously switching polarity by 180 Degrees on the shores of Loch Enoch, an eerily beautiful place at the best of times. The only reference I was aware of regarding a compass switching polarity was Melville’s novel “Moby Dick”, where the ship compass starts pointing south rather than north after being struck by lightning. In the book, this is a Very Bad Omen

, so I got thoroughly spooked, and was half-expecting the Great White Whale to surface from Loch Enoch any minute

... When I got back home, however, I figured out what had caused it. My Blackberry mobile phone, which I was carrying in the same pocket as my compass, has a very powerful wee magnet in its plastic case. (I’m not sure why: my niece assures me it helps the phone battery to hold its charge but I don’t understand how that would work.) Anyway, it is stronger than you might think, being quite capable of picking up loose copper change from my pocket et cetera. And also quite capable of switching the polarity on a pocket compass

... Has anyone else had this experience at all? It’s a genuine Health and Safety issue when taking a Blackberry phone on a hillwalk, I feel.
And yes, I’d carelessly carried my phone and my (new) compass in the same pocket again this time. D’Oh

!
I was sure enough that this was indeed what had happened, to press on into the Murk, having re-aligned the compass so that the south pole was pointing north and vice versa, if you get my drift: in other words, with the whole thing rotated by 180 Degrees. I crossed the burn just to the east of the mighty Sheep Bucht, just where a barbed wire fence crosses it (the easiest point to cross both burn and fence) and headed up on what I very much hoped was a northeasterly bearing Queensberry is one of these hills that have a smaller nearby hill named as a “Mini-Me”: something I always find quite cute. The best known example is probably Buachaille Etive Mor / Buachaille Etive Beag; others would be Meall Glas and Meall Glas Beag; and Ben Wyvis – which obviously has not “Wee Wyvis”, but Little Wyvis, since they are posh up there in Inverness

! Queensberry has Wee Queensbery as its “Mini-Me” hill, lying just to the south and bearing a trig point.
As I headed gently uphill on undulating ground, the Clag well & truly closed in, and visibility was a matter of 50 metres or so at best

. I was REALLY hoping that I wasn’t 180 Degrees off course... I very nearly gave up and headed home, but decided to press ahead a wee bit further. Reassuringly, after a fairly long stretch of undulating vaguely uphill, a steeper hillside presented itself, with a definite impression of some sort of summit looming through the Clag ... and yes, could that be ... a Trig Point Given that this was the only Trig Point on the map for miles around, it had to be Wee Queensberry. From here, Queensberry itself should be a straightforward plod on a NNE bearing. Or in my case, given that I’d inadvertently managed to reverse the polarity on my sonic screwdriver so to speak, “SSW”. Again, I found this all extremely disconcerting

, but pressed ahead on what I thought was the right bearing. Much Clag; “Nite and Fog are my Days...”

I reached what looked like the bealach-cum-gully between Wee Queensbery and (Big) Queensberry, and reassuringly started to head steadily uphill again. Even more reassuringly, a faint wee path appeared, heading the same way I was, although like most faint paths it did have a disconcerting tendency to disappear whenever the going got boggy. I passed several sheep masquerading as cairns.
Could that be a summit cairn through the Clag? No, just a big boulder. Aha, a proper cairn! Clearly not the summit, but presumably a marker of the True Path... On and on I plodded through the Clag. Although never steep, it seemed like a long way up. Could this wee brute really just be 697 metres?
Eventually, though... Could it be, could it possibly be the Summit Cairn? Yes, yes, yes! According to Nick Williams’ book, Queensberry “boasts commanding views on a good day”.
So here is the summit panorama on the afternoon of Wednesday 27th June, 2012: Maybe I wasn’t seeing it at its best though.
I now took a bearing due “east”, i.e. what the rest of humanity would call DUE WEST, across the featureless moorland sloping gently downwards from Queensberry summit, hoping to re-locate the Capel Burn and the track running down its east side back to Mitchellslacks Farm. The Clag was as thick as ever if not thicker, but soon I was again reassured to find a wee burn running due west (i.e. true west) down a steepening gully. This burn was marked on my OS map, and was heading in the direction I wanted. Sure enough, it soon joined a smaller burn coming down from the north, also marked on the map. There were some small waterfalls here that must be very scenic in better weather: Only a few hundred metres further down, the Landrover track running down the east side of the Capel Burn came into view, with some rather picturesque ruined farm buildings a bit to the north: It was a fairly long plod back down to the farm through the Clag, but at least there were a few Features of Interest. Firstly, some further pretty wee ruined farm cottages: 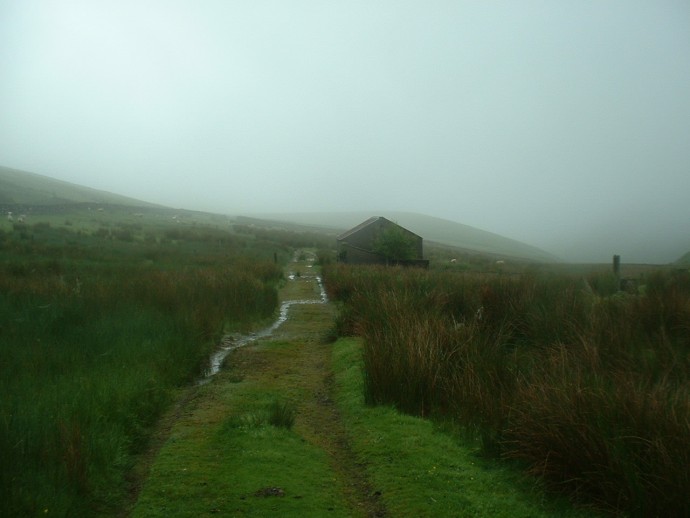 And then a rather odd-looking cairn – is this the mysterious “Long Cairn” mentioned on the Public Footpath sign back before Mitchellslacks Farm? 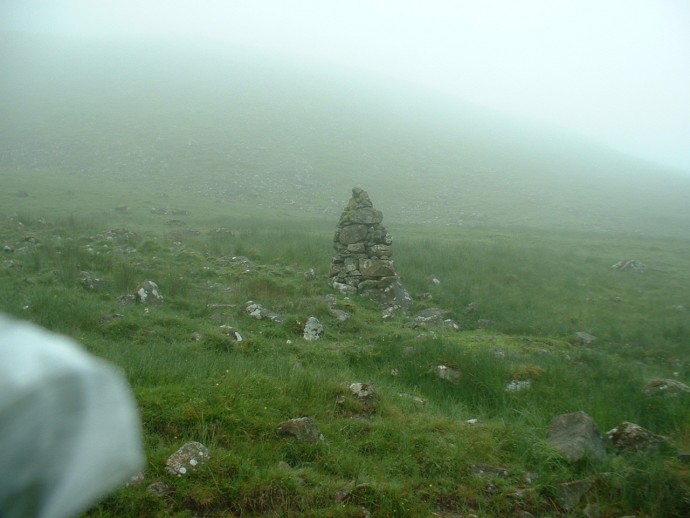 Eventually, I got back to the track bifurcation where the eastwards arm branches off towards the Taj Mahal Sheep Bucht. From here, it was a straightforward stoat back to the farm and on to the car.
No views whatsoever

, but I did get an entirely unexpected sense of achievement out of this walk, given that I’d successfully bagged the Graham in near-zero visibility and with the added “fun” of the shenanigans with my compass. However, I’d be very interested to hear whether anyone else has had a similar experience with a Blackberry phone. Beware

Hmm, sometimes I look at my compass and I don't believe a word its saying! Might be something to do with my phone too!

I didn't get a view from the summit when I was up her either! I do see her from Moffat and all the hills around so she must present fine views on a good day, all the way to the lakes I expect. Living in Moffat I walked her from this side and it is a much longer and boggier affair than mitchellslacks.