I’ve never been a record breaker. Speed’s not my thing. I like to savour every moment in the mountains; soak up the atmosphere if you will. For some reason, I do a lot of soaking up on the uphill bits. I do however usually complete routes within the estimated limits, and even at times a little faster. So I reckoned the Fisherfield round would be doable for me in around 14 hours, give or take the odd half hour. As it happens, this turned out to be a tad optimistic.

This route is one I’ve been hoping to do for a long time. Various injuries had thwarted previous plans but now, back to relative fitness, the Fisherfields were on! My friend Kim was keen to join me and the weather looked set fair for the planned climbing day. The actual climbing day turned out to be a day later due to other commitments by which time the fair weather window had closed for the summer and our navigational skills were about to be tested.

The walk in was pleasant; relatively dry and midge free with views of one of my favourite mountains, An Teallach. 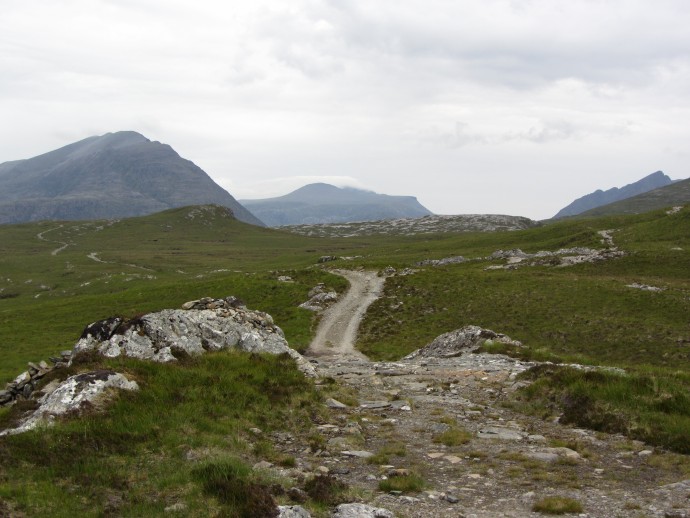 walk in to camp spot close up of An Teallach

Then a fine camp spot near the river to pitch Kim’s veritably palatial two-man tent. At this point the midge fest began and continued throughout the night as wave upon wave of midgie battalions assaulted the tent. Suffice to say I was in that tent faster than a fast thing with a following wind and didn’t venture out til morning. The plan was to set off at 6am but a bit of a faff-fest meant we actually left at 7am. My previous close encounters with rivers meant the first crossing was tentative but thankfully uneventful. Then the steep slog up the first Munro, Beinn Chlaidheimh, punctuated with frequent interludes of soaking up the atmosphere and getting friendly with the locals. looking back down to camp spot Eventually we reached the ridge leading to the claggy summit cairn. Kim on summit of Beinn Chlaidheimh

On the ascent to Munro number 2, Sgurr Ban, the clag cleared to provide tantalising glimpses of the surrounding mountains. looking back to Beinn Chlaidheimh

Until closing in again at the summit taking in the "view"

Careful navigation was needed now with frequent checks of map, GPS and compass as there was no evident path down to the bealach. Much wobbly, wet boulder hopping later we looked up at the start of the ascent to the third Munro, Mullach Coire Mhic Fhearchair and thought....hmmm! Though steep, we actually found this ascent one of the easiest and we were quickly on top to take in the stunning landscapes. So "stunning" in fact, I forgot to take a picture

The clouds did part on the descent and, once through the tricky boulder field, I rattled off a few photos while the weather Gods were kind. looking back to our route The summit of Munro number 4, Beinn Tarsuinn, took more effort but was eventually reached and we were rewarded with our first (and only) summit view Kim on the summit of Beinn Tarsuinn

The descent off Beinn Tarsuiin was a treat, helped of course by the reward of some stunning views at last. first sight of the "tennis court" close up of the tennis court Then a long, so very long, ascent of the 5th Munro, A' Mhaighdean, where navigational skills were tested as the clag descended and remained.

The summit was eventually reached but the reward of “perhaps the finest of summit views” on “the remotest of all Munros” was alas not to be and we could only imagine (and recall from photos taken by more fortunate WH folk) the joy of the surrounding mountain landscapes. Kim on the summit of A' Mhaighdean

At this point, I was starting to feel a wee bit weary. Normally spurred on by mountain views that provide a surge of motivation when needed, I flagged on the descent to the bealach which proved tricky navigationally in the clag. Not to worry though as my senses were soon to be sharply prompted by the ascent route up the final Munro, Ruadh Stac Mor. I'd read various descriptions of this route and was therefore keen to find the reported scree path rather than attempt free climbing up the steep, wet crags – as if!

Fortunately the path was easily found and up we merrily went until faced with an impenetrable rock face. At this point I actually said out loud "You cannot be (insert swear word of choice) serious!"

I don't know who I was talking to (the mountain, the WH route writers, or the weather Gods who were currently chucking rain at us with gay abandon) but there was no way I was going up there. A brief glance to the right however revealed that the path actually continued up steep scree. Hallelujah! Who'd have thought steep scree could be so welcome

Much grunting later and the final summit of Ruadh Stac Mor was reached at 8.25pm. A weary smile on the final summit

The round was complete!

Em, doh, no. There was still the small matter of 12km, 2 river crossings and a bog to tackle in the fading light. Fortunately, the descent off Ruadh Stac Mor was straightforward and we were soon on the excellent stalkers' path heading back round the bulk of Munro number 1, Beinn Chlaidheimh. Initial relief at reaching this was soon tempered by the length of the route home and the thought of crossing two rivers and "one of the worst sections of bog you can imagine", in the dark. Many mountain mantras later, used when both body and spirit are weak (e.g. 1, 2, 3 O'Leary, I saw Mrs Cleary… various versions), the first river crossing was easily made where all previous concerns with all things watery were swiftly forgotten with my focus now on tent and sleep! Mr Bog with his many slimy pools however proved a more formidable opponent and the air was blue with Scottish/Italian expletives by the time we crossed the second river and found the path heading back to our tent. Home sweet home was eventually reached at 1.45am, almost 19 hours after setting off

Perhaps a record for the slowest round?

I think a fitting word is epic but, despite the physical and mental exhaustion, the brief glimpses of the surrounding landscape proved that this is certainly an area worthy of praise and one to be savoured again when the weather Gods are smiling

Some effort in not ideal conditions

. Cheers for the report,

Good report this.
A big achievement!
I've still to do this...don't know how I feel about that!

Shame about the conditions mongoose,great report though and well done for getting round on what looked like a tough day.Hopefully get up there myself in the next few weeks so thanks for posting

Great stuff there, can't wait to do this too. Well done

my knee disnae want to be that long.

Thanks guys for your comments

my knee disnae want to be that long.

Don't think my knees will ever be the same again! Next time I'll need to be fitter, choose a better day and set off earlier as there's no way I want to be crossing that bog in the dark again!

Oh my that is an epic day out

Big pat on the back for yourself and Kim, well done

Shame about the views...you can always check my report

Defo worth a revisit...

I did just that! Good to see what we missed. I'll be back!

You will just have to do it again. Well done Shirley, that was an epic.

monty wrote:Hate to rub it in but the views you mist (no pun intended) are the best in Scotland

As gammy says timely because we are up there soon. Great effort & good to hear that the midges were not too bad

Well done you guys, bugger the times, as long as you enjoyed yourselves.

Thanks Jonny. Good luck with your round - hope the weather Gods are kind

davedanson28 wrote:Well done you guys, bugger the times, as long as you enjoyed yourselves.

Haha! Thanks Dave. It was tough but we did enjoy it

I'm never one to rush the hills though I'm going to try to be a wee bit quicker next time to hopefully avoid any more close encounters with Mr. Bog

Well done, done these 2 weeks ago in the clag as well.