I cycled in from Linn of Dee to cross White Bridge and turn right to stay with the Dee. The track shown on the map became little more than a footpath so, after another 2k, I dropped the bike behind a heather-bound lump - almost on top of an adder that was obviously feeling lethargic in the cold. I continued on foot with the Devil's Point now coming into view ahead, and the Dee meandering through the glen below offering some grand photo opportunities on a brighter day. The Adder that guarded the bike for me The Devil's Point from the Dee

The path gradually diminished as the glen widened beneath the flanks of Beinn Bhrotain. Several pools gave more photographic promise as the occasional splash of sunlight drifted across the cliffs of the Devil's Point, now towering in huge proportions directly ahead. I stopped for an early lunch to enjoy the panorama that included the excellent ridge I had done last weekend over Carn a Mhaim to Ben Macdui, whose top stayed hidden under cloud today. The Devil's Point from the pools The massive hulk of the Devil's Point

With little warning, it began to rain as I set off up the stunning, gorge-like Glen Geusachan, wading through deep, wet heather and snow. Occasional boggy areas had me sliding about as I tried to follow the overgrown path by the burn. This improved as the glen turned northwest and started to gain height, passing numerous roaring falls enhanced by last night's rain or snow that must now be melting up on the Moine Mhor. 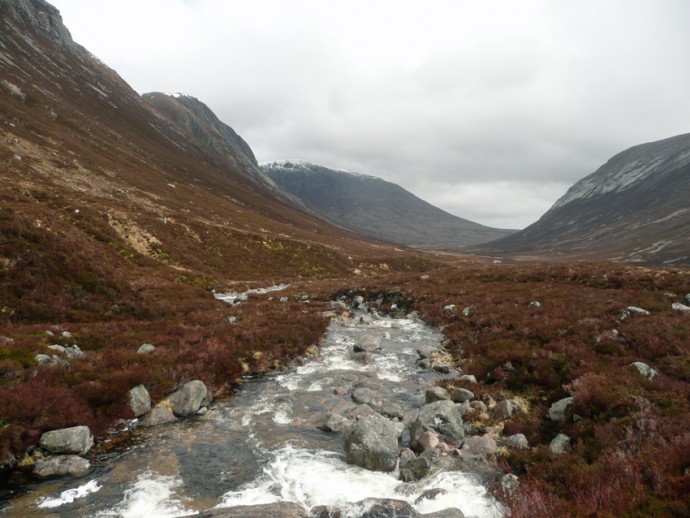 The views back down the glen to the wall of crags on Beinn Bhrotain and Coire Cath nam Fionn gave excellent excuses for stops to regain breath, before I set off up the side burn in search of Loch nan Stuirteag. The rain had turned to snow, but had now stopped as I found the shore of the loch. This beautiful spot had a wonderfully peaceful atmosphere as I sat next to a tiny beach, where a single deer track broke the sand and small waves broke on the shore. Birds called from the opposite shore, but I couldn't see them. A mallard pair swam silently away from me, and a heron drifted past looking for a safe spot to fish. I was tempted to stop here and give up on the Munros, but an icy blast from the west chilled that desire, so I walked around to the other side to join the steady climb up the northern spur of Monadh Mor. Looking back to Loch nan Stuirteag from the Monadh Mor ascent

The snow returned on that wind and I was getting plastered down my right side as I was overtaken by a total white-out. The compass led me to the summit cairn but, with no views to enjoy, along with the extreme cold, I continued on the bearing looking for the dip before the second top when I was to experience something I had never encountered before: visibilty became so bad that I couldn't see my feet! I was forced to stop and wait for more than a minute (which seemed like an eternity) before it began to clear again. Brightness began to hail the passing of the storm and the veil lifted to reveal that second top and cairn just 50m away. Beinn Bhrotain looked absolutely massive from here as the sun put in an appearance. I dropped down from Leac Ghorm into the narrow col to see the Devil's Point now brilliantly lit, and Carn a Mhaim almost clear beyond. Coire Cath nam Fionn was now directly beneath me, and those Beinn Bhrotain crags I had admired earlier now rose steeply up the side of my next objective. The rock appeared quite broken, which would probably deter climbers, although I couldn't see all the way along the wall. Icicles draped these incredibly cold and dark north-facing bastions as I made my way up onto the boulder field above. The sun returned as I gained the summit plateau and made my way to the cairn. Grand views all round - what a contrast to the previous summit - but it wasn't to last. I felt priveleged to have seen it though as I dropped down the broad south-eastern spur, then south for 1k before turning to follow the series of smaller bumps and tors eastwards to regain the path and bike.
The adder was still guarding it, but didn't flinch as I lifted it up and away to leave this beautiful creature in peace.
The ride back was swift, but I had to stop and take a last look back at that stunning scenery before reaching White Bridge and the easy track along the now sunlit river Dee to the car. A final look back at The Devil's Point

This is a cracker of a walk, but getting there definately requires a bike unless you are prepared to backpack in - and you will need to be lucky with the weather to enjoy some of those views. And watch out for those adders!