It is with regret that MrsR announces her retirement

It is with regret that MrsR announces her retirement


Plans had been afoot for some time for MrsR to join me on a wee walk, but up until now that hadn’t happened. My employer has a day out to Aran planned for early July and a group of us are planning to take advantage of the opportunity to enjoy a walk up Goat Fell (weather permitting, of course

). MrsR is keen to join us, but wanted to get a practice walk in first. And so, a couple of weeks or so ago now MrsR and I ventured out to conquer Ben Vrackie

Unfortunately MrsR does suffer badly with her back, so really any walking like this probably isn’t a good idea

Having said that, she was keen to give it a go and so I was keen to get out into the hills with her. Ben Vrackie seemed like a good choice to me. A short walk; not too steep (except near the top maybe) and hopefully some good views to make MrsR’s pain worthwhile. But then this is Scotland........

Eventually arriving at the car park though, and kitting up, we were ready for the off. At this stage MrsR was all smiles and still looking forward to her day out on the hills 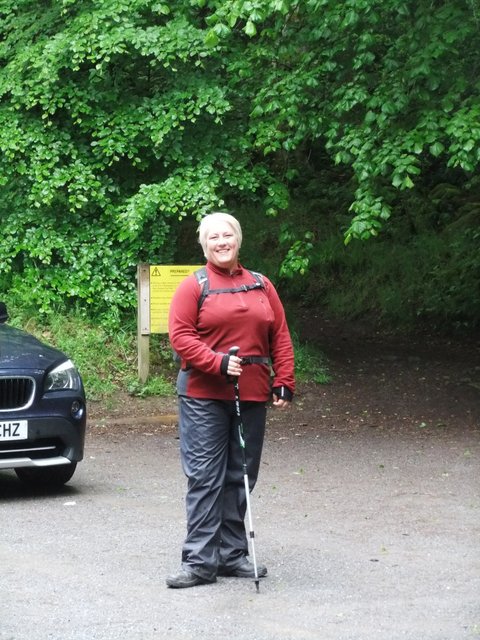 MrsR all smiles at the start 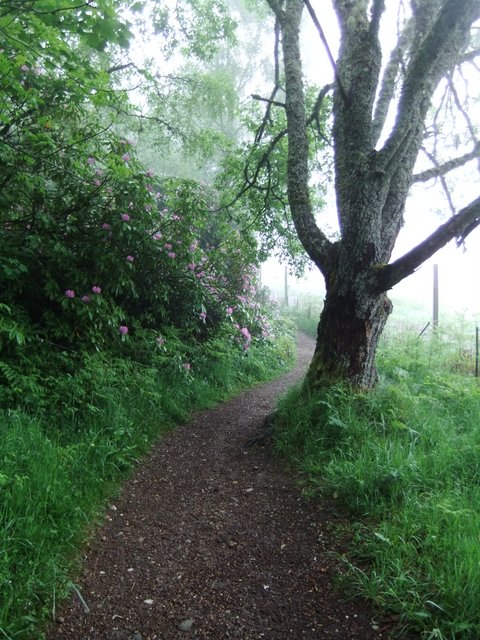 The pathway near the start

From my point of view the walking was straightforward, but I knew that for MrsR the day would present quite a challenge for her. We set off at a nice, leisurely pace up the good path at the back of the car park.

I took the opportunity early doors to indulge in a bit of arty photography, as a change from my usual mountain views. It was a bit of a shame, but the weather on the day wasn’t particularly brilliant 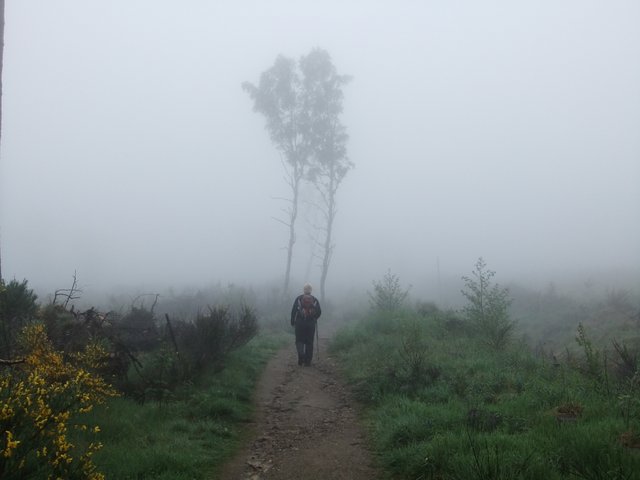 MrsR walking into the clag At one point during the day the sun did look like it might actually break through, but any ideas of that happening were soon put to rest as the cloud rolled back in and normal service was resumed. A shame for MrsR I felt, as I would have loved for her to get the reward of some decent views as a reward for all her courageous efforts in getting to the top.

And she wasn’t wrong either. Not only could we not see a thing, but we couldn’t hear a thing either. This idyllic setting was to be ruined later in the day though, as a couple of (@!$@ing) numpties thought it would a jolly wheeze to bring their trial bikes up and tear over the hillside whoopin’ and a hollerin’. Sadly, they didn’t fall off Peace and quiet in the mist 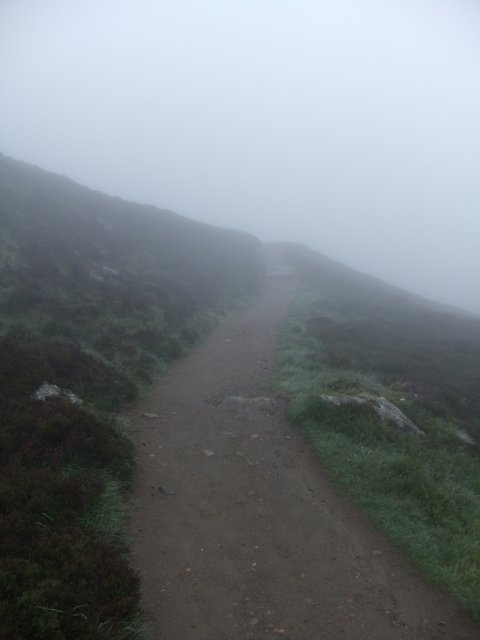 Soaking up the early views

The walk up to the Loch a’ Choire was pretty straightforward, on a good path. But I knew MrsR was struggling with her back and her legs. We took the chance to take a short rest at the carved wooden seat just before the Lochan (at this point we couldn’t see the water, on account of the clag). I knew that from this point on things would get steeper, so perhaps it was a good thing we had the clag, so that MrsR’s spirits wouldn’t be hit by the sight of what she had to come Much steepness just the other side of this mist 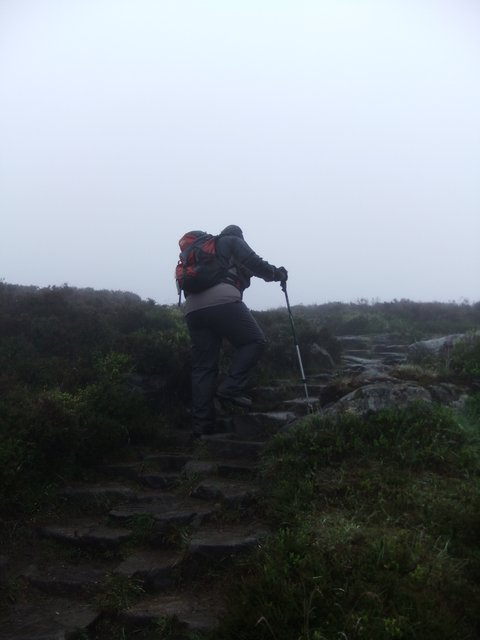 I’ve got to say that the steeper section up to the summit of Vrackie left me with mixed emotions. Incredible pride in MrsR for her resolve and stubborn determination to get to the top

Guilt that I didn’t make us turn around before now, so that she hadn’t put herself through anymore (even though I know she would say it was her choice to carry on) There were lighter moments on the way up though.

Oh, how she laughed

But, despite the pain (and the Malt Loaf incident) she made it to the summit Vrackie summit, in the mist We spent a short while at the top, checking out the various hills we couldn’t see

It was a bit chilly though, so we were soon heading on our way back down. The steep section (which had proved MrsR’s nemesis on the way up) seemed to be much easier for her in descent. Not that she was too chuffed as I was clicking away taking photies of her coming down "See you! If you're videoing me a'm gonnie lump yous in a minute" Eventually though we were back at the Lochan. Despite the @!$@ing numpties away somewhere on their b****y bikes the Lochan is a magical spot in the mist, with a real sense of isolation to it. Well worth another brief stop. The path, as we arrived back at the Lochan, which MrsR had found easier on the way up, suddenly became torture for her on the way down

Not only was she in agony from her back and legs, but now her feet were really sore too. But she battled on and in her own time made it back to the car, despite the pain she was in. And I’m proud of her for achieving that The best view (no, the only view) all day

This was a tough day for MrsR, what with her back and all that. But she made it to the top and then she made it back down. On the final section of path she did feel able to announce to me that in future I’d be on my own for this walking malarkey

She had announced her retirement, with immediate effect. Hopefully though I will be able to coax her out of retirement on the odd occasion in the future for some easier low level walking

After a day like that and what you put her through Pete, I think something worse than a "glesga kiss" would be warranted - even I'd be having second thoughts about keeping going in those conditions

....maybe. Hope you get better conditions when MrsR comes out of retirement - cheers

Well done both of you on getting to the top,real shame about the weather cos' Ben Vrackie is a great wee hill,maybe a bit of sunshine would have lifted MrsR's spirits a bit.Mrs pigeon struggles a bit on the bigger hills as well with various ankle and knee complaints but can still manage some good distance low level walks,she has done most parts of the WHW and some of the rob roy way ,maybe no need for MrsR to give up completley

Great read Pete though probably not so great for MrsR, anyway congrats to her for sticking with it, I'd have packed in before starting in that damn clag

You got some great photos mate even with the clag. I dragged Sarah up a little mountain today, unfortunately it had the last 500 feet or so of deep snow and then it rained on the way down, she was not impressed

Well done to Mrs R for not giving up

Myself and probably lots of others on this site know how you feel about having to be almost apologetic for the Scottish weather and the conditions on the hills!!!!