An atmospheric day on Tower Ridge

An atmospheric day on Tower Ridge

Often described as one of the finest mountaineering routes in Scotland, Tower Ridge has been a route I have been wanting to attempt for a long time!! It is described in scrambling books as a grade 5 and rock books as a Diff and is perhaps a ridge that crosses the scrambling/climbing boundry – so would it be a scramble or a climb???

The weather up until the Sunday had been wet to say the least and our initial plans to try a climbing route in the Cairngorms were cancelled before the weekend had even started!! I had suggested an easier scramble or a hillwalk if the rain was to continue. When Tower Ridge was suggested it took no longer than nano second for me to agree .

As it was June we did not have an extra early start and left the North Face car park (which was empty) at 09.30, the weather looked ok as we walked in with only a few light showers before we reached the CIC hut. The cloud base was around 550m and we occasionally got glimpses of our objective, looking atmospheric as the cloud swirled round and over the North Face. 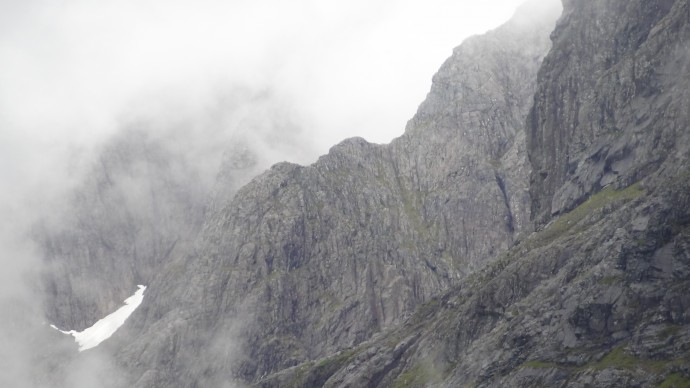 ridge on walk in

We reached the ridge from Eastern Gully and up to the Douglas Gap. The ascent up East Gully was extremely wet and slimy! Care had to be taken with the wet rock and we decided to see if the rock was this wet once up on the ridge. The rock remained very wet until we had ascended the Little tower although it had not rained again. However just before the Eastern Traverse the rock seemed to dry out a little and certainly gave more friction. Up until this point the ridge had certainly got our attention and I would definitely suggest it as a climb and not scramble in these conditions. I had read many accounts of benightments , mainly in winter conditions but also some in summer, I now realised why. We had been moving slower than expected due to the greasy rock and belaying parts which would have proved a lot easier if it had been drier. However once past the Easter Traverse and through the extremely wet Cleft – a huge crack which feels like clambering out of a pot hole- the climbing started to become enjoyable once again 

We had entered the cloud not far above the Douglas gap and had only a few breaks, this was a shame however it made the day atmospheric and a little foreboding at times. This was most evident as we approached the infamous Tower Gap. Walking up to the gap along the narrow ledge with large drops falling away to nothingness into mist was amazing. Exposure was now on both sides and it was not long before I had to cross the gap!! It was not too difficult but the safety of being roped up helped. The consequences of a fall here would be serious! The last section would be described as a scramble to the top and it was enjoyable. Still no views though!! We then descended back to the North Face car park via the halfway lochan and got back to the car at 18.30.

A fantastic day, and probably due to the weather , we were the only party on the ridge and also saw surprisingly few people on the zig zags on our descent. My mind was also made up that is was definitely a climb and not a scramble especially in these conditions!! Looks like you would fairly need a heed for heights on that route.pity about the dreich mochy conditions

The exposure on the little ridge to Tower gap was immense!

I climbed Observatory Ridge a while back and this route's been on my list to do since then but now I'm thinking, hmmm! Looks a lot more exposed. Would definitely want a dry day! Well done!

Brought the memories (nightmares?) flooding back. Did this about 40 years ago on a university climbing club Spring outing, in the days before reliable mountain weather forecasts. Started snowing heavily during the final 'scramble'. Running behind schedule, 3 of us spent a chilly, fairly sleepless night, sheltering by the summit, 2 at a time in a 1-man bivvy bag. Fortunately, it didn't get perishingly cold and windy and we'd warned friends we may bivvy out if we got held up, so no MRT dramas.
Got up (and down!) the In Pinn on Skye last week but not sure I'm up to a repeat of Tower Ridge any time soon.
Well done! Great report , great pics, great video.

Your video was superb, very well put together, and with the headset video it really showed the exposure of the Gap etc.

Good memories for me watching it again...I did it about 18months ago. My TR and video link are on this site somewhere.

I wouldn't have liked doing it on greasy rock

Your video is fantastic

An amazing route, cracking video, my favourite report of the month (June).

Ps I did this pretty much a year ago to the day!
I got great views and dry rock, you are far braver than me!
We seemed to have taken different climbing lines right enough.
MY MATE TOLD ME IT WAS A WALK!!!!

I always thought I'd like to give this one a go when I get a bit more experience, however, after watching that video it has now been struck from my "To Do" list

Great video but I don't think I'll ever grow the necessary "kajangas" to do this route.

fantastic vid wilkiemurray, those headcams really show the climb full on. the guys in my club done this in june one with his 11 year old nephew luke !! good to see tower gap, brought back memories of this year when i done glovers chimney in february, an 18 stone irishman fell from your mates belay stance on top of me climbing out the chimney, his crampons missing my arms by inches, put the bejesus into me. well done keep the vids coming

Feel like I've done this now so don't have the urge to go rushing up there, at least not when it's wet! Well done

A fine wee outing on a less that summery day......you forgot to recover your sling at the gap crossing......more than just a sling? left behind there.....useful though

Must say that I always throw a sling over that big spikey lump before dropping down into the gap.....T. ridge is always a grand day out in the hills.