Its not Vane to climb Narnain

Its not Vane to climb Narnain


Today I was mainly out with Ian and Jake the dug.

Ian had climbed Vane and Ime, I had climbed Ime and Narnain. After a lot of subtle arm twisting Ian chose to revisit Ben Vane for me if I revisited Beinn Narnain for him (after he foreswore never to set boot on Ben Vane ever again).

The weather was not too promising when leaving home, drizzle and very low cloud, but driving up the side of Loch Lomond out came the sun and the cloud lifted - nice.

Left one car and at Succoth and drove up to Inveruglas and walked in up the hydro scheme road in Coiregrogain, the top of Ben Vane was covered with cloud. 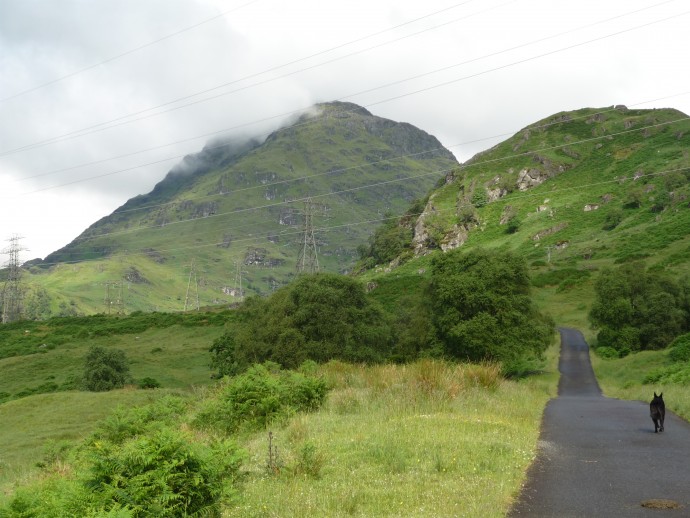 Ben Vane from the road in 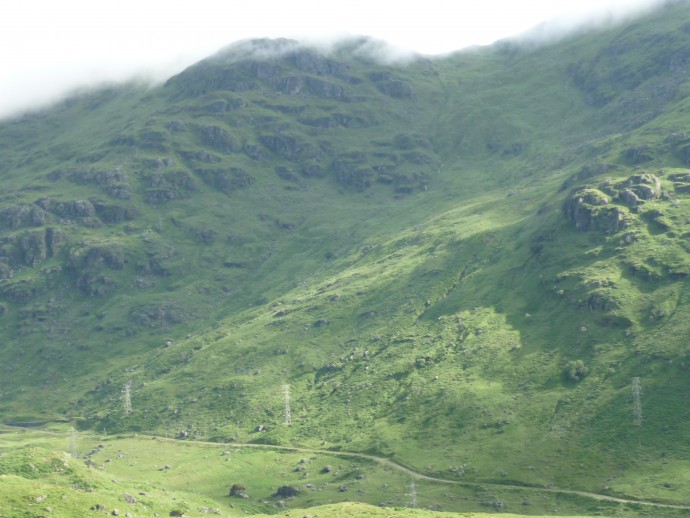 Once on the hill proper the ground was water logged with the recent rain but not too boggy. As we climbed up to the cave squadrons of midges came out, if Jake stood still it looked as his coat was shimmering. A small breeze came up which knocked them back but when the path led back into the shadow of the hill they seemed to rise from the ground in clouds.
The last 100m was walked in cloud, light drizzle and a stiff breeze, 2hrs 50m to the top. A quick drink, a bite to eat and a chat with a guy from EK who climbed the last false top with us, take a bearing for the descent through the clag into the Lag Uaine and off we go. 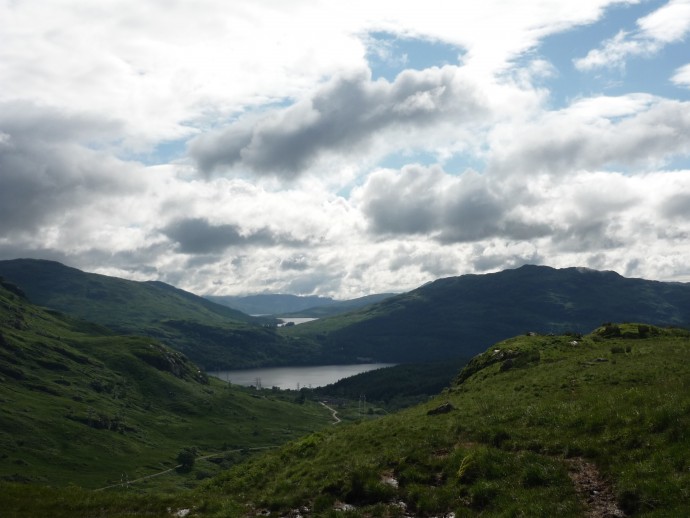 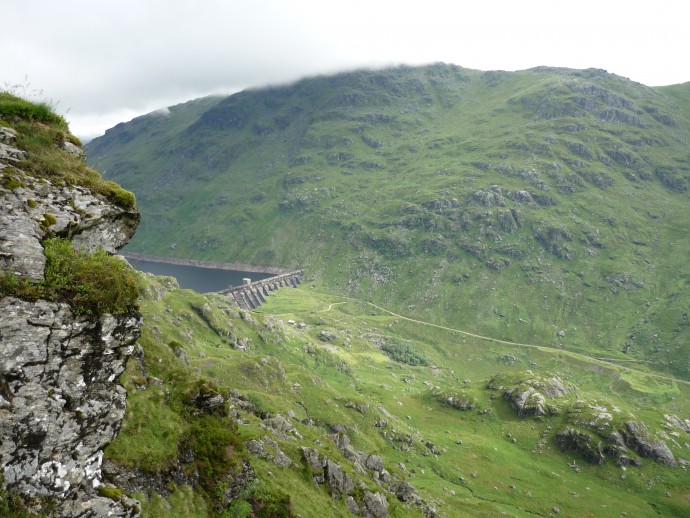 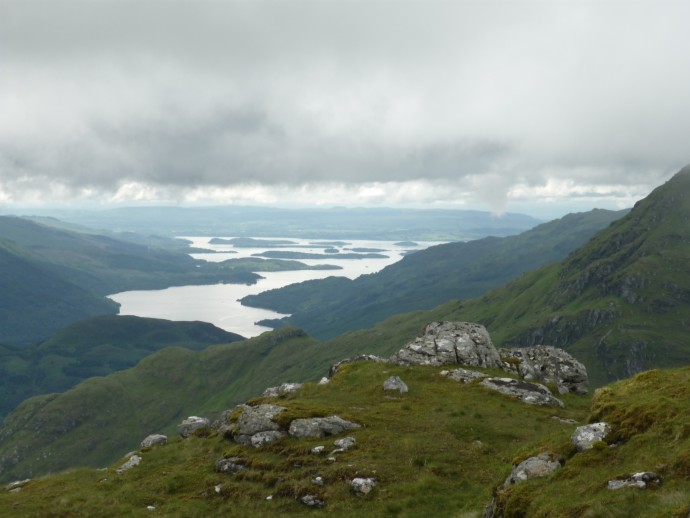 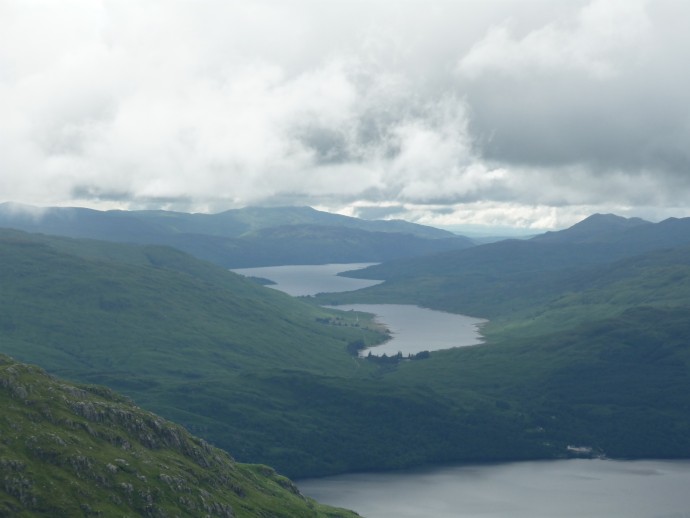 As we did not want to slogg up Ben Ime the plan was to descend to the front of the Lag Uaine at the junction with Glen Leacann Sheileach near the 490m mark. Then conduct a rising traverse to the Bealach a'Mhaim at 637m avoiding the worst of the crags under the east wall of Ben Ime. 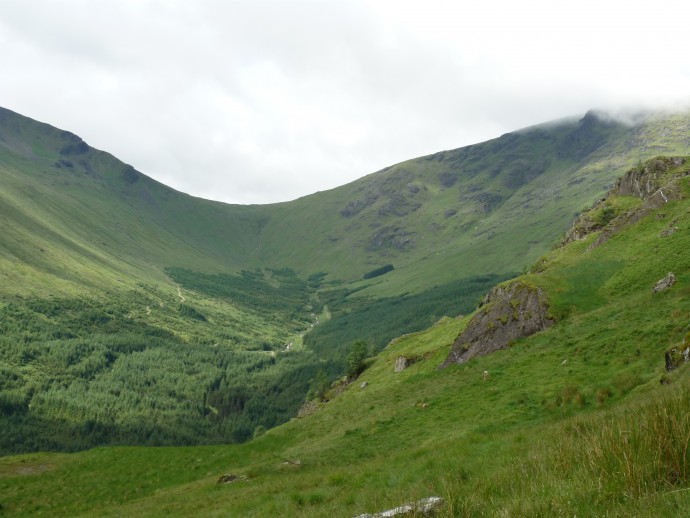 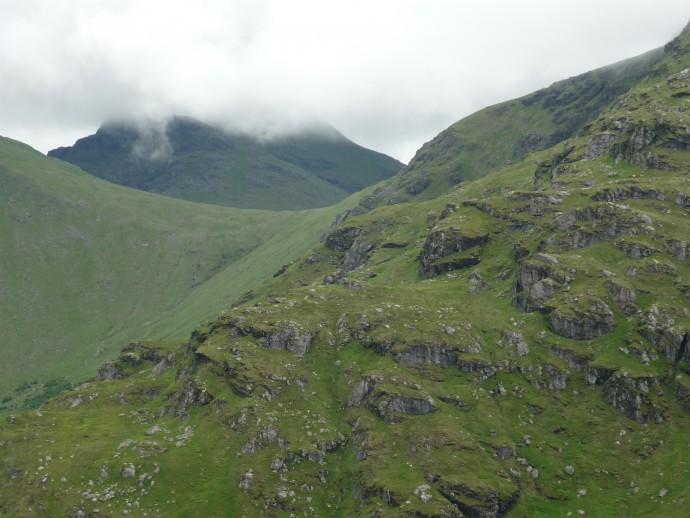 Coming off Ben Vane we first went north west to keep away from the crags due to the restricted vision but once below the cloud we struck straight down to the small lochan. From there it was straight forward if not very steep to thread through the crags to the river flowing east out of the Lag Uaine into Coiregrogain. 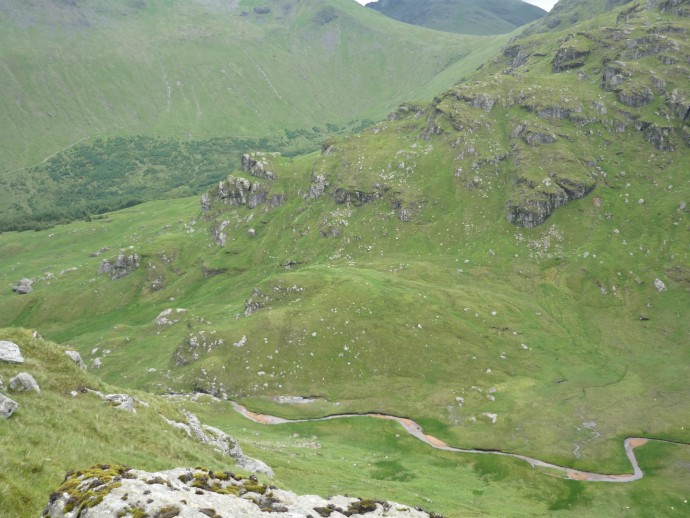 Descent through crags to Lag Uaine

The traverse was slow going because of the rough ground but made interesting by constantly having to check the route ahead round/over crags, boulder fields and just plain steep tussock grass slopes. Could have done with the ministrations of Caberfeidh as 3" cut off from right leg would have eased the traverse. 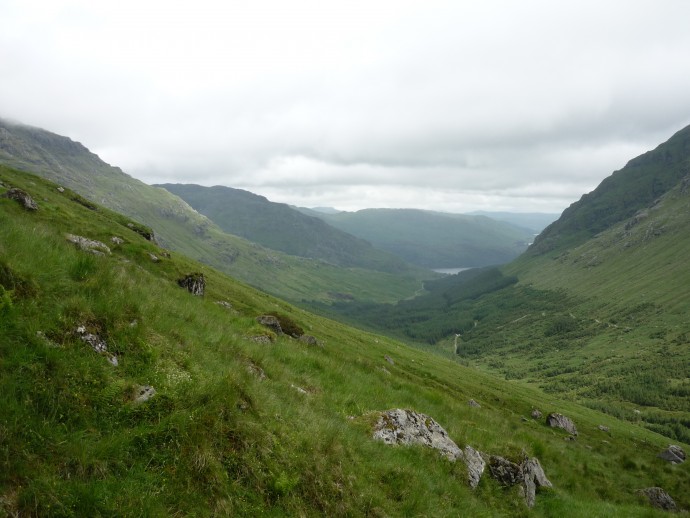 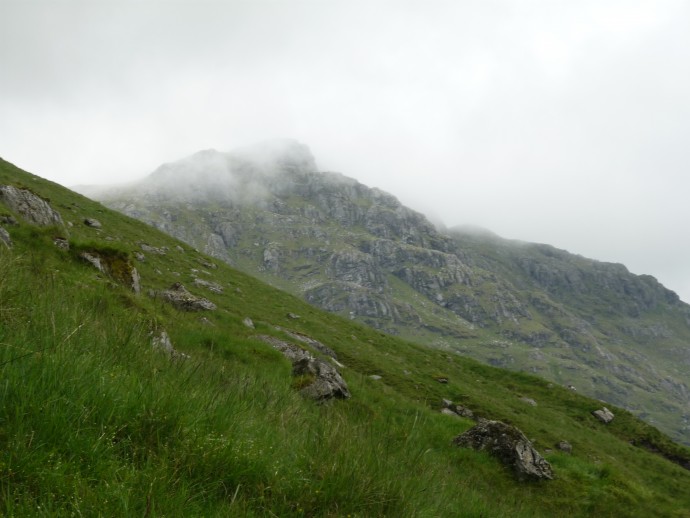 Back to Ben Vane from the start of the traverse 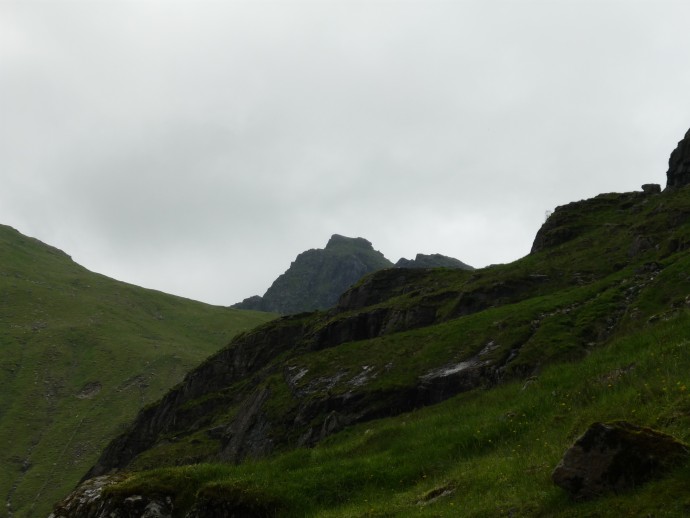 The Cobbler making an appearance 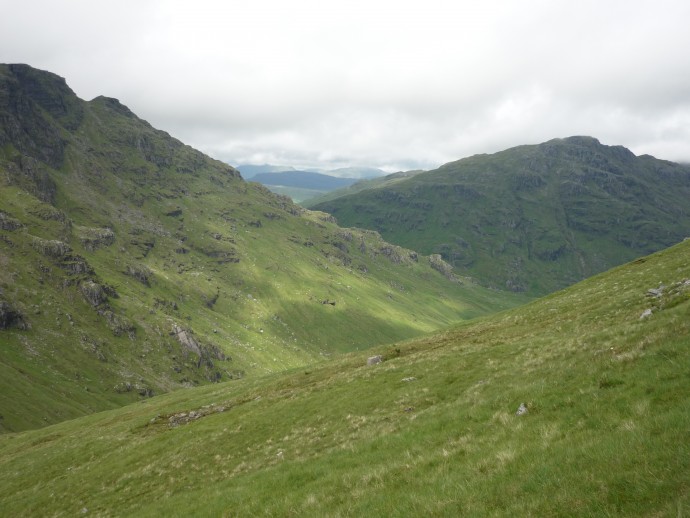 Start of the traverse (mid picture) 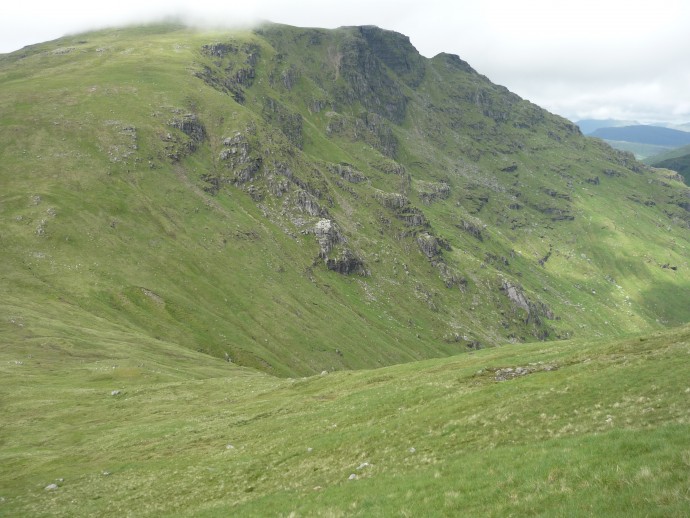 Crags at the end of the traverse

Stopped for lunch at the Bealach a'Mhaim and watched the herds of free range walkers coming up the Coire a'Bhalachain road under the Cobbler. A good 20 minutes rest and then onwards and upwards.

As we cleared the height of Ben Arthur the view down Loch Long was good and it was possible to pick out Ailsa Craig and the Isle of Arran and the little stick of Inverkip power station chimney.

We could see various areas of low cloud/rain showers around us but so far had been lucky but within sight of the trig point it was our turn. We sat for 30mins drinking a beer and shooting the breeze wating for the shower/cloud to pass so that we could get that photo of the view. Received some funny looks from other walkers as they passed huddled up against the weather. 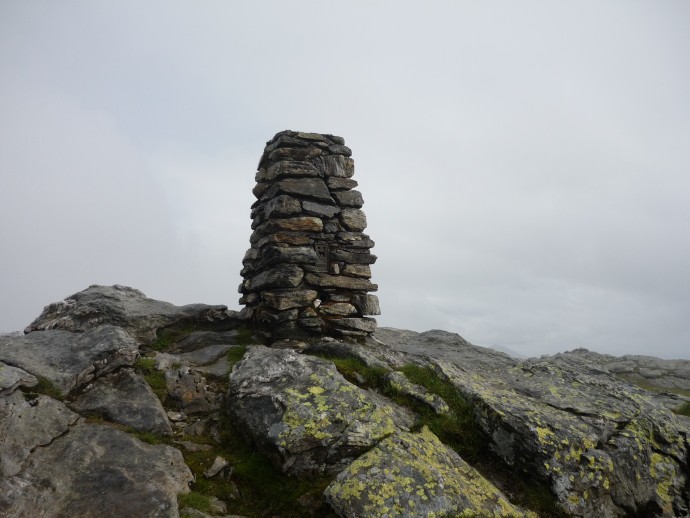 Trig point in the wet 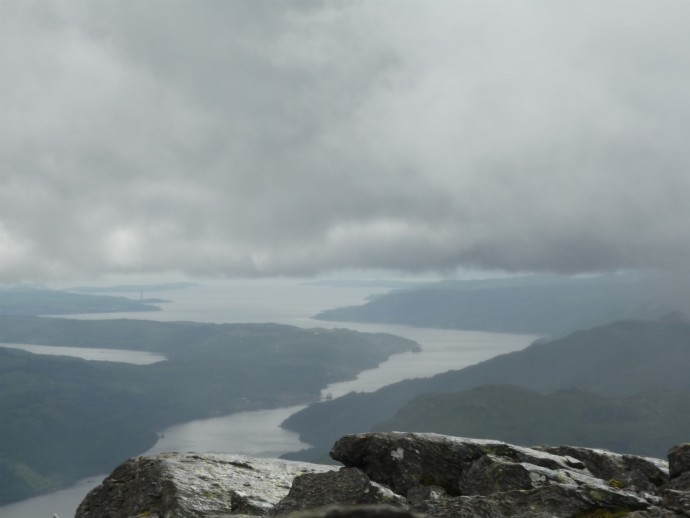 Poor view down Loch Long after the rain

Decided to carry on down the hill as we had started to cool down too much.
Followed the path down past the spearhead and over Cruach nam Miseag, the path proved to be slippy with wet rock,loose gravel and slick with mud. The ground was firm but the top 10mm of wet soil/mud broke away and nearly caused some painful ballerina type thigh stretches. It was easier to walk on the rocks in the stream bed. 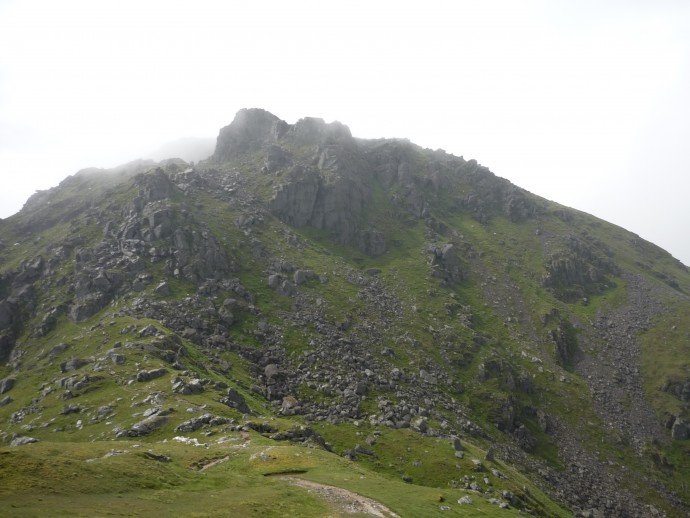 Back to Narnain from Cruach nam Miseag

The final part of the descent following over the concrete blocks of the old rail-track was much more eroded than when I last climbed up that way in 2001. Greeted by the Loch Long midges in the car park at 17.10, not a fast walk but we did have breakfast and second breakfast on the ascent/descent of Ben Vane, lunch and cocktails on Ben Narnain.

Enjoyed reading that, seems like a grand day out

Nice walk Frigate. Different route to the norm. Weather was ok too. excellent

That's an interesting route , off the beaten track, a nice way to combine these two . A good spot for midgies too !

Great day out Kev and an interesting aff piste walk 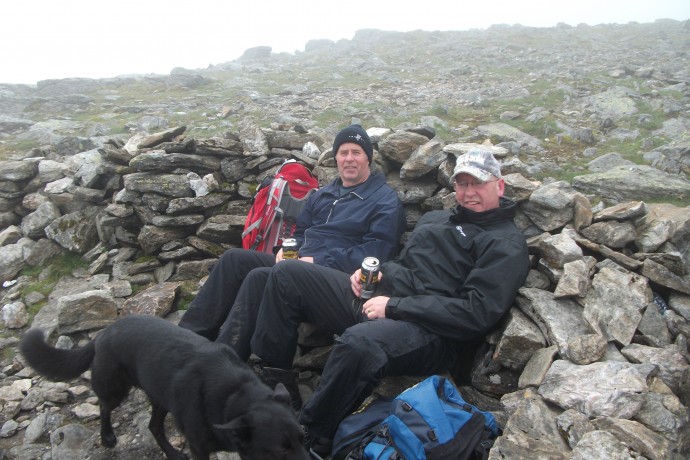 where is the pool table

Thanks for the comments, I'd like to say that the route was picked because it is obscure and slightly adventurous but truth is coming back from a 7 week lay off after suffering a viral infection and sinusitis I did not have the stamina for the hill in the middle.
It was surprising what effect this had on my fitness and stamina levels having been out every weekend from the New Year, but now back in the saddle and will be chasing (lagging) Pigeon up the Hills

pigeon wrote:You look like a right pair of pish heeds in that last photie

Some people use isotonic or caffeine drinks for replenishment or stimulus, the beer was a better reward only thing missing was the poke of chips. Can you cook chips on your stove?

Having wrote in my report about 'receiving some funny looks from other walkers', I understand why now. Picture paints a thousand words as two geriatric lushes camp out on a mountain scaring the gentle folk.