Meall Lighiche and its two neighbours

Meall Lighiche and its two neighbours

our_route.gpx Open full screen  NB: Walkhighlands is not responsible for the accuracy of gpx files in users posts
Just a quick report for a very nice round of some of the smaller Glencoe hills . The forecast was for torrential rain later in the day so I set off early and got parked up in a layby on the A82 just before the turn off into Gleann leac na muidhe . The first hill of the day, Meall Mor looms above the road , I had thought about heading up the Glen and doubling back to make a gentler ascent but I decided just to go for the straight uphill method . 600m of ascent in under 1km , steep but nothing too bad , thankfully the ground was dry and only a couple of places needed hands- on , definitely not a route for a wet day though . The Pap of Glencoe

I was glad to reach the summit plateau and a nice cool breeze , some fine views from here . Summit ridge with the Corbett behind ,Sgor na h-Ulaidh to left 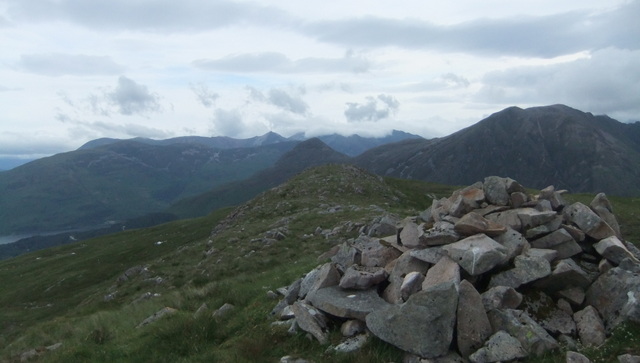 A look back at Meall Mor summit cairn , perched on a volcanic dyke . AE behind

The route onwards from Meall Mor to Sgorr a’Choise leads down to a bealach over lovely springy soft turf before contouring around above the forestry to gain the SE ridge ,meeting a line of iron fenceposts which continue to the summit . A deer fence crosses the ridge but there is a gap 25m north of where it meets the line of metal posts . The ascent steepens before a final rocky section brings you to the cairn , again some lovely views from here . Two Grahams done ,it was time to head on to the Corbett. The descent to the next bealach was on easy grassy slopes becoming a bit boggy down lower but before long I reached the drier slopes of Meall Lighiche . 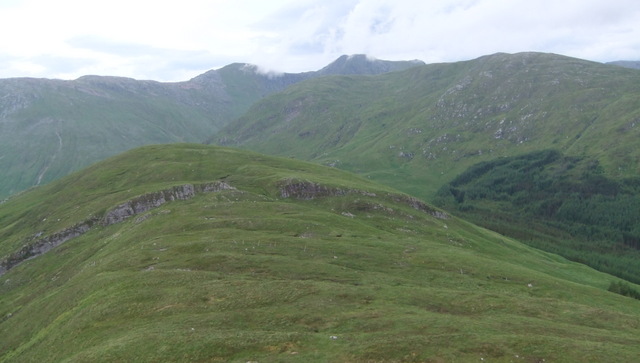 Whilst trying to pick a way up I noticed another old line of fenceposts , a quick check confirmed these led to the summit , the 400m of ascent over grass and rock was easy enough , not half as steep as it had looked from a distance . When I reached the summit , I found some shelter from the wind behind the cairn and had a bite to eat admiring the scenery , the steep eastern face of Sgor na h-Ulaidh looks imposing from here . Descent , Bidean in the distance

From the summit a path follows the fenceline east before turning north to descend over Creag Bhan to the glen below , I lost the path (as usual ) but the ridge is fairly straightforward , one or two knolls and crags to avoid and I soon found myself at the Allt na Muidhe. From Creag Bhan down to the Glen

I had read a couple of reports which included some excitement trying to ford the river but the level was low and I hopped across easily . I enjoyed the walk out along the valley , the Aonach Eagach looking impressive across Glencoe . I had rushed a bit on this walk , half expecting the heavens to open at any moment but thankfully it stayed dry . These are nice wee hills tucked away in a quiet corner , a great spot for a wander and some peace and quiet . Nice wee round Gavin, will venture up there soon hopefully to get the two Grahams done. Meall Mor looked blooming steep when passing it last week but i suppose you climb steeply and gain height quickly

Nice route Gavin - one for the walking bank

Johnny, it is a bit of a grind up Meall Mor but once that bit is done the rest of the walk is a stroll .

Leithy , a nice wee corner to explore . And not too far to go for post walk refreshments .

Looks a good round Gavin and i wonder how many people would do Grahams around Glencoe? One to remember i think.
Dave

Nice hills - Sgorr a Choise in particular - which I did in rubbish weather. Must go back on a day like this

You did well with the weather as I was on Buachaille Etive Beag yesterday and it was pretty miserable. Every top was covered so I'm glad to see someone got some views up there over the weekend

Cheers Dave , certainly not much traffic on these , a quiet spot .

Hi Malky , I read your report on these , thankfully my day was half as long and twice as dry as yours

Fudgie , shame you were in cloud on BEB, I think the lower hills had most of the views this weekend

Interesting route, Gavin, with some nice views - will need to bear this in mind for future shorter days - strange looking "water feature" as well - cheers

Cheers Rockhopper , certainly would be a nice winter wander , there would be some grand views of the bigger Glencoe /Glen Etive hills under snow