I have been looking forward to 'bagging' a skye munro for years. I had planned it a couple of years ago, however, a nasty diagnosis from my neuro-oncologist put pay to that. It didn't stop me going to Skye with my ex and wishing even more that I could get a Skye munro, although my ability to walk no more than a couple of miles and a small assent without crushing pain put pay to that.

So, Bla Bheinn might not be the hardest but I was still looking forward to today so much!

As I left Glasgow, the weather really sucked. It got better though as I headed North until at the Great Glen I hit the weather coming in from the North Sea. The forecast said it would improve the further West I went which it did and for a moment, I had the sunny's on as I crossed the bridge. Not for long though as the closer I got to the mountains, the worse it got.

I knew it wasn't going to be a day for views but I don't mind, sometimes it makes it a bit more fun

The walk up the path from the road follows a good path which isn't to steep to start with, there is a large steam on your left with some nice waterfalls. random shot of the mountain and clouds below After 10 mins, the path steepens and becomes scree covered once you cross the stream. An Stac is to your left. The path works its way up into Fionna Choire and the bealach at the back. This was my target. Once on the bealach, the weather worsened becoming more windy and cloudy/foggy. I was hoping to get some good views but I knew by now it would be unlikely that I would get to see the cuilin.

From the bealach, I turned right, heading North up the steep slope, I kept to the Western side as doing so allowed me to keep out of the weather for as long as possible. toward the Southern Summit, the wind dropped and there was a hint of some Sun coming out to play! The summit cairn is not far from the path and from here, you head North to get the 'real' summit on the other pinnacle. There is the matter of the small cliff / ledges to get down but there are plenty of good holds and there is only one real point of risk. This takes you onto another bealach from which you walk up to the Northern summit and trig point.

Rather than going back the same way I came up, I followed the Eastern slope and path down toward Loch Fionna Coire where I met the original path I came up.

If I were doing this again, I might do the Northern summit first so as not to have to drop down the ledges between the two. 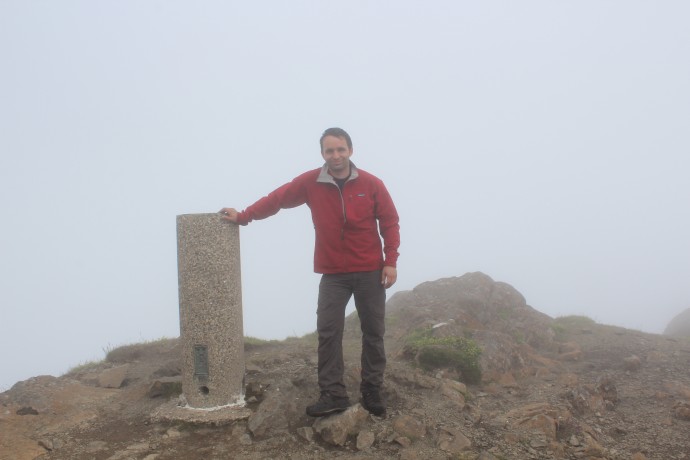 my first Skye munro as well

. One of those hills that is good in sun or clag

well done, what a cracker for you 1st skye munro

LeithySuburbs wrote:my first Skye munro as well . One of those hills that is good in sun or clag

This was my 1st too and had a nice sunny start followed by clag where I saw hee haw at the top, but still one of my top 5

cheers guys, I think next time I am over to do the cuilin I will pay another visit to get some good shots, weather permitting...