I suppose this is cheating but life has been busy for the last month and to be honest the thought of spending more time typing at the computer was unbearable. My only solace from the grind of work and attached pressure to meet deadlines was to bag a few more Wainwrights, enjoy the company of friends and on the last trip to get thoroughly drenched.
Three trips in one report, value for money

, spaced out through June and early July. The hills done, may strike those of you reading my stuff for the first time as a peculiar way to go about things, but there is a good reason. I’m finishing off all the hills I managed to miss out in over twenty years of going to the Lakes and thus completing all the Wainwrights.
The first trip was with Jim and the faithful hound Lassie and involved driving to Buttermere via Newlands with the aim of getting Starling Dodd and Great Borne or Herdus if you prefer. Jim and I had glimpsed them through the mist on a previous jaunt around the Loweswater Fells and I knew they were on my ‘still to do list’.
This was the ‘Jubilee’ weekend and I knew the Lakes would be busy so we set of bright and early arriving in Buttermere about 8:30. Fortunately the weather decided to stay dry, and parking at the top of the village where the road comes down from Newlands (it’s free!!), we kitted up and set off.

our_route.gpx Open full screen  NB: Walkhighlands is not responsible for the accuracy of gpx files in users posts
The route was going to be straight forward from Buttermere to Scale Bridge then a right to the bottom of Scale Force (it’s the biggest in the Lakes y’know, wait till you see the photo!). Then up the path next to the water to the col between Starling Dodd and Red Pike, another right to Starling Dodd and onwards to Great Borne then down into Mosedale, back to Scale Force and back to Buttermere. 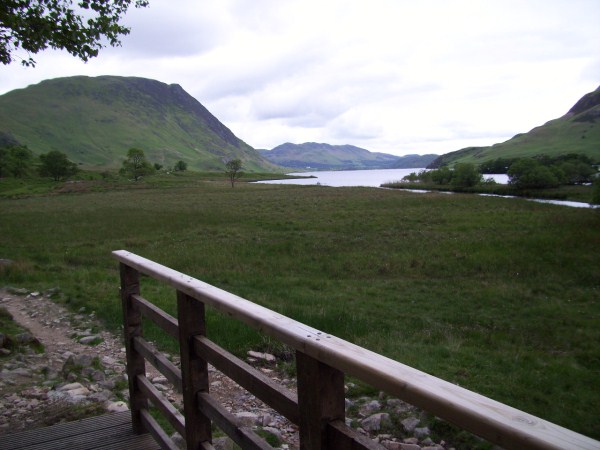 A view of Crummock Water and a weather report

As you can see the weather was ok and was forecast dry so we made good time to Scale Force, to say we were underwhelmed was an understatement, this was the longest waterfall in the Lakes but as you can see we were clearly there at the wrong time of the ‘wettest June in history’. The raging torrent that was Scale Force

We did the tourist bit and took photos. Jim doing his bit to make it look exciting and worthwhile

Climbing steadily upwards on a good path the sound of rushing (no, falling, no, trickling, disappointing, yes that’s it) water in our ears, it suddenly went quiet as we bore left a bit and away from Scale Gill and upwards towards the col. Jim who is normally off like a greyhound on the uphill bits, seemed strangely slow, ‘hey I’m getting fitter’ I thought managing to keep up, no such luck! Jim said when asked, that he was still recovering from a chest infection that had laid him low for a week, ah well, a man can dream.
The ridge up to the summit was a steady plod and the summit a pile of stones and an ancient ‘Tate’ installation called ‘rusty fence posts’ I’m nominating it for the Turner Prize Summit of Starling Dodd with Installation, Great Borne in the background

We headed off for Great Borne and decided to stop for a bite to eat and a brew, we stopped just off the summit and found a place out of the wind. It wasn’t until we’d been there five or so minutes that we both realised how cold it was, so on went the windproof tops, gloves and woolly hat, (and this is June!!) I remembered when Jim said he wished he’d put his long johns on, that the MWIS site had said highest temperature 3 degrees. They were right it was bl***y freezing, especially in the wind.
We didn’t tarry too long for food and set off heading for the Summit of Great Borne only to find some kind person had fenced off the direct line. Climb over or go round? We went round it wasn’t that far!

We knew we were on the Summit when the trig point appeared and we just had time to take this photograph, when a head appeared from the South, quickly followed by an entire tribe of 20 or so Southerners of all ages. Jim and I beat a hasty retreat on a bearing for Mosedale. Me with hat! Told you it was cold! Hen Comb (l) and Mellbreak (r) we’d wondered what they would look like - see previous report.)

Our next sight on this so far fairly ordinary walk, was that of Floutern Tarn, an uninspiring tarn compared to others in the Lakes, so I took a photo to save you the bother of going to find it! We made it down into Mosedale (yet another of that name) and concurred with AW that it was extremely boggy, it hadn’t changed since our trip up Mellbreak and we splashed our way across it. Mosedale with Jim, Lassie, Mellbreak and Grasmoor in the distance

We were approaching the col that would drop us back towards Scale Force when I noticed a huge hole in the ground and an equally huge bit of rock next to it. As we looked up you could clearly see where the rock had come from and the distance it had travelled. Just glad I wasn’t there when it arrived at the path we were on. Big rock and its path downhill!

The weather kept fine and we passed Scale Force again, by now it was getting busy, I gave directions to a bloke with his family (they seemed to be enjoying themselves!) on where to go, they were well off the path! and as if to prove it was a Bank Holiday encountered four Japanese taking photographs near a tree, it occurred that they too might be seeking a Turner Prize as I was baffled as to the reason or subject of their photos.
Buttermere was thronging with visitors so we didn’t bother stopping for a beer and beat a hasty retreat for the car which had now been joined by thirty others stretching back towards Newlands Hause. Two more bagged, Jim getting better and we didn’t’ get wet!
Trip 2A fortnight later and it was the stray Northern Fells with Mick, a jumble of mini hills to complete the book. Dodd, Binsey, Longlands Fell and Brae Fell. Once again the weather held off but it still wasn’t great.
So here’s the plan or should I say plans! Dodd then Binsey and the final two.

our_route.gpx Open full screen  NB: Walkhighlands is not responsible for the accuracy of gpx files in users posts
Parked in the NT Car Park off the A591 and followed the signs for Dodd Summit. AW’s route shows the hill covered in trees but Dodd seems to have gone bald in the fifty years since he wrote it. The path up was well made and travelling without rucksacks made for a brisk ascent, once I’d got us going the right way, which turned out to be the longest way, it’s too complicated to explain!! The Path up Dodd 1 The path up Dodd 2

You can do this hill in trainers or probably high heels if you’re so inclined, as the path was that good. As we reached the bald patch on top, the views to Derwentwater opened up and the cloud lifted. The round trip took about two hours with diversions and Dodd is a great little hill for views of the rest of the Lakes barring Northern fells. At the car the Car Park was filling nicely so we had a brew and set off for Binsey.
If Dodd was easy then Binsey was easier and again rucksackless (it’s my word!) we strolled up the grass path to the summit trig point where we met another guy who said ‘Bagging Wainwrights?’ we agreed, took a few photos and trotted off back to the car. Mick with rucksack under T-shirt!

I liked Binsey and on a really good day the view over to Scotland would be great.
The final stop was Longlands where we parked at the beck and went through a clearly signed gate as the first part of the route took us up the Cumbria Way. We walked to the bottom of the ridge to Longlands Fell and turned right across grass till we joined the path, it was then just a steady climb to the summit. AW says ‘anybody who cannot manage this short and simple climb is advised to give up the idea of being a fellwalker’ (Northern Fells 1962), bit late for us then. I thought Mick struggled, as he had to carry a rucksack on his back as well as his front! Ben Nevis in September is planned and Mick is training hard, so am I!
The summit was a small cairn and we didn’t hang around setting off for Brae Fell As you can see the walking is not difficult and the ground wasn’t particularly wet, we’d seen a small group some way ahead of us but they had disappeared by the time we reached the summit of Brae Fell and we had the whole area to ourselves. It was also nice to see High Pike and Great Sca Fell as we’d done these in miserable, windy clag in July 2011 (so nothing changes in the weather!!), Brae Fell completed the Northern Fells and very good they were too. A lot quieter, except for Skiddaw and Blencathra, than other areas and feel different too! Try them, preferably in the dry weather, but you may have to wait a long time!! Me on Brae Fell, the last Northern Fell.

Last trip will have to be a separate report. See Part 2

Great stuff Dave, I think that art installation is far too good for the Turner Prize

Smashing couple of reports...Lucky for you Mick won't read it and I would never tell tales...Till next time....jim