Wainwrights included on this walk: Loughrigg Fell, Silver How


Trip 3
You may have realised by this time that we haven’t had the best Summer again and this final short trip undertaken solo on the first day in July, seems to prove my point.
Grasmere was the target to climb Silver How and Loughrigg Fell and try out the new boots.

Arriving at 08:30hrs the rain was gently falling, Grasmere was full of cars, but not yet people and the ticket machine in the Car Park was out of order (joy!!).

our_route.gpx Open full screen  NB: Walkhighlands is not responsible for the accuracy of gpx files in users posts
Despite the rain it felt warm so I just put on the ‘waterproofish’ (my word again!) perhaps I should have bought a new jacket too, over the baselayer and set off from the Car Park, in the wrong direction. I quickly realised my mistake and consulted the map, I’d read it wrong in the first place so why would this time be any better? The path to Allan Bank & Silver How was clearly signposted from the village, good job too, so in the drizzle I set off. Further up the path, not easy to miss!

I’d planned to bring the dearly beloved with me to test her knee after an arthroscopy, but she took one look at the weather forecast and declined my kind offer, good decision as it turned out.
Once off the tarmacked road and on to the hill every step was a splash so the boots got a good Lakeland christening. The views on the way up were better than expected and here are a couple 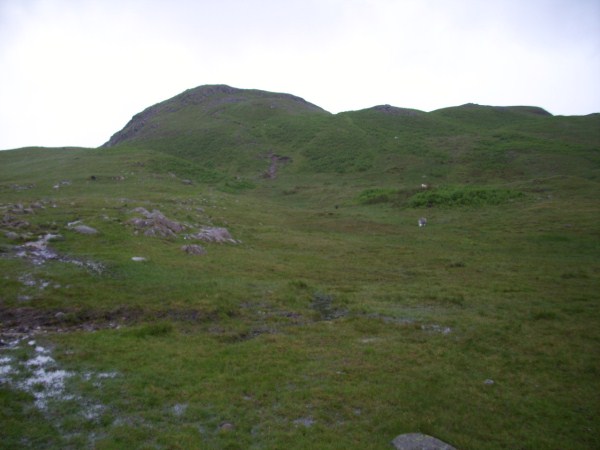 Silver How was reached and passed over without even a photo of the cairn. View from the summit 1 View from the Summit 2 The way to Loughrigg Fell

Strangely enough the way was clear and there was an obvious ridge path towards Loughrigg Fell so I followed it. From the ridge you could see down into Langdale and I heard the church bells ringing calling the followers to worship, us true followers were of course worshipping from the collected sayings of AW and getting a good soaking in true penitent fashion. Nevertheless I did manage to find one of my mate Jim’s sayings ‘a lake with grass’, and here it is. A lake with Grass 1 The clear path went onwards and downwards with Loughrigg Fell getting ever closer and me getting ever wetter! But, I was in good spirits and soon found the that my navigational problems were at an end as the signposts were excellent and somebody had kindly built a set of stairs to ascend the lofty heights of Loughrigg Fell (1099ft). It was nice being under the clag, except the contents of which were hitting my head with a constant monotonous drip. A puff and a pant and a ‘Ben Nevis’ mantra being muttered and the summit trig point was achieved. This would be a great viewpoint on a warm, bright English summer’s day epitomising all that is wonderful about the Lake District, Wordsworth, Beatrix Potter etc., etc. The Trig Point and Grasmere beyond

I chatted to three sets of other hardy souls on my way up and they were of a like mind about the weather, just do it anyway! Not a day for hanging around so I headed back for Grasmere, stopping for a well earned bite and brew in a lovely woody bit before heading down the road and back to the car. The Car park had filled up and there was consternation afoot as the paying machine was still out of order, still, most folk took a photo of the machine (just in case) and I was well pleased not to have a ticket on the windscreen. The boots had done well and hopefully I’ll get another four years out of them as I did the last pair. I’d had an idea to go and have another crack at Raven Crag, but the weather prevailed so I headed for home.
Next trip is to Borrowdale in mid-July, hope it’s stopped raining by then!

I like the lake with grass shots, well done on keeping the spirits up even in that dreary lot

Sorry I missed it now.......A good read and photos not bad considering dull weather...Looking forward to next walk.......jim