Day 2 of my 5 day annual backpacking trip to Scotland, with year's entitled 'A tour around Corrour' - and before any one points out it doesn't rhyme - I know - but it does have a certain style about it when written.

Thought for the day - taking a moment to consider the unfortunate position of the Unros - the tops that are too big to be Corbetts and too close to a bigger sibling to be a Munro.

The day started off with light rain and a cloud base at around 800m. Having stayed at the Loch Ossian SYH at the end of Day 1 I didn't rush to get away and by the time I set off the rain had stopped. 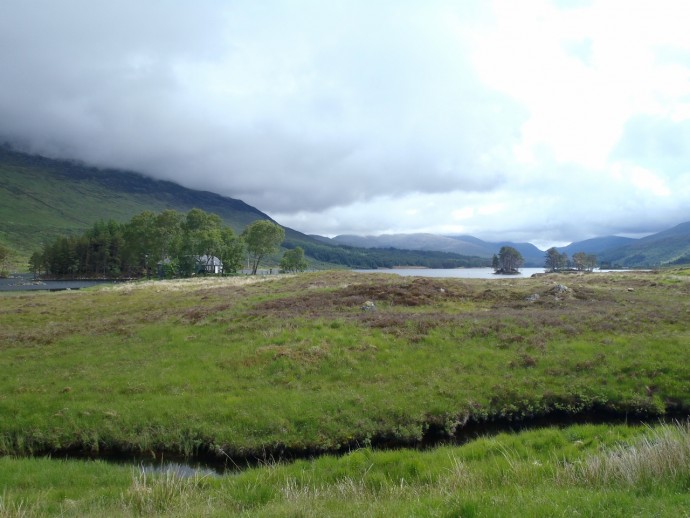 The plan for the day was to walk over Chno Dearg and then drop down into the Allt Feith Thuill.


2012_Corrour_act_abr_D2_LochOssian_ChnoDearg_16k.gpx Open full screen  NB: Walkhighlands is not responsible for the accuracy of gpx files in users posts

As for Day 1 the Road to the Isles was the start for the day, although give the work that has been done on this section in turning it into a reasonable track for vehicles I think Motorway to the Isles may be a more modern interpretation. Then again as I opted out of taking the path that runs in the same direction but the other side of the West Highland line (very wet and boggy) I don't think I'm in a position to complain about having dry feet and an easy walk

As the track went under the bridge of the West Highland line I headed up to Sron na Garbh-bheinne which is the outlier at the end of the ridge that would lead me up, eventually, to Chno Dearg. The cloud base had lifted slightly and it looked as though the day was improving. Road to the Isles and Black Water

Something I had seen from below was what looked like a line of cairns up the ridge, but on arrival were these spectacular blocks of stone balanced on outcrops. My guess is glacial deposits but I don't know the geological term for them. Once up to a height of about 750m this became a very easy ridge and Garbh-bheinn (857m) was reached and marked with a short break. Then as I headed for Meall Garbh (976m) the cloud came inm bringing light rain and reduced visibility so time for a bit of map and compass to keep me right.

It was Meall Garbh that brought on the thought for the day - here was a top that was higher than yesterday's summit, Carn Dearg, by some 35m but as it has the unfortunate accident of positioning and no significant descent between it and Chno Dearg it gets no classification - too high for a Corbett, too close to a bigger sibling to be a Munro. It's a tough life being an Unro (high enough to be a Munro, but not meeting the rules).

After Meall Garbh and almost to add insult to injury to the 'Unro', the cloud lifted as I ascended Chno Dearg. The summit of Chno Dearg was made spectacular by it being out of cloud and in sunshine, but with lower cloud bases all around. Having seen that the baggers route seemed to descend very steeply into the corrie overlooked by Meall Garbh I decided to head north east and drop down to the Corrour estate road. As ever, what looks like a sensible option on the map changes when on the ground you find out how rough, wet and boggy it really is. I was starting to wonder whether I had made the right decision but then the view from Beinn na Lap back to the baggers path the next day did make me feel some what better. Mine was rough and reasonably difficult, but not a v. steep descent on what looked to be fairly loose ground. When you are carrying a pack these things make all the difference!

Once at the estate road, I looked back and decided it didn't look too bad... Corrour Estate is an excellently remote and wild place and with Ben Alder and the Ardverikie Forest as places begging to be visited I think I'm going to be coming back. Anyway, time to turn south west as I had an appointment with a train in Fort William at the end of the week so heading further east wasn't an option.

The evening and night was spent on a very pleasant pitch in the shadow of Meall Garbh and Chno Dearg. 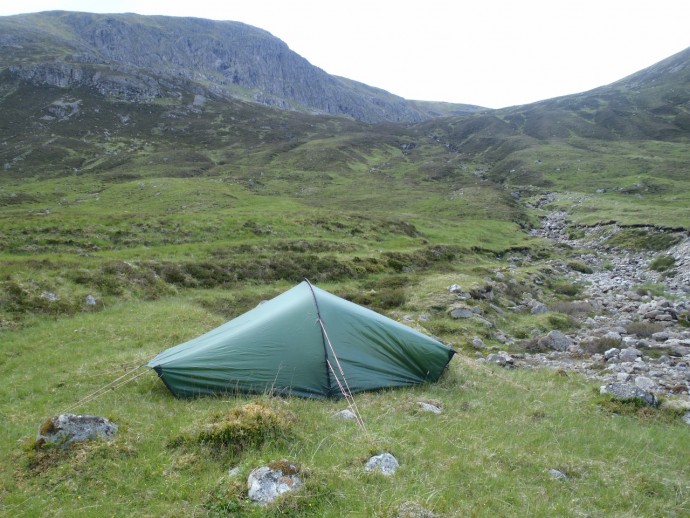 Interestingly, in the middle of the Corrour Estate with plenty of evidence of deer but only one sighting of a single solitary female high up on Beinn na Lap.

Another great day in what was turning into a very good week.

If you are interested the tour continues with Day 3 which can be found here.