Todays walk follows a 4 week break from the fells including too much partying and 4 days in bed with a horrible virus. Yes !! I am making excuses already as I found this walk a lot more hard work than I probably should have done.

Damson & I set off from a small parking bay just south of the Ravenstone Hotel (just past Dodd Wood car park) and crossed the road to go straight up the Bridleway Path behind the hotel and up towards the Edge.

Bassenthwaite panorama from ascent up to The Edge from Ravenstone Hotel 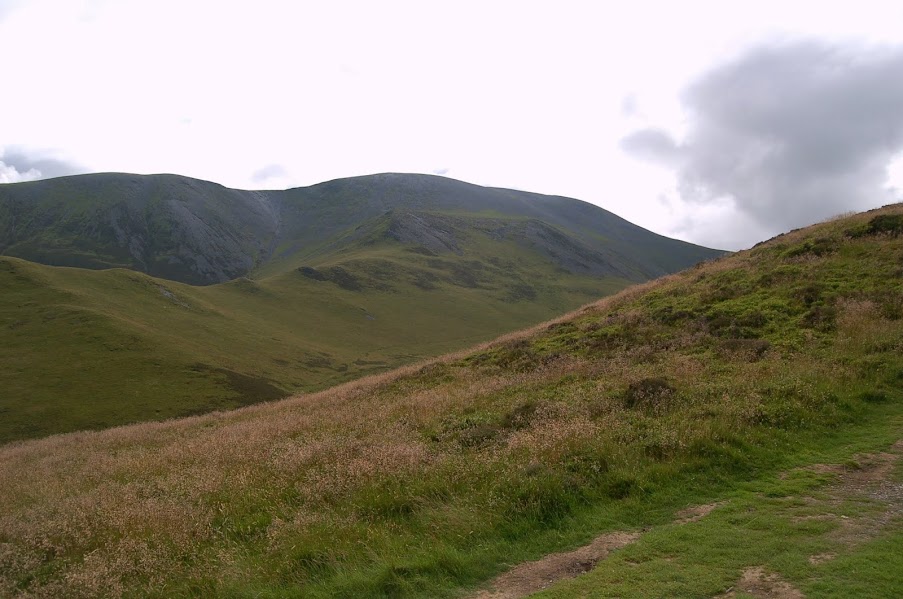 Skiddaw from Ling How at the bottom reaches of the Edge

On reaching Ling How we hooked right and started the steepish climb over Kiln Pots and up the Edge to Ullock Pike, Long Side and Carl Side. Proceeded by a young lad with his parents who pretty much danced over each climb made me realise that I wasn't going to keep up with him and decided that a few more rests than normal were going to be required today.
With a pack full of wet weather and winter gear that I was never going to wear, I wished I'd taken the easy option and lessened the weight today, but felt I had to prepare for the wild camping trip around Buttermere that I have planned for later this summer (if we actually get a summer

Skiddaw & Long Side from Ullock Pike 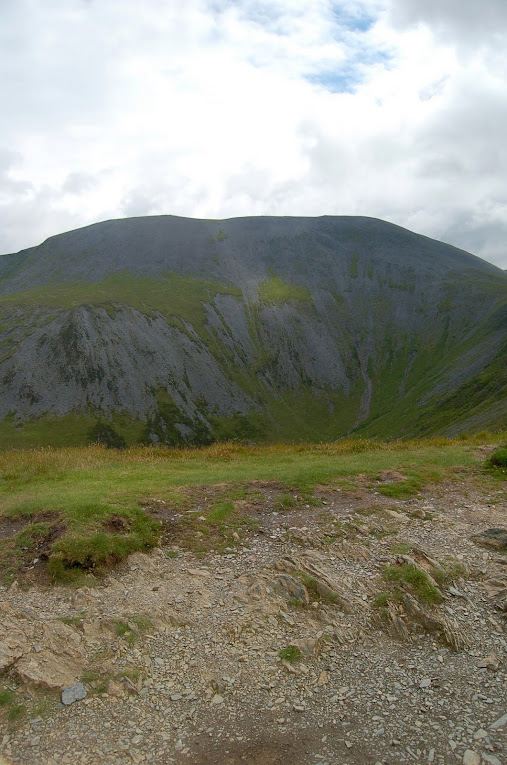 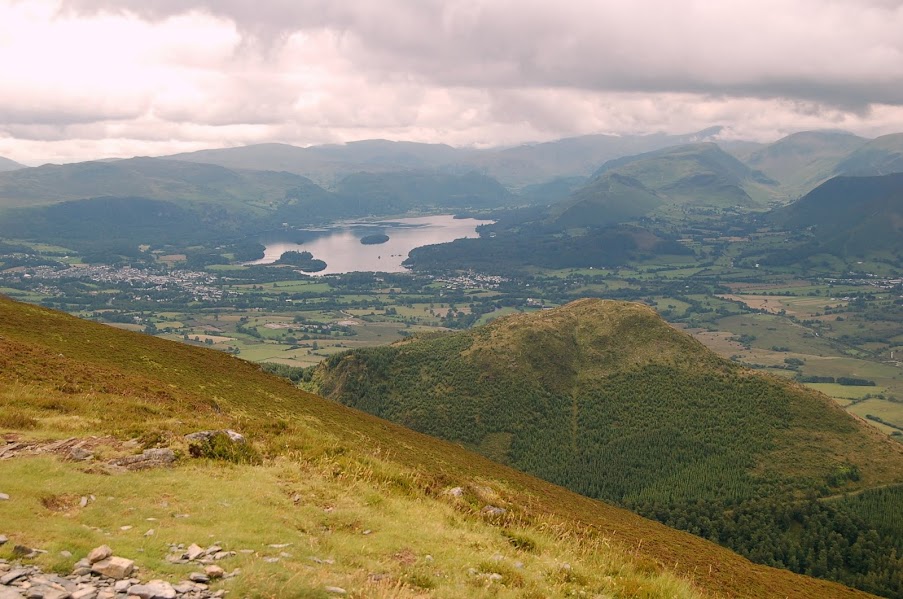 Derwent Water and Keswick over Dodd from Ullock Pike

The views as usual got better as we climbed with excellent views over to the North Western fells and Skiddaw looming over us. 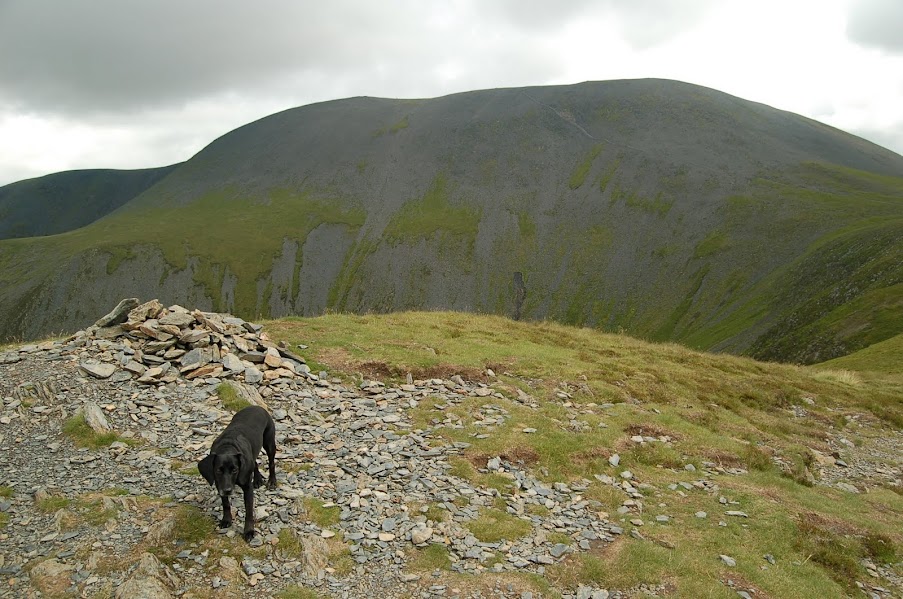 Skiddaw from Long Side 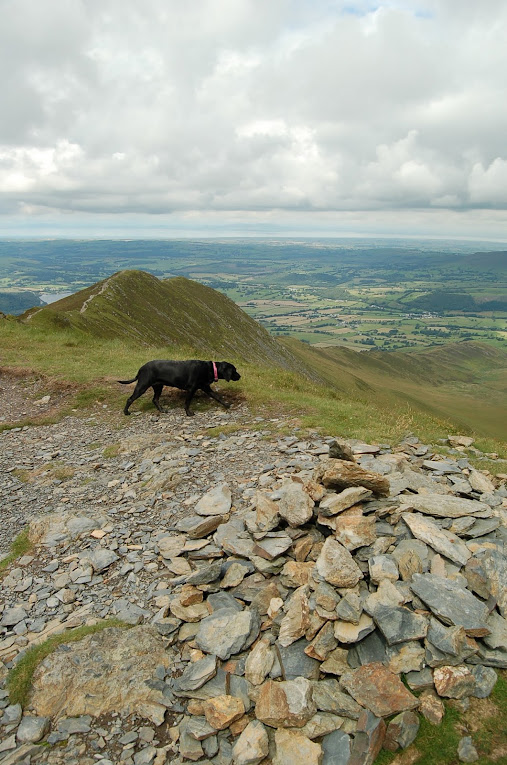 Ullock Pike and the Edge from Long Side

Derwent Water and the North Western Fells from Long Side 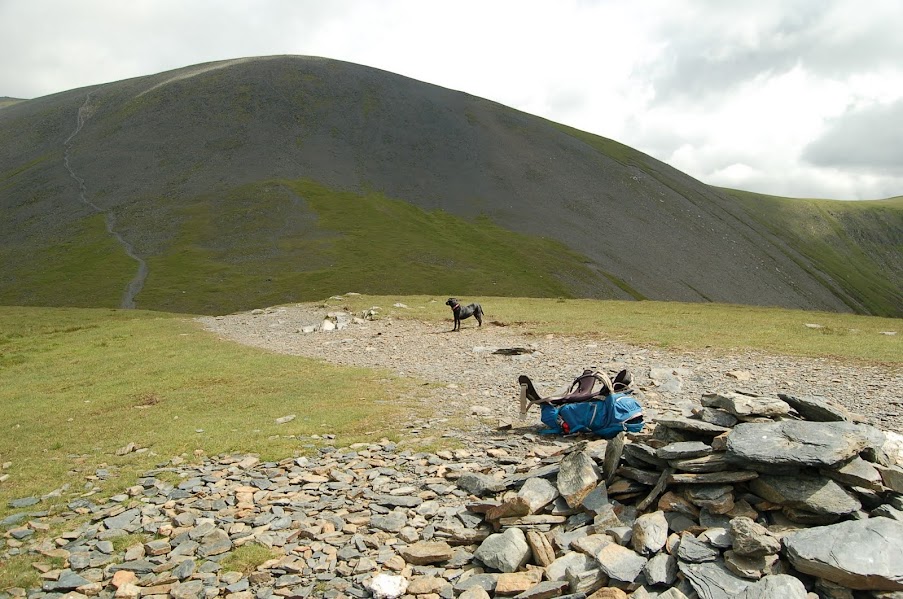 Carl Side summit looking to Allerdale Ramble up Skiddaw 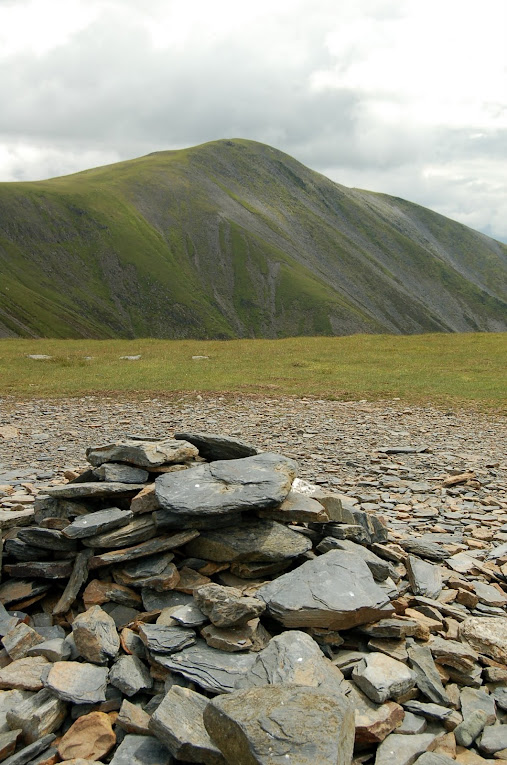 From the top of the Edge terminating at Carl Side summit we headed left and the climb up to Skiddaw summit. The map makes reference to this being called Allerdale Ramble. It is a path evolved up the scree from a sheep track and is quite a slog, especially the upper section which gets quite steep for a small section before rounding off to join the summit ridge and a small walk left to the summit Trig Point, shelter and a small pillar containing a Wainwright style surrounding Summit reference inscribed on a metal plaque / disc. 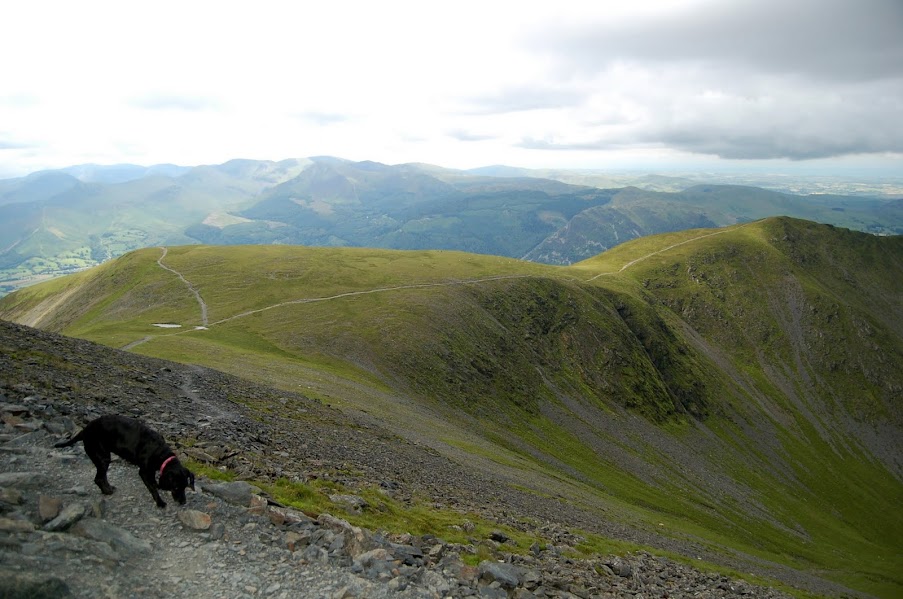 Carl Side and Long Side from Allerdale Ramble 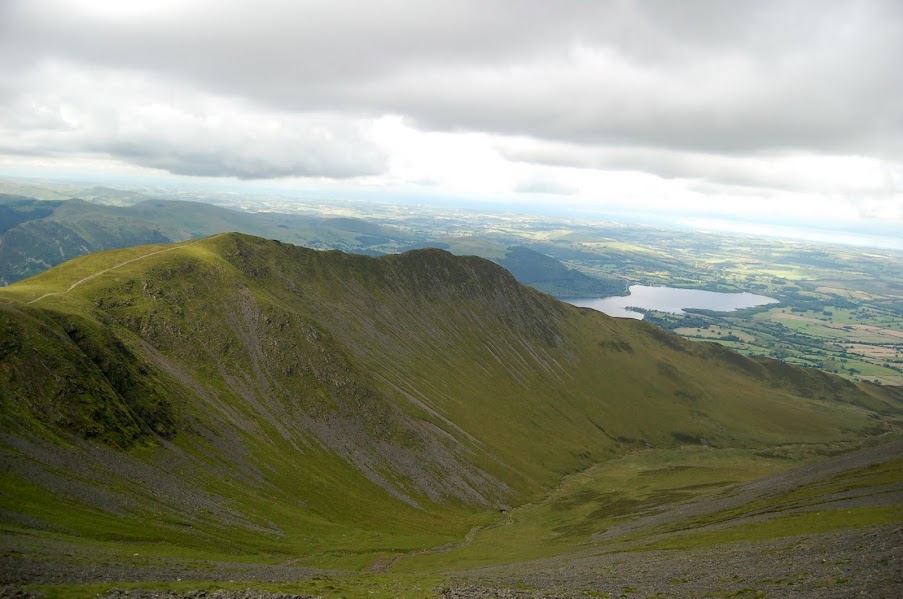 Long Side, Ullock Pike & the Edge from Allerdale Ramble 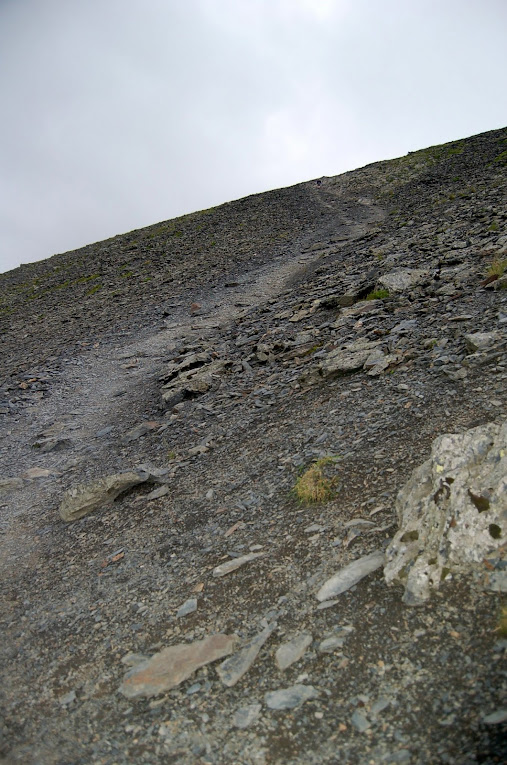 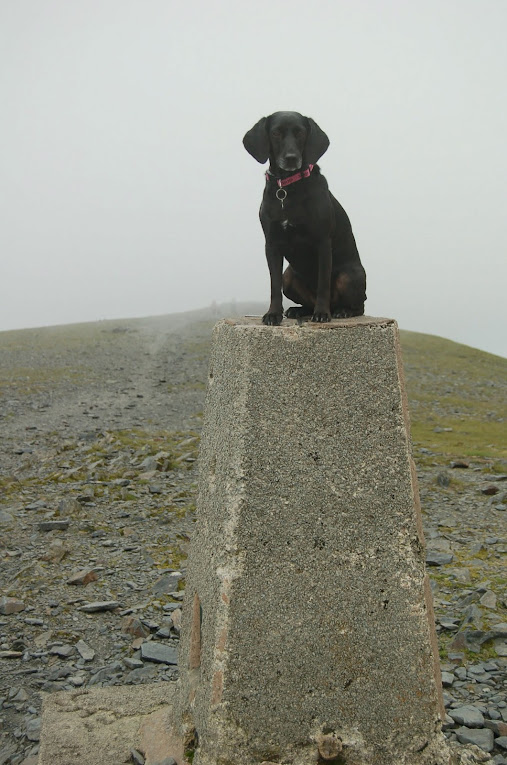 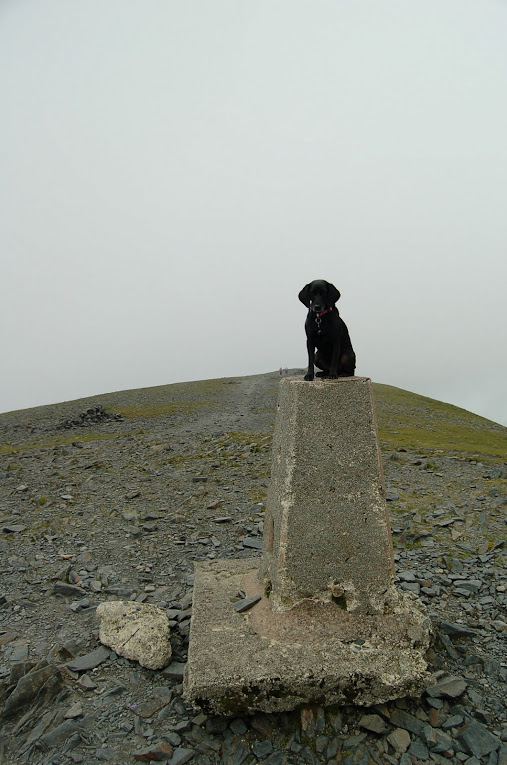 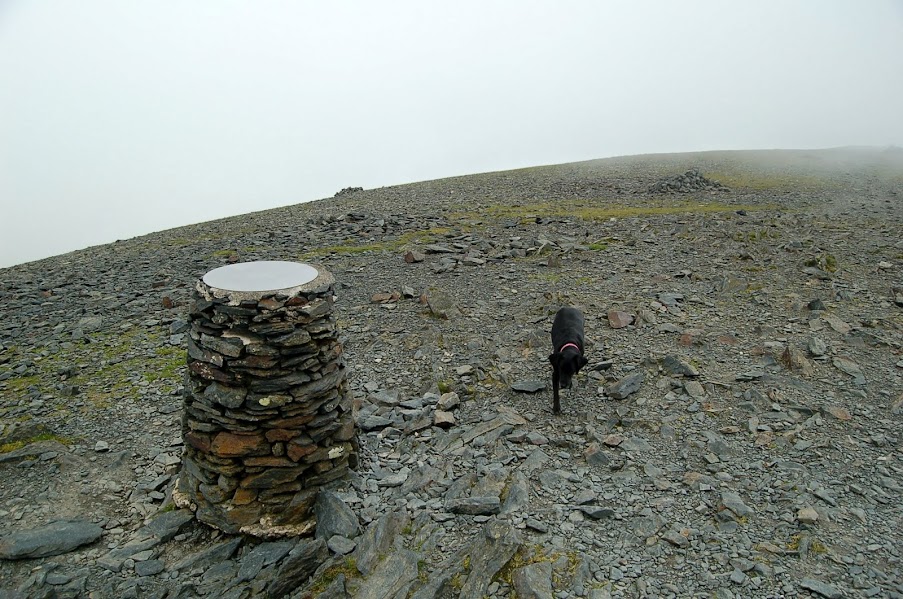 Plaque on top of Skiddaw Summit

The cloud had descended slightly as we reached the top so for a short period the views down into the valleys were slightly obscured. Bad timing unfortunately as it cleared again on our descent to Skiddaw Little Man. 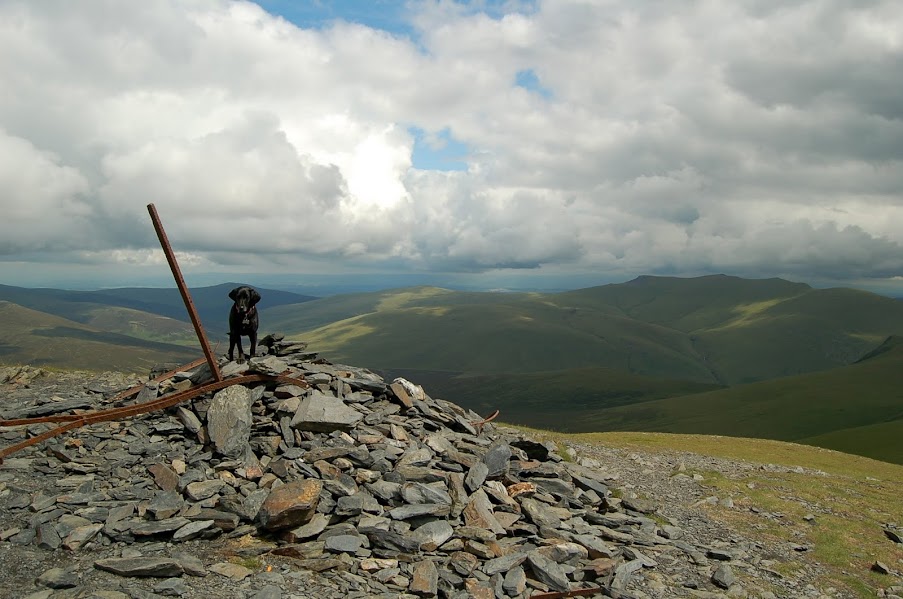 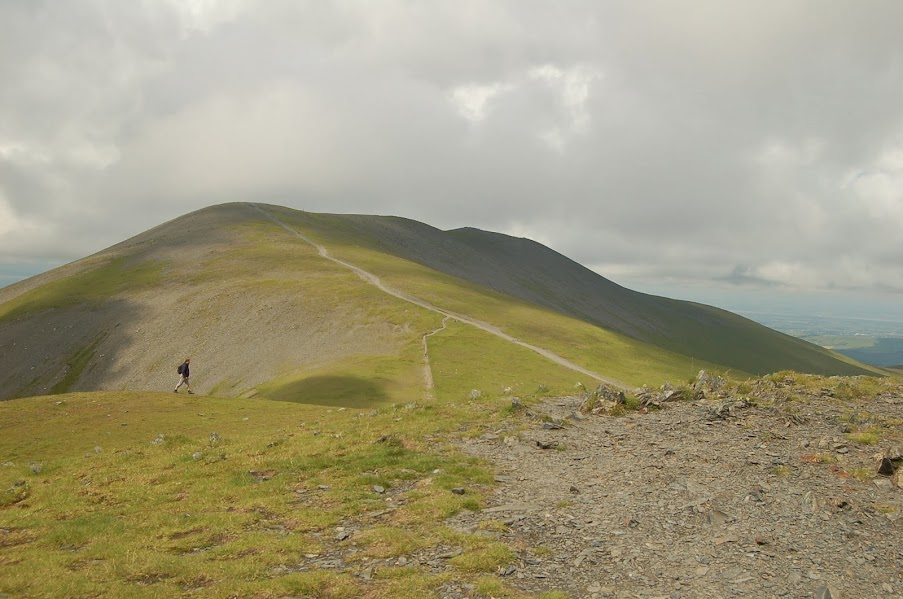 View back to Skiddaw from Skiddaw Little Man 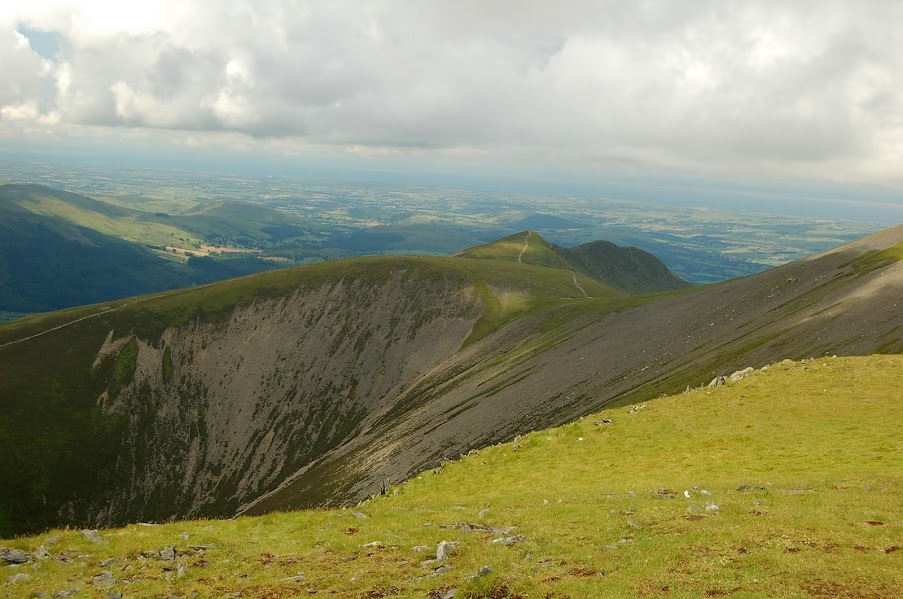 Carl Side, Long Side & Ullock Pike from Skiddaw Little Man

Next and final fell for today was a couple of km to our east and reached by taking the easy path off Little Man down to the head of the fence from the main path and carrying straight over on to slightly boggier land, following the fence line all the way to the summit of Lonscale Fell. 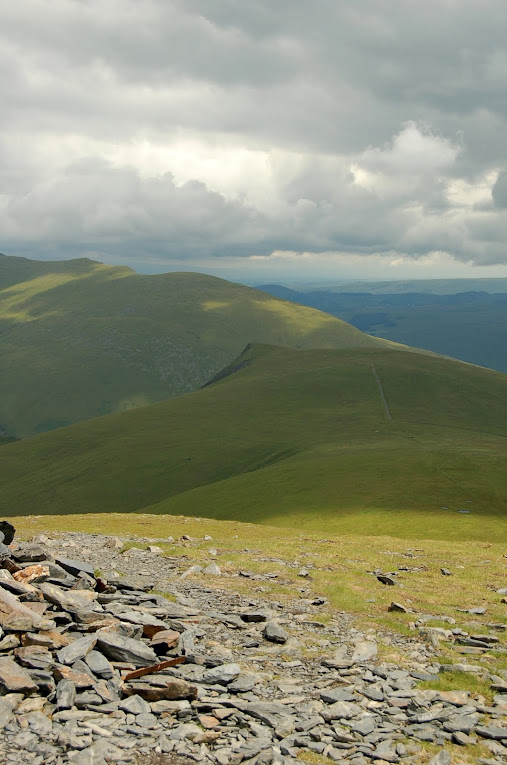 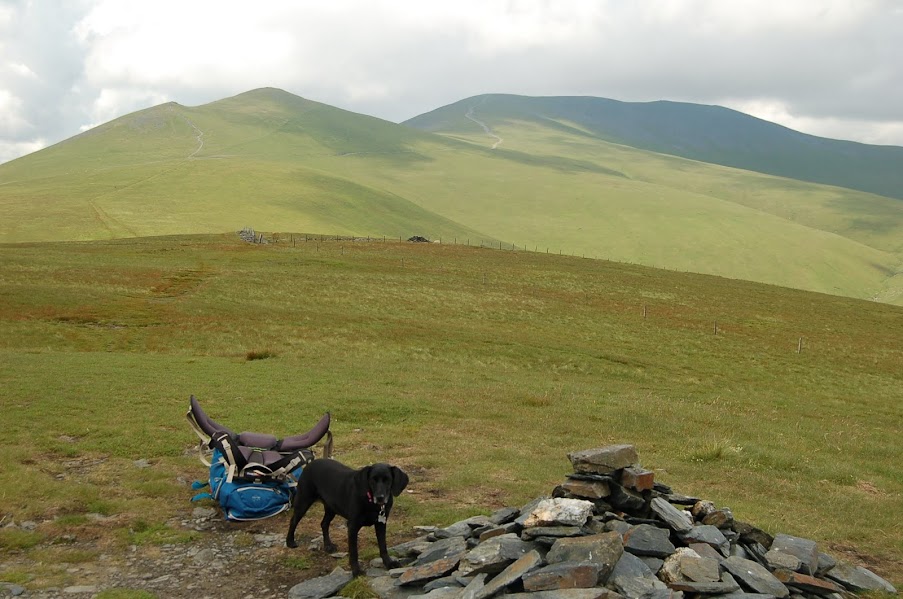 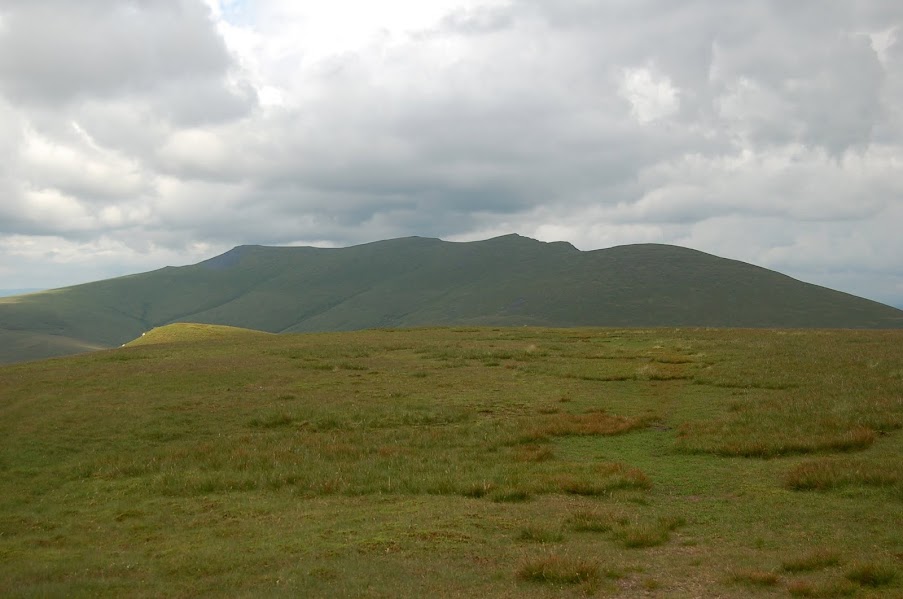 Last decision of the day was how to get back to the car. Either back over the tops 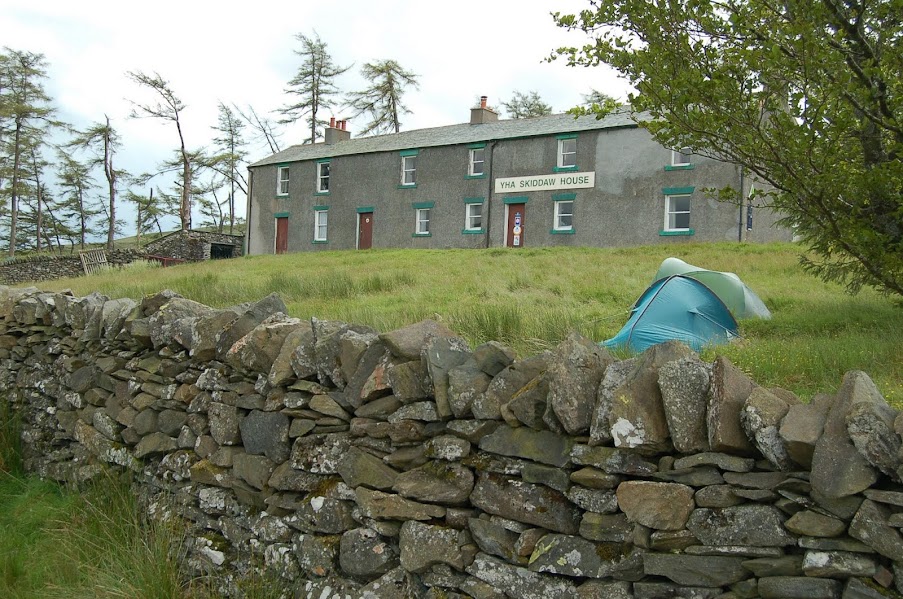 Views back to Skiddaw and Lonscale Fell were captured along the Cumbrian Way and a few more from the top of Whitewater Dash (waterfall) looking over Dead Crags and out towards Binsey. 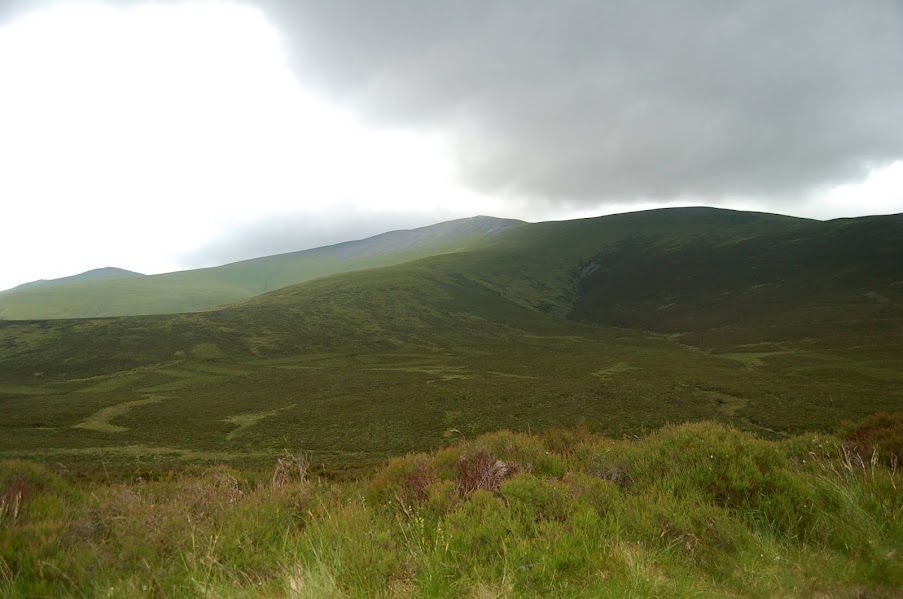 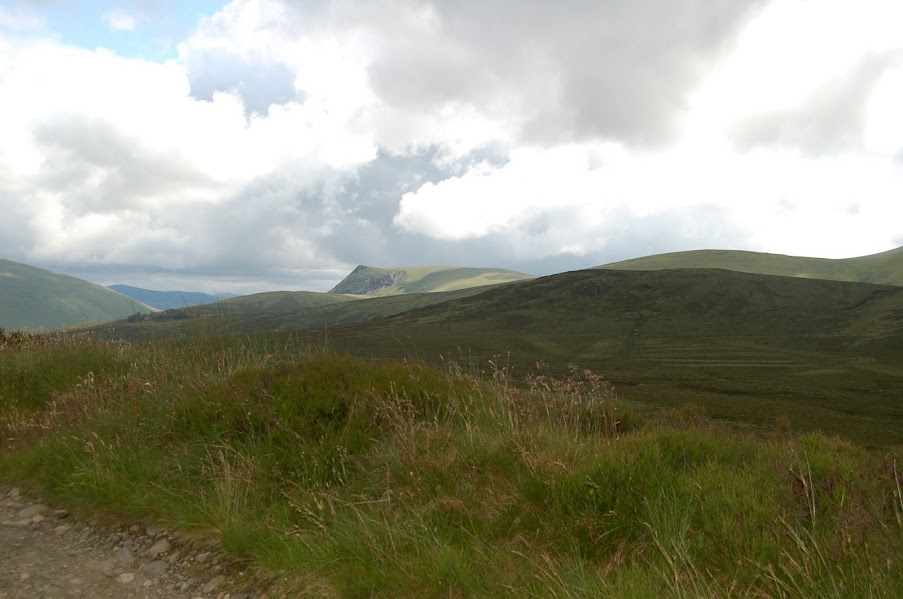 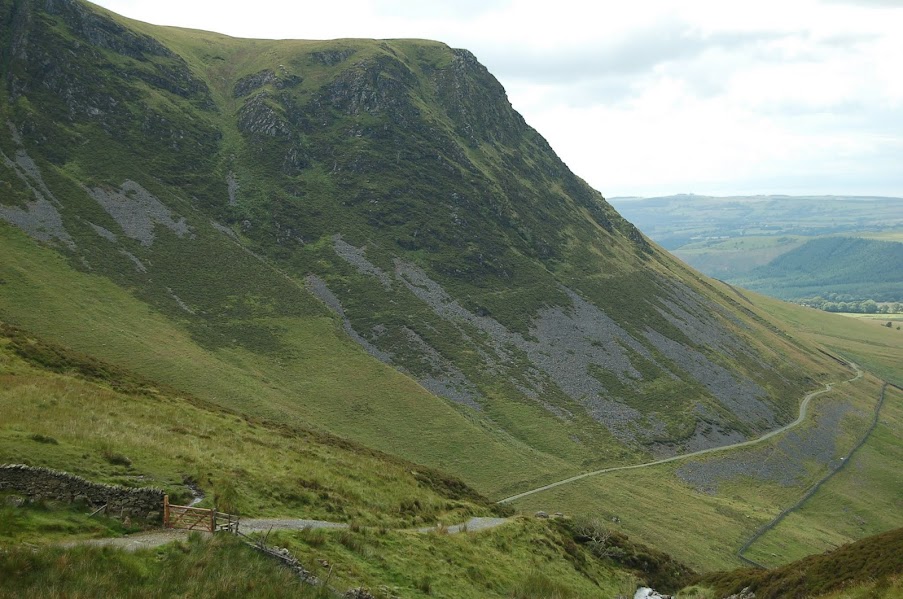 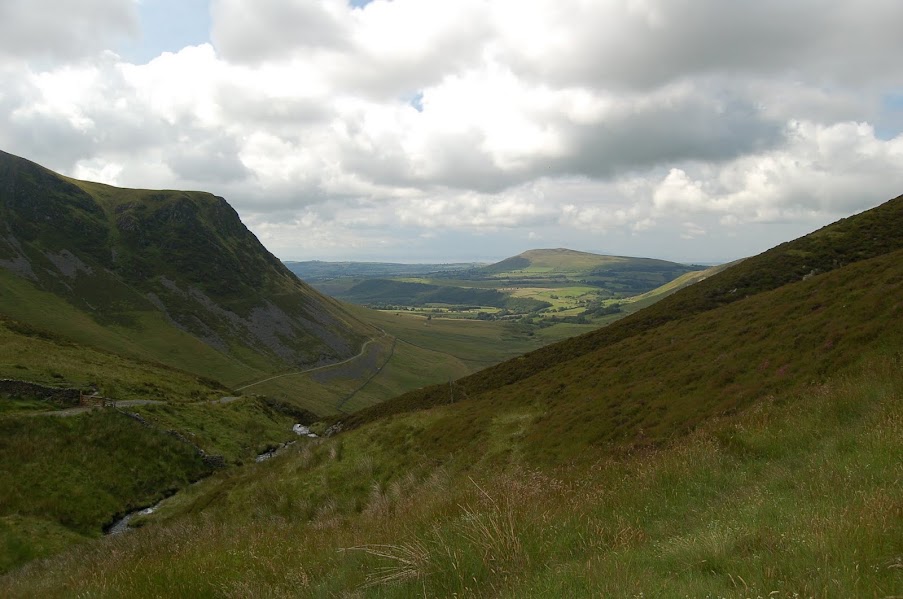 View to Binsey down Dead Beck

A long trek back down the country roads, eventually led me back to the hotel and the car but this was not without incident. After yomping for 7 hours and over 22 km, I was 10 metres away from the car when somebody in a blue BMW tried to take me out. With no pavement, we were tucked into the side of the road when this stupid motorist flew past me and smacked into my wrist with their wing mirror. They slowed down further up the road, probably due to the loud bang as the collision ripped off their wing mirror and then sped away. Fortunately neither me nor Damson was hurt, just shocked, and I apologise for the language that a few hotel customers may have heard.

A truly great walk with everything Lakeland has to offer thrown in bar a knife edge.

Great stuff Phooooey, good to see you and Damson back out in the hills, beautiful views from this one on what looks like a reasonable weather day...at last. The thing with the BMW kind of takes the gloss off, I'll bet the driver slowed to decide if you had got his number or not before driving off, what an absolute *insert expletive here*

Glad you were not seriously hurt as it would appear the person has little conscience.

What a ******* that BMW driver was; so glad you and Damson weren't seriously hurt, Craig

Love the ones of Damson on top of Skiddaw