Share your personal walking route experiences in Scotland, and comment on other peoples' reports.
Warning Please note that hillwalking when there is snow lying requires an ice-axe, crampons and the knowledge, experience and skill to use them correctly. Summer routes may not be viable or appropriate in winter. See winter information on our skills and safety pages for more information.
Post a reply
43 posts • Page 1 of 3 • 1, 2, 3


They say revenge is sweet,let me tell you something,revenge never tasted so good.Three years and three failed attempts, it was getting to the stage where I was wondering if this one would always slip away.I had been keeping in touch with Bod,Val & Gavin in the last few weeks and we had set a date that would finish of Bod & Val"s summer holidays.But even in the week running up to Saturday it looked like my Kintail & South Ridge jinx had struck once again,my Mrs had once again taken ill and was now back in hospital

, then I was struck down with D&V and ended up in bed all day Wednesday,so me in bed,Mrs in hospital not looking good at this stage.However by Thurs night Elizabeth was much better I was so,so but still thinking this wont happen,but Elizabeth kept saying,look get yourself up there and get this done,so that made my mind up.
Saturday morning had me parked up at the bottom of the ridge waiting for the others to arrive,plan was leave my car here and take Bod"s car to the Cluanie,everything went smooth as a nut and soon Me,Bod,Val & Gavin were all ready for the off,the conversation then went something like this.....ME...."tell you what Bod,best if I put my car keys in your glove compartment so they dont get lost"

and of we set everyone looking forward to this one,all chating away,weather looking set fair for the day 3 idiots & 1 idiot behind the camera

.Now you would think one of us would work out this wont work........but no.......well someone did eventually work it out 7km into the walk & half way up Creag a"Mhaim,ME

then all of us

ach never mind no point in someone walking back we can worry about how we get back later,and so summit (no 1) .We had a 10/15min break here and started to work out how to get back to the Cluanie,1st plan me,bod,gav all hide & val stands and thumbs a lift,2nd phone a taxi,3rd bod/val phone a friend,4th we walk...........but more of this later,bags back on and head for munro no2,nice easy stroll along the ridge with the cloud cover burning of all the time. Bod heading for no2

.35min later and we are all on the summit of Druim Shionnach .No stopping here apart from a wee pic stop,and off to no3,by this time the cloud had burned of giving fine views in front. all still going strong at this stage and soon summit no3 is in the bag. .We took another 10/15 min food stop on this one and met up with 2 other walkers and explained our wee problem,but they were in the same boat,so no help here,bags back on,all still in high spirits heading for no4,well all apart from Val,by this time plan no1 Val thumbing a lift,had grown arms & legs,she now was going to unzip the bottom of her trousers and flash a leg(this would work)Val not so sure.Not sure why,but I found it a real slog between 3 & 4,with the others opening up a wee gap as we walked My comrades dropping of the ridge

and the 4th munro looked like a fair distance away with the tell tale signs of lactic starting to build up in the legs. MCD still a fair distance away 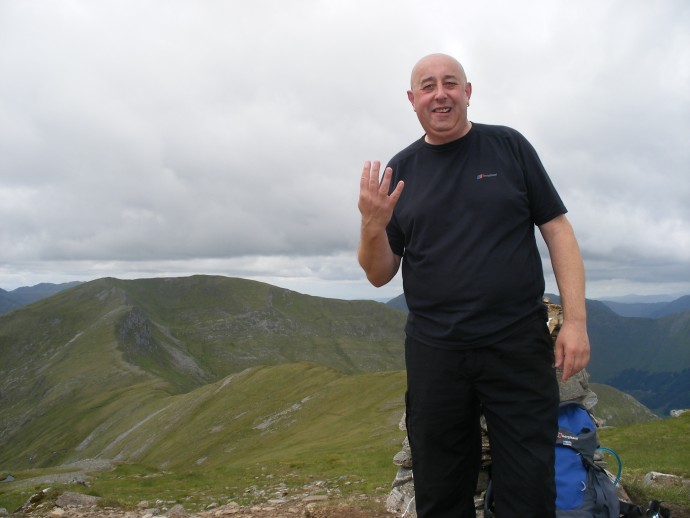 .Another wee break for pics/food here and of and running heading for no5,all the time the views front & back were fine. .The break here did me the world of good,jelly babies,sports mixtures,toffees,lucozade sport & now my legs have wings

and the views help also,the walk from 4 to 5 for me was the best of the day,feeling better,banter great,weather stunning & best of all,I now know this ridge is all but,for any unforseen circumstance nearly done,its a great feeling,and in know time no5 is done. and then the day that started as a farce all came together in the space of 2mins,as we dropped of SaDL we met alone walker heading the other way at a fine speed,but he stopped to exchange hello"s,and then said to Bod I know you,then to me I know you,and then the same to Val,it turns out to be Rocket Ron"s best mate Garry Wilkinson who uses this site and is on FB,so we explain or wee problem,no worries he say"s,my van is parked at the walk end & my bike is at the Cluanie so I will give you a lift back when your finished

.The walk to no6 never tasted so sweet. .A long break was taken here,more jelly babies,sports mixtures,toffees & food,water,then bags back on for the last ridge walk of the day .We all agree its a slog to the last one,weary legs now taking its toll on everyone of us,but a great sense of achievement for us all. .Never ever have I had a feeling such as this,tons of emotions running through my head,finally nailed my nemiss after 3 years & 3 attempts,my thanks must go to Bod,Val & Gavin without you this would never have been possible,thanks to everyone of you again,I also need to thank Alan & James who were with me on my 1st failed attempt,to Alastair,Andy,Alan & James who were with me on the 2nd failed attempt,but kept me going when we ended up climbing The Saddle &Sgurr na Sgine in minging weather,thanks & last but no means least a thanks to Pauline,Graeme & Thomas who did climb the South Ridge in appalling conditions at the WH meet,the self same meet where I bailed before I even got to the meet because of the weather(how bad did I feel when I saw you had done the ridge) and I was sitting on my arse,but made me all the more determind to eventually beat my nemiss,many thanks to all GLW.

. Great job to all

Well done in finally getting these 7 done. I'm sure it was worth it. The old saying goes " if at first you don't succeed" I'm sure you all know the rest.

Aye, well done.. what an epic day out!

and by the looks of things, you got a break in the rain for it

I did these when I was still too niave to know what I was letting myself in for.. had no idea what I was tagging along on, so every top I was like 'there is still more to go?'

Heard all about this walk when i bumped into Bod & Val at House of Bruar on Sunday, the key saga and how happy you were to complete the ridge so a very well done to you all on what looked like a superb day. Been there with the keys myself when my walking companion left her keys in my car when we did the Brothers ridge and i also had the misfortune of actully losing my car keys on a walk so good on Rocket Rons mate for giving you all a lift back although i'm sure the first car to see Vals legs would have stopped

This is brilliant Gammy, so good to see you out in reasonable weather again resulting in some beautiful photos. The thing with the car keys made me laugh.....you got lucky there mate

Best wishes to Elizabeth, I hope she feels better again soon....I'm sure your antics in the hills bring a smile to her face

Excellent & the 121 has a nice ring to it as well. Your weather looked good as well. I don't know what Bod & Val were doing to you but you never smile like that with me mate

Well done Gammy and the gang.We were just over the glen from you on saturday,weather turned out just fine

Also had a wee miss-hap with some car keys when we did the Glenshee 6,Left Ian's car at the end of the walk,he jumped in mine to the start of the walk,then on the top of the 5th munro he sheepishly informed us that he'd left his keys in my car

Excellent stuff. Shame I couldn't tag along, still got an empty feeling inside from abandoning this route with some of the gang after doing the first two at the Kintail meetup. No doubt the four of you will look back on this and smile for a long time.

- that's a fair old set of obstacles you had to overcome ! had planned to be up here originally as well last weekend but wanted a few days of good camping weather so changed plans - looks like you made the right decision....and as for the keys

Excellent report GLW and well done on a tough walk. Your lady is a real rock giving you the motivation to get out there. Superb

A great day out, GLW, excellent effort after you hadn't been feeling so well.

I'm due for a trip to the West Highlands so this report's a good motivator, Glen Shiel and Kintail are now high on the list of candidates for my next Scottish venture.

And the car keys? Well, as you first thought out, at least they were safe in the glove compartment

Brilliant report Gammy, so pleased you nailed them, and the break in the weather was a treat as well!

Yes, it was a brilliant day, the memories will stay with me forever. Huge thanks to everyone for making the day so special

, I'm still laughing about the keys, can't believe we all stood and watched you put them in the glove compartment and not one of us thought, wait a minute don't we need these keys at the other end?