Mum had been delivered back to Yorkshire; the in-laws had been visited in Warwickshire (twice); my daughter had been wined and dined in Oxfordshire (for the price of an overnight sofabed). All round, a hectic 48 hours.

I was grateful therefore, that the sun shone on the Lakes as I headed back north, despite a somewhat “iffy” forecast. Another couple of unvisited Wainwrights could be claimed.

Once through Staveley the lower reaches of the Kentmere valley are a delight to drive through: steeply wooded hillsides, the occasional glimpse of the meandering river, typical Lakeland slate cottages and farms and, with almost every twist of the narrow road, a different horizon is revealed.

Having parked close to the entrance to the works, just a couple of kilometres from Kentmere village itself, the walk has an inauspicious start. Cartoon character health and safety signs and yellow stripes across the yard help you navigate the lurking dangers before launching you along the path above Kentmere Tarn.

The church and the scattered cottages of the village present an idyllic chocolate-box view with Kentmere Pike in the background and absolutely no hint of the motorised visitor-strewn mayhem a valley or two to the west. May such quiet Cumbrian corners continue. 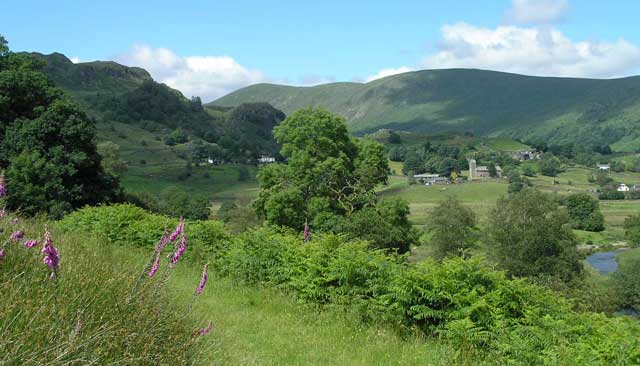 Kentmere village and Kentmere Pike behind 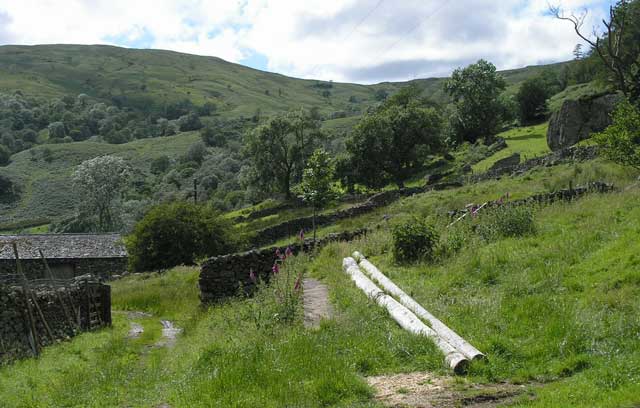 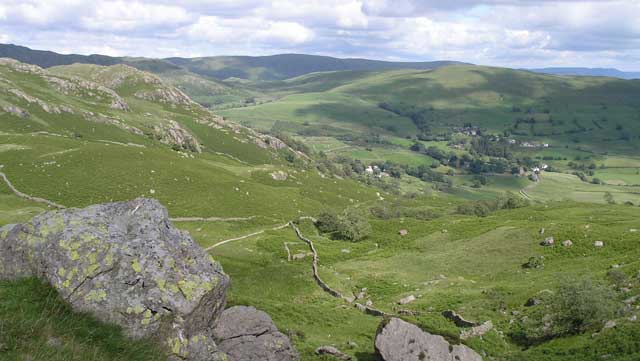 The woodland path leads to the farm at Kentmere Hall, and once above the slopes that rise behind the farm the track to the Garburn Pass is reached: the valley is soon left behind and with equal speed, and the odd zig-zag, the pass is reached. The prospect of a view down into Troutbeck encourages you to overshoot, pass through the gate and miss the stone stile that provides access to Sallows’ somewhat soggy slopes above and to the left.

Once steps have been retraced and over the wall a teeter along the remnant of an older structure helps to avoid the initial boggy stretch before some bucket steps lead directly up the hill. Within ten minutes the majestic summit cairn looms large atop what appears to be a burial mound of some sort. Actually, it’s just a dozen or so flat stones barely rising higher than the sheep-shorn short grass of quite a flat top: but it does benefit from a great view south and west. Morecombe Bay and stretches of Windermere catch the sun in one direction while Great Gable sits on the western horizon like a huge on: off button waiting to be pressed. The route round to Sour Howes offers more of the same in terms of both soggy ground and views. Pleasant, untaxing, relaxing – just what a break from the motorway needs to be. By contrast with Sallows, its top is a jumble of mounds with the occasional jagged rock breaking through to provide definition to the highest. It’s the sort of place where, given that rarity of some warm late afternoon summer sun, you could lean back and soak it all in and doze.

But no, “I have miles to go before I sleep” someone once said (that’s dragging out some O-Level English from deep inside my memory).

The descent from Sour Howes simply follows one wall then another before taking the middle of three paths towards Ullthwaite Bridge. 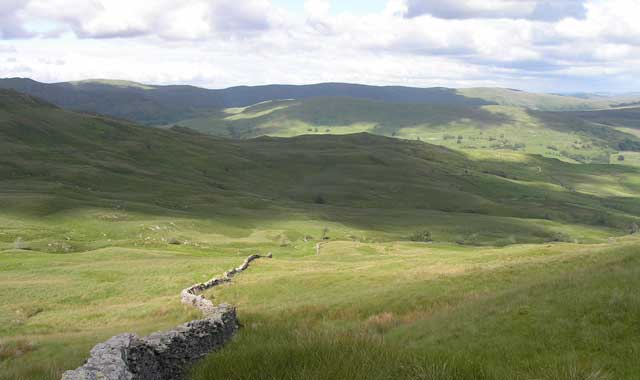 Before getting there a narrow path to the left squeezes between two old stone walls and heads for a bridge across the beck and Sawmill Cottage. The dangers of the now deserted works yard can now be tackled to return to the car having thoroughly enjoyed this quiet quarter of the Lakes.

Nice to see you managing to squeeze in a couple of the less spectacular of the Wainwrights on your way home,probably the best way to do these two in my opinion. Although neither of the summits are owt to write home about really,the views to the West & also of the Western side of the Kentmere horseshoe makes the journey a more than worthwhile one & Kentmere is a lovely little place.

Really great report OD, beautiful photos supported by the words of a man who truly appreciates the lakes. Lovely read throughout

These were the first 2 Wainwrights that I did solo, before heading on to a longer day up Yoke, Ill Bell, Froswick and Troutbeck Tongue.

I think even the less impressive Wainwrights still have something going for them, but my main memory of Sour Howes is finding several people standing around on different mounds trying to work out which bit was the summit!