Heads I win: tails you lose – Meall Glas, Sgiath Chuil and a

Heads I win: tails you lose – Meall Glas, Sgiath Chuil and a


There are some routes where you can plan to avoid the worst, do it the “right way round”, or simply be prepared.

And there are others when you just know it’s best to tackle it in the middle of the coldest winter for a decade, or the driest drought of the century.

I just knew from leaving home that I was going to get wet feet doing this. I must stop being my normal Yorkshire stingy self and get the wallet out. It doesn’t help that the stitching went on one boot at least two trips ago and the heel on the other must have collapsed as it’s been making a strange squeak with every step for ages. At least, like old slippers, they’re comfortable: even when wet.

Let’s face it, the beginning, the middle and the end of this walk are wet. There’s no perm any one or two from three on this one. The two Munros and Beinn Cheathaich in between may be dry and offer a modicum of squelch-free salvation, but the other bits just have to be endured whichever way round you go.

I chose to do Meall Glas first so went round the back of the house at Auchessan and followed the burn towards Creag nan Uan. At some stage the path kind of petered out. A sort of smudge on the hillside beyond suggested there might be a path of sorts on the opposite side, so off I went. The tale after that is about as distinct as any kind of track that might or might not exist across the slopes to the top. Suffice to say, route finding was “interesting” – even with perfect visibility – but it kept the mind occupied until the col below Meall Glas was reached – in a surprisingly quick two hours and ten minutes. Thirty minutes off the “book time” I noted: fool that I was. Ben Lui and a threatening mood below Meall Glas

The legs got stretched crossing to Beinn Cheataich and the excess water in my boots was soon squeezed out as each step was taken.

Then the drop appeared. That looks wet I thought. It was.

Conflicting advice from others on the hill then followed. Go further down the ridge and cross to the north ridge of Meall a Chrain opposite lower down – it’ll be an easier ascent was suggested. But that meant losing even more height that then had to be regained, and added much more distance.

No I resolved, JFDI. So, the brutal direct approach to Sgiath Chuil was taken, and to be honest it wasn’t that bad. But so much for slicing minutes off the “book time” on this bit. After a restful spell on Sgiath Chuil (while hoping all went well with what appeared to be a lengthy rescue by the chopper on Ben Challum) the descent, not to be out-done by the ascent, was just as bad. A stretch of path here, the vestige of something there, and every now and again the suggestion of a clear way to the Allt Riobain. But of course, it was not to be. Not until it was reached and crossed at the dam did anything remotely resembling a track remain consistent for more than a hundred metres. 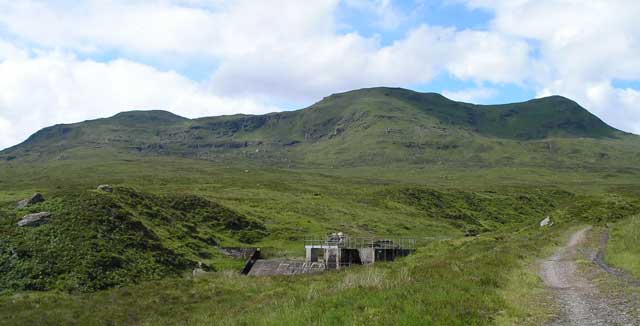 After threatening skies - the sun comes out on Meall Glas The track down the eastern side of the fenced woodland was followed with the peaty cascades of the Allt Riobain a constant companion on the left. By now the occasional knee-deep disappearance into the morasse that masqueraded as a path was inconsequential. Once you are wet, at least you can’t get any wetter – and it hadn’t even rained.

In spate this stretch of water must be spectacular given the debris lining the banks as I got further down. I’m still not sure what was holding up the plank bridge at one point, but I was grateful for the proximity of the deer fence handrail just in case. Is that a bridge I see before me?

A paddle at the bottom saw most of the mud washed off and a fresh quantity of water in the boots that was soon squeezed out on the walk back to the car. And they’re still out in the garden trying to dry out two days later.

But strangely enough, despite all that, I thoroughly enjoyed a great day out. A bizarre bunch aren’t we.

Re: Heads I win: tails you lose – Meall Glas, Sgiath Chuil a

I enjoyed reading this...it's interesting to see that even though 16 years have passed since I did these two, there's still practically no path.
Apart from maybe the Carn Bhac / Beinn Iutharn Mhor col, I found this to be the boggiest, wettest walk I've yet done. It was a soul-destroying zig-zagging plod.
It was early May when I was up there and I was being followed closely by two walkers who stayed about 100m back and stopped whenever I stopped to let them pass. I stopped this by jumping off the top of Beinn Cheathaich and managing a massive sitting glissade right to the bottom of the coire. It put me about 1/2 hour ahead of them.

Re: Heads I win: tails you lose – Meall Glas, Sgiath Chuil a

Nice report OD. Well wet was it, ha. I done these in a drought from Kenknock and there wasnt a drop of water for miles