Stuc a'Chroin via Beinn Each

Stuc a'Chroin via Beinn Each

Munros included on this walk: Stuc a' Chroin

our_route.gpx Open full screen  NB: Walkhighlands is not responsible for the accuracy of gpx files in users posts
The weather forecast was optimistic, driving from Stirling I could see lots of blue patches, strange stuff not seen for a long time and I caught sight of a fiery object in the sky when I got out the car, with some heat being generated. I had heard rumours it was summer time, was it here at last?
Parked at Ardchullardie and took right of way up past Beinn Each then climbed slope to ridge between it and Stuc a'Chroin. Went up Ben Each from the north side, much easier than the signposted route. 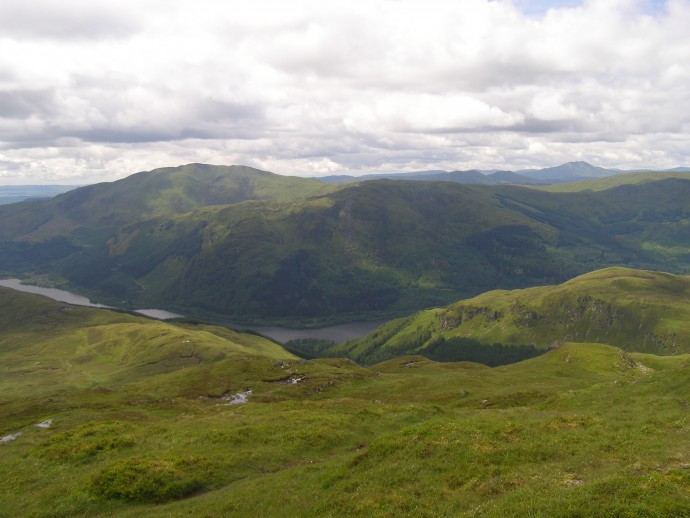 Ben Ledi and Loch Lubnaig from top of Beinn Each 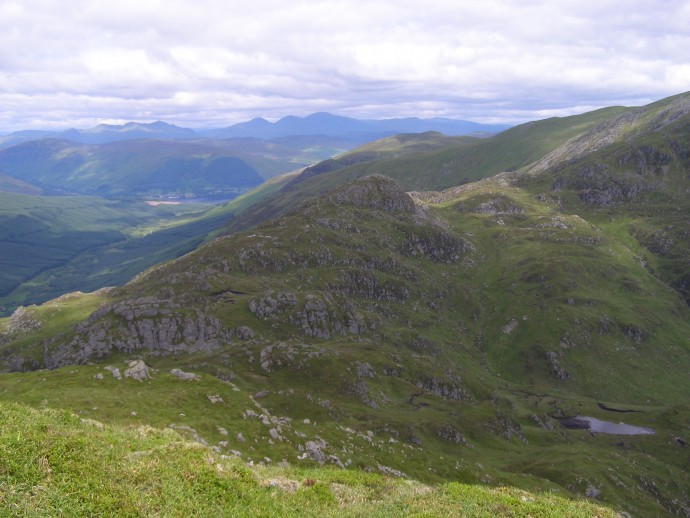 The route over to Stuc a'Chroin from Beinn Each 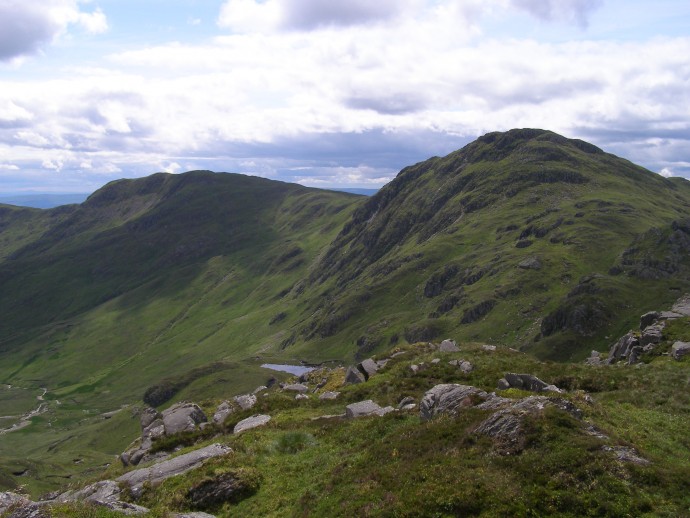 Half way over, looking back to Beinn Each

Then over to Stuc a'Chroin. The path follows a fence line most of the way, which meant up and down a lot. Like Vorlich, lots of scree near the top. Lunch and drinks while taking photos. 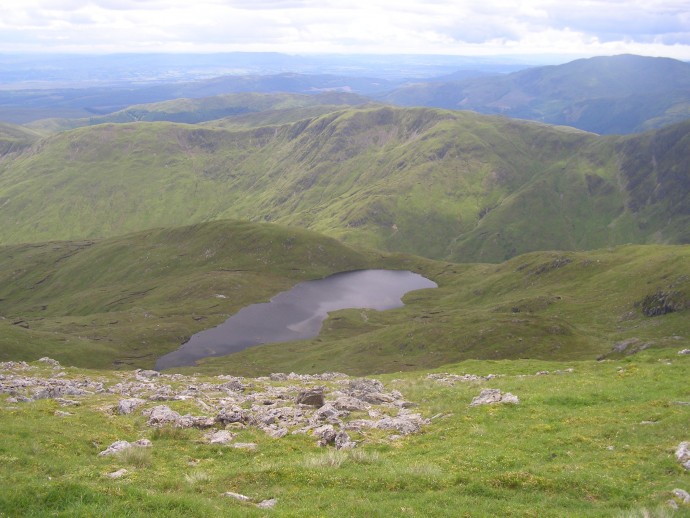 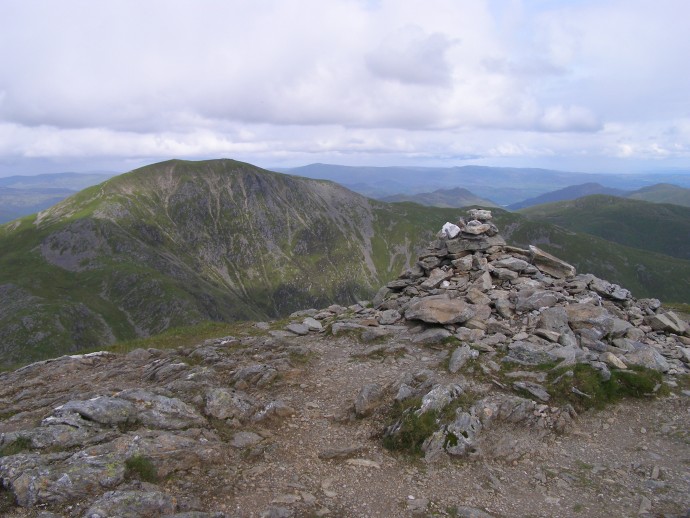 Cairn at top with Ben Vorlich 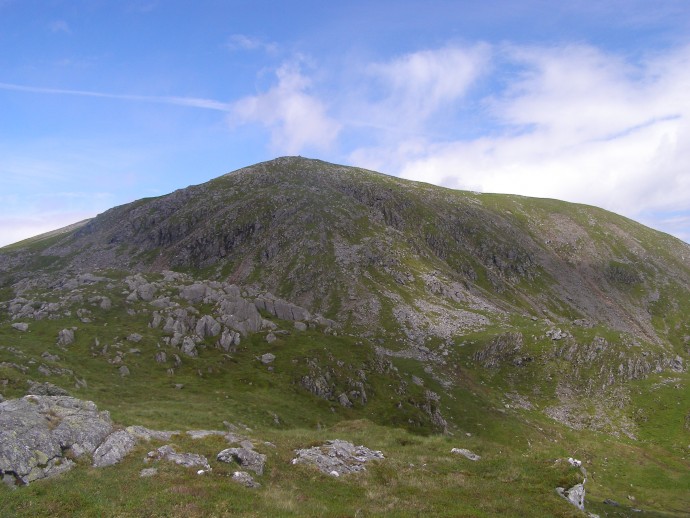 It's a beautiful day, Stuc a'Chroin on way down.

Back down same way, but cut across under the crags to join path further along. 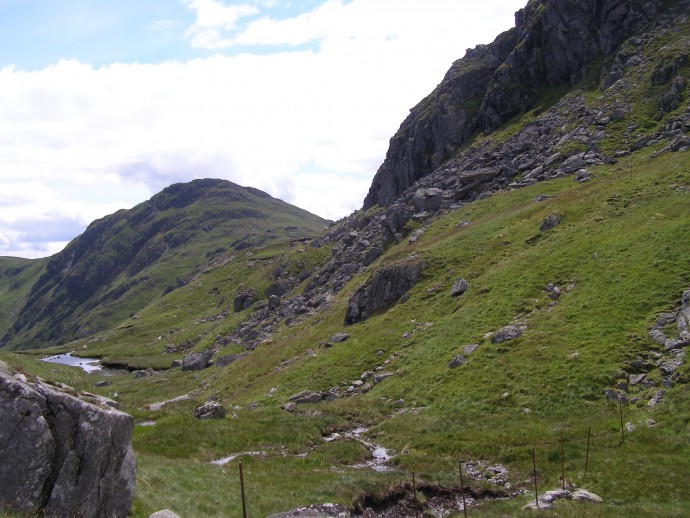 The route taken back under the crags

Went back down same way I came up but cut further over and joined track at top of Glen Ample. The walk back from here was hot as the fiery object was back out in force and no wind down here.Some burn water over my bald head to cool down.

Glad to get back to the car, was a long exhausting day.

It's great to see the views on this walk as it's one I fancy doing when I don't want to drive too far. Cheers for the pictures and the description.

So thats what it looks like, I had zero visibility when I did these recently, but did have glorious weather walking back to Callender thru Gleann a'Chroin.
That fence line was a godsend in the clag.
Nice phots, cheers.

I was on nearby Ben Vorlich that day, celebrating my birthday, - had you come across to join me I would have offered you some cake


can't believe how good the weather was after so much rain

sunbathed on the summit

I did these on that brutally hot Saturday at the end of May, still got the sun tan to prove it!
That walk out is a roasting sun trap, who needs Spain!

Did anyone look at you funny when you left Stuc, but not in the direction of Ben Vorlich??? lol