I Coullin't have asked for a better day on Rum!

I Coullin't have asked for a better day on Rum!

Corbetts included on this walk: Askival A Small Isle it may be, but not in heart or character! A jewel, this green little thing called Rum. This is my fourth day on the island, and the third day of walking. Off to the Cuillin it is! And again I’m lucky: sun’s out, a fresh breeze, absolutely brilliant walking weather. I’ve learned from Tuesday’s Orval summit fail: from now on only fun scrambly ridges and sharp peaks for me; no more big fat blobs of hills with thigh-high tussocky grass, bog and not a summit cairn in view. That means Barkeval is out. Also, no more biting off more than I can chew; there’s a fine line between challenge and suffering and on your own when exhaustion sets in it's not nearly as much fun. That means keeping today’s walk doable and enjoyable, so I’m only doing two peaks, the big pile of rocks that is Hallival: and sharp-edged Askival, the only Corbett of the lot: I used the walk description as in the new Cicerone guide to the Small Isles, supplemented by a couple of walk reports from here on WH, and ranger Mike’s description here on the wall of the hostel. Getting to the Cuillin is very straightforward: the path starts at back of the castle, runs along the stream all the way up to the corrie below the bealach that separates Barkeval and Hallival. You cross the stream at an old stone dam (pretty much impossible to miss) and either turn right up to continue up along the stream on an at times very boggy and unclear and at other times very eroded path up to the middle of the bealach. I took that route on the way down. The other option is to not turn right after crossing the dam, but go straight (and away from the stream) for a 100 meter or so until you pick up a path that skirts the corrie on the Hallival side, which peters out pretty soon but if you keep going you end up on the bealach closer to Hallival. In clear condition you’ll easily spot this path while standing on the stone dam, but a guy who went up two days ago in fog missed it. The bealach on the side closest to Hallival is a bit of a lunar landscape with nothing much growing there, just masses of boulders lying around. It’s easily crossed and it looks kinda cool! Also your first full view of Hallival. This peak is visible from Kinloch but disappears behind a minor hill once you get closer to the corrie.

And in a leisurely hour and half you find yourself from Kinloch at the bottom of Hallival! Now only to go up. Seems I have a nack for losing paths. Met a guy in the hostel after the walk that swears he had a path all the way up to the top (though a rough one). A path? Oops. I thought there wasn’t one and just hauled myself up an endless pile of boulders from the bealach (that’s pretty much what Hallival is after all, isn’t it?) till I reached the summit. This was loads of fun and not so hard

The views from Hallival towards the rest of the Cuillin are amazing (see the picture at the top of this report). Barkeval looks like a bit of a boring blob, but it completes Atlantic corrie quite nicely: Back towards Kinloch and Skye: Looking towards Kinloch and Skye in back from Hallival summit Lakes near the Cuillin

A beach on the Eastern side: Beach along the East coast from the summit of Hallival

Same on the way down. The description said there’s a path down towards the bealach between Hallival and Askival that avoids most of the crags on the South side of Hallival, but the only thing resembling a path I saw led me right on top of them. Again: Oops.

I did, however, find the ridge path between Hallival and Askival. The only way to miss that one is if you’re not on the right hill!

Totally loved the insane drop on both sides of the grassy ridge: Half way (it's a bit hard to make out, but that bit of grass is all there is to the ridge; had to be careful when running back to the right spot after setting the 10 second timer on the camera Askival Ridge with Eigg in the back

Looking back down from where I've come: Looking back down from above the pinnacle on Askival

Once you get below the first of Askival’s two pinnacles the path goes off to the left (East flank) and according to the walk description in the Cicerone guide it goes around more or less level until it starts climbing, “its progression upwards marked by a series of cairns.” Well, I don’t know which hill they were on, but I didn’t see any cairns. In fact, I didn’t see much of a path after a while! It seemed to suddenly do a magical disappearing act. I was on it, and then I wasn’t. Leaving me in between the manx shearwater holes and wondering where to go next. I ended up just climbing straight up from there as I was afraid I’d bypass the whole darn hill otherwise and would end up on the other side having completely missed the summit! After missing out on Orval I sure wasn’t going to risk not getting to the summit of this one, the only Corbett on the island. Me climbing up the flank did of course kind of defeat the purpose of taking that path in the first place, which was to bypass the scrambly bits, but this turned out to be lots of fun so I’m not complaining

The gabro (sp?) is awesome stuff to climb on, so grippy. Only issue I have with it is that my fingers are all rough and it’s taken a good layer of the vibram soles of my boots. Bit of pinnacle on Askival

Made it up onto Askival: Askival summit cairn and Eigg and Canna in the back. 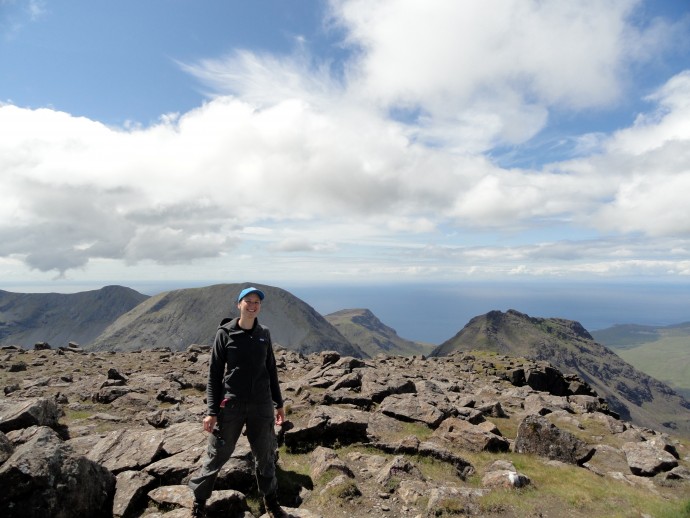 I have a feeling the mad gorgeous views might have been involved in me missing the right twists and turns of the paths up here. I felt like I could see the whole world around me. The whole of Skye laid out in front of me, all the Cuillin clear, Red and Black: The 'other' Cuillin in the distance I recognized quite a few of the mainland hills and sea Lochs. All the Western Isles, from Lewis to tiny Barra:

Western Isles in the distance

And of course the other Small Isles closer by:

And then Rum itself, all its glens and and its Cuillin… Ainshival and Sgurr nan Gillean shimmering in the sun (quartz?): Shiny Ainshival and a bit of Sgurr nan Gillean Then there were the Guirdil hills a bit further off… As much as I liked my two days frolicking about over there, my nemesis of two days ago, Orval, can shove it’s summit cairn up its... I was glad to see from on top of Askival that from this angle it’s just a blah-looking lump of a hill, really. Not even going to post a picture of it. Ha!

I went back down Askival intending to find that path I’d missed, and did end up finding one. However, that ended up being the one that went straight to the top of the pinnacles, haha! Was a good viewpoint, but I’m not an idiot, know when I need to recognize I’m not experienced enough, and dropped back a bit and climbed down around the side.

In the end I realized that on a day like this (perfect) on a hill like this (perfect) and feeling as I did (perfect) I didn’t need that path and just made my own way back to the grassy ridge. At the end of the ridge, back on the bealach between Hallival and Askival, I descended a little way into Atlantic corrie and skirted Hallival on the inside, to gain the other bealach (took me about half an hour). From there I dropped back down to the stone dam and walked back to Kinloch. Or I should probably say, skipped back down with a big smile on my face

This is one happy girl tonight! Took me 7 hours and 30 minutes from the castle and back, and that’s including two 30 minute summit breaks and many many picture breaks (took almost 300 photos!). I couldn’t have asked for anything more. It was all I dreamed of. And some day, when I'm all grown up and experienced, I'll come back for the other four hills.

Wants me to get over there, not been to Rum yet

You had me laughing reading that, happy your having a great time over here

great pictures and geat report again Lenore ....but dont ever think of growing up ,it takes the fun out of things

Fine report and pics Lenore! Well done and it looks a fab place to visit!

. I was on Skye last week and Rum looked awesome

enjoyed your report Lenore- Rum will draw you back - I had 4 memorable days of rain, mist, & wind there last november...

Lenore, your talent for finding great conditions on Scotland's mountains is only matched by your reports and your photos!! I am so pleased for you that you had a such a happy visit to Rhum. Pure entertainment!

Thank you for all the wonderful comments!! As I'm traveling alone it's even nicer that I get to share some of my adventures on this site and get your kind feedback

Though 'traveling alone' is hardly a correct term - I've met so many awesome people in Ratagan and on Rum so far. Many late nights