Looking to walk 20-30miles in one trip (building up to 45 in a fortnight!) I decided to mix my training with my favourite pastime and stretch the miles out over a few hills rather than a flatter, cross country walk

I drove up after work, arriving at 9.30pm and found a nice spot to camp just before Cluanie Inn. All my prep was done and I just needed to crash for the night, alarm set for 4.30am By the time I was up and ready, inc way too long spent trying to get the pop up tent folded up again

I set off along the road at 5.40am with my new boots in my backpack, wearing trainers for this part of my route. Knew I wasn't power walking at my top speed (not used to carrying such a heavy pack!), but I was still surprised it was 8am before I arrived at the start of my hill route! I hadn't made time to enter the route in my gps but with rough measuring on the map I figure this part is almost 13km. Forcan ridge ahead! getting brighter :) clear sky from start of route to The Saddle

From here I followed the WH route up to The Saddle and across to Sgurr na Sgine. jumped when I saw the deer - they were close! across The Saddle - looking back to summit from trig heading for Sgurr na Sgine next At this point I was starting to rethink my plans... taking so much longer than I'd thought! I was counting around 9hrs for the South Glen Shiel, since I'd be starting on the ridge rather than from the road. I was only on the second top though and still had a corbett to get over before reaching that ridge!

Going for the cobett(s) anyway, I carried on. Keeping a straight path from the summit I could see sheer rocks going down before me. Hmm, choice of going back the way I'd come to pick out a less steep route down this hill to get around to the corbett, or the way I went - pretty much straight down to the left side of the crags

It was raining by now so I put waterproof trousers on; just as well as I spent much of the route down sliding (bum slides in the summer! around the rocks then straight down the mossy grass :D looking back to Sgurr na Sgine - I was right not to go straight over! 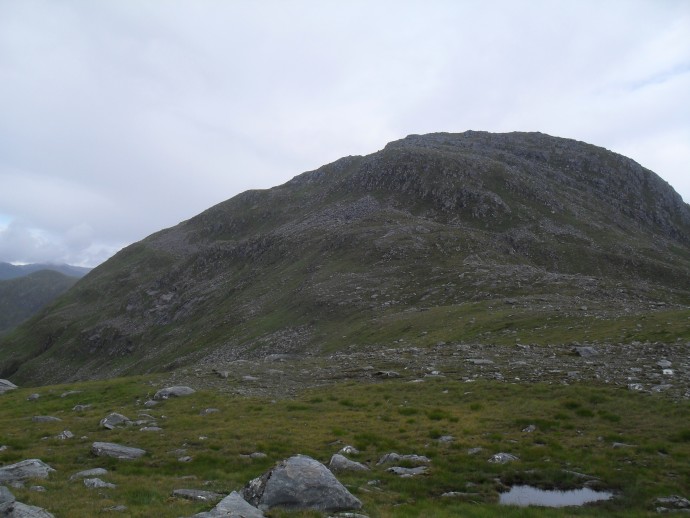 Heading across to the corbett I aimed for what looked like it might be a path going across about half way up (if it was I never found it!), then picked out a grassy route between rocks to get to the summit. Forcan Ridge now looks so far away from this corbett summit! 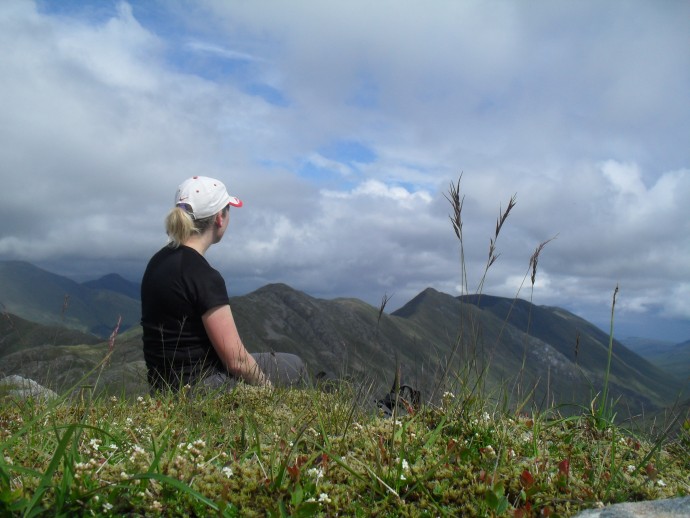 At this point I really had to stop and think! If I carried on with my original plan it would be midnight at least before I got back to the car

or I could go over to Buidhe Bheinn for the other half of this corbett then back over here to take the path back to the road. I really didn't fancy the long road walk again though, so knowing my car was at the other end of that ridge ahead, I decided to make a start along it and see how far I got. I knew there were escape paths I could use to get back to the road before the end of the ridge so wasn't committed to the whole route by starting along there. I did have my head torch but didn't fancy finishing in the dark while raining - I still had to pitch my tent again (was planning to find another camp spot for tonight). So I made a start on the South Glen Shiel Ridge 4.25pm: first exit path - no thought needed, still plenty time to carry on along the ridge :) My legs were starting to tire by now and it was 11hrs since I'd left camp this morning. At this point I decided to head down on the escape path at Sgurr Coire na Feinne, working out I'd get there by 7.30pm. That gave me a milestone I could push myself to, and I'd still get my target mileage out of today's walk by finishing off with the shorter road walk. Water was running low (no streams for refilling up here!

) and I was starting to see 'stars' when I looked up at the skyline. I still had plenty snacks and glucose sweets though and got there 20mins ahead of my guesstimate missed top of Sgurr Beag, taking path across hillside instead Forcan Ridge lit up in distance; have I really come all that way?! :D view to Sgurr an Doire Leathain - just one more ascent! :) exit path ahead! ...but the next top seems so close (NO! enough already!!) :D route down (saw more deer on the way!) So I got back to the car just beyond the Cluanie Inn at 9.10pm. With no phone signal and no pay phone at the Inn, I drove on towards Fort William. Running out of daylight, I pulled up in a layby and camped out again - slept til 9am!!

Fantastic adventures on this trip (including ice wall climbing at Kinlochleven the day after this epic walk!), I feel I'm ready for my charity hike in a couple of weeks - it doesn't even cross any munros or corbetts! Shameless plug if anyone would like to help me raise funds against poverty

Every time i think i'm pulling away from you, you do something like this!

You should've done it the other way round, that way you'd be on your hands and knees at the end not the start

I found the Forcan ridge such an adrenaline rush, thats what zapped your energie!

Superb walk Fi. Shame about the rain. Looks like you should be in top form for your charity walk.

looks like your ready for the charity walk,i'm sure you'll breeze it!

Superb effort Fi,the Forcan ridge would have been plenty for me likes

Thanks all - feeling quite happy with the big hike looming, even thinking of going up a day early to summit Cairn Gorm first.. thinking I'm invincible now!

Really appreciated the rain Monty, esp when I thought I might run out of water

Hope your feet have recovered too Iain; hadn't thought of Fannichs when planning my long route (sucker for a challenge, I'll now be looking at the 9 together when I get to these hills!

Forcan Ridge was amazing Pigeon, glad it was clear when I was on there

WOW - that is some effort Fi, (love the title) early start and walking the entire day and then some

brilliant. The reason those deer were so close is that they didn't expect to see anyone so early in the morning

Good luck with the charity hike...it might seem a bit tame compared to this

What an achievement! A long one and that scrambly bit looks awesome but a bit daunting!