It was with huge reluctance that I dragged myself out of bed at 5am. I am unsure if this was due to the dark and cold morning or the fact that my days hiking was going to be some of the Munro’s in the vicinity of the Glenshee ski centre. My spirits soon lifted as I drove north up the A93 and watched the amazing sunrise and by 7:45am I was parking up in the laybay south of the ski centre near the foot of Meall Gorm.

The plan was to head up towards Meall Gorm and then over the summits of Creag Leacach, Glas Maol, Cairn of Claise, Carn and Tuirc and then drop down to the A93 and hopefully hitch a ride back to the car.

Leaving the car, I followed the Allt Coire a’Bhathaich for a short while and then took a direct route up the hillside to the summit of Meall Gorm. From here I climbed up the hill and soon I was on the summit of Creag Leacach. The sun was now glowing in the blue sky and the view of the snow covered tops was amazing. Following the wall I headed on towards the frosty summit of Glas Maol. It was just cold enough to have frozen the ground but not to the extent that you needed crampons. Exactly two hours after leaving the car I was sat on the summit of Glas Maol with a cup of hot vimto in my hand, happy days! The frosty summit of Glas Maol Looking across to Cairn of Claise from Glas Maol Looking back towards Glas Maol from Cairn of Claise

Refreshed, I set off towards Munro number three, Cairn of Claise and as I reached the summit another couple had just beat me there having ascended up towards Glas Maol from the ski centre. Their destination was Tom Buidhe and they invited me along with the generous offer of a lift back to my car at the end. There is no doubt that a lift in a warm car would beat trudging along the A93 but I had already climbed Tom Buidhe and I really wanted to put Carn an Tuirc ‘to bed’ as well.

Wishing them well I left the summit and crossed the boggy plateau towards Carn an Tuirc. This would be tough going in the rain but the over night frost had frozen ground so I enjoyed a quick and dry walk across and up to the summit 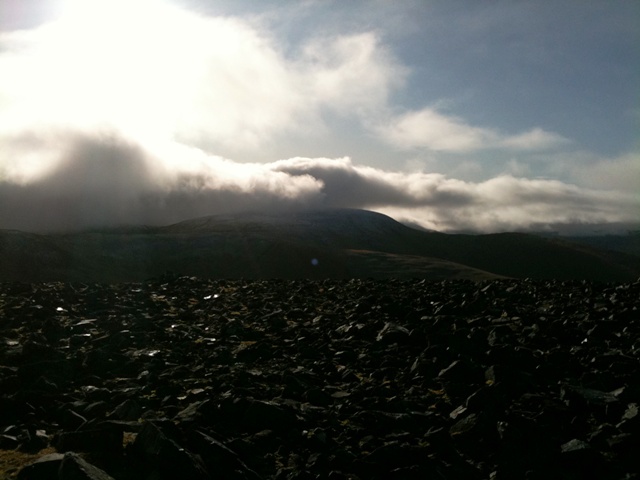 It was now noon and I had made really good progress, four Munro’s in four hours – great news. Heading down to the A93 I knew that I had a 4km walk back to the car along the road and I contemplated eliminating some of the walk along the road by climbing Carn Aosda and The Cairnwell. This was soon dismissed as I looked back towards Glas Maol and cloud was already beginning to draw in. By the time I was hiking up the A93 towards the ski centre the summit of Carn Aosda was also covered with cloud. I decided to quit whilst I was on top and headed back to the car.


GlensheeRoute.gpx Open full screen  NB: Walkhighlands is not responsible for the accuracy of gpx files in users posts

Curly Wurly wrote:I contemplated eliminating some of the walk along the road by climbing Carn Aosda and The Cairnwell. This was soon dismissed as I looked back towards Glas Maol and cloud was already beginning to draw in.

It's amazing how a dusting of frost or snow completely transforms the mountain environment.

Did you ever get your lift or did you have to hoof it back to the car?

and whilst there was enough time to climb Carn Aosda and The Cairnwell, I would not of had enough time to do Carn a'Gheoidh so I would have to return anyway to do that so i thought i may as well do all three in one go another day.

Miserable lot not stopping. I wonder how many people actually stop to pick up muddy wet walkers though, even if it is for a couple of minutes.

Hi Curlywurly,
I done these plus Tolmount and Tom Buihde last month. Unfortunately i was in the clag for most of the way round so its nice to see what it looks like in the sunshine.

Miserable lot not stopping. I wonder how many people actually stop to pick up muddy wet walkers though, even if it is for a couple of minutes.

I used to drive around the West of Scotland chuckling at those crazy people with big rucksacks and walking poles going along a road in the middle of nowhere! Thinking about it though- very few of them were actively thumbing a lift - and those that were got a thumb up in reply from me as I whizzed past!

Indeed, it was the fact of letting a muddy wet walker into recently valeted car that made me do that! I'd be a lot more welcoming to them these days now I'm one myself