Our annual summer trip to sutherland is and excellent excuse to get out and enjoy the mountains of the far north. Plans had been made for a Arkle - Foinaven wild camp but sadly the weather refused to cooperate and we abandoned such plans. After a MWIS forecast suggesting a high cloud base we decided to head west to Quinag.


We set of at about 8:00 with the cloud half the height it had been predicted at, as per usual. The walk up Spidean Conich follows the path into the coire but turns of just before a small lochan on your left. From here the slope up is a fairly constant gradient with large slabs of rock that give very pleasant walking. From here the summit is reached after going over a small bump and following the cliffs on the right hand side. Just before the summit is reached a gully has to be detoured round that would i assume give great views down the way to the bottom of the coire. This was the point at which my dad felt it proper to remind me that he doesn't like heights or narrow ridges, a fear i had only learnt about on the summit of Sgurr and Fhidhleir. The summit is ringed on three sides by crags so once on it you have to head west before turning slightly east again to descend off it. From here there is the only real narrow section of the walk but it is simple enough as there was little wind and no scrambling is required. Another bump must be ascended and the descended before the Bealach a Chornaidh is reached, at this point we were just below the cloud base and so you could see out over parts of Assynt and out to sea. The unnamed central top could also be seen as the cloud raced by in the strengthening winds.

View out over Assynts many lochans

Looking up at the unnamed peak.

The climb up is steep but fairly short. By now the cloud was hammering by at a fair pace and you got the occasion glimpse up through it to a far hight layer of cloud above. Just as we we reached the top we very briefly emerged above the cloud and in the distance the summits of suilven could be seen as an island in a white sea, sadly the cloud swallowed us again before a could get to a camera. Once over the unnamed peak there is a second smaller top that the path only partly ascends on the right hand side. Going over the top of this bump looks like it would require the only scrambling on the entire walk. Slightly further along the ridge to Sail Ghorm, The cleft is a large gully that is avoided on the right hand side.

By now the wind has picked up considerably and was blowing a good 40 -50 mph. thankfully the ridge out to Sail Ghorm is very wide and easily followed to the summit. Again lacking a view we quickly headed back and lunched in a sheltered spot just after that impressive gully. The unnamed top must be reascended at least in part before picking up a path 20m below it's summit that goes out along to Sail Gharbh This ridge is also very wide and gentle in it's angle of ascent and in 20 minutes the summit is reached. I again am assuming that on a clear day this peak would have stupendous views into both coires but i'll have to go back some day to find out. To descend retrace you steps until you reach the flat section of ridge before the unnamed top. There is a cairn just after a line of sandstone steps on the south side. This marks the start of a relatively steep descent into the southern coire . We once again dropped out of the clouds and the view over Loch Bealach Cornaidh and the Bealach its self were impressive. 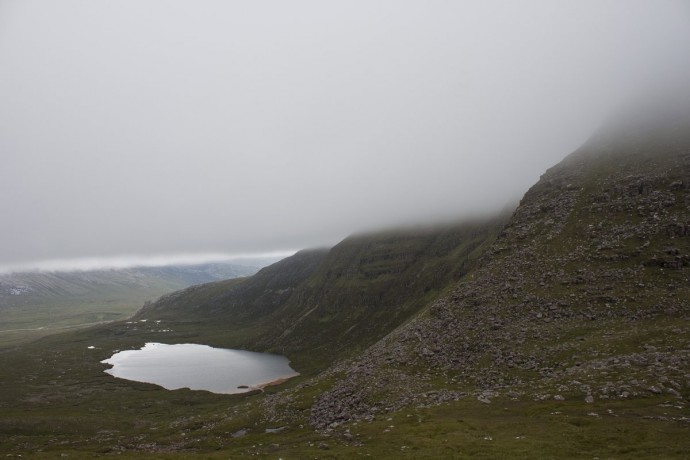 At the bottom of the descent the walking becomes easier and the path far more distinct. I made a short detour to the edge of the loch for some pictures while my dad continued downwards. From here Arkle and Ben Stack could also be seen, or at least the parts that weren't in the cloud.

The excellent path allows quick time to be made back to the car with a lovely final view of Spidean Conich up the Allt na Bradhan. After retuning to the car and our legs cursing the many ups and downs we drove part way to Kylesku for a view of the mountain that shows all three corbetts. With Spidean Conich on th left, Sail Gharbh central and Sail Ghorm on the right. It also shows the cliffs on the end of the Sail Gharbh ridge. The end of the Sail Gharbh ridge

The whole mountain, with each top visible

A definate Top5 mountain(s) Never tire reading reports about it. Cheers for the reminder