The plan was to complete a loop around the head of Glen Lochay with an overnight camp somewhere around Bienn Challum, while the hills don‚Äôt really form a natural chain I figured tackling them this way provided some added interest.

our_route.gpx Open full screen  NB: Walkhighlands is not responsible for the accuracy of gpx files in users posts
Set off from the car park at around 10:45 with low cloud stubbornly hugging the summits around glen Lochay.

At Kenknock headed north up the road over to Glen Lyon and at the bealach around +500m (NN 447392) I left the road and headed west towards Point 949m to the north east of Beinn Heasgarnich‚Äôs summit. It took 1 ¬Ω hrs of bog trotting and zig zagging peat hags to reach the ridge where a short stop for a late lunch was called for. The summit was easily reached after a short 40 mins climb; the cloud had lifted giving good views of the way ahead.

A good path led over Stob an Fhir-Bhogha before disappearing during the descent towards Creag Mhor. The direct ascent from the bealach to Creag Mhor is blocked by some quite steep crags so I bypassed these by swinging around to the north (right on ascent) to join the ridge from Meall Toinail, still a tough ~350m climb to get up to the ridge but once there easier slopes led to the summit. Headed west above Coire-cheathaich and around to Stob non Clach before descending south-west to more bog trotting across the bealach and another steep 150m ascent leading up to the ridge of Cam Chreag. I dropped the rucksack and a short trog of 5-600m led to the summit; I returned and set off south ‚Äì east; the descend to the bealach following the old fence line looked ridiculously steep so I bypassed the worst by swinging off to the north (right on descent).
Found good water but no good campsite at Bealach Ghlas Leathaid (+575m) so loaded up with water and headed off for the summit of Ben Challum; by now the legs were feeling quite weary after around 17km and 1500m ascent. As luck would have it found a nice camp site around 100m higher so elected to stop for the night at 18:30 with a strong westerly whistling past and the cloud sinking quickly.

07:30 everything packed, except the tent, and the morning sun seemed to be in with a fighting chance of clearing the clouds above the summits. 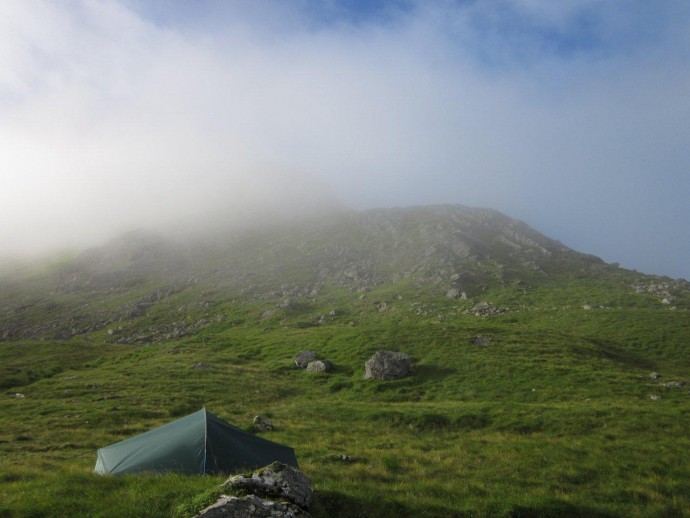 07:45 and I made tracks towards the summit of Ben Challum by its north-west ridge, in between the banks of cloud I could see steep craggy bits on the ridge above, I‚Äôd seen them the day before from across the bealach and they either looked to be by-passable or simple scrambles but time would tell.
While steep the ridge proved relatively straight forward, a grade 5 sheep track (quadruped tactics required) on the left bypassed all the bad bits. Once above the crags a straight forward yomp led up to the top which was now just at the base of the clouds and South Top was intermittently in view through gaps in the cloud. From South Top I descended to the south west following the normal ascent route before swinging off south east at around +700m, spooked a fox laying up in the grass (5m away) which took off like a rocket and seemed to clear 500m in 30 secs!
The crossing of the Lairig an Lochain (+400m) proved another great place for the bog trotting enthusiast and I was glad to finally reach the south west ridge of Beinn nan Imirean. Easy going up fairly gentle grass slopes led to the summit with a small cairn perched upon the summit rocks, time for an early lunch. The sun‚Äôs shining, a light breeze, 200m down, some more bog trotting, 300m up and it‚Äôs Meall Glas! The route ahead across Beinn Cheathaich and onwards to towards Sgiath Chuil clearly visible. Commenced the descent from Beinn Cheathaich by heading north down the ridge 2-300m before swinging east and dropping to more bog! Had look for an ‚Äòeasy‚Äô line or track ascending Sgiath Chuil from the bealach but couldn‚Äôt see anything so I just headed straight up; by the top of the 300m climb the legs were burning! Dropped the sack and skipped along the undulating ridge to the summit and a great panorama. Descended back to the valley along the north ridge of Meall a‚ÄôChurain follow a reasonable path to around NN 461342 where it disappeared in amongst the peat hags and bog. Finally just made a bee line across the bogs for the end of the zig zag track though the woods (NN 466 355) and got back the car park at 16:50.

read your report and loved it as i'm planning the same trip myself.but will camp 2 nights on route because of 300mile each way drive so won't get walking till lunchtime. cheers.