I set off from Fersit at about 8.45 on a cold and frosty morning. As I passed the last farm I received a bit of a lecture from the farmer about dogs and the problems they cause - a bit much really as I don't even have a dog.

I waded off through the bog and picked up a path alongside the burn which had some good waterfalls following all the recent rain. I by-passed the direct route up the nose of Sron Garbh-bheinne and gained the ridge a bit higher up. Loch Laggan was a bit lost in the mist 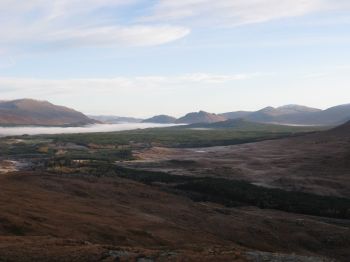 and but got a brief glimpse of Lochan Coire an Lochain 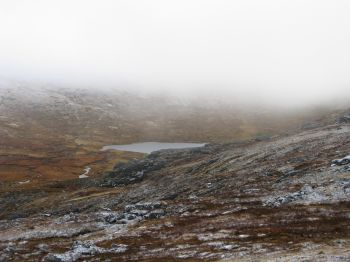 before I was engulfed in clouds. The sun was struggling to come through and after just over two hours I reached the summit cairn of Stob Coire Sgriodain. 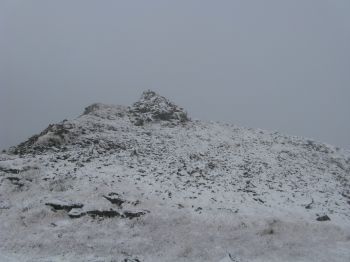 I couldn't see very much as I set off towards Cnho Dearg. Although there was a thin covering of snow the path was reasonably clear, initially due south and then it descends south-east to a bealach. The cloud drifted in and out and I was soon at the large cairn at the next top, at 958m. Then down another dip and up to the next top before descending to another broad, boggy bealach. From there I took a direct line to the summit of Meall Garbh. The weather had cleared up considerably by this time and I could see the snow-covered slopes of Chno Dearg and beyond it Lochan na h-Earba. 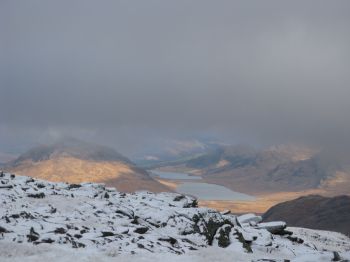 After a quick lunch I gained the summit of Chno Dearg and then made a bee-line down to Fersit. I must admit I was heartily sick of bog by the time I got back to the track.

I didn't see anyone else all day.

bootsandpaddles wrote: As I passed the last farm I received a bit of a lecture from the farmer about dogs and the problems they cause - a bit much really as I don't even have a dog.

I had a similar experience at Fersit when out with a friend (who did have a dog I must admit - I don't). She headed off (with the dog) while I sorted a couple of things out at the car. Guess who got the lecture