Whenever we walked in the Rothiemurchus area I would look at the sprawling mass of Braeriach and want to get up there.

Braeriach (one of Moira's pics taken earlier in the year) It was just a case of persuading someone else to come with me! Evelyn was up for it and we reckoned we had enough daylight at the end of September if we didn't waste time. We'd heard mixed reports about negotiating the Chlamain gap with tired legs on the return so decided to walk in from Rothiemurchus which is a longer but arguably easier route.

We parked at Whitewell and headed east for a short distance on a rough path which reaches a T junction to a better path where you turn right. This path leads to a crossroads of paths where you take a left turn past Loch Deo heading towards the iron bridge over the river built by the Cairngorm Club. Once over the bridge we followed the path south east and after a kilometre there is another crossroads where you turn right in the direction of the Lairig Ghru. Somehow or other we missed this turn (okay we were deep in conversation

) and carried on towards Loch Morlich. By the time we realised what we'd done and retraced our steps we had lost 20 minutes which later in the day turned out to make a vital difference.

The path gradually leaves the forest behind traversing the slopes high above the Allt Druidhe. After a couple of kilometres the path drops down to the burn and is joined by the path coming down from the Chlamain Gap on the left. We crossed the burn and headed steeply up on to the Sron na Lairig ridge. Path descending from Chlamain Gap on opposite side of Lairig Ghru Looking back to Rothiemurchus from Sron na Lairig 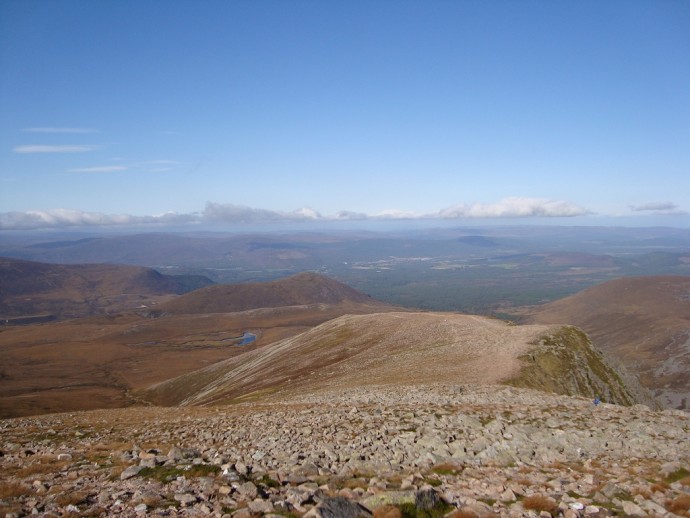 Evelyn was finding the climb tough going and couldn't get any speed up. I kept her in sight and waited for her to catch up but she felt she wasn't going to make it in the time we had.

We carried on to the cairn on Sron na Lairig and had some food but still she didn't feel she could do it in the time. We had worked out we needed to be away from the summit by 2.15 to be back at the car before we lost daylight. (This was before we had head torches and if we'd had them that would have made all the difference!) The 20 minutes we lost earlier also would probably have made enough of a difference for her to feel she could do it.

I'd been sitting there looking at the way ahead and itching to crack on. It was a beautiful day and there were other walkers about so I made a tentative suggestion. How would she feel about me going on as fast as I could if I promised to turn back as soon as it got to 2.15. She could then take her time going down and I would catch her up later. She said "Yes, go for it!" and I could have hugged her!

I didn't hang about and haired off with the dogs down into the bealach and up the wide then narrowing ridge to the summit cairn perched on the edge of the cliff close to an awesome drop. There was a strong wind at the top which makes the dogs look slightly flattened and I was careful to keep them away from the edge.

Dogs sniffing out crumbs dropped by other walkers at Braeriach summit There now follow various shots from Braeriach looking down into the Lairig Ghru. Apologies if I've posted too many but I can't decide which ones are best! Whale back of Carn a' Mhaim rising to Ben Macdui Since we had split up there was no question of returning via Gleann Einich as suggested by WH so I simply turned round and started the descent. I bombed down the path as fast as I could thinking Evelyn could already be near the car. I still remember the great feeling it was to find her sitting patiently waiting in a natural sun trap by the path on the Lairig Ghru! She had checked on me by asking other walkers if they'd seen a wifie with two dogs and I'd been spotted on the descent so she was reassured I wasn't far off. I know the advice is not to split up on hills but this time it felt the right thing to do. If I'd insisted we stick together that would have put a pressure on Evelyn to push herself when she wasn't feeling good. She has a lot of hill experience so didn't worry about being alone and she didn't want to hold me back so it seemed the best solution. At any rate I was very grateful to her for being such a good sport letting me get to the top!

We enjoyed the return walk, despite another wrong turn in Rothiemurchus which in the gloaming cost us about half an hour!

Moral from this is you're more likely to make a navigational mistake when you relax because you think you're home and dry! Despite that we reached the car before we completely lost light.

Now Evelyn is looking for a companion to have another go at it!

what a beautiful day you had for it.

Loving those photos of the Cairngorms

Apart from a strong wind on top it was perfect - and midge-free.

morag1 wrote:Always thought Braeriach was one of the harder Munros so well done on climbing this "solo"

The thing is Morag when I have the dogs I never feel alone. I didn't find it a hard hill to climb but it was a special feeling to be the only one standing at the top of a hill like this!

Braeriach is worth saving for a good day. I always wondered which is the best way to climb it (and the shortest

), eventually we picked the route from Sugar Bowl through Chlamain Gap and really enjoyed it. We were lucky to still have quite a substantial amount of snow on the summit though it was half June.
The vast emptiness of the Cairngorms always gives me the feeling of total freedom, especially when there's nobody in sight. Wish I could climb more hills in this area this year but the weather hasn't been up to it lately... Wouldn't fancy getting lost in the cloud on the featureless plateau

Hopefully we'll get some proper Indian summer and we'll be able to enjoy more walks like this.

Enjoyed reading that, and some fine piccies as well

The route I took when when doing the full round. I remember standing atop Braeriach looking looking towards the next three and thinking- is it possible today? a coat of white most of the way

It is a stunning place no matter the conditions underfoot

My dozy pair have not been up in the Cairngorms, but may remedy that for our hols next year- plans are afoot

Good report i m yet to get into the Carn Gorm

Yeh....Braeriach, definitely again for me one day

Valerie and Ritchie haven't been up there yet, and I walked in from Derry Lodge and Cairn Toul a few years back. So from the north it will be next time, perhaps with a wee touch of winter

I've enjoyed reading your report and seeing pics of the Cairngorms again. Braeriach is probably my favourite mountain, there's so much more to it than most people ever see. My first ascent was by Chalamain gap - return same way. Next was throught the Lairig Gru & onto the plateau from the Garbh Coire, camped next to the Wells of Dee & returned via Chalamin Gap. The route up Glen Einich, via Coire Dhondail is also good, but my favourite has to be from Glen Feshie, crossing the Moine Mhor with views down Loch Einich. A remote and beautiful part of Scotland. We have plans to camp out on Braeriach again sometime.

BlackPanther wrote:Hopefully we'll get some proper Indian summer and we'll be able to enjoy more walks like this.

Indian summer to make up for not having a summer?

Sounds fair to me!

soulminer wrote:My dozy pair have not been up in the Cairngorms, but may remedy that for our hols next year- plans are afoot

Your impressively switched on collies would love it up there.

I was climbing Slioch today and trying to match your pics but weather wasn't playing ball - despite 90% from MWIS!

Collaciotach wrote:Good report i m yet to get into the Carn Gorm

Look forward to some history on that area when you get round to it!

I was at work thinking about climbing anything at all !!!!

Hope to see your efforts in report form soon. Cheers.

I was at work thinking about climbing anything at all !!!!

Hope to see your efforts in report form soon. Cheers.